A prototype xeroscope for the noninvasive measurement of tear-breakup time

THE TEAR film is a complex composite whose components have multiple sources, which include the lacrimal
glands, meibomian glands, goblet cells, and accessory lacrimal glands of the ocular surface. Its functions include lubrication, protection from disease, and provision of nutrition for the cornea. It also plays a critical role in the optical properties of the eye.1 It is has three major components, namely, lipid, aqueous, and mucin. The condition of the lipid layer determines the predisposition of the tear film for rupture. The middle aqueous layer contains soluble mucin and proteins that turn into a hydrated gel essential for maintaining high-quality vision and ocular comfort.1 Maintaining a healthy and comfortable ocular surface requires stability and constant renewal of the preocular tear film. Eye disorders that disturb tear volume, composition, and hydrodynamic factors can threaten this stability. An unstable tear film is the hallmark of various dry-eye states.1 Patients with mild tear-film instability complain of annoying eye irritations. Those with severe tear-film instability may experience constant and disabling eye irritation, and develop ocular-surface epitheliopathy. Measurement of tear-breakup time (TBUT) using fluorescein dye is the most widely used clinical assessment of tear-film stability. Originally described by Norn as “wetting time,” this test involves observing the cornea after a complete blink, and measuring the interval from that blink to the first evidence of a discontinuity in the tear film. This is most easily visualized by instilling 0.1% sodium fluorescein into the conjunctival cul-de-sac. The patient is then asked to blink several times to assure mixing of the fluorescein with the tear film. The clinician examines the precorneal tear film with a slitlamp using a cobaltblue filter. The TBUT value is the time, in seconds, from blink to the appearance of the first dry spot. Values below 10 seconds are generally considered abnormal.2 Measuring TBUT using fluorescein is inexpensive, readily available, and easy to perform. On the other hand, instillation of the dye may alter the physiologic composition and volume of the tear film, as well as induce reflex tearing, affecting the real or physiologic TBUT. Thus, it is classified as an invasive type of measurement. Xeroscopes have been developed to measure TBUT noninvasively. The Keeler Tearscope Plus is a commercially available device that can estimate tear-film quality, quantity, and stability. It is designed to avoid any disruption of the tear film during examination and to give a single view of the whole cornea. Goto and colleagues evaluated the videokeratography machine, which is used for corneal topography, for the measurement of TBUT. Results were consistent with those of the standard fluorescein TBUT.3 All these sophisticated machines use placido rings or grid lines projected onto the corneal surface to measure tear-film stability. Their advantage is that they are carried out in a noninvasive, objective, and reproducible fashion
with significantly increased sensitivity. These machines, however, are very expensive and are neither practical nor readily available to most ophthalmologists. Using the same basic concept behind the tearscope and videokeratography machines, this study proposed a prototype xeroscope using readily available materials as a
simple, noninvasive, and inexpensive alternative to measure TBUT. It used a simple flashlight as a light source
and placido rings were projected on the corneal surface. Time to appearance in distortion of the projected rings is hypothesized to be equivalent to breakup time of the preocular tear film.

Fifty patients (100 eyes), 21 years old and above, with no apparent ocular pathology except error of refraction
and cataract, were enrolled into the study. Patients on any topical ophthalmic medications, using contact lenses, those with ocular-surface disease (blepharitis, meibomian gland dysfunction, Steven-Johnson syndrome, chemical burn, etc.) or eyelid abnormalities (ptosis, blepharospasm, ectropion, entropion, trichiasis, coloboma, etc.), and those who had any form of eye surgery or eye trauma were excluded from the study.
The procedure was thoroughly explained to all subjects. Informed consent approved by the Institutional Review Board was obtained prior to performing the tests. A series of 6 concentric rings, each with a thickness of 1 mm, and separated from the next by 1 mm, were printed over acetate using an inkjet printer. The print out was then cut to fit the front surface of a 3v flashlight, whose diameter measured 3.6 cm (Figure 1). The cut-out was placed in front of the flashlight, which was fastened to a stainless gooseneck measuring 2 feet, to allow the flashlight to be bent and subsequently be positioned at the desired location in front of the subject’s eye (Figure 2). The gooseneck was fixed to a 2.5 cm x 10 cm x 22 cm base made of gauge15 galvanized-iron sheet. This base was then positioned beside the slitlamp using a table clamp (Figure 3). Each patient was positioned in front of a D7 Topcon slitlamp biomicroscope set at 10x magnification (Figure 4). The subjects were asked to make a complete blink and keep their eyes open. The eyelids were held open by the examiner to prevent reflex blinking. They were then instructed to fixate at the center of the prototype xeroscope, which was positioned in front and slightly temporal to the eye. The examiner viewed the projected placido rings through the oculars of the slitlamp focused on the corneal surface. The only light source was the prototype xeroscope (Figure 4). The timer was started after the patient blinked. The 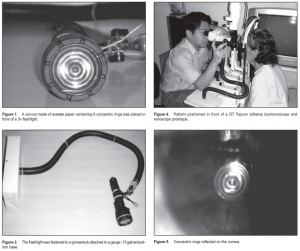 Fifty patients (100 eyes), 18 males and 32 females, completed the study. All subjects had no apparent ocular
pathology except error of refraction and cataract. The mean age of the patients was 51.74 years (range 23 to 76). The combined NIBUT for the right and left eyes ranged from 9.44 to 49.03 seconds, while the fluorescein TBUT ranged from 4.28 to 41.65 seconds. The mean NIBUT was 24.71 seconds and the mean TBUT using fluorescein was 18.63 seconds. The average difference between NIBUT and TBUT was 6.09 seconds. Figures 7 and 8 show a linear correlation between NIBUT and TBUT for each eye. When the TBUT value of an eye was high, a corresponding high value for the NIBUT was also demonstrated. Comparison of the difference between NIBUT and TBUT values of each eye was not statistically significant (5.92 for the right, 6.24 for the left). This means that for the sample population in this study, we can more or less expect the same difference between NIBUT and TBUT regardless of which eye was tested. There was also a significant correlation between the right and left eyes for both NIBUT alone and TBUT alone

Tear-film instability is one of the hallmarks of dry-eye syndrome or dysfunctional-tear syndrome. An unstable
tear film can lead to ocular-surface damage and inflammation causing visual symptoms, as well as ocular symptoms of discomfort and irritation. Being able to measure the stability of the tear film accurately is, therefore, essential in evaluating the health of the ocular surface. Measuring tear-film stability by invasive techniques such as the fluorescein TBUT test is easy to perform and widely used by most clinicians. However, variations in pH and concentration of the fluorescein dye, volume of instilled drops, and the presence of preservatives are factors that alter tear physiology and yield variable results.4 The manner in which the test is performed can also significantly influence its outcome. For example, holding the lids apart stretches the tear film, resulting in faster breakup. Air currents, slitlamp-heat intensity, and other factors also affect results. In our study, we tried our best to prevent these factors from affecting the outcome of our tests for TBUT by instilling a constant volume of liquid dye, which we prepared ourselves (0.1ml of 0.1% solution). This enabled us to at least control the concentration and volume of the solution we used as against using fluorescein strips in which we cannot quantify exactly how much dye is contained per strip and how much dye is instilled on the eyes. Tests for each eye were also performed separately so as to prevent factors such as drying from prolonged lid stretching or unnecessary irritation from prolonged contact with the dye from occurring. Several noninvasive, reproducible methods have been developed to try to overcome the limitations imposed by invasive techniques. The NIBUT projects a regular image onto the precorneal tear film and looks for the first disruption of the image.2 A study by Mengher and colleagues of 33 patients (65 eyes) with varying severity (mild, moderate, and severe) of dry eyes and 66 age- and sex-matched normal subjects (132 eyes) showed that the critical value of 10 seconds for the NIBUT provides sensitivity of 82% and specificity of 86%.5 Hand-held devices employing this principle are commercially available (Tearscope Plus, Keeler) but are expensive and not readily available. Our study utilized a xeroscope prototype made from 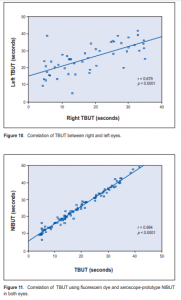 simple materials that can easily be obtained at a cost of less than PhP1,000. A linear correlation between fluorescein TBUT and the NIBUT was demonstrated with this xeroscope, indicating that it can be used as an alternative to the current standard for measuring stability of the tear film without the drawbacks of instilling fluorescein. It can particularly be used for evaluating patients with dysfunctional tear syndrome. The normal TBUT cut-off value of our prototype xeroscope is 16 seconds and greater. This value is the sum of the accepted normal cut-off value of the fluorescein TBUT (10 seconds) and the average difference between NIBUT and TBUT in this study (6 seconds). Our value is consistent with the normal value for NIBUT of 15 seconds based on a publication of the University of Illinois Eye and Ear Infirmary.2 In conclusion, NIBUT measurement using the prototype xeroscope has a positive correlation with the standard fluorescein TBUT measurement and may be a good alternative for measuring tear-film stability without disturbing normal physiology. Further improvement can be done on our prototype xeroscope with regard to the concentric rings to cover the entire corneal surface. Studies involving a larger number of subjects to include patients with dry-eye syndrome are recommended.

Kaice Cristobal, Clinical Epidemiology Unit, St. Luke’s Medical Center, for her invaluable assistance in the statistical analysis of the data.