DORZOLAMIDE hydrochloride is a carbonic anhydrase (CA) inhibitor formulated for topical use in the treatment of glaucoma. This drug is a potent inhibitor of carbonic anhydrase isoenzyme II (CA-II),1 found in the ciliary processes of human eyes,2 suppressing aqueoushumor secretion,3 thereby decreasing intraocular pressure (IOP).4,5 The corneal endothelium possesses CA-I and CA-II isoenzymes, both of which play a role in its pumping function.2 This pumping function regulates the flow of water into the corneal stroma. Two endothelial-pump mechanisms have been described to contribute to the relative dehydrated state of the stroma:6 the bicarbonatedependent Mg2+-ATPase pump,7 which utilizes both CA-I and CA-II isoenzymes, and the Na+ ,K+ -ATPase pump.8 The importance of these 2 pumps in stromal deturgescence remains unknown. Because dorzolamide inhibits CA-II isoenzyme, it may have a potential to interfere with the bicarbonate-dependent Mg2+-ATPase pump. It is, therefore, essential to assess any short- and long-term adverse effects of dorzolamide on endothelial function. The relationship of central corneal thickness (CCT) with IOP has been the subject of several studies. Patients with thinner corneas tend to have underestimated IOPs (their true IOP is higher than the measured value), whereas those with thicker corneas tend to have overestimated IOPs (their true IOP is lower than the measured value).9 Thus, CCT has become a significant factor in the diagnosis and treatment of glaucoma because a low CCT may lead to underdiagnosis and undertreatment while a high CCT may lead to overdiagnosis and overtreatment.9, 10 Because endothelial CA plays a role in the mechanism of fluid transportation, there is some concern that the use of dorzolamide may have a significant effect on the cornea and CCT. Corneas of eyes treated with dorzolamide were reported to be either thicker than those of untreated ones,11-13 to be slightly thicker,14 or to maintain the same thickness after treatment.15 In a study by Wilkerson et al., significant increase in CCT was seen after one month of instillation of the drug.11 CCT among different races was shown to be different.16-17 Among normal Filipino eyes, it ranged from 451.0 µm to 653.6 µm with a mean of 531.5 µm ± 33.8 µm. A significant linear correlation between CCT and IOP was also observed.17 It is possible that differences in CCT may affect patients’ responses to dorzolamide and the measurement of IOP. For the past 30 years, timolol has been the gold standard in the treatment of open-angle glaucoma and ocular hypertension. It has been compared with new antiglaucoma medications. Using timolol as the control drug, this study determined the effect of 2% topical dorzolamide on the CCT of glaucomatous eyes of Filipinos. It compared the effect of dorzolamide versus timolol on CCT and endothelial-cell count after one month, and correlated CCT and IOP measurements.

We performed a randomized controlled trial at the Glaucoma Clinic of the Sentro Oftalmologico Jose Rizal,
Philippine General Hospital. The study population included 37 eyes of new and follow-up patients, 18 years
and above, diagnosed with primary open-angle glaucoma (POAG), ocular hypertension (OHT), normotensive
glaucoma (NTG), pigmentary glaucoma, or pseudoexfoliative glaucoma (PXE), with or without medications, and with a cup-disc ratio of <0.8 and visual acuity of 6/60 or better. Excluded were patients who underwent incisional laser and refractive ocular surgery; have corneal disease or injury; have history of recent contact-lens wear (within one month); and have contraindications to timolol or  dorzolamide use; and female patients who were pregnant, breast-feeding, or taking oral contraceptive pills. All patients underwent an ophthalmic examination that included best-corrected-visual-acuity testing, refraction (upon enrollment), applanation tonometry (3 determinations taken at the same time of the day on all followups), slitlamp biomicroscopy (lens evaluation upon enrollment), gonioscopy (upon enrollment), and opticnerve evaluation (upon enrollment). The same Goldmann tonometer (Topcon Corp., Japan), specular microscope (Rhine-tec Sea Eagle Enothel, Krefeld, Germany), and ultrasound pachymeter (Quantel Medical, Cedex, France) were used for all measurements. Endothelial-cell count was determined by specular microscopy and CCT by ultrasound pachymeter prior to instillation of glaucoma medication. Each patient was followed up by the same physician/technician throughout the study and at the same time of the day to eliminate the effect of diurnal variation. Patients who were on topical antiglaucoma medication underwent a wash-out period of 3 weeks for β-blocker and prostaglandin and 2 weeks for α-adrenergic and pilocarpine. At baseline, patients were randomized to either 2% dorzolamide twice daily or timolol twice daily. Since the investigators were masked as to the treatment, a noninvestigator was assigned to hand out the medication to the patient. The drug was instilled at 6 a.m. and 6 p.m. To continue receiving the study drugs as monotherapy, adequate ocular hypotensive effect must be demonstrated, defined as IOP of less than 21 mm Hg or a decrease of at least 15% from baseline without medication. Patients who failed to exhibit this magnitude of efficacy at any time during the study were excludede and given a second medication or shifted to another drug The outcome measures included CCT, endothelial-cell count, and IOP. Endothelial-cell count was determined upon enrollment and after one month of treatment. CCT and IOP were determined at baseline, day 1, week 1, week 2, and week 4 of treatment. Only the results of one eye of each patient were included in the statistical analysis. Descriptive statistics included measures of central tendency (mean and standard deviation). Tests of homogeneity of sample included chisquare for categorical variables and independent t-test for continuous variables. Within-groups comparison included Wilcoxon signed-rank test while between-groups comparison utilized Mann-Whitney U test. For repeated observations (measuring the effect of timolol and dorzolamide at baseline
and up to nth months of observation) factorial analysis of variance was done. Posthoc comparisons included Bonferroni and Scheffe’s tests. All tests of significance were carried out at .05 alpha level of significance and 95% confidence level using STATA version 7.

Assuming that a 2 µm mean difference in corneal thickness is noted between eyes treated with timolol and dorzolamide (based on previous foreign studies) with a standard deviation of ± 2 from the mean (twotailed test) and that the standard deviations assumed for each intervention is assumed to be equal and that an intervention may produce no observable effect; the sample that will be required to detect this true difference is 16 per arm (total n = 32). This sample size is sufficient to reject the hypothesis of equality at .05 alpha level of significance producing a type II error of 20% generating a study power of at least 80%. The estimation of sample is shown as: 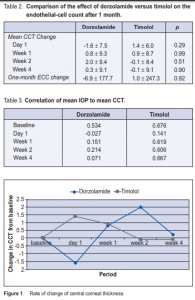 and after 1 month of treatment showed no statistically significant difference between both groups (Table 2). The correlation between mean IOP and mean CCT in each group was maintained throughout the four-week treatment (Table 3).

Dorzolamide is a potent inhibitor of CA-II isoenzyme, which is found in various parts of the eye including the
corneal endothelium.1-2 There has been a growing concern that the drug may exert an adverse effect on the corneal-endothelial cells by inhibiting the bicarbonate pump. Corneal-endothelial-cell function can be determined by measuring the corneal thickness. In this study, we compared the effects of dorzolamide and timolol on CCT and found no statistically significant difference after 1 month of treatment. In a three-month study by Kaminski, an initial increase in CCT was seen on day 1 with dorzolamide, but the CCT subsequently returned to baseline in the succeeding days.14 A study by Lass et al. showed a trend toward an increase in CCT in a span of 1 year in the dorzolamide group and a decrease in CCT in the timolol group although the difference was not statistically significant.15 This study, however, did not record the findings during the first month of treatment. Another study by Lass and colleagues on the corneal effects of latanoprost, latanoprost–timolol, and timolol in patients with glaucoma showed no significant increase in CCT in the timolol group
at 6 and 12 months.19 Our findings were consistent with the results of this study in which timolol had no change in CCT at week 4 of treatment. Another way to study endothelial-cell function is the determination of endothelial-cell count although it cannot equate with endothelial function because of significant functional reserve of this cell layer.18 The method of determination of endothelial-cell count is also subject to technical variables such as cell size, variations in cell area, total number of cells counted, clarity of image, corneal thickness, position of the cornea where image was taken, image magnification, and observer variability. To minimize the effect of these variables, the same instrument and results were read by a single, masked technician. In our study, there was no significant difference between the two groups after 1 month of treatment. Luna et al. showed a correlation between CCT and IOP as measured with the Goldmann applanation tonometry among Filipinos with normal eyes.17 Our study found low to no correlation among glaucomatous eyes at baseline and at 1 month of treatment. In conclusion, dorzolamide did not cause a significant change in CCT and endothelial-cell count of glaucomatous eyes at 1 month of treatment. Further studies involving a larger sample and longer observation period are needed to confirm whether dorzolamide has a significant effect on the endothelial-pump mechanisms of the human eye.