PERFLUOROPROPANE (C3F8) is an expanding fluorinated hydrocarbon gas used during vitreoretinal surgery to provide prolonged internal retinal tamponade.1, 2 C3F8 has been demonstrated to increase the rate of retinal reattachment in the management of rhegmatogenous retinal detachment (RRD) complicated by proliferative vitreoretinopathy (PVR).3, 4 The primary complication of C3F8 use is intraocular-pressure (IOP) elevation that may lead to glaucomatous nerve damage.5 To prevent this potentially sight-threatening event, surgeons attempt to achieve a nonexpanding concentration of 12 to 20% C3F8 by either passing a large-volume infusion of the nonexpanding concentration through the air-filled vitreous cavity (fixed-concentration (FC) method) or by injecting a finite volume of 100% C3F8 that, when mixed with the volume of air present in the vitreous, produces a nonexpanding concentration (fixed-volume (FV) method).3, 6 This study compared the safety and efficacy of FC and FV methods of achieving gas tamponade for retinal reattachment surgery. The effectiveness measures were reattachment rate, gas volume (GV) and longevity, while the main safety measures included postoperative IOP and complication rate.

Twenty eyes of 20 consecutive patients with RRD and PVR (grade C) seen from January 1 to December 31,
2000 at the Retina Service of the Department of Ophthalmology and Visual Sciences, Philippine General Hospital were included. We excluded patients with a history of glaucoma, ocular hypertension, uveitis, and prior retina surgery. All eyes underwent combined pars plana vitrectomy, lensectomy, panretinal photocoagulation, perfluoropropane gas (C3F8)/fluid exchange, and scleral buckling performed by a single surgeon (HSU) under periocular anesthesia with sedation. Informed consent was obtained from all patients. The study protocol was approved by the Institutional Review Board of the University of the Philippines College of Medicine. Prior to sclerotomy closure, the eyes were randomized by toss coin to one of two groups. In the FC group, one of the sclerotomy ports was first closed with vicryl 7-0 sutures. A 50-ml syringe containing 20% C3F8 gas was prepared by mixing 10 ml of 100% C3F8 with 40 ml of filtered room air. Approximately 45 ml of 20% C3F8 was slowly injected through the infusion cannula into the eye while intraocular air was expelled through the remaining unclosed sclerotomy. This allowed for exchange of air with 20% C3F8. The remaining sclerotomy was closed followed by removal of the infusion line and closure of the infusion sclerotomy. The IOP was checked using a sterile Schiotz tonometer. If the eye was hypotonic (IOP<5 mm Hg), 20% C3F8 was injected through the pars plana to achieve a soft eyeball (IOP = 5 to 25 mm Hg). In the FV group, the infusion line was removed and all 3 sclerotomies were closed with vicryl 7-0. A 1.0 ml bolus of 100% C3F8 gas was injected into the eye through the pars plana. Immediately after injection, the IOP was measured using a Schiotz tonometer. If the IOP exceeded 25 mm Hg, paracentesis was performed through either the cornea or pars plana to remove enough aqueous or gas to adjust IOP to 5 to 25 mm Hg. All eyes received steroid-antibiotic and atropine drops for 4 to 6 weeks and were examined on day 1, weeks 1, 2, 3, 4, 8, 10 by a single masked observer (MDD) who estimated the intraocular GV using an indirect ophthalmoscope and determined the IOP using a Goldmann tonometer (Haag Streit, Bern, Switzerland).

We compared 2 techniques of intraocular gas fill for internal retinal tamponade and found both methods to be similarly safe and effective. The FC method flushes out air (0% C3F8) and replaces it with a nonexpanding concentration of C3F8. This technique may minimize the risk of overfilling and IOP rise; however, FC method is more costly as a greater volume of 100% C3F8 is used to prepare the C3F8/air mixture. The FC method uses 10 ml to prepare 50 ml of 20% C3F8/air while the FV method uses only 1 ml. The potential for gas leak from the open sclerotomy port or infusion line, used to vent the air/C3F8 mixture, may result in underfilling and insufficient gas tamponade. The FV method is more efficient in its use of C3F8 and is faster to perform. There is less potential for underfilling since all the ports are closed when injection is done. There is a greater risk for postinjection IOP rise if the eye volume is smaller than average. However, careful determination of intraoperative IOP and intraoperative withdrawal of gas or aqueous can adjust the intraoperative GV and prevent unwanted postoperative IOP rise. The duration of gas tamponade affects the success rate for retinal reattachment. Compared to short-acting agents like sulfur hexafluoride (SF6), long-acting gases like C3F8 have been shown to increase the success rate for repair of complex retinal detachments.4, 7 A 0.3-ml gas bubble tamponades 90 degrees of arc while 0.8-ml tamponades 120 degrees of arc.9 Because tamponade effectiveness is influenced by GV, longer and larger GV during the postoperative time period can improve the chances for successful reattachment. However, longer gas duration also results in prolonged visual recovery and greater risk of IOP rise. A longer gas duration also extends the postoperative prohibitive period for entering high altitudes where lower atmospheric pressures may cause expansion of intraocular C3F8 GV with consequent IOP rise and potentially blinding, pressure-induced cessation of retinal circulation. 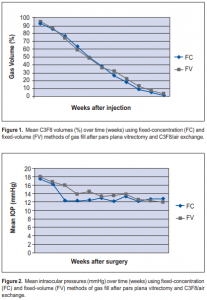 It is believed that air travel may be safe when the GV is 20% or less. This study suggests that almost all patients may expect to travel by the eighth week after surgery.10 The nonexpanding concentration of C3F8 has been reported to be between 12 to 20%.2, 6 The half-life of C3F8 greatly depends on this initial concentration. The halflife of 20% C3F8 has been reported to be 12.5 ± 1.1 days.9 However, studies have demonstrated wide, interindividual variations in GV disappearance rates.11 The results of this study demonstrate these wide variations in GV longevity and the need for careful postoperative observation when using intraocular gases. In summary, use of perfluoropropane is a very effective tool for the repair of rhegmatogenous retinal detachment. Both FC and FV methods were comparable in terms of GV and gas duration, postoperative IOP, and retinal reattachment rate. With proper precautions and technique, an injection of 1.0 ml of 100% C3F8 into an air-filled eye may be a safer, less costly, and equally effective method of achieving retinal tamponade than a larger volume exchange of 20% C3F8.