THROUGH the years, ophthalmologists have seen the evolution of refractive surgery, from radial keratotomy to modern-day laser in-situ keratomileusis (LASIK). To date, LASIK is one of the most commonly performed surgical procedures to correct errors of refraction particularly myopia.1-2 Studies have shown that conventional excimer corneal ablation treatments have been safe and effective, and most patients have excellent uncorrected visual acuity and best-corrected visual acuity.1,3-4 However, unwanted postoperative visual symptoms have been reported.1,4-7 Higher-order aberrations (HOAs) have been reported in conventional LASIK and were associated with these symptoms. To minimize postoperative visual aberrations, advances in laser ablation profiles, including increased ablation-zone diameters, wavefront-guided and wavefront-optimized platforms have been introduced. To create a more optically desired outcome, wavefront-guided ablation treatments measure corneal aberrations and plan individual ablation profiles. Wavefront-optimized laser profiles adjust and optimize the asphericity of the cornea based on an ideal model. A study by Stonecipher and Kezirian compared the three-month postoperative result of wavefrontoptimized and wavefront-guided LASIK for myopic astigmatism using the Allegretto wave.

They concluded that in the majority of eyes, there were no statistically significant differences in visual acuity and refractive outcomes between the treatment groups.5 In 2007, the first Allegretto Wave Eye-Q Excimer Laser was introduced in the Philippines. Currently, there are no local data on the safety profile of this system. Thus, this paper evaluated the efficacy, predictability, and safety of LASIK surgery using the Allegretto Wave Eye-Q excimer laser in a tertiary hospital.

METHODOLOGY
A total of 154 consecutive eyes of 79 patients underwent myopic LASIK treatment with the Allegretto Wave Eye-Q excimer laser using the Magoulas’ revised Wellington Wavelight Allegretto 400 treatment nomogram performed by a single surgeon. Chart review was performed for all patients. Only those with follow-up period of at least 3 months postoperatively were included in this retrospective study. Pre-operative and postoperative data were tabulated for each case using a specific data sheet. Patient demographics, manifest and cycloplegic refraction, uncorrected visual acuity (UCVA), and best-corrected visual acuity (BCVA) were noted for each case. Intraoperative treatment parameters were, likewise, established. Postoperative UCVA and BCVA were determined for each case. Manifest refraction spherical equivalent (MRSE) and complications were also documented. Safety was defined as maintenance or gain of Snellen lines of BCVA postoperatively. Efficacy and predictability were defined as postoperative uncorrected visual acuity ≥ 20/20 and within ± 0.50 diopters of the target mean refractive spherical equivalent respectively. A full voluntary informed consent was obtained from each patient after a thorough discussion of the procedure by the surgeon. All surgeries were done under topical anesthesia using Alcaine (Alcon, Fort Worth, TX, USA). Either a Moria Evolution 3 with superior hinge or an Amadeus I with nasal hinge microkeratome was used for the creation of the flap. The flap thickness varied from 120 to 140 microns. For patients with ≥ 1.5 D cylinder, corneal markings were made prior to the surgery. Treatment was adjusted according to the Magoulas’ revised Wellington Wavelight Allegretto 400 treatment nomogram. Postoperatively, patients were given tobramycin/dexamethasone (Tobradex, Alcon, Fort Worth, TX, USA) 4 times a day for 10 days and hypromellose (Genteal, Novartis, Cambridge, Massachusetts, USA) every 3 hours. 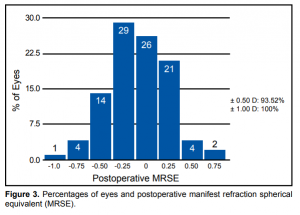 Nearly 94% of eyes maintained or gained 1 to 2 Snellen lines of BCVA postoperatively. Sixty-three percent had no change in BCVA, while 30% gained 1 to 2 Snellen lines of BCVA (14.8% gained 1 line, 15.7% gained 2 lines). One patient (0.9%) lost 2 Snellen lines of BCVA (Figure 2). The mean postoperative MRSE was –0.04 ± 0.26 D. The general refractive predictability was 93.52% within ± 0.5 D from the target refraction, while 76% of all patients had a postoperative MRSE of within ± 0.25 of the target (Figure 3). One patient had bilateral epithelial slide intraoperatively and was placed on bandage contact lens postoperatively until the epithelium had fully healed. Three patients had grade 1 to 2 diffuse anterior lamellar keratitis, which eventually resolved on follow-up. No retreatment was necessary for any case.

DISCUSSION
LASIK is the most common refractive surgery procedure done today, as the safety, efficacy, and predictability profiles have improved over the years. In the Philippines, refractive-surgery procedures have been gaining wide acceptance. There are several local refractive centers equipped with different excimer lasers and variable treatment profiles. To the best of our knowledge, this is the first local study on the wavefront-optimized treatment of myopia with the Allegretto Wave Eye-Q excimer laser. The efficacy and safety results of our study were comparable to those conducted by the US Food and Drug Administration (FDA) and other large studies for myopic LASIK. Our efficacy profile showed that 92.6% of eyes had UCVA of 20/20 or better, comparable to the 93% achieved in the FDA study.5 All patients in our study achieved 20/30 or better UCVA, also comparable to the 20/40 or better vision achieved in the FDA trial. Yuen et al. presented a large-scale study showing 72.8% and 90% of patients achieved UCVA of 20/20 or better and 20/40 or better respectively.8 Their results were slightly lower and may be reflective of the longerterm follow up and that not all their treatment profiles were wavefront-optimized. Padmanabhan and coworkers noted that 85% in wavefront-optimized patients had uncorrected visual acuity of 20/20 or better,6 similar to our results. Our study also showed that 93.5% of patients maintained or gained BCVA after surgery. This is similar to the 97% seen in the FDA study. The mean percentage of losing 2 or more lines of BCVA was 0.61% in the FDA trial and 0.6% in the Yuen study, comparable with our results of 0.93%.5, 8 The predictability profile in our study showed that 94% of patients were within ± 0.50 D of the target refraction. This was better than the Padmanabhan’s study at 89%. For the past decades, conventional LASIK treatment has been well tolerated and efficient for the treatment of myopia. However, a decrease in visual performance, particularly contrast sensitivity, and night vision problems postoperatively have been reported in literature. Thus, wavefront-guided profiles have been introduced to achieve reduction and lessen induction of higherorder aberrations in the treatment of refractive errors.4 More recently, wavefront-optimized treatment has been developed to address some unexpected ablation results in conventional LASIK. Results of studies comparing wavefront-guided and wavefront-optimized treatment have been promising, with 1 study concluding that the efficacy, predictability, and safety were not statistically different, and both groups have good outcomes.6 Others have proposed using wavefront-optimized profiles as default treatment due to its good results and reserve wavefront-guided ablations for patients with large amount of higher-order aberrations. Using wavefront-optimized treatment in our study may be one reason why some of the predictability and efficacy profiles were better than those that received conventional LASIK. The use of the accompanying nomogram further helped in obtaining a more predictable outcome. In conclusion, our study showed that myopic LASIK performed in the local setting using the Allegretto Wave Eye-Q excimer laser is safe and efficacious, with high refractive predictability.