Toxic epidermal necrolysis (TEN) represents an immune complex-mediated disease in which circulating immune complexes of the IgM class are deposited in the vessels. A vasculitis is induced in the superficial blood vessels of the skin and conjunctiva by deposition of immune complexes. This results in necrosis of the surrounding tissue and attraction of polymorphonuclear leukocytes. The drugs that serve as triggers act as haptens that produce antigens by combining with autologous proteins. The antigen induces antibody, and an immune-complex reaction occurs. A 20-year (1971 to 1991) survey of cornea and external eye disease problems in the Philippines documented 103 cases of Stevens-Johnson syndrome (SJS), 11 cases of mucous membrane pemphigoid, and 4 cases of TEN out of 14,553 patients.1

CASE REPORT
A 21-year-old female was admitted at the emergency room of the University of the Philippines–Philippine General Hospital (UP-PGH) for skin rashes and exfoliation. Five days prior to admission, she had a sudden onset of erythematous, non-pruritic rashes on the face and the lips, with undocumented low-grade fever after eating ginataang tulingan. She self-medicated with oral betamethasone with no relief of symptoms. Two days later, her rashes spread to both upper and lower extremities including her torso. This was associated with pain and beginning bullae formation on her face. Fever was no longer noted at this time. She had earlier consulted a local hospital and was prescribed inosiplex, cloxacillin, and cetrizine. However, the rashes persisted and increased in severity prompting consultation at the UP-PGH. The patient complained of eye pain (described as burning), blurring of vision, photophobia, tearing, and a foreign-body sensation in both eyes. She was assessed to have Stevens-Johnson syndrome, and treated with hydrocortisone, diphenhydramine, and famotidine. She was transferred to the internal-medicine service, where she was diagnosed with toxic epidermal necrolysis (TEN) with secondary bacterial infection, and an adverse reaction to “tulingan.” Ceftriaxone, clindamycin, and petroleum jelly applied over the skin lesions were added to her medications. She was consequently referred to the Allergy, Burn, and Ophthalmology services. Physical examination showed the patient had diffuse epidermal sloughing of her face; generalized eruptions of previous bullae; and erosive lesions on her mouth, bilateral upper extremities, and anterior trunk (Figure 1). A positive Nikolsky’s sign was seen over areas of erythema. Target-like formation of the skin lesions was noted, including on her lower extremities. The skin eruptions also involved the eyelids in both eyes. The conjunctivae were hyperemic with infiltration, mucopurulent discharge, and pseudomembrane formation. An epithelial defect was present in the central cornea (Figure 2). Visual acuity at near was J10 (distance equivalent of 20/100) in both eyes. 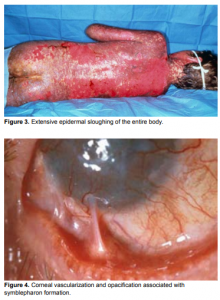 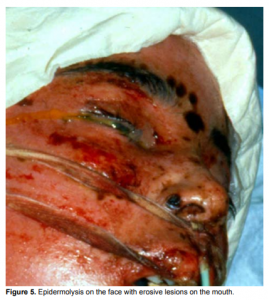 DISCUSSION
The most important differential for this patient is Stevens-Johnson syndrome (SJS). Most cases of SJS occur in patients under the age of 45. Males are more frequently involved than females. Symptoms usually develop about 3 weeks after exposure to the trigger.2 Clinical manifestations include a prodromal stage of headache, chills, fever, malaise, tachycardia, and tachypnea. Prostration precedes the onset of the skin and mucous membrane eruptions by several days. The fever is high and persistent.3 There is a symmetrical dusky maculopapular rash, often arranged in polycyclic circles (target-like lesions). They are urticarial, and begin on the extensor surfaces of the hands, forearms, neck, and face but can involve the entire body as in the case of this patient (Figure 3). Most often the trunk is involved. The oral mucosa, urethra and genital areas are also frequently involved.3 Lid edema is the earliest ocular manifestation.

Typical target lesions, flaccid bullae, and loss of the epidermis can develop on the lids. A pseudomembranous conjunctivitis is the most common ocular manifestation. This is usually associated with an epithelial keratitis that leads to corneal ulceration, vascularization, and opacification (Figure 4).4 SJS was considered for this patient because of the age (less than 45 years old), onset associated with a trigger, presence of fever and general malaise, target-like lesions on the extensor surfaces and trunk, oral mucosa lesions, loss of lid epidermis, membrane formation, and corneal epithelial erosions. However, SJS was ruled out because the symptoms developed on the same day of exposure, the fever was low-grade and short-lived, onset of skin lesions was too early, and the body surface area involved was much larger than what is expected for SJS. The final diagnosis was TEN, which occurs at any age but is more common in adults. It affects females more frequently than males, and is associated with drug exposure or vaccine administration.5 There is a prodrome of headache, malaise and fever, usually of short duration. Eruption varies from a diffuse erythroderma to a localized or generalized bullous eruption. Skin lesions involve more than 30% of the total body-surface area. There is a positive Nikolsky’s sign. Epidermolysis develops within hours of the onset of the skin eruption, and reaches its maximum within 48 hours. There are erosive lesions of the mouth that occur during the first 24 to 48 hours as seen in this patient (Figure 5). Lid edema is common during the acute phase and is the earliest ocular manifestation. Eruption may involve the lid, and a positive Nikolsky’s sign is demonstrated if the lids are forcibly opened. Hyperemia, conjunctival infil- tration, mucopurulent discharge, and pseudomembrane formation frequently occur. Erosive corneal lesions are located in the center and develop early in the disease.5 In the management of TEN, a full history must be obtained and all drugs used prior to the onset of the disease should be discontinued. The conjunctival sac should be irrigated several times daily with warm sterile normal saline or balanced salt solutions to remove mucopurulent secretions. Break symblepharon under topical anesthesia with a glass rod or applicator stick at least once daily. Concurrent conjunctival bacterial infection should be treated with appropriate topical antibiotics. Topical glucocorticoids are not recommended especially if patient presents with corneal ulceration. Artificial tears are indicated for any signs of dry eye. Cryoablation is done for misdirected lashes, and tarsorrhaphy for persistent epithelial defect.