Diabetic retinopathy (DR) remains a major cause of morbidity in diabetic patients and is one of the leading causes of preventable blindness in developing countries. It carries a significant socioeconomic cost for healthcare systems worldwide. Since diabetes is expected to increase from 366 million in 2011 to 552 million in 2030, DR will become a serious problem in the future.3 The global public health burden of DR highlights the significance of early detection and searching for new approaches beyond current standards of diabetes care.

In our study, both SMILE and F-LASIK showed excellent efficacy, safety, and predictability. SMILE was comparable to F-LASIK. Its efficacy and safety indices were analogous with other studies on femtosecond lenticule extraction procedure by Kamiya et al.,5 and SMILE by Hjortdal et al.10 However, there is a slight delay in visual recovery in SMILE. Both groups showed a recovery trend as time passed.

DR is considered to be a microvascular complication caused by the imbalance in the metabolic pathways secondary to hyperglycemia. The clinically demonstrable changes in the retinal vasculature in diabetes have led to the general assumption that the retinopathy is solely a microvascular disease. However, the retina is not mainly a vascular tissue; rather, it is a neurovascular unit interconnected to form functional molecular interactions.

Both SMILE and F-LASIK (54.3% and 55.3%) groups had a favorable tendency toward emmetropia at 1 month postoperatively onwards. SMILE-treated eyes were closer to emmetropia than the F-LASIK treated eyes at 3 months and 1 year postoperatively (54.3% vs 47.4%; 60% vs 50%). This is similar to the study of Vestergaard et al.

A diagnosis of DR is given once microangiopathic signs such as microaneurysms, the first visible fundus manifestations are detected in the retina. Emerging evidence shows that the increase in oxidative stress due to diabetes leads to retinal ganglion cell (RGC) apoptosis and glial cell impairment and loss even before microangiopathic signs are seen. Indeed, RGC apoptosis has been noted in animal models as early as 14 weeks, while a manifest vasculopathy was not observed until approximately 6 months after the induction of diabetes.8 This may imply that neuronal dysfunction can occur prior to clinically detectable signs of vasculopathy.

This neurodegeneration corresponds with previous functional studies showing neuroretinal deficits including electroretinogram (ERG) abnormalities, loss of dark adaptation, color disturbances and decrease in contrast sensitivity in patients with diabetes without clinically detectable retinopathy.9-13 However, visual field defects occurring in early diabetes have received comparatively little attention. Majority of studies on visual fields in diabetic retinopathy used Standard Automated Perimetry (SAP) which resulted in reduction of retinal sensitivity in diabetic subjects without retinopathy as well as those with more severe retinopathy.

In this investigation, sensitivity was assessed using short wavelength automated perimetry (SWAP), a more selective perimetry designed to expose blue stimuli on an intense yellow background and is established in detecting pre-perimetric glaucoma. The principle of this method is selectively testing the short wavelength sensitive (SWS) cone mechanisms which are less redundant and are reported to be more susceptible to damage in diabetes. Previous studies have reported earlier functional deficits in diabetic patients with minimal to no retinopathy using the SWAP technique compared to SAP.

This study aims to determine the significance of SWAP in detecting changes in retinal sensitivity in early diabetic patients without retinopathy and with mild NPDR and to correlate these findings with the peripapillary RNFL thickness as well as glycemic control (HBA1C). To our knowledge, this is the first study correlating functional changes using SWAP and morphologic changes in peripapillary RNFL thickness using SD-OCT in early diabetics.

This study may aid in early functional monitoring of diabetics even before clinically detectable vascular manifestations are evident. SWAP and peripapillary RNFL thickness may serve as functional biomarkers of visual dysfunction in early diabetics. From the clinical point of view, the early identification of neurodegeneration will be crucial for implementing an early treatment based on drugs with a neuroprotective effect.

This is a prospective, cross-sectional study. The study population consisted of 40 eyes of 40 patients with type 2 diabetes of less than 5 years duration, at least 18 years of age without signs of diabetic retinopathy and with mild non-proliferative diabetic retinopathy (NPDR) from private clinics and social service department (Ophthalmology, Internal Medicine and Endocrinology) of St. Luke’s Medical Center, Quezon City from November 2015-June 2016. This study protocol was reviewed and approved by the Institutional and Ethics Review Board of St. Luke’s Medical Center. The study adhered to the tenets of the Declaration of Helsinki. All subjects provided signed informed consents.

The primary outcome measure was mean deviation (MD) among diabetic patients with no DR and mild NPDR.

Sample size was calculated based on the study of Zico et al.21 wherein the standard deviations of MD of controls versus no signs of DR are 2.02 and 1.12, respectively. Given an alpha error of 0.05, Power of 95%, Type 2 hypothesis, effect size of 2.19, the sample size calculated per group was 18. 18 multiplied by 2 groups are 36 which were the minimum total subjects needed.

Data were analyzed using the SSPS software version 20 (SSPS Inc., Chicago, IL, USA). T-test was used to analyze the mean difference in MD, PSD and average peripapillary RNFL thickness among the subjects with no signs of DR and mild NPDR. Linear regression was used to correlate the relationship of MD with the average peripapillary RNFL thickness and HBA1C among the population. Significance was attributed when P <0.05.

Among the 40 subjects, 3 were excluded due to unreliable visual field results. Thus, a total of 37 eyes of 37 patients were included in the study. The eye with the worse diagnosis was considered. If both eyes had similar diagnosis, the study eye was randomly selected. 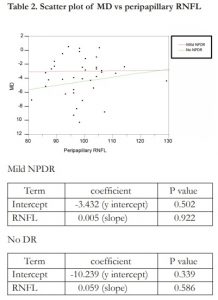 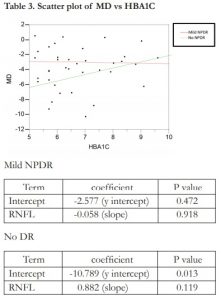 Our study yielded results which were contrary to those published. Possible explanations are the test retest variability of SWAP and the lens absorption properties. The study by Bengtsson et al. showed that MD test retest variability was greater with SWAP compared to SAP (p= 0.000) with a median variability of 1.34 dB for SWAP and 0.71dB for SAP. Another explanation is the absorption properties of the lens. Cataract absorbs the short wavelength stimulus thus decreasing its transmission which leads to the reduction of the hill of vision. This translates to more depressed visual fields. A study by Lutze et al. also suggests that increase rate of lens density reported in diabetic patients can lead to an apparent reduction in S cone system sensitivity.

The pathophysiology behind the deterioration of test points despite the absence of retinopathy can only be speculated upon. In glaucoma, it has been established that structural damage precedes functional damage.25 In diabetes, recent studies have demonstrated that retinal neurodegeneration is present even before the development of clinically detectable microvascular damage. Oxidative stress leads to retinal ganglion cell (RGC) apoptosis even without overt signs of diabetic retinopathy.5-8,16,26 Recent studies have consistently shown that macular RNFL and ganglion cell layer (GCL) are thinner in diabetic patients without signs of retinopathy compared controls.27-30 However, there is conflicting data on the occurrence of peripapillary RNFL thinning in diabetic patients without detectable diabetic retinopathy.

The discrepancy in our result may be due to the fact that RNFL thickness is known to decrease with increasing age.33 Since majority of our subjects were above 50 and the subjects in the no DR group were older, the normal aging process might have masked the small differences between the 2 groups.

In those with mild NPDR, no correlation was found between the MD and HBA1C. This was in contrary to the study of Zico et al, which showed a significant correlation between SWAP MD and HBA1C.21 Surprisingly, in the no DR group, there is a weak and positive correlation between HBA1C and MD which suggests that as the HBA1C worsens, there is improvement in the MD. This can be due to the higher HBA1C found in the no DR group compared to the mild NPDR group and the variability that HBA1C contributes to the visual function. The study of Bengtsson et al. revealed that HBA1C can be a factor for variability at peripheral test points but not at paracentral points of the visual field. A positive correlation was seen with SAP which indicates that an increase in HBA1C fluctuation, increases variability. However, there is a negative correlation with SWAP which suggests that a decrease in HBA1C fluctuation, increases variability.

Knowledge of the random test retest variability is essential in interpreting perimetric tests. Because of the variability of SWAP, it has been suggested that SAP and FDT are more reliable functional tools for monitoring progression in those without signs of diabetic retinopathy.

In conclusion, SWAP does not appear to be a sensitive measure of worsening retinopathy in older individuals with early diabetes. The usefulness of SWAP and peripapillary RNFL thickness in the early stages of retinopathy are inconclusive. Whether SWAP can essentially be used for early screening requires further studies. Nevertheless, neurodegenerative changes of retina and corresponding visual functional impairment in diabetics need more attention during evaluation of diabetic retinopathy.

This study has some limitations. First of all, majority of those recruited were above 50. Therefore, age-related lens changes were inevitable. The study characteristics were also not uniform. This could have led to the variability in the SWAP indices. Recommendations for further studies would be to increase the sample size and to recruit young diabetic patients with clear lens and 20/20 vision. By removing the possible confounders, the tests may yield more conclusive results.

ACKNOWLEDGEMENTS
Sincere gratitude is extended to the following who helped make this paper possible:

St. Luke’s Medical Center Research and Biotechnology for graciously providing the grant for this study.

Macario Reandelar, MD, MSPH, the statistician, for his expertise in the analysis and interpretation of data.