WITH MOST antibiotics, penetration into the vitreous cavity is poor when administered intravenously or orally.1 Because of this, intravitreal injection is the preferred treatment for endophthalmitis. It improves outcome2 because the antibiotic bypasses the blood-retinal barrier and rapidly achieves therapeutic drug levels. The ideal drug must not only show good activity against both grampositive and gram-negative organisms but must also be tolerated by the ocular structures, particularly the retina.3 Intravitreal antibiotics can cause retinal toxicity and macular ischemia.4, 5 Moxifloxacin appears to exhibit efficacy against gram positive and gram-negative bacteria and is a promising agent for the treatment of endophthalmitis.6
This study determined the retinal toxicity of moxifloxacin. 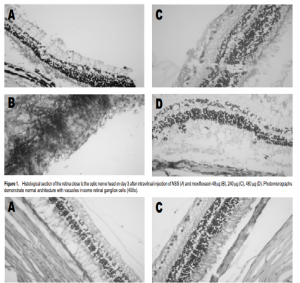 Povidone iodine solution was applied over the conjunctivae. Moxifloxacin was injected intravitreally into the right eye 2 mm from the limbus, close to the superior rectus muscle. Using a loupe 3x magnification, the injection was performed with tuberculin needle directed to the center of the vitreous cavity. 0.1 ml of aqueous humor was removed prior to the injection. The eyes were evaluated by slit-lamp biomicroscopy before the injection and on the third and seventh day after. The pupils were dilated with topical tropicamide (Anten Pharmaceutical, Osaka, Japan) plus phenylephrine for fundus examination by indirect ophthalmoscopy. Three days after surgery, the right eye of one rabbit in each group was enucleated. The eyes of the remaining rabbits were enucleated at day 7. The enucleated eyes were fixed in 10% buffer formaldehyde and stored. Specimens from the peripheral retina, central retina, and optic nerve were obtained from each eye. The segments were embedded in paraffin and processed for light microscopy. Histologic preparations were stained with hematoxylineosin and toluidine blue. The study complied with the guidelines of the Association for Research in Vision and Ophthalmology on the use of animals.

RESULTS
Slit-lamp biomicroscopy and ophthalmoscopy showed that all eyes were normal following intravitreal injection of moxifloxacin. Fundus examination did not show blood in the vitreous. No cataract nor retinal detachment was found. There were no abnormalities on gross and microscopic histopathology. All the eyeballs showed normal retinal architecture except for some empty vacuoles which were observed in both control and treated eyes (Figures 1 and 2).

DISCUSSION
Fourth-generation fluoroquinolones have been engineered to defy bacterial resistance. Earlier fluoroquinolones target the enzyme DNA gyrase (topoisomerase II) in gram-negative bacteria and topoisomerase IV in grampositive bacteria. In contrast, fourth-generation quinolones block these enzymes simultaneously in both gram-positive and gram-negative bacteria. For resistance to occur, mutations would have to take place simultaneously at both sites. These drugs also combat bacterial efflux, a process by which the pathogens actively pump the drugs out of the cytoplasm.7 Side effects limit the systemic use of moxifloxacin and other quinolones.8 Previous studies have shown that moxifloxacin efficiently penetrates soft tissue9,10 and cerebrospinal fluid (CSF).11 It also has an excellent penetration into the human aqueous humor, reaching levels of 2.33 + 0.85 µg/ml 10 hours after a single oral 400-mg dose.12 Tanahashi et al.suggested careful attention with higher doses of norfloxacin to be injected intravitreally.13 Ohkubo et al. observed retinal toxicity in higher doses of levofloxacin in rabbit retina.14  In our study moxifloxaccin did not lead to funduscopic and histologic changes after intravitreal injection of 480 µg. This is way above the minimal inhibitory concentration (MIC) for most common microorganisms causing endophthalmitis such as staphylococcus, with MIC of 2.50 µg15 and Pseudomonas aeruginosa with MIC of 8 µg.16 Moxifloxacin may be a potentially important drug in the treatment and prevention of clinical bacterial endophthalmitis. It has no evident retinal toxicity histologically in doses up to 480 µg. Future studies are needed to assess the intravitreal levels of moxifloxacin by highperformance liquid chromatography and to determine its elimination half life. An electroretinogram should be used to assess retinal function. Further studies in primates are required to confirm the efficacy and safety of this route of administration.