GRAVES’ ophthalmopathy is believed to be a chronic autoimmune process with extrathyroidal manifestation. Orbital tissues are affected.1, 2 Upper-eyelid retraction is a common finding in Graves’ ophthalmopathy. It causes a startled or aggressive appearance, keratopathy, and ocular discomfort from globe exposure.3 Other symptoms are blurring of vision, orbital congestion, proptosis, and visual loss secondary to optic neuropathy.4, 5 Graves’ ophthalmopathy may also cause extraocular muscle dysfunction due to muscle fibrosis.6 In addition to its disfiguring and disabling effects, Graves’ ophthalmopathy can also have negative influence on the patient’s quality of life.7 Lid retraction may be caused by a number of factors namely overaction of the levator muscle, sympathetic overaction of the Muller muscle, contraction and degeneration of the levator muscle and aponeurosis, and adhesion between the levator and subcutaneous tissues. Thus, surgery for lid retraction is aimed at the levator complex and Muller muscles.8 Several lengthening procedures with variable rates of success have been proposed for upper-eyelid retraction in patients with Graves’ ophthalmopathy.3
Recommended guidelines depend on the degree of lid retraction. Muller muscle surgery alone relieves 2 to 3 mm of lid retraction. Muller muscle and levator surgery relieves 4 to 6 mm of lid retraction. For greater lid retraction, spacers are considered. Once the lids are in appropriate position, further cosmetic procedures such as blepharoplasty, fat debulking or lateral tarsorrhaphy may be considered.9 Mild to moderate lid retraction may be corrected with a graded, controlled recession of the Muller muscle without recession of the levator aponeurosis. This is a relatively simple procedure that may be performed in the early phases of eyelid retraction (i.e., no exophthalmos and with minimal or no fibrosis). Because it is an outpatient procedure, it is convenient for both patient and physician. The ultimate goals are cosmetic rehabilitation and improvement of ocular discomfort and keratopathy. We present our experience with this technique.

METHODOLOGY
Medical records of patients with mild to moderate upper-eyelid retraction secondary to Graves’ disease who underwent Muller-muscle recession alone between August 1993 and May 2004 were reviewed. Five females 40 to 48 years of age were included in the study. All had mild to moderate retraction within 12 months from onset. At the time of surgery, patients had been biochemically and clinically euthyroid for at least 6 months. Patients with other signs and symptoms of Graves’ disease had been stable for at least 6 months before the eyelid surgery. Patients had no exophthalmos and no lid lag that signifies fibrosis. Lid lag is present when the upper lid fails to move with the eye as the patient looks downward. A complete eye examination that included measurement of the eyelid aperture and corneal light reflex to upper-eyelid-margin distance (MRD1) in the primary position of gaze was done. In this study, MRD1 of >5 to 6 mm was classified as mild
upper-eyelid retraction, >6 to 9 mm as moderate, and >9 mm as severe. Slit-lamp examination was performed to detect corneal staining. Patients had an endocrine clearance to ensure that the thyroid activity had been controlled for at least 6 months. All patients did not have exophthalmos based on the measurement using the Hertel exophthalmometer. Photographs of the eyes were taken before and after the eyelid-lengthening procedure. All surgeries were performed by one surgeon (VBL). Two drops of proparacaine hydrochloride (Alcaine 0.5%, Alcon-Couvreur Puurs, Belgium) were administered on both eyes. The eyelids were cleaned and disinfected with povidone-iodine antiseptic. Sterile drapes were placed. The central upper-eyelid margin of the involved eye was infiltrated with 2% lidocaine with 1:100,000 epinephrine HCl (Hizon Laboratories, Manila, Philippines) (Figure 1a). An upper eyelid temporary suspension suture (Frost suture) was made using silk 4-0 (Figure 1b). The upper eyelid was inverted using a medium sized Desmarres retractor and the superior tarsal plate was identified (Figure 1c). The conjunctiva and the Muller muscle were ballooned with the anesthetic agent (Figure 1d). A conjunctival incision was performed and the Muller muscle was severed from its insertion in the superior tarsal plate (Figure 1e). The conjunctiva and the Muller muscle were dissected upward to the level of the superior fornix 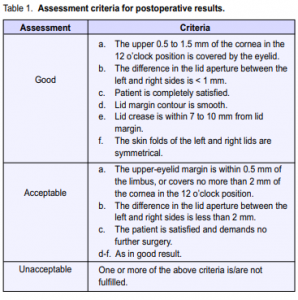 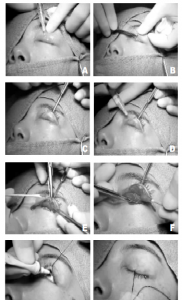 (Figure 1f). Phenylephrine 2.5% drops were instilled to cause retraction of the Muller muscle. The eye was closed and a steroid-antibiotic ointment was applied (Figure 1g). The Frost suture was taped on the cheek and pressure dressing was applied (Figure 1h). The dressing and the lid margin
suture were removed one day after surgery. Tobramycin and dexamethasone (Tobradex, Alcon-Couvreur Puurs, Belgium) eyedrops were instilled for 7 to 10 days. The outcome was evaluated by the senior surgeon 2 weeks after the operation. The eyelid aperture and MRD1 in the primary position were measured, corneal staining was assessed, and pre- and postoperative photographs were compared. The outcome was classified as good, acceptable, or unacceptable (Table 1). Patients were reevaluated after 4 weeks and during subsequent follow-up to assess longterm results. The result was deemed stable if the measurements remained unchanged
at follow-up.

RESULTS
Seven upper eyelids (of 5 consecutive patients) were corrected using Mullermuscle recession (Table 2). One patient had previous treatment (scleral graft) on the left upper lid. The indication for the lid surgery was primarily cosmetic rehabilitation in 3 patients. All patients were given artificial tears to relieve ocular discomfort prior to surgery. Table 2 shows the pre- and postoperative MRD1. For patients with unilateral lid retraction, the MRD1 of the normal contralateral upper eyelid was used as the asis for correction of the affected upper lid to achieve symmetry. For those with bilateral lid retraction, the basis was normal MRD1 of 3 to 4 mm. Muller recession achieved good results in two patients with bilateral upper-lid retraction (MRD1 of 4.5 to 8 mm). One of these patients underwent Muller recession of both lids in one setting. The other patient had unilateral lid retraction on initial visit and, only one lid was corrected. After a year, the other lid also had retraction and was corrected. Of these two patients, one underwent blepharoplasty of the right upper lid on follow-up. Neither patient had recurrence of lid retraction. Three patients had unilateral upper-lid retraction (MRD1 of 4 to 8 mm). Surgical correction achieved good results in 2 cases (Figure 3 and 4). The second patient underwent blepharoplasty of the left lower lid on subsequent follow-up. The third patient had asymmetric lid contour and underwent release of lateral adhesion on the left eye a week after the Muller-muscle recession. No recurrence of lid retraction was seen on any patient on follow-up. 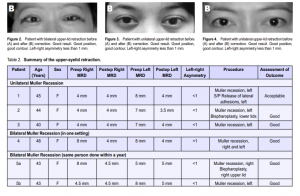 DISCUSSION
Upper-eyelid retraction secondary to Graves’ disease can trigger emotional and psychological problems in patients because of changes in physical appearance. Patients complain of cosmetic disfigurement and eye discomfort.10 Graves’ophthalmopathy has two stages: inflammatory (acute) and postinflammatory. The inflammatory stage usually lasts for three months to three years.7, 11 Management at this stage includes temporary tarsorrhaphy or the use of lubricants or guanthidine to control the retraction. The inflammation must be stabilized for about six months before surgical correction of upper-lid retraction can be considered.12, 13 Upper lids can be lengthened by an anterior or a posterior approach. The type of surgery would depend on how the thyroid disease has affected the patient’s eyes. Individuals may need one surgery or a combination of procedures. However, most of these procedures are done when fibrosis and contracture of the lid retractor muscles have occurred. These lead to abnormal adhesion between the levator muscle and the surrounding fixed orbital tissues and to a widened palpebral fissure, which accentuates the proptosis.3 These procedures are considered cumbersome by some physicians because of the fibrosis encountered during dissection. The patients involved in this series were all female, which may be because thyroid diseases affect more women than men.14 Patients underwent Muller-muscle recession under local anesthesia. They were awake, cooperative, and could be evaluated in an upright position during the procedure to ascertain the vertical eyelid position during and after surgery. No fat debulking was done together with the Muller recession. No complication was encountered except for the occasional subcutaneous hematoma. During the follow-up period, all patients had almond-like contour of the eyelids. No overcorrection was encountered that would have required reoperation. One patient needed a followup operation to release lateral adhesion due to reattachment. No recurrence of lid retraction or lid complication has been noted among the patients even after more than 10 years since surgery. Our series demonstrated that Muller muscle recession alone is an effective means of relieving mild to moderate isolated upper-eyelid retraction in patients with Graves’ ophthalmopathy and does not result in complications like exophthalmos. It can be performed by a general ophthalmologist on an outpatient basis. Surgical manipulation is minimal and just involves a transconjunctival incision, minimizing postoperative discomfort and any cutaneous scar. It is safe and recovery period is short. Most importantly, better outcome is achieved and the rate of recurrence of lid retraction is low.