Central serous retinopathy (CSR) was first described by Von Graefe in 1866.1 The characteristic finding of CSR is the formation of a localized neurosensory retinal detachment caused by leakage of fluid at the level of the retinal pigment epithelium, as confirmed by fluorescence angiography. Symptoms include sudden onset of dim and blurred vision, micropsia, metamorphopsia, and central scotoma. Men between the ages of 30 and 50 years old are preferentially affected.2 Additionally, CSR has been closely related in several studies to different psychological factors and certain personality dis­orders.1, 2 Yanuzzi suggested that the eye, specifically the macula, is an ultimate target area, which can be intermittently or continuously stimulated by type A behavior with its physiologic consequences.1 Conrad and associates showed that patients with CSR were more stressed due to inadequate coping strategies and have a higher incidence of physical complaints.3 Spahn et al showed that they have elevated psychic stress, heightened emotional instability, insecurity, flexibility and spontaneity.4
They were also associated with hysteria, depression, and hypochondriasis.5,6 There were several psychometric tools used in the studies mentioned; namely, the Jenkins Activity Survey, Symptom Checklist, Sixtee Personality Factors Questionnaire, and the Minnesota Multiphasic Personality Inventory (MMPI). The MMPI is the most widely used psychometric tool to determine objective personality characteristics of patients.7 Only the studies by Yoon5 and Werry used this tool to measure the psychological profile of patients with CSR. To date, there are no local studies that investigated the psychological profile of Filipino CSR patients using any psychometric tool. Thus, we investigated the psychological profile of Filipino patients diagnosed with central serous retinopathy and also determined the sociodemographic profile.

Patients diagnosed with CSR at the medical retina clinic of the Philippine General Hospital between January 2012 and August 2013 were recruited for the study. The inclusion criteria were: those diagnosed with CSR who had sudden onset of dim and blurred vision, micropsia, metamorphopsia, and central scotoma; those with serous retinal elevation confirmed by fluorescence angiography or ocular coherence tomography. The exclusion criteria were: those with other macular diseases such as age- or drusen-related degeneration, angioid streaks, choroidal rupture, ocular histoplasmosis syndrome, pathologic myopia, or inflammatory uveovitreal disorders such as Harada’s disease. Patients with neurosensory macular detachment associated with clinical or fluorescein angiographic manifestations indicative of subretinal neovascularization were also excluded. Prior to enrollment, each participant was given a patient’s information sheet explaining the study. An informed consent was obtained. Patients underwent a complete ophthalmological examination (Snellen visual acuity, slit lamp evaluation, intraocular pressure measurement, and dilated funduscopy).

The CSR diagnosis was based on typical symptoms of visual disturbances and metamorphopsia, and findings of serous retinal elevation confirmed by either fluorescence angiography or ocular coherence tomography. Once the patients were referred to the study, another examination was conducted to complete the data collection form. Socio-demographic characteristics such as: age, sex, social history (educational background, living companions, type and status of work), and medical history (past medical history, family medical history and ocular history) were obtained. The Minnesota Multiphasic Personality Inventory (MMPI) is considered an objective test for multidimensional personality diagnosis in adults. The test consisted of 566 items and took approximately three hours to complete. It assessed 10 major categories of abnormal human behavior with 10 clinical scales, and three validity scales that measured the person’s general test-taking attitude and whether they have answered the test truthfully and accurately. The 10 clinical subscales included hypochondriasis, depression, hysteria, psycho­pathic deviate, masculinity, femininity, paranoia, psychastenia, schizophrenia, hypomania, and social introversion.7 The MMPI has been translated into several languages. The Filipino version has been validated and is used in this study, administered by a trained psychologist. Patients who had difficulty with reading were assisted by the psychologist enabling them to answer the questionnaire accurately. The psychologist analyzed the results of the MMPI based on the available normative scale.

Descriptive analysis was compiled for sociodemographic data and for the psychological profile. Mean ± standard deviation with minimum and maximum values were used for continuous data and frequency with percentage distribution for categorical data. The study was approved by the research ethics board of the hospital and adhered to the tenets of the Declaration of Helsinki.

Sixteen patients were recruited to join the study. Two patients did not arrive for their scheduled psychological examination. One patient refused to answer the questionnaire due to its extensive length, while another refused to answer due to fear of disclosure of private issues. In total, 12 patients successfully completed the data collection form and the MMPI questionnaire. There were 10 males (83%) and 2 females (17%), with a mean age of 38 ± 8.58 years. Majority of the patients with CSR were males (83%); most of them (83%) lived at home with their families. All had some formal education: 58% reached high school level (attended or completed) and 42% college level (attended or completed). Seventy five percent (75%) worked in non professional roles (cooks, drivers, seaman, salesman) and 25% were not working. Most of them (67%) have no other medical conditions and 33% had one illness (hypertension, diabetes mellitus, peptic ulcer disease, or temporo-mandibular joint disorder). Only 25% wore spectacles while the remainder had unremarkable ocular history (Table 1). 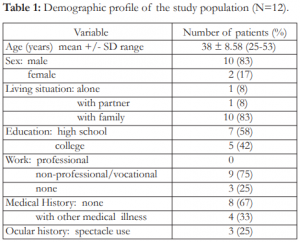 Based on a moderate rating of the MMPI validity scales (Table 2), patients with CSR were more associated with tendencies to schizophrenia (84%), hysteria (83%), depression (75%), psychopathic deviate (67%), and hypochondriasis (58%) compared to the normative sample (Figure 1). The remainder of the clinical scales (paranoia, masculinity/femininity, psychastenia, hypomania, and social introversion) could be considered normal compared to the normative sample (Table 3). Based on the psychological profile of the CSR patients, 33% were most likely associated with type A personality (Table 3). 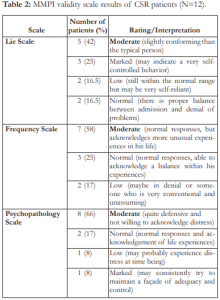 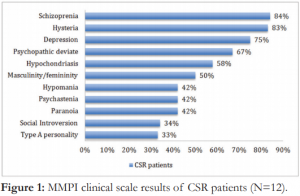 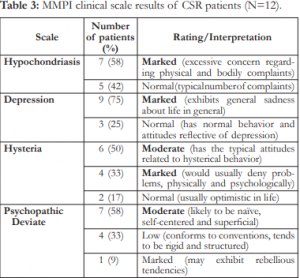 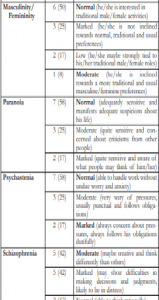 The socio-demographic profile of the sample population confirmed that CSR is an ailment more common in middle-aged males (Table 1), as noted in previous studies,1,3,4,8 averaging 81% and comparable to our results of 83%. As the majority of our CSR patients lived with their families, they may potentially benefit from familial support. All of them received at least some measure of formal education and the majority worked in non professional roles. There were no other related medical illnesses. In the series by Spahn, most CSR patients held white-collar jobs,4 in contrast to our study where most came from a lower income background. The psychological profile of the CSR patients, assessed using the Minnesota Multiphasic Personality Inventory test, showed that patients have a greater association with hypochondriasis, which is associated with a wide variety of vague and non-specific complaints about bodily functioning. Secondly, they were also associated with depression, characterized by poor morale, lack of hope in the future, and a general dissatisfaction with one’s life. Patients also exhibited tendencies towards schizophrenia associated with bizarre thoughts, peculiar perceptions, social alienation, poor familial relationships, difficulties in concentration and impulse control, lack of deep interests, disturbing question of self-worth and selfidentity, and sexual difficulties. Lastly, CSR patients were associated with hysteria, and measured five components — poor physical health, shyness, cynicism, headaches, and neuroticism.7 These results were also similar to the Korean study of Yoon that used the MMPI questionnaire and showed that the three neurotic scales of hypochondriasis, depression, and hysteria were significantly higher in CSR5 . Another study in Germany using MMPI demonstrated that CSR patients scored more highly on the hypochondria and hysteria-scale.6 The MMPI questionnaire is widely used because of its large existing research base and familiarity to psychologists. It is designed with 10 clinical scales that assess 10 major categories of abnormal human behavior, and four validity scales that assess the person’s general test-taking attitude and whether he has answered the test truthfully and accurately.7 It is worth noting that utilizing the same tool may have contributed to the consistency of the results in the studies mentioned above.

Other studies reported used other types of psychometric tools that showed different psychological profiles for CSR patients. In the study of Yanuzzi which used the Jenkins Activity Survey, most CSR patients had type-A personality.1 The major components of type A behavior are: competitive drive, sense of urgency, aggressive nature, and a hostile temperament.1 Our study revealed that only 33% of the sample population had type A personality using the MMPI. Several MMPI scales can be associated with type A personality, such as hypochondriasis, psychastenia, depression, psychopathic deviate, and social introversion. A type A individual will most likely score high in hypochondriasis, psychastenia, depression, and social introversion, while they may score low in psychopathic deviate.9 The difference in these results may be due to the cultural differences and different coping mechanisms of Filipinos compared to other races included in the other studies. The different psychometric tools used may also have contributed to the differences in these results. The study by Spahn, which used the 16 PF-Questionnaire, revealed that CSR patients showed heightened emotional instability, insecurity, flexibility, and spontaneity.4 Two studies by Conrad that used the Symptom Checklist 90-R, Complaints questionnaire (B-L), and Toronto Alexithimia Scale revealed that patients with CSR had elevated distress and were more stressed (Table 4). Therefore, different psychometric tools have revealed differences in the psychological profiles of CSR patients. To obtain a more extensive interpretation of CSR patients’ psychological profiles, it is recommended that future studies utilize at least two psychometric tools. The results of this study also showed that CSR patients were also associated with tendencies to schizophrenia and depression, generally regarded as more serious psychological conditions. It is recommended that further investigation into the link between CSR and these conditions be performed, and that more patients be recruited to further evaluate and differentiate their psychological profiles. Lastly, it is recommended that studies on a molecular level be conducted to determine the relationship between the psychological profile of a patient and its effect on the retinal pigment epithelium. 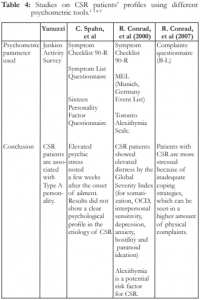