Corneal blindness is the 4th cause of blindness globally and penetrating keratoplasty (PKP) is one of the most commonly performed surgeries for corneal opacities. In the United States, it has become the most frequently performed method of transplantation.1,2 There are many complications that can occur following PKP.3
Allograft rejection leading to graft failure and severe graft astigmatism not amenable to contact lens fitting are major problems in PKP.4 These complications, however, do not limit the visual potential of the eye. Glaucoma, on the other hand, is one of the most problematic complications after PKP; it is potentially visually threatening causing irreversible optic nerve damage.5-8 The management of glaucoma post PKP is difficult. When medical therapy has failed, surgery is the next step especially in intractable glaucoma. Surgical treatment options include trabeculectomy with or without anti-metabolites, drainage devices, and cycloablation.9-11 There are few studies that showed glaucoma control in the different surgeries in post PKP patients. A retrospective, noncomparative, case series by Wudunn showed that combined trabeculectomy with PKP had a lower success rate of intraocular pressure (IOP) control but a higher graft survival with fewer complications.12 Other studies showed the effect of glaucoma drainage devices (GDD) on IOP control at 1 year significantly lowered IOP with a high corneal graft survival.10,13-15 One study, however, reported that although GDD successfully lowered IOP at 3 years, corneal graft survival was low.10 Thus far, there have only been few studies comparing trabeculectomy, glaucoma drainage device, and cyclophotocoagulation procedures in terms of IOP lowering and showed no significant difference.11 This study determined the IOP control of trabeculectomy with mitomycin C augmentation (Trab MMC) versus glaucoma drainage device (GDD) implantation in glaucoma management after PKP .

Medical records of patients who developed increased intraocular pressures or glaucoma not controlled by medications alone after undergoing penetrating keratoplasty at the Department of Ophthalmology and Visual Sciences of the Philippine General Hospital from October 2006 to June 2012 were reviewed. Patients with at least 1 month follow up after undergoing either Trab MMC or GDD (either Ahmed or Baerveldt) implantation were included in the study. The following information were obtained for each patient: age, gender, corneal diagnosis before PKP, details of keratoplasty in terms of graft vs donor size, other concomitant operations, presence or absence of glaucoma before or after keratoplasty, visual acuity, intraocular pressures, glaucoma
medications before and after PKP, graft status before glaucoma treatment and at final visit, optic nerve and visual field status, type of glaucoma, and the glaucoma procedure performed and complications if any.
Three primary outcomes were evaluated: graft status, postoperative IOP, and visual acuity (VA). Controlled IOP with and without medication was defined as IOP greater than 6 but less than 20. Summary of quantitative data (e.g., age, followup period, number of glaucoma medications, and IOP) were expressed in mean, standard error (SEM), and range. Visual acuity was expressed in median and interquartile range (IQR), while categorical data (gender, laterality, diagnosis, causes, graft status, number of patients with controlled IOP) were expressed in counts and percentages. Student’s ttest and Mann-Whitney test determined if there were differences in the mean and median results, respectively, between Trab MMC and GDD. Paired t-test determined if there were differences in the mean IOP control and number of medicines taken before and after the surgery. Wilcoxon Signed Rank test determined if there was a difference in the visual acuity before and after the surgery. McNemar’s and Fisher’s exact tests compared the percentages and Kaplan-Meier survival analyses compared the surgeries and their effects on IOP control and graft failure. All the statistical tests were performed using
SPSS 17.0; p-values less than 0.05 indicated significant differences.

RESULTS
Out of the 222 medical records reviewed, 23 patients, mean age of 55.17 years (range, 25 to 79), were included in the study. Of these, 11 (47.8%) had Trab MMC and 12 (52.2%) GDD implantation. There were 16 males (7 Trab MMC and 9 GDD) and 7 females (4 Trab MMC and 3 GDD). There was no significant association between gender and the glaucoma surgery performed (Table 1). The mean age of patients who had Trab MMC (58.09 ± 5.14) and GDD (52.50 ± 3.05) was not different (Table 1). The mean follow up was 10.66 months. There was no difference in the length of follow up between the two surgeries (Table 1). There were 13 right and 9 left eyes that had the glaucoma surgeries. There was no significant association between laterality and the type of surgery (Table 1). The most common diagnosis was pseudophakic bullous keratopathy in both surgeries (39.1%) and the most common cause was decompensation (47.8%), followed by fungal infection (13%). There
was no association between any of the diagnoses and causes and the type of glaucoma surgery (Table 1). Eleven patients (8 Trab MMC and 3 GDD) 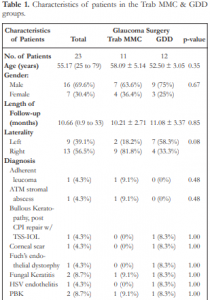 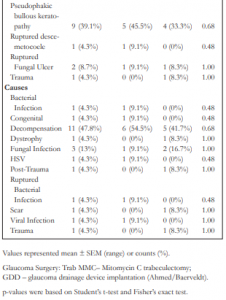 had PKP only, and the rest had various surgical combinations with PKP (Table 2). 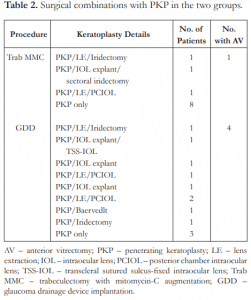 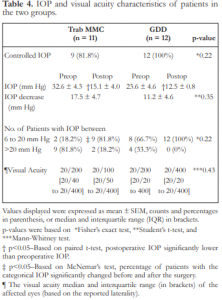 There were no differences in the pre- and post-surgery visual acuities of patients in the Trab MMC (p = 0.08) and GDD (p = 1.00) groups. There was also no difference (p = 0.43) in the postsurgical visual acuities of patients between the 2 groups. There were no differences in the mean number of glaucoma medications between the 2 groups before (p = 0.92) and after (p=0.18) glaucoma surgery. Both groups (Trab MMC: p = 0.02; GDD: p<0.001) had significantly reduced number of medications after the surgery (Table 5). All were on one topical medication postoperatively, controlled usually with an aqueous suppressant (timolol). 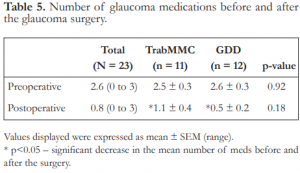 Using Log Rank test [χ2 (df = 1) = 1.899, p = 0.17], there was no difference in the survival distribution of controlled IOP between the 2 surgeries indicating that there was at least 0.8 probability that both surgeries would have controlled IOP up to 33 months (Figure 1). 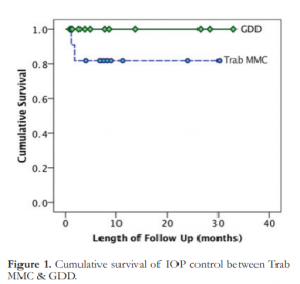 Only one patient (treated with GDD) had graft failure that occurred after 7.7 months. Using Log Rank test [χ2 (df = 1) = 0.196, p = 0.66], there was no difference in the survival distribution of the corneal graft between the 2 surgeries (Table 6, Figure 2). There were also no postoperative complications for both the PKP and the glaucoma surgeries. 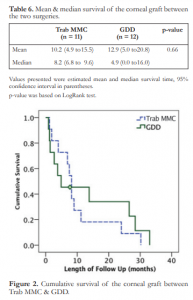 The participants in this study had a mean age in the 50’s. The most common indication for penetrating keratoplasty was pseudophakic bullous keratopathy, followed by fungal keratitis. There was only one corneal graft failure and it was not due to uncontrolled IOP. The rest of the corneal grafts maintained their clarity postoperatively. Of the 23 patients, 91.3% had controlled IOP after glaucoma surgery; 9 had Trab MMC and 12 had GDD. The mean IOP in both groups decreased significantly, with the number of patients with controlled IOP increased significantly in the Trab MMC group. There were no differences in visual acuities pre- and postglaucoma surgery in both groups. Before glaucoma surgery, there was no difference in the number of medications needed by the patients in the Trab MMC and GDD groups. After glaucoma surgery, the mean number of glaucoma medicines was reduced significantly in both groups, all maintained on one topical medication. There was no difference in the survival distribution of controlled IOP between the two surgeries. Similar to studies by Thompson, Wudunn and Stewart, the primary indication for penetrating keratoplasty was still pseudophakic bullous keratopathy.2,12,14 Like the Ayyala’s study,11 our study showed that Trab MMC and GDD were able to control the IOP. However, we were not able to do a survival analysis of both the IOP and the graft survival. We also showed that combined trabeculectomy with PKP did not have a lower success rate in IOP control. There were several limitations to this study that could have limited the statistical power; namely, the retrospective review and small sample size. A prospective and larger study is needed to better elucidate the different parameters affecting IOP control, especially in regards to the timing of the glaucoma surgery and corneal graft survival. In conclusion, our study demonstrated that trabeculectomy with mitomycin-C augmentation & GDD implant­ation were effective methods of controlling the IOP post keratoplasty. Both surgeries lowered the IOP and the amount of glaucoma medications postoperatively, promoting corneal graft survival over the long term. The visual acuities and the graft clarity were maintained in both groups.