Globally, more than half a million blinding injuries occur every year. Approximately 1.6 million people are blind from eye injuries, 2.3 million are visually impaired, and 19 million have unilateral visual loss1,2. In children, ocular trauma has been cited as the most common cause of acquired unilateral blindness accounting for 8-14% of the total injuries3,4. They are usually unintentional compared to adults. Because of the difficulty in classifying the different types of ocular trauma injuries, the International Society of Ocular Trauma of the United States Eye Injury Registry had formulated a standardized terminology for eye injury to facilitate a uniformed definition to characterize the clinical condition. The Birmingham Eye Trauma Terminology (BETT)5 system provided definitions for the commonly used eye trauma terms. (Figure 1). 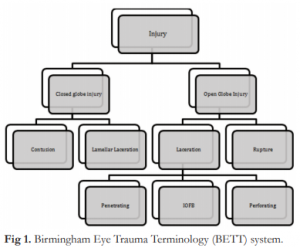 Epidemiology of pediatric trauma cases varies in different regions, with variables such as age, gender, type of injury, cause of injury, place of injury, and the management of ocular trauma. Ocular trauma patients admitted at various emergency departments varied in age. In the US, 25.4% occurred in children and youths aged 0 to 18 years old6. In Pakistan, children who sustained eye injuries had a mean age of 7.03 ± 3.61 years, most (42.9%) belonging to the school-aged group (6-11 years old)7. In Israel, almost half (47%) of the injuries were sustained by children younger than 17 years, mainly between ages 6-12 years old8 . In Brazil, children in the 0-5 year-old group were at greatest risk for ocular trauma9. There was a male predominance in patients with ocular trauma for all age groups, ranging from 64- 86% of the study population.7-13 Most of the ocular traumas occurred at home (44-46%), followed by outdoors (26-28%).7,8,11 Ocular trauma commonly was due to blunt injury (35-65%), followed by penetrating trauma (22.6- 30.5%)7,8,11,13. In Taiwan, the most common cause of injury was from falls, followed by trauma by fist or other parts of the body10. Closed globe injuries were the most common type of injury ranging from 51-78.1%, and open globe injuries accounted for 3.5-16.8%.7,10-12 Ocular trauma have been managed by varying measures, such as patching, warm or cold compresses, antibiotic or lubricant eyedrops, and surgical management7,13. The Ocular Trauma Score (OTS)14 was designed to provide a single probability estimate that an eye trauma patient would obtain a specific visual range at six months after the injury. It is used for standardizing assessment and visual prognosis in ocular injuries by considering several parameters (Table 1). The probability of all potential visual outcomes at six months is shown in Table 2.14 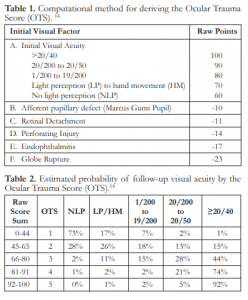 This study determined the demographics, incidence, aetiology, and severity of pediatric ocular trauma seen in a tertiary referral center and established the visual outcomes using the Ocular Trauma Score.

The study was a prospective, observational study done at the Emergency Clinic of the Department of Ophthalmology and Visual Sciences (DOVS), Philippine General Hospital from January 2012 to April 2012. Included were pediatric patients, aged 0-18 years, who consulted or were referred by other departments to DOVS. Informed consent were obtained from the parents or guardians. Those who went home against medical advise, who could not commit to the follow-up schedules, or who did not give consent to the study were excluded. The patients were examined and the following data were collected: age; sex; date, time, and place of injury; mechanism & nature of injury; medical & social history; complete eye evaluation including visual acuity on initial presentation; therapy instituted including medical & surgical interventions. After the initial consult and management, patients were scheduled for follow up after 1, 2, or 3 months. Based on the findings on initial consult, the Ocular Trauma Score (OTS) was computed. A numerical value (raw number) was assigned to each of the following variables: A) initial visual acuity (VA), B) relative afferent pupillary defect (RAPD), C) retinal detachment, D) perforating injury, E) endophthalmitis, F) globe rupture. The OTS was determined by calculating the sum of the raw points: A+B+C+D+E+F. If a specific variable was not present, its value was zero. Presenting visual acuities were divided into five categories (1 to 5) as 20/40, 20/200–20/50, 1/200– 19/200, LP/HM and NLP, similar to the OTS. Certain numerical values (Table 1) rendered to OTS variables were converted to OTS categories. The lowest possible OTS score was zero and the highest 100. Eye findings, including visual acuities on followup evaluation after 1 month, 2 months, and 3 months, were recorded. The OTS was compared to the final visual acuity of the patients after 3 months.

There were 95 pediatric patients with ocular trauma who were seen at DOVS from January to April 2012. Nine patients were excluded; 4 of which went home against medical advice and 5 were unable to adhere to the follow-up schedules for the duration of the study. A total of 86 patients were included in this study. 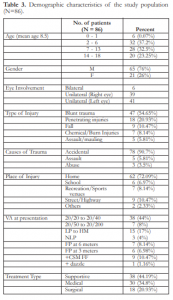 The male to female ratio was 3:1. Mean age was 8.5 years old, with the highest incidence of pediatric ocular trauma in the 2-6 year-old subgroup (Table 3) accounting for 32 cases (37.2%). Majority of the cases were due to accidents comprising 78 cases (90.7%), and the remaining due to assault and abuse (Table 3). Most injuries occurred at home accounting for 62 cases (72.09%) while others were injured in the streets, recreation/sport venues, or schools (Table 3). Blunt trauma accounted for 47 cases (54.65%), followed by penetrating injuries (20.93%) (Table 3). Other cases included fall, chemical/burn injuries or assault. Majority of the cases presented unilaterally; 39 cases involved the right eye, and 41 involved the left eye. The remaining 6 cases presented bilaterally. Snellen VA was available in 62 patients (72.1%). At the initial consult, 3 patients had no light perception (NLP), 15 had VA ranging from light perception (LP) to hand movement (HM), 7 had VA ranging from 20/200 to 20/50 and 38 had VA more than 20/40 (Table 3). Majority of the patients were discharged from the emergency clinic (73.26%) while the remaining were admitted for further management. Most were given supportive treatment that included compresses, placement of sterile strips/bandages, and irrigation (44.19%). Medical intervention was given to 30 (34.8%) and surgical intervention to 18 patients (20.93%) (Table 3). At one-month follow-up evaluation, 2 patients had already undergone enucleation and evisceration of the involved eye. The visual acuity improved in most patients. At 3 months, 48 patients had VA between 20/20 to 20/40, 8 LP to HM, and 4 NLP. All patients were already sent home by 1 month and followed up on an outpatient basis. By 3 months, 10 patients were still on medications and others were on supportive treatment. No additional surgical intervention was performed after one month of follow up. At the initial visit, 12 patients had relative afferent pupillary defect (RAPD), 17 had penetrating/perforating injuries, 2 presented with uptured globe, 1 had retinal detachment, and 5 were diagnosed with endophthalmitis. In computating for the OTS score, the different factors were converted into numerical values, the scores were added and converted into OTS categories. Eight patients were classified under group 1 (raw score 0-44), 10 under group 2 (raw score 45-65), none in group 3, 7 in group 4 (raw score 81-91), and 37 in group 5 (raw score of 92-100). Two cases from group 1 underwent enucleation and evisceration due to ruptured globe. The remaining 6 cases from group 1 had VA ranging from NLP toHM at 3 month follow up. In group 2, 3 cases had improvement in VA to more than 20/70, and 7 cases had VA ranging from LP to HM. All 7 cases in group 4 had improvement in VA to more than 20/40 and all in group 5 maintained the VA to >20/40 at 3 month follow up. Fifty (83%) patients corresponded to the OTS proposed final visual acuities, while the remaining 10 (17%) fell into the category one below or above the proposed final visual acuity (Table 4). 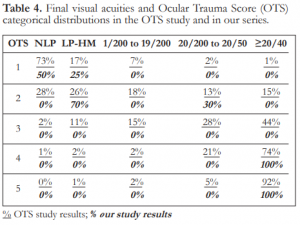 This 4-month study focused on the epidemiology of eye injuries in children aged 18 years old and below who underwent evaluation at a tertiary referral center. It described the frequency, distribution, causes, and other underlying factors related to the traumatic injuries and provided recommendations for prevention. In general, hildren are more susceptible to eye injuries because they have immature motor skills and limited common sense. They have a natural curiosity and are often seen imitating without regard to the risks and outcomes. Although most eye injuries are avoidable by simple preventive measures, many children suffer visual impairment that ca affect their psychosocial development.

Similar to other studies,7-13 most eye injuries occurred among boys which could be attributed to their more active behavior and their tendency to spend more time outdoors compared to the girls. This study also showed a predominance of injuries occurring in the toddler to school-age population similar to previous studies7-9. At these ages, toddlers are discovering their world and exploring their surroundings. A higher incidence of trauma in school-aged children was present since they spent most of their time in school where they were more exposed to the environment and were more physically active. There was also less parental guidance in schools or recreational centers. Majority of the trauma cases were accidental in nature as a result of natural curiosity and clumsiness in children. A small percentage were due to alleged abuse cases, seen in infants, and reported to have fallen from chairs or beds. Reported cases of trauma due to assault were found in older children who were involved in group fights. Similar to other countries, our study showed that most of the injuries occurred at home7,8,11, emphasizing the need for primary preventive measures in the home environment. Accident occurring in the streets was next in frequency where children would be seen playing, followed by the school where children spent most of the time away from home. In older children, injuries occurred frequently in recreational centers, such as in basketball courts. Similar to other studies, blunt trauma comprised the majority of ocular injuries in children7,8,11,13. Most of these injuries were related to play and toys were the most frequent objects hitting their eyes. There were also cases of children hitting or bumping into furnitures or doors when running around. Other objects causing injury included pencils/pens, hand/fist, aluminum rods, and stones. The second most frequent etiology of trauma was penetrating injuries, caused by wooden sticks/wood materials hitting their eyes while playing as the most common penetrating object, followed by metal rods that children played with. Other materials reported were nails, fork, stone, and plastic materials. Some injuries were due to falls, such as children falling from chairs, stairs, beds, terraces, or trees. Burn injuries were mostly due to hot liquids that spilled, or to flame burns and firecrackers. The chemical burn reported was due to a cleaning agent that splashed into the eye. The assault/mauling cases were mostly due to involvement in fights. Majority of the injuries in this study were blunt trauma and most vision were not impaired on presentation. Those with severe visual impairment (VA <20/200) were mostly due to penetrating injuries. Visual acuity with mild to moderate visual impairment improved after one month of follow up. Traumatic injuries that needed surgical intervention also resulted in improvement of vision after surgery. However, there were patients who had persistent severe visual disability, especially in those with endophthalmitis, retinal and choroidal detachment. These conditions were indicative of poorer visual prognosis. Prompt surgical intervention were given in the majority of the open globe injuries (penetrating injuries, ruptured globe). There were instances, however, where no surgical interventions were given specifically in those where there were signs of phthisis bulbi and one case of endophthalmitis with retinal detachment. The latter was managed medically. In this study, the Ocular Trauma Score was able to predict the visual outcome in 83% of the patients at 3 months. Our results were similar to the OTS population (Table 4), indicating that prognostic factors, such as the presence of globe rupture, endophthalmitis, perforating and penetrating injuries, retinal detachment, and development of RAPD significantly affected the visual acuities of these patients at 3 months. Other studies,15,16 however, reported lower accuracies of the OTS in predicting long-term visual outcomes. In summary, accidental blunt trauma among boys in the 2-6 year-old age group are common and should be attended to immediately. Most occurred at home while children were at play. Prognostic factors, such as poor initial visual acuity, RAPD, penetrating/perforating injuries, ruptured globe, retinal detachment, and endophthalmitis, significantly affected the final visual outcome at 3 months. The Ocular Trauma Score predicted the final visual acuity of pediatric trauma patients in 83%.