METHODOLOGY
Study Population Patients with type 2 diabetes, aged 40-85 years, were recruited from the outpatient department of a tertiary hospital Participation was voluntary and an informed consent was obtained. Those with dense media opacity obscuring the view of the posterior pole, glaucoma, age-related macular degeneration, high myopia were excluded. Patients who have other retinal diseases or had undergone ocular procedures that made classifying the diabetic retinopathy difficult were also excluded. Determination of Ankle/Brachial Index (ABI) Ankle/brachial index was determined by measuring the resting systolic blood pressure with the patient in a supine position using a mercurial sphygmomanometer and a handheld doppler device (Otsuka Medical, Inc.). The ABI was computed using the lowest systolic pressure of either the dorsalis pedis artery or the posterior tibialis and the highest brachial systolic pressure. A cut-off value of <0.9 and >1.3
was used to define low and high ABI, respectively.11

Early morning urine aliquots were obtained from the patients. The dipstick was dipped in urine for 5 seconds, leaving the buffer coating just above the surface of fluid, and the reading was performed exactly 5 minutes after dipping.12 Discrete readings of 0, 10, 20, 50, and 100 mg/ml provided a semiquantitative estimation of albumin concentration.

Data were provided as the mean +/- standard deviation for continuous variables or percentage for categorical variables. Baseline characteristics between the two groups were compared using the z-test. For testing the association of diabetic retinopathy with ABI and microalbuminuria, the binary logistic regression was used. A level of p<0.05 was considered statistically significant. Analyses were performed using SPSS version 17.

RESULTS
The presence of diabetic retinopathy was confirmed in 24 of the 49 patients (49%) who were qualified for the study. Of these, 11 (45.8%) were in the mild group and 13 (54.1%) severe group. The general characteristics of the study groups with and without retinopathy are summarized in Table 1, showing no significant differences between the 2 groups except for duration of diabetes of more than 10 years. 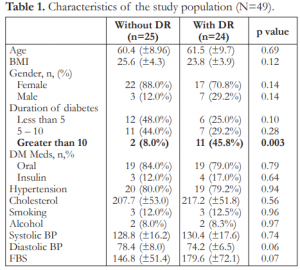 DISCUSSION
The findings in our study correlated with the results of large population-based studies in the literature3,6 where positive associations were reported between diabetic retinopathy and the presence of ABI abnormalities and microalbuminuria. However, there were few studies reported on these complications using the same patient population.14,15 In the assessment of diabetic retinopathy, we employed contact lens biomicroscopy for optical quality and greater axial magnification. This methodology differed from those in the reported literature where fundus photography was commonly used for evaluation.5-8 Logistic reasons aside, we believed that it reflected the primary method of diagnosing diabetic retinopathy in the local clinical setting. The interval between determination of ABI and microalbuminuria and that of the ophthalmic examination in our study was less than a month. We did not find any literature describing the optimal time between the examinations. However, comparing the study of Kawasaki et. al6 where intervals reached up to 2 years in some cases, ours was significantly shorter. With this modification, we believed that we have minimized the chances of including subjects whose retinopathy status was worse on ophthalmic exam than when the ABI and microalbuminuria were determined. A low ABI score (<0.9) has classically been used as a marker for PAD and as a predictor of increased morbidity and mortality.6,7,9 A critical review of ABI by Khan and colleagues showed up to four-fold increase in cardiovascular disease and mortality in patients with abnormal ABI.11 We used the low ankle pressure method for determining ABI (LAP ABI) wherein sensitivity and specificity were reported as 89 and 93%, respectively. A high ABI score (>1.3) was considered abnormal but not indicative of PAD. Rather, it denoted vessel incompressibility.11 The Strong Heart Study showed that low and high ABI scores were equally predictive of cardiovascular disease & mortality among patients.16 Hence, in our analyses a low or high ABI score was reported as an abnormal finding. Our findings showed that an advanced stage of diabetic retinopathy was associated with an increased likelihood of having an abnormal ABI score. Microalbuminuria is defined as urinary excretion of 30-300 mg/day. It is believed that its presence does not indicate presence of a kidney disease per se, but rather a secondary process affecting kidney physiology.17,18 The urine micral test provided a semiquantitative estimation of albumin excretion with a reported sensitivity of 87-89% and specificity of 88-98% with overall accuracy of 88-92%12 in detecting microalbuminuria. We found a significant association of advanced diabetic retinopathy with the presence of microalbuminuria. This may be explained by the view that microalbuminuria might represent a generalized vascular endothelial dysfunction.3,17,18 We found no significant association between milder stages of diabetic retinopathy and microalbuminuria. Limitations of this study should be noted. We have a relatively small sample size and as a crosssectional study, it did not study the cause-and-effect relationship among diabetic retinopathy, albuminuria and ABI scores. Moreover, our diabetic retinopathy grading did not employ stereoscopic fundus
photography which is considered the gold standard. The strengths of this study were the use of a population of purely type-2 diabetics, the short interval between determination of ABI and microalbuminuria and assessment of retinopathy, and the ability to study the association of diabetic retinopathy with ABI and microalbuminuria in the same population. In conclusion, our study showed that patients with severe diabetic retinopathy were more likely to have abnormal ankle/brachial index scores and microalbuminuria. Thus, those presenting with severe diabetic retinopathy were not only at risk of losing their sight but also at higher risk of developing lifethreatening systemic vascular and renal complications of diabetes.