Retinopathy of prematurity (ROP) is a retinal disease of preterm infants with a wide spectrum of presentation, from mild transient retinal changes to severe vaso-proliferation, which may lead to retinal detachment.1,2 It is a significant and a potentially avoidable cause of childhood blindness.3 Sixty percent of childhood blindness in developing countries, the Philippines included, is due to ROP.4,5 We are in- cluded among the nations who are at high risk for blindness due to ROP, with 9-60 blind infants per 1,000 births due to inadequate neonatal care and ROP screening.6 Prompt screening and detection has been established to reduce complications of ROP among infants at risk.7 The financial cost of supporting one child blinded by ROP has been estimated to exceed the cost of screening and treatment; hence, the need for screening appropriate for the population of babies in a given locale.8,9 However, ROP screening is only effective if no baby with severe ROP is missed.10

Published studies showed “younger and smaller” babies with ROP were observed in developed countries whereas “older and bigger” babies with ROP were reported in developing nations.5-21 In 2005, Gilbert reported that 13% of 1,091 infants with severe ROP from 10 developing countries were missed because these exceeded the screening cut- off of ≤32 weeks gestational age (GA) and ≤1,500 grams birth weight (BW).5 In 2006, Chen reported a missed-out rate of 16.2% out of the 114 Chinese babies seen with severe ROP and who were also outside the same 32-week and 1,500-gram cut-off.12 A significant number of published studies from various developing countries have described these babies with >32 weeks GA and >1,500 grams BW, with the oldest at 36 weeks GA and heaviest at 2,600 grams BW and with missed-out rates of 6.6-28.3%.5-21 As reported in the 3rd World ROP Congress in Shanghai in 2012,many developing countries, such as China, India, Thailand, and Vietnam, have already included older and heavier preterm babies, as old as 33-36 weeks GA and 1,750-2,000 grams BW, in their national ROP screening criteria.5,12-14, 20, 25-28 These older and bigger babies fell outside our existing Philippine Academy of Ophthalmology-Philippine Pediatric Society local screening criteria of GA ≤32 weeks and BW ≤1,500 grams.11 These data were also supported by anecdotal reports from our local retina specialists and pediatric ophthalmologists who have treated babies with severe ROP born >32 weeks GA and >1,500 grams at birth and who were not screened early because they were above our existing screening criteria.

Although local studies on ROP have validated the applicability of the local ROP screening criteria, there is no evidence at present that have determined whether babies with ROP >32 weeks GA and >1,500 grams BW are missed.17-19 We need to establish our missed-out rates as our institutional ROP incidence rates do not truly reflect our current ROP scenario.

This study determined if preterm babies >32 weeks GA and >1,500 grams BW developed ROP and who were thus “missed” with the existing local criteria. It also determined the incidence of these “missed babies” and described their profile (GA, BW, severity of ROP, and associated risk factors). The data provided information on whether there is a need to modify the 2005 local ROP screening criteria and determined the appropriate upper limit for GA and BW for screening that can provide a safe and efficient “cut-off” for detecting severe ROP.

This is a multi-center, retrospective cohort, observational study using data on ROP screening from the medical records of infants in the Neonatal Intensive Care Unit (NICU), nursery, ward, and outpatient department (OPD) of 4 institutions for the year 2011-2013. The collaborating institutions were St. Luke’s Medical Center Quezon City (SLMC), Dr. Jose Fabella Memorial Hospital (Fabella), East Avenue Medical Center (EAMC), and Ospital ng Makati (OSMAK). In these institutions, the respective Department of Ophthalmology has been proactively encouraging their Department of Pediatrics to refer preterm infants with ≤36 weeks GA for ROP screening. The screening criteria were deliberately set past the 32-week cut-off to avoid missing babies.

Institutional review board approval was not required because the data collected pertained to routine clinical care of preterm infants (e.g. GA, BW) and ophthalmologic care (e.g. ROP diagnosis, stage, and treatment) of babies referred for ROP screening. These data were the results obtained from previous ROP screening exams and treatments that adhered to standardized protocols and the prerequisite of which entailed parental consent.

Data on ROP from the medical records of previously screened babies, ≤36 weeks GA, regardless of BW and status of clinical course, from private and charity services were included. Data collated included the following: GA by last menstrual period, BW, risk factors (maternal and neonatal), and results of the ROP screening. The worst ROP diagnosis per eye and per infant was recorded. Outcome measures in- cluded: (1) incidence (missed-out rate) of preterm babies >32 weeks GA and >1,500 grams BW with ROP; (2) profile of the “missed babies” with ROP (GA, BW, severity of ROP, and risk factors (maternal and neonatal); and (3) proposed screening criteria 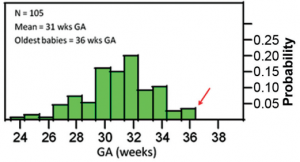 Figure 1. Distribution of babies with ROP according to gestational age (GA).

that included babies with severe ROP. In this study, Type 1 ROP and Stages 4-5 ROP were referred to as “severe ROP.”

Based on the assumption that the incidence of our missed babies with ROP will more or less mirror that of the larger retrospective study of Gilbert5 with an incidence of 13%, the sample size was calculated at 483 with 95% reliability and a maximum allowable error of 3%. Descriptive statistics were utilized and categorical variables analyzed using Chi-square test with the level of significance set at p≤0.05 and calculated using SPSS software for Windows (SPSS Inc, Chicago, Illinois, USA). 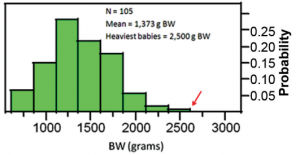 Figure 2. Distribution of babies with ROP according to birth weight (BW).

Profile of all babies with ROP

The oldest preterm babies that underwent treatment such as intravitreal injection of beva- zicumab (IVB) and laser indirect ophthalmoscopy (LIO) were born at 33-34 weeks GA with an incidence of 0.4% and 1.9% respectively. Heavier babies with BWs of 1,600-1,999 grams had IVB injection (0.7%) and LIO treatment (0.7%) for those weighing 2,000-

Table 1. Distribution of babies according to stage of ROP. 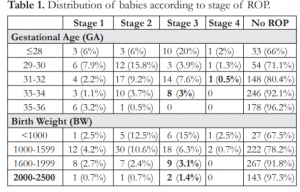 Table 2. Distribution of babies according to pre-plus and plus disease. 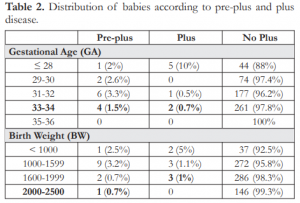 Table 3. Distribution of babies according to severity of ROP. 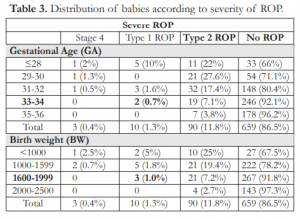 Table 4. Distribution of babies according to treatment of ROP. 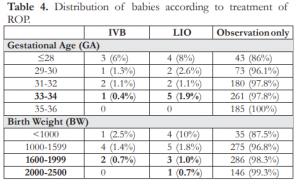 Table 5. Distribution of babies according to presence of aggressive posterior ROP (APROP). 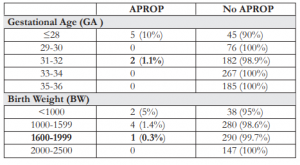 Table 7. Table 7. Distribution of babies and presence of ROP and risk factor according to institution.

Table 8. Distribution of babies according to presence of risk factor, GA, BW, and type of ROP. 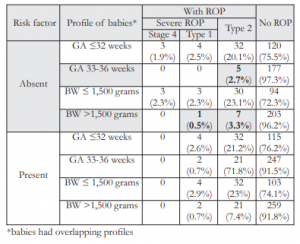 When sepsis was present, the incidence of ROP among babies >32 weeks GA was significantly increased (21.3% vs 2.8%) (Table 6). The same pattern was also seen with other risk factors when present among babies >32 weeks GA compared to absent risk factors such as respiratory distress syndrome (RDS), oxygen (O2) supplementation via continuous positive airway pressure (CPAP) or mechanical ventilation (MV), and blood transfusion and anemia. Likewise, the incidence of ROP among babies >1,500 grams BW was also significantly higher than in the absence of sepsis (18.8% vs 5.2%) or O2 supplementation via CPAP or MV (17.6% vs 5.3%). All comparisons were statistically different. 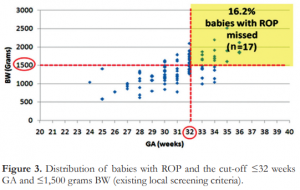 Table 9. Profile of the 17 missed babies.

Among the 105 infants with ROP, there were indeed older and heavier babies with >32 weeks GA and >1,500 grams BW. The oldest was at 36 weeks and the heaviest at 2,500 grams. The average GA and BW, as well as the oldest and heaviest babies reported in this study, did not differ largely from those reported in the local ROP studies,22-24 nor from published studies of other Asian countries.5-21

The risk factors that were significantly associated with higher incidences of ROP among 33-36 weeks GA and >1,500 grams BW included sepsis, RDS, O2 supplementation by CPAP or MV, and blood transfusion. However, there were babies (43%) who developed ROP with no associated risk factors. Among these babies were infants with GA >32 weeks and BW >1,500 grams.

When the existing local screening cut-off of ≤32 weeks GA and ≤1,500 grams BW was applied to our population, 17 babies (16.2%) were missed. This does not fall short from the 13% missed-out rate of Gilbert5 involving 10 developing countries and the 16% missed- out rate of Chen’s study12 on Chinese babies or from other missed-out rates from other low-income Asian countries.5-21 Of the 17 missed babies, there were 2 infants who had no risk factor, one of which had type 1 ROP and needed treatment. Therefore, these 2 babies would still be missed even if risk factors were considered. Although there were only 2 babies with ROP that were missed, they still merit screening as the consequences of blindness is devastating. According to the American Academy of Pediatrics, “the goal of an effective ROP screening program is to identify ALL infants who need treatment.”1

It appears that to “catch” the 17 missed babies in this study, the screening criteria should include the oldest and heaviest babies with severe ROP, approximately <35 weeks GA and <2,000 grams BW. After applying these proposed criteria to our population, we obtained a missed-out rate of 2% from the previously measured 16.2% (Figure 4). There were still 2 babies missed, both with type 2 ROP; however, these infants could still be screened with the inclusion

of risk factors as both had history of sepsis, blood transfusion, and O2 supplementation.

As this is a retrospective study, several limitations are inherent. We did not attempt to address the specific details of the maternal and neonatal risk factors affecting ROP, issues of variation in survival rates, levels of neonatal care and ophthalmologic expertise, as well as the economic implications of increasing the number of babies requiring ROP screening. The new recommendations aim to widen the current screening criteria, using the two consistent and established risk factors for ROP – prematurity and low birth weight.29 As ROP screening programs are evolving and may have intrinsic defects, such as over referral and under referral,10 we recommend reevaluation of the proposed criteria, if implemented, every 1-2 years, utilizing data from a prospective study.

MEMBERS OF THE RETINOPATHY OF PREMATURITY WORKING GROUP (ROPWG)

The authors would like to extend their deepest gratitude to Drs. Mary Christine Alice Tumale, head of the neonatology section; Darlene de Leon Salloman, neonatology fellow of Jose Fabella Memorial Hospital; Marian Ana and Angela Zuno, ophthalmology residents of Ospital ng Makati for their invaluable assistance in the data collection.