Inter- and Intra-Observer Reliability Among Retinopathy of Prematurity (ROP) Screeners

Retinopathy of prematurity (ROP) is a vaso- proliferative retinal disease of preterm infants which can lead to retinal detachment and severe visual impairment.1,2 It is a significant and a poten- tially avoidable cause of childhood blindness.3 The Philippines is one of the countries with high risk of blindness due to ROP, with an incidence of 9-60 blind infants per 1,000 births resulting from in- adequate neonatal care and ROP screening.4 Prompt screening and treatment have been proven to optimize management and reduce complications of ROP among high-risk babies.5,6 The financial burden to the society of one child blinded by ROP has been estimated to outweigh the screening and treatment cost.7,8 Hence, the need for ROP screening that is not only timely but reliable. Although the International Classification of ROP (ICROP) has made the evaluation more objective by providing standard photographs,9 ROP screening remains to be a subjective exam.10-15

In the CRYO-ROP study, 12% of eyes initially diagnosed as threshold disease were diagnosed as less- than-threshold during confirmatory examination by a second screener, within 3 days from each other. 11 There are inter-observer studies that described discrepancy in the diagnosis of plus disease and zone I ROP.12-15 The goal of an effective ROP screening program is to identify the infants who could benefit from ROP treatment.1 However, it necessitates screening that is accurate as well as consistent, especially in the identification of treatment-requiring ROP.11 Inconsistencies in diagnosing can lead to over or under treatment of preterm infants.11,13

In this light, this study (1) determined the inter- and intra-observer reliability in diagnosing ROP in terms of the stage, zone, and presence of plus disease among local ROP screeners involved in the ROP Working Group; and (2) determined the inter-observer reliability between 2 groups of subspecialties – retina specialists and pediatric ophthalmologists – within the ROP Working Group.

The ROP Working Group is the initiative of the Philippine Academy of Ophthalmology aimed to decrease the prevalence of visual impairment secondary to ROP. It is a group comprised of retina specialists and pediatric ophthalmologists who are active local ROP screeners and strongly dedicated to ROP advocacy. As each country has been encouraged to create ROP screening criteria appropriate for the babies of their locale,1 assessment of the reliability of our local ROP experts is also necessary as the competency and quality of screeners and experts vary in different populations. Moreover, no study at present has systematically evaluated reliability in the diagnosis of stage and zone of ROP, as well as the reliability of 2 groups of ROP experts – retina specialists and pediatric ophthalmologists.

This is a prospective observational study that utilized a test composed of 32 sets of images from 27 cases, five cases of which were repeated (131 fundus photographs). The fundus images were from 27 eyes of 24 infants, with and without ROP, who were previously photographed using a wide field digital imaging system (RetCam II-III; Clarity Medical Systems, Pleasanton, California, USA) at St. Luke’s Medical Center Quezon City and East Avenue Medical Center.

The fundus images collected were part of the routine ROP care, as well as objective ophthalmologic documentation, and none of the infants could be identified from the retinal images. None of the photo- graphs were taken for the sole purpose of this study. These photographs were obtained by their attending ophthalmologists who adhered to the standard protocols and the prerequisite of which entailed parental consent both for the screening exam and the photodocumentation and storage. There were no patient identifiers or annotations as to clinical data, gestational age, birth weight, laterality, or location of disc and lesions.

The primary author, who was not included among the test readers, collected as many high-quality images as possible. Poor quality photographs and those with no official diagnoses from their attending ophthalmologists were excluded. An online picture editor (www.pixlr.com/editor) was used to enhance the images. Enhancement was minimal and was limited to adjustments to exposure, brightness, and contrast. No photographs were cropped. The images were then collated into a downloadable Microsoft Office Powerpoint test. The images were randomly ordered. The five sets of images that were repeated were inverted 180o to avoid recognition of the recurring cases. 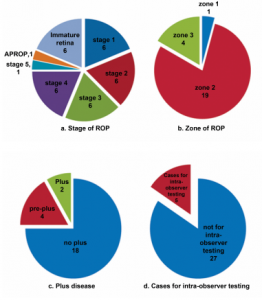 The target sample size included 16 members of the ROP Working Group. It comprised actively practicing retina specialists and pediatric ophthalmologists. They all had years of experiences in ROP screening and treatment, but their experience in RetCam image evaluation were varied. Informed consent was obtained from each participant. They independently downloaded the powerpoint test from a secure website. They were blinded to any information on the infants, except that they knew that cases of ROP and no ROP were included. They independently reviewed the powerpoint test and e-mailed their diagnosis to a secure e-mail address created exclusively for this study.

They were asked to evaluate each image, according to 3 key ROP observations based on the ICROP study,9 each with an ordinal scale: (1) diagnosis; (2) zone; and (3) presence of plus disease. “Diagnosis” included ROP stage 1, 2, 3, 4, 5, aggressive posterior retinopathy of prematurity (APROP), and immature retina. “Zone” referred to as zone I, II, and III while plus disease was subdivided into no plus, pre-plus, and plus disease. Participants were also asked to comment on their confidence rating of the RetCam image review as confident, somewhat confident, not confident. Options in each categorization were exclusive. The diagnosis of the attending ophthalmologist was used as the reference standard. The answers of the participants were compared against (1) each other as a group, (2) within themselves, and (3) as 2 groups (retina specialists and pediatric ophthalmologists).

Reliability pertains to the degree to which a measurement technique can be depended upon to secure consistent results upon repeated application.17 Descriptive statistics was utilized and reliability was measured using intra-class correlation coefficient (ICC) with a range of values from 0 to 1.0 (highly unreliable to perfect reliability).17 Acceptable reliability is assigned an ICC value of at least 0.6 (Table 1).18 Calculations were made using SSPS software for Windows (SSPS Inc, Chicago, Illinois, USA).

Based on the assumption that the incidence of our missed babies with ROP will more or less mirror that of the larger retrospective study of Gilbert5 with an incidence of 13%, the sample size was calculated at 483 with 95% reliability and a maximum allowable error of 3%. Descriptive statistics were utilized and categorical variables analyzed using Chi-square test with the level of significance set at p≤0.05 and calculated using SPSS software for Windows (SPSS Inc, Chicago, Illinois, USA).

Of the 16 experts invited, 11 participated in the study with 5 retina specialists and 6 pediatric ophthalmologists. Most of the participants (64%) had, at the least, some experience with RetCam image review, while 18% (2) were experienced. Four (36%) participants reported no prior experience.

When compared as groups, the reliability between the groups of retina specialists and pediatric ophthalmologists consistently displayed high reliability 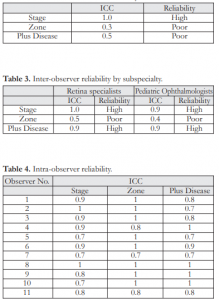 for stage and poor reliability for zone of ROP. Both also scored high in diagnosing plus disease within each group. However, when compared across the groups, there was difference in reliability due to differences in interpretation of plus disease.

On the other hand, intra-observer reliability was high for both staging and identification of the zone and acceptable for determining the presence of plus disease. This was consistent with the conclusion of Scott and associates that intra-physician agreement in a study of 2 examiners in ROP screening was high.15

Over-all diagnosis of the stage of ROP was consistently reliable for both inter- and intra-observer parameters. However, identification of zone of ROP and plus disease were sources of significant discrepancies. The poor reliability in identifying the zone may be due to the limitations of using fundus photographs. Limited images were available; some sets of photos for cases involving zones 2 and 3 did not include images of the disc or peripheral nasal area which served as landmarks when doing indirect ophthalmoscopy. These limitations may be overcome by capturing more quality images that show these landmarks.

According to Weiner and associates, factors affecting reliability included the observer, the instrument, or may be situational.20 There was varia- bility in the diagnosis of ROP based on the different inter-observer reliability indices among the participants. Chiang and Jiang explained that the varying interpretations among the observers even while viewing the same images resulted from subjective differences in judgment among the ROP screeners.11

Instrument-related factors affecting reliability pertain to the limitations of using wide field fundus photography. Although binocular indirect ophthal- moscopy remains to be the gold standard for ROP diagnosis,9 we used fundus images obtained by RetCam as serial examination on the same infant for those with significant safety concerns. RetCam is a commonly used instrument for pediatric retinal imaging with a wider field of view of more than 100o. However, it does not have the 3-dimensional advantage of indirect ophthalmoscopy for better assessment of retinal contours.21 This difference in perspective could have affected our findings especially since 4 participants had no prior experience with interpreting RetCam images.

Situational factors affecting reliability refer to the individual computer monitors of the participants which they used after downloading the powerpoint test containing the RetCam fundus images. Although the use of photographs ensured that all participants evaluated the exact same images and more or less ensured that the precision of the evaluation was not determined by the cooperation of the infant with the examination, it also has limitations. The luminance or resolution of the participant’s computer monitor display was not standardized nor the conditions during which they reviewed the images (i.e. clinic hours vs. home).

Indeed, ROP screening remains to be subjective because it is based on photographic standards and descriptive qualifiers rather than quantifiable measurements.11-13 The authors recommend including the disc and the peripheral nasal quadrant when doing wide-field fundus photography on infants using RetCam to facilitate identification of the zone of ROP. We also propose that standard images from the ICROP Revisited Study, especially images on pre-plus and plus disease, be placed at bedside during routine ROP screening to facilitate diagnosis. Adequate training in ROP diagnosis among screeners is crucial to ensure the highest level of patient care so that findings from major studies such as ICROP, CRYO- ROP, and ETROP trials can be applied properly and consistently.