Evidence on the prevention of postoperative endophthalmitis

An 82-year-old female with no apparent ocular problems, except for a brunescent cataract, underwent phacoemulsification with intraocular-lens (IOL) implantation. Postoperative medication consisted solely of antibioticsteroid eyedrops. One day after uneventful surgery, the patient developed severe pain, poor vision, and redness in the operated eye. Visual acuity was counting fingers at 1 meter. The eye had ciliary injection, grade 4 flare and cells, a small hypopyon, fibrin extending from the corneal wound, and a mildly edematous cornea. Intraocular pressure (IOP) was 24 mm Hg. Exudates behind the IOL were noted, but visualization was poor. Anterior-chamber and vitreous taps revealed gram-positive cocci. Could the ophthalmologist have prevented this complication?

Among patients undergoing cataract extraction, what is the most effective regimen that can reduce the risk of endophthalmitis?

A Medline search was performed using the keywords “endophthalmitis,” “cataract,” and “prevention.” The search was limited to randomized controlled trials (RCT). No studies were found that compared endophthalmitis rates using different perioperative prophylactic measures. Most studies reported used substitute outcome measures such as periocular bacterial load, intraocular penetration of antibiotics, and anterior-chamber contamination. After reviewing the abstracts, only one RCT was considered relevant to the clinical question.

Soto AM, Mendivil MP. The effect of topical povidone–iodine, intraocular vancomycin, or both on aqueous humor cultures at the time of cataract surgery. Ophthalmol 2001; 131: 293-300.

DISCUSSION
Validity criteria
This study was a randomized, double-masked clinical trial involving adult patients with senile cataract. Excluded were patients with black cataracts, uncontrolled glaucoma, ocular or systemic inflammation or infection, history of adverse reactions to vancomycin, antibiotic treatment 10 days before surgery, and previous ocular surgery. All patients underwent a complete ophthalmologic examination and periocular-skin preparation technique, and received the same preoperative medication. The same surgeon performed phacoemulsification with IOL implantation in the capsular bag in all the cases. There were no complications during surgery or after 2 months of follow-up. This study fulfilled the validity criteria as summarized in Table 1.

Results
The proportion of culture-positive anterior-chamber aspirates was significantly lower in the groups that received vancomycin (p = 0.032) (Table 2). The groups treated with topical povidone-iodine preoperatively showed a smaller proportion of positive cultures compared with the groups without povidone-iodine. The difference, however, was not statistically significant (p = 0.59). Even with significantly higher rates of culture positivity in the placebo group, postoperative endophthalmitis did not develop in any eye during the two-month follow-up period. The relative risk of bacterial contamination of the anterior chamber after uncomplicated phacoemulsification was 15% with povidone–iodine plus vancomycin, 38% with vancomycin alone, and 85% with povidone– iodine alone (Table 3). To prevent 1 adverse event, i.e., anterior-chamber contamination, 9 patients would have to be treated with povidone–iodine plus vancomycin, 13 with vancomycin, and 50 with povidone-iodine.

REVIEWERS’ CONCLUSION
The results of this study suggest that vancomycin in the infusion fluid during phacoemulsification may reduce anterior-chamber contamination. There is a trend towards 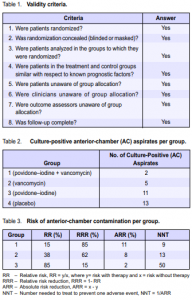 lower culture positivity with the use of preoperative topical povidone-iodine. Results might have reached statistical significance with a larger sample size.

UPDATES
A related randomized controlled trial,1 which included a larger sample of 644 eyes in 640 patients, reported similar results. Group 1 (322 eyes) received plain balanced salt solution (BSS) and Group 2 (322 eyes) received vancomycin and gentamycin in BSS. There was a significantly lower rate of culture-positive aqueous aspirates in Group 2 (22 out of 322 or 6.8%) compared to Group 1 (68 out of 322 or 21.1%) (p < 0.001). Although two patients in Group 1 developed postoperative endophthalmitis, the number was still not significant (p = 0.563, NNT=161.5). The authors concluded that the addition of antibiotics to the irrigating fluid decreased anterior-chamber contamination during phacoemulsification. The United States Centers for Disease Control and Prevention (CDC) has, however, cautioned against the routine use of vancomycin for prophylaxis due to emerging resistance of staphylococcus infections. In a systematic review of all English-language articles from 1963 to March 2003 cited in PubMed, the pooled estimate of the incidence of acute endophthalmitis from
3,140,650 cataract surgeries was 0.128%.2 The authors noted a rising trend in endophthalmitis rates from 1992
to 2003, which appeared to coincide with the shift to sutureless, clear-cornea phacoemulsification technique.
Moreover, the risk of endophthalmitis seemed to correlate with the type of cataract incision. Table 4 compares the relative risks of endophthalmitis by incision type. A variety of prophylactic regimens have been proposed
to reduce the risk of postoperative endophthalmitis. In a systematic review, Cuilla et al. concluded that only
preoperative povidone–iodine was moderately important to clinical outcome (B or intermediate clinical recommendation); all other prophylactic measures, including preoperative topical antibiotics, postoperative subconjunctival antibiotic injection, and antibiotics in irrigating solutions received a C recommendation (possibly relevant but not definitely related to clinical outcome) due to weak and conflicting evidence.3

Because postoperative endophthalmitis is an uncommon clinical outcome, research in this area has
mostly relied on retrospective case series or surrogate end points such as bacterial load in the conjunctiva or aqueous aspirates. Theoretically, reduction of ocular surface flora should decrease the risk of anterior-chamber contamination and endophthalmitis. However, the relationship between positive cultures from ocular tissues and postoperative intraocular infection remains unclear. To evaluate the efficacy of these prophylactic measures, a randomized controlled trial would require thousands of subjects to achieve sufficient power. Such a study is now underway. The Antibiotic Prophylaxis for Cataract Surgery study by the European Society of Cataract and Refractive Surgeons (ESCRS) will compare the efficacy of levofloxacin, cefuroxime, or both to controls in the prevention of postcataract surgery endophthalmitis (www.clinicaltrials.gov/ ct/gui/show/NCT00136344). A total of 35,000 cataractsurgery patients will be randomized to 4 groups (n=8,750/ group): (1) perioperative, topical levofloxacin, (2) intracameral cefuroxime, (3) a combination of the two, and (4) placebo. All patients will receive povidone–iodine preoperative prophylaxis and topical levofloxacin from days 1 to 6 after surgery. Expected date of completion is September 2006.

RESOLUTION OF THE CLINICAL SCENARIO
Current evidence suggests that vancomycin reduces the risk of anterior-chamber contamination. However, there is no evidence that a positive culture from anteriorchamber aspirates will result in endophthalmitis. The use of vancomycin for prophylaxis is strongly discouraged because of concerns regarding antibiotic resistance.
Hence, although this 82-year-old patient could have benefited from intraocular vancomycin, it can not be concluded that such a regimen would have prevented endophthalmitis. Factors such as potential ocular toxicity, cost-benefit ratios, as well as compliance with existing guidelines on the judicious use of antibiotics, should always be borne in mind whenever one contemplates using antimicrobial agents for prophylaxis.