Surgical interventions for the treatment of primary pterygia

A 30-year-old overseas contract worker consulted the outpatient department for a noninflamed, large, slightly vascularized, fleshy mass that encroached on the limbus of the right eye and reached the paracentral area of the cornea. The mass gradually increased in size over the past 3 years, associated with occasional redness that spontaneously resolved without any medication. The vision in the right eye degenerated over the last year. There were no other ocular or systemic signs and symptoms, and no surgery was ever done in that eye. Visual acuity was 20/40 (correctable to 20/20) in the right eye (OD) and 20/20 uncorrected in the left eye (OS). Manifest refraction revealed an againstthe-rule astigmatism of –2.0 diopters OD and plano OS. The rest of the ophthalmic examination was normal. His agency instructed him to have the mass removed prior to departure for Dubai in about 4 months. Since the mass was already causing astigmatism and reduced uncorrected visual acuity, surgery was contemplated. The ophthalmologist on duty wants to know whether the traditional bare-sclera technique is still the best method to use in treating this disease and preventing recurrence.

Pertinent data presented include a noninflamed, fleshy mass that over a period of 3 years gradually crossed the limbal border into the paracentral area of the cornea causing a two-diopter against-the-rule astigmatism. In the absence of any previous eye surgery, this picture is compatible with a primary pterygium.

After identifying the ocular condition in the clinical scenario, a clinical question can now be formulated as follows: Among patients with primary pterygia, how effective is bare-sclera technique compared to adjuvant treatment with mitomycin C (MMC) or conjunctival autografting (CA) in minimizing pterygium recurrence?

anchez-Thorin JC, Rocha G, Yelin JB. Metaanalysis on the recurrence rates after bare-sclera resection with and
without mitomycin C use and conjunctival autograft placement in surgery for primary pterygium. Ophthalmology
1998; 82: 661-665. 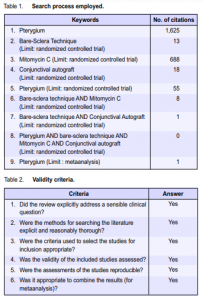 Study characteristics
Published studies between 1966 and 1995 involving a comparison of at least 2 of the following surgical
treatments of primary pterygia—bare-sclera resection, bare-sclera resection with intraoperative or postoperative mitomycin C application, and conjunctival autograft placement—were searched through Medline. A hand search of all references in relevant papers was also performed. Only controlled clinical trials that involved a preintervention patient-randomization process were included. Five studies were included in the analysis. The primary outcome measure was recurrence of the pterygia after primary surgical treatment. All studies had similar definitions of recurrence.

Validity criteria
A sensible clinical question was addressed by the reviewers: To determine, through a metaanalysis, the risk
for postoperative pterygium recurrence comparing baresclera resection alone, bare-sclera resection with intraoperative or postoperative mitomycin C application, and bare-sclera resection with conjunctival autograft
placement as treatment for primary pterygia. Table 1 shows that all the validity criteria were fulfilled. The search method for literature was reasonably thorough. Medline search of studies published between
1966 and 1995 and a hand search of all references in relevant papers were performed. Whenever 2 studies
included data from the same group of patients, the one with the larger number of subjects or longer follow-up
period was included. The inclusion of all studies using mitomycin C, regardless of how mitomycin C was applied, was appropriate. The exclusion of nonrandomized studies, uncontrolled studies, studies that combined the results of primary and recurrent pterygia, and studies using Beta irradiation therapy was also appropriate. The quality of each clinical trial was graded according to the method outlined by Detsky et al.1 Only studies with a score of 0.5 or higher were included. Two independent examiners collected data from each
study and performed study calculations using the Mantel– Haenszel method as outlined by Pagano and Gauvreau.2 A third masked observer mediated disagreements between the 2 independent observers. The final calculations were agreed upon by the 3 examiners. Test of homogeneity of the data yielded a chi-square of 1.23 for the bare-sclera technique versus conjunctival autograft and 3.06 for bare sclera with or without mitomycin C. The combined data were analyzed using Mantel–Haenszel method at alpha level of 0.05.

Applicability
The RCTs included in the metaanalysis analyzed the recurrence rates after at least 2 of the 3 surgical treatments for primary pterygia. Even though comorbid factors such as dry eye and environmental or occupational factors such as sun and wind exposure were not mentioned, the study is still deemed applicable to the clinical scenario.

STUDY AUTHORS’ CONCLUSIONS
The authors concluded that the risk of recurrence is at least 9 times higher for the bare-sclera technique alone
compared to bare sclera with adjuvant mitomycin C therapy, while it is at least 1.82 times higher for the baresclera technique compared to conjunctival autograft placement. However, the authors did not compare the 2 adjuvant measures and could not sufficiently say whether one technique would have a lesser probability of recurrence compared to the other.

REVIEWERS’ CONCLUSION
Whereas metaanalyses are subject to publication bias (where studies with nonfavorable results are no longer
published), the paucity of large RCTs that deal with our clinical scenario makes this article the best evidence to date. It is clear that simple bare-sclera technique without any adjunctive therapy has an unacceptable high risk of recurrence compared with the other 2 treatment modalities mentioned. Results of newer RCTs, when available, can be included in an updated metaanalysis to further strengthen the conclusions. Other techniques such as amnion-graft placement are being studied, and may offer another alternative to bare-sclera technique so that recurrence can be prevented. Improvements in the application of mitomycin C can also be studied in the future.

RESOLUTION OF THE CLINICAL SCENARIO
Surgical removal remains the best option for a patient who has a pterygium that induces corneal astigmatism
and significant visual impairment. The traditional baresclera technique has a high risk of recurrence. Either the concurrent use of mitomycin C as an adjunctive therapy or the placement of a conjunctival autograft is, therefore, most appropriate for our patient. Other factors to consider are the slight increase in cost, the longer surgery time, the possible mitomycin C-related complications, the skill of the surgeon in performing either surgery, and his/her experience in postoperative care of such procedures.