A 46-year-old male consulted for refraction. Best-corrected visual acuity was 20/20 for both eyes (OU), Jaeger 1 for near. Slit-lamp examination was normal. Intraocular pressure (IOP) was 25 mm Hg OU. Gonioscopy revealed iridocorneal angles that were open up to the ciliary body band OU. Funduscopy revealed clear media with no exudates or hemorrhages in the retina. Cup–disc ratio was 0.7 vertically and 0.6 horizontally with notching of the inferotemporal neuroretinal rim OU. Automated visual-field examination showed superior arcuate scotomas OU with no threat to fixation. The working diagnosis upon consultation was primary open-angle glaucoma. After all treatment options had been explained to the patient, a trial of medical therapy was chosen. Given the severity of the glaucoma, a target IOP range was initially set at 15 to 17 mm Hg. Nonselective beta-adrenergic blockers and prostaglandin analogues are two classes of medications that will most probably lower the IOP to the desired levels.

Among patients undergoing initial medical therapy for primary open-angle glaucoma, would latanoprost be more effective in lowering the IOP compared with timolol?

An electronic literature search was performed using Medline (PubMed). The key words used were “latanoprost” and “timolol.” The search was further limited to randomized clinical trials or metaanalysis published in the English language. Table 1 shows the search process performed.

The search was narrowed down to 5 articles. Abstracts of the articles were reviewed. One article employed ocular hypertensive subjects while another compared brimonidine and timolol. These studies were, therefore, excluded. Among all the metaanalyses obtained from the search, Zhang et al.’s had the most number of subjects and outcome measures. It was for this reason that the article was chosen for appraisal in resolving the clinical scenario.

Study characteristics
Randomized controlled trials (RCTs) of latanoprost versus timolol were retrieved systematically in the following
databases: (1) Medline, Embase, and Scientific Citation Index; (2) reference lists of original reports and review
articles, retrieved through the electronic searches; (3) manufacturers’ databases including Pfizer ophthalmology
database and Merck glaucoma database. The computerized searches covered the period 1966 to May 2005. Eleven randomized controlled trials were included in the metaanalysis. These trials were performed in various
countries including the United States, Canada, Japan, the Philippines, United Kingdom, and otherEuropean nations. Latanoprost 0.005 % or 0.006% eye drops were directly compared with timolol 0.5%eye drops in all of the studies. A total of 1,256 patients were included in the analysis. The primary outcome measure considered was percentage reduction in IOP. Other outcome measures included iris pigmentation, hyperemia, and systemic adverse reactions. Trials with subjects who had open-angle glaucoma (including primary and secondary open-angle glaucoma) or ocular hypertension were included.

The reviewers in this study addressed a sensible clinical question: To compare the IOP lowering effects of latanoprost versus timolol in primary open-angle glaucoma. As previously mentioned, the method for literature search was explicit and thorough. However, there was no attempt to look for unpublished reports.
The review adhered to strict guidelines in accepting and rejecting trials for the metaanalysis. Two independent
investigators performed data extraction. Any disagreement was resolved by discussion. The quality of the articles was assessed based on randomization, masking, and withdrawal as proposed by Jadad.1 Prior to combining the results of the different trials, test for heterogeneity was performed using Q statistic. In addition, sensitivity analyses were done to assess the effect of the quality of the randomized controlled trials in terms of studydesign and withdrawal rate. Table 2 summarizes the answers for the different criteria in assessing the validity of a metaanalysis. Metaanalysis of the trials revealed that latanoprost causes an additional 5% decrease in IOP (95% CI 3% to 7%) or an average 1.6 mm Hg (p < 0.001) compared with timolol.

Other outcomes analyzed were local and systemic side effects, specifically changes in heart rate and blood
pressure. Subjects under latanoprost therapy experienced more hyperemia and iris pigmentation than those given timolol. The risk for hyperemia wastwice that of timolol (RR = 2.20, 95% CI 1.33 to 3.65).The number needed to harm was computed at 21 relative to timolol. Therefore, treating 21 patients with latanoprost will, on the average, lead to 1 more patient developing hyperemia. Moreover, 4.39% of the patients treated with latanoprost developed iris pigmentation.In contrast, none of the patients treated with timolol experienced this effect. Timolol caused bradycardia in 4 of 236 patients after 3 or 6 months of treatment. These cases returned to baselinelevel after the paients were switched to latanoprost.

Compared with timolol, latanoprost achieves a greater amount of IOP reduction with less effect on heart rate in 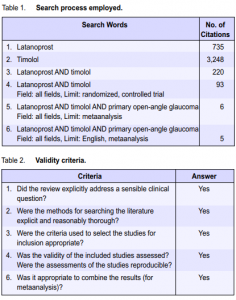 patients with primary open-angle glaucoma. In cases where higher levels IOP reduction are required or in
patients with bradycardia or heart block, latanoprost would be a better first-line drug than timolol. A higher incidence of conjunctival hyperemia and increased iris pigmentation is observed with latanoprost than with timolol. However, these minor ocular side effects have been deemed innocuous, and the increased iris pigmentation is not an issue among Asians due to their inherently dark irides. Although IOP reduction is a proven method of controlling glaucoma progression, future investigations should include preservation of visual field, optic nerve, and retinal-nerve-fiber layer as primary outcome measures. These outcome measures are more clinically significant and definitive than IOP reduction alone. Additional studies are still needed to compare various glaucoma medications with regard to compliance, cost-effectiveness, and their effect on the patient’s quality of life.

RESOLUTION OF THE CLINICAL SCENARIO
For the patient, medical therapy with latanoprost should be considered as initial treatment. Visual prognosis
for both eyes is good with the potential for adequate IOP control using a single agent. Cost-wise, the use of timolol may be advantageous. But in the long term, latanoprost would prove to offer more advantages with higher IOP lowering effect, better dosing regimen, and absence of cardiopulmonary side effects.