Epinephrine, but not dexamethasone, induces apoptosis in human retinal pigment epithelium cells in vitro: Possible implications on the pathogenesis of central serous chorioretinopathy

APOPTOSIS (programmed cell death) is a generegulated process that plays an important role in the normal physiologic turnover of cells and in various pathological processes. It differs from necrosis in a variety of morphologic and biochemical features. Morphologic changes in necrosis include cell swelling, degradation of organelles, rupture of cell membranes, and spillage of cellular contents into the extracellular space, resulting in an inflammatory response.

In contrast, apoptosis is characterized by condensation of the nucleus and cytoplasm, compaction and margination of chromatin, structural disorganization of the nucleus, and formation of cell fragments or “apoptotic bodies”. Apoptotic bodies maintain intact organelles and cell membranes, and are engulfed by neighboring phagocytic cells, thus no inflammatory response is elicited. Biochemical changes in apoptosis are characterized by enzymatic cleavage of DNA by endogenous endonuclease, often into multiples of 180 – 200 base pairs. In necrosis, DNA is cleaved into segments of random length. 6 Apoptosis may occur spontaneously or in response to physiologic stimuli which trigger cellular and molecular transformations that result in cell death. It may also be induced by a variety of exogenous toxic agents. In particular, it has been demonstrated that epinephrine can induce apoptosis in trabecular meshwork cells 7 and thymocytes, 8 and that corticosteroids can cause apoptosis in thymocytes, 5,9,10 eosinophils, 11 and leukemia cells. 12 The retinal pigment epithelium (RPE) performs a variety of functions, which include maintenance of homeostasis of the subretinal space and prevention of free water movement from choroid to retina. Central serous chorioretinopathy (CSCR) is a condition characterized by accumulation of fluid in the subretinal space, resulting in blurring of vision and metamorphopsia. The mechanism by which CSCR is caused is poorly understood. However, it is believed to result from dysfunction of the RPE and/or choroid. CSCR has been noted to be more prevalent among “hard-driving, tense, type-A” individuals who have high levels of endogenous catecholamine (i.e., epinephrine). In experiments performed in monkeys, it has been shown that intravascular administration of epinephrine can induce CSCR, and that the RPE underlying areas of CSCR undergoes degeneration. CSCR has also been noted to develop following systemic, 19,20,21,22,23 epidural 24 and inhalatory or intranasal 25 administration of corticosteroids. Whether apoptosis plays a role in the degeneration of human RPE cells and pathogenesis of CSCR has thus far not been investigated.
The aim of this study is to investigate whether epinephrine and dexamethasone, a corticosteroid, can induce apoptosis in human RPE cells in vitro. These findings may help elucidate the pathophysiologic mechanisms involved in CSCR.

Primary RPE cell cultures were prepared from the eyes of human donors after securing the necessary consent. The donors ranged in age from 28 to 50 years. The cells were processed within 48 hours of death. Methods similar to those described by Sheu et al. 26 were used to harvest the cells. Each eye was incised along the equator, and the anterior segment and vitreous were removed. The retina was carefully peeled off and cut away from the optic disc. The posterior half of the globe was then incised radially and the RPE was mechanically scraped with a cell scraper. The RPE was transferred to culture medium consisting of Dulbecco’s Modified Eagle’s Medium with 10% fetal bovine serum and 1% penicillin-streptomycin (Gibco, Buffalo, NY, USA), and grown to confluence in 25 cm2 tissue culture flasks (Greiner, Frickenhausen, Germany) maintained in an atmosphere of 5% carbon dioxide, 95% relative humidity, at a temperature of 37° C. Upon reaching confluence, the cells were trypsinized and subcultured in 75 cm2 tissue culture flasks (Greiner, Frickenhausen, Germany). All cells used for the experiments were in the third passage and were grown to confluence on 4-well chamber slides (Lab-Tek/ Nalge Nunc, Naperville, IL, USA). All cells in the primar y cell culture had regular polygonal epitheloid shapes and melanin granules, indicating that the cells were of homogenous RPE origin. In addition, the epithelial origin of the cultured RPE cells was confirmed by positive staining with mousederived anti-pancytokeratin Lu-5 (Dianova, Hamburg, Germany). For cytokeratin staining, the following technique was used. RPE cultures were fixed in 4% paraformaldehyde in phosphate buffered saline (PBS) for 30 minutes. They were then rinsed in PBS and incubated in 1% bovine serum albumin (BSA) for 10 minutes to block non-specific binding sites. The cultures were subsequently incubated with antipancytokeratin antibody diluted in PBS (working dilution = 1:20) for 60 minutes in a humidified chamber at 37° C. Negative controls were obtained by substituting the antipancytokeratin antibody with PBS. Following incubation, the cultures were washed in PBS and incubated in a 1:100 dilution of fluoresceinconjugated rabbit antimouse antibody (Sigma, St. Louis, MO, USA) at room temperature for 45 minutes in a humidified chamber. The slides were given a final rinse with PBS, coverslipped using the Slow Fade Light Antifade Kit (Molecular Probes, Eugene, OR, USA) as a mounting medium, and viewed with a fluorescence microscope (Leica Model DMRBE, Heerbrugg, Switzerland). 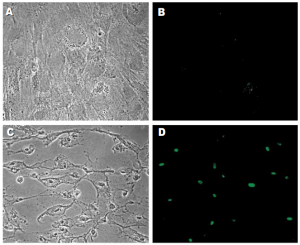 RPE cell cultures were evaluated serially for morphologic changes by phase contrast microscopy with the use of an inverted microscope (Olympus Model CK2, Tokyo, Japan).

RPE cells were processed for in situ apoptosis labeling using the terminal deoxynucleotidyl transferase-mediated dUTP nick-end labeling (TUNEL) technique. The In Situ Cell Death Detection Kit (Boehringer Mannheim, Mannheim, Germany) was utilized. This assay is a histochemical stain that labels 3′-OH ends of DNA fragments that are generated during the process of apoptosis. Nonapoptotic cells have relatively insignificant amounts of 3′-OH overhangs, and thus are not stained. The following is a summary of the in situ staining procedure. After incubation with the drugs, the RPE cell cultures were fixed with 4% paraformaldehyde in PBS for 30 minutes. The cells were subsequently washed three times in PBS for 5 minutes each wash. The PBS was aspirated, fluorescein-conjugated TUNEL reaction mixture was applied, and parafilm slips were placed over the specimens to spread the reagent evenly. The specimens were then incubated for 90 minutes in a humidified chamber at a temperature of 37° C. The parafilm slips were removed, the specimens were rinsed three times in PBS, and coverslips were applied on the slides using the Slow Fade Light Antifade Kit as a mounting medium. The slides were then examined with a fluorescence microscope. Positive controls were obtained by incubating nondrugtreated RPE cells in DNAse I (1 mg/ml) (Boehringer Mannheim, Mannheim, Germany) for 10 minutes at room temperature between the fixation and TUNEL reaction steps of the staining procedure. 29 Negative controls were obtained by substituting TUNEL reaction mixture with terminal-transferase-free label solution.

Following treatment with epinephrine (4×10 7 – 8×10 7 pg/ml), RPE cells underwent apoptosis, as evidenced by development of characteristic morphologic changes (condensation of the nucleus and cytoplasm; compaction and margination of chromatin) (Figure 1C) and positive TUNEL staining (Figure 1D). Apoptosis was induced in a dose- and time-dependent manner (Figure 2). Exposure to lower concentrations of epinephrine (10 2 – 2×10 7 pg/ml) for up to 7 days did not result in apoptosis.

No morphologic changes consistent with apoptosis were observed in any of the specimens treated with dexamethasone even after 7 days of incubation (Figure 1E). TUNEL staining was also negative in all specimens (Figure 1F). 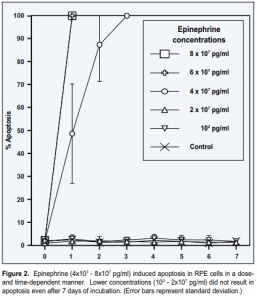 DISCUSSION
Using a monkey model of epinephrine-induced CSCR, Yoshioka and Katsume 13 have demonstrated degeneration of the RPE underlying areas of CSCR. Our finding that epinephrine can induce apoptosis in RPE cells may help substantiate this mechanism of degeneration and may contribute to the explanation of the pathogenesis of CSCR. It has previously been shown that stimulation of betaadrenergic receptors in RPE cells in vitro causes a net increase in cyclic adenosine 3′, 5′-monophosphate (cAMP) levels. 30 It has also been demonstrated that agents that elevate cAMP levels (i.e., epinephrine) can induce apoptosis. 31 These findings suggest that apoptosis in RPE cells may be induced by a beta-adrenergic/cAMP-mediated process. Clinical observations suggest that systemic administration of beta-blockers to patients with CSCR may improve vision and hinder recurrence of CSCR. 32 If RPE cell apoptosis indeed occurs in CSCR, these observations further support the hypothesis that it is mediated by a beta-adrenergic mechanism. Another possible mechanism by which apoptosis could be induced may involve oxidative byproducts of epinephrine. Epinephrine is metabolized by monoamine oxidase (MAO) into 3,4-dihydroxyphenylglycolaldehyde (DOPEGAL) and hydrogen peroxide, 33 both of which could act as inducers of apoptosis. 33,34,35 Experimental evidence suggests that MAO is present in RPE cells. 36 RPE cells could therefore metabolize epinephrine and undergo apoptosis in response to its metabolites. Drug doses used in toxicity studies include high, intermediate and low levels of a test compound. High doses allow one to observe toxic effects more readily. 37 In the current study, epinephrine levels at which apoptosis was observed were 8 x 10 4 to 1.6 x 10 6 times higher than endogenous in vivo levels. Since apoptosis could be difficult to detect due to its rapid kinetics and the relative paucity of cells that undergo apoptosis at any specific time point, 38 the administration of such high drug doses could facilitate observation of this process. Further toxicokinetic studies would however be necessary to determine how these high-dose acute findings correlate with the in vivo situation where prolonged exposure to lower drug levels is present. 37 Dexamethasone did not induce apoptosis at any of the tested concentrations. However, corticosteroids may cause an upregulation of adrenergic response by increasing the number of adrenergic receptors and/or increasing the responsiveness of each receptor. 39 A corticosteroidinduced increase in adrenergic response could possibly result in a cAMP-mediated apoptotic response similar to that observed in epinephrine-treated cells, and could also account for CSCR observed following treatment with corticosteroids. Such responses however could not be evaluated in these studies since no adrenergic agents were present in the cell cultures treated with dexamethasone. Although the pathophysiology of CSCR is poorly understood, various theories regarding its pathogenesis have been proposed. Spitznas 14 hypothesized that it is due to a cAMP-mediated reversal of the RPE fluid pumping action. According to this model, fluid is pumped in a chorioretinal, instead of a retinochoroidal direction. This leads to accumulation of fluid in the subretinal space. Initially, the fluid movement occurs transcellularly. However, the diffusion barrier (i.e., RPE) eventually breaks down, leading to direct leakage of fluid into the subretinal space. Although Spitznas proposed that the disruption of the barrier is due to strong fluid flow, it could also be due to degeneration of the RPE. Applying our findings to this model, the increase in cAMP could account not only for the reversal of the pumping action, but also for the breakdown of the diffusion barrier.

Gass 15 suggested that CSCR is due to focal areas of increased permeability in the choriocapillaris. Yoshioka and Katsume 13 and Marmor 16,17 proposed that defects in both the choroid and RPE are necessary for leakage of fluid into the subretinal space. The latter proposal is supported by the experimental observation that, in addition to degeneration of the RPE, diaphragms of the fenestrated endothelial cells on the inner sur face of the choriocapillaris disappear. 13 These defects in the choroid and RPE create a pressure head, resulting in such leakage. While our findings cannot fully explain the observed anatomic changes and proposed pathophysiologic mechanisms involved in CSCR, they could contribute to the explanation of the RPE component of this condition. Whether epinephrine causes CSCR by inducing apoptosis in RPE cells in vivo cannot be determined from this study. However, our findings provide a possible pathophysiologic mechanism for this poorly understood disease entity.