CANDIDEMIA is associated with significant mortality. Risk factors include chemotherapy and immunosuppresion, prolonged indwelling catheters, recent gastrointestinal surgery, intensive-care admission, intravenous drug use, and debilitating diseases, such as uncontrolled diabetes mellitus, chronic renal failure, and malignancies.
Candidemia can lead to endophthalmitis if not treated early and this eye infection often ends with a poor visual outcome. It is recommended that patients with candidemia be screened with funduscopy for intraocular seeding. The risk of endophthalmitis is virtually nonexistent if the infection can be identified and treated without delay with systemic antifungal agents. Unfortunately, the diagnosis of candidemia is difficult, with only 15 to 40% diagnosed early enough for appropriate treatment. The identification of this infection is difficult because of the low microbiologic sensitivity. Candida infection should be suspected in patients with diabetes or immunosuppresion who continue to have low-grade fever in spite of repeated broad-spectrum antibiotics.
We report an uncommon case of bilateral endogenous endophthalmitis that presented as a diagnostic dilemma because of negative vitreous cultures.

CASE REPORT
A 47-year-old Indian with poorly controlled type 2 diabetes mellitus was referred to the Ophthalmology Department of Penang Hospital with complaints of blurred vision for a week. He had loin pain, low-grade fever, and was generally feeling unwell. He had been treated with various intravenous antibiotics in three hospitals with no improvement over a period of three weeks.
At consultation, his visual acuity was bilateral hand movement. There was no eye redness. Examination, however, revealed bilateral panuveitis (severe inflammation in both eyes). There were fine keratic precipitates and pigment deposits on the lens surface (Figure 1). The anterior segment had 3+ cells. There were no iris nodules. The intraocular pressures were 6 mm Hg bilaterally. Posterior-segment findings included severe vitritis, vitreous “cotton balls” (Figure 2), multifocal retinal exudates, and fluffy chorioretinitis. The initial uveitis work-up was unremarkable. Differential diagnoses considered were infection with human-immunodeficiency virus and herpes, endogenous endophthalmitis, tuberculosis, syphilis, toxoplasmosis, and malignancy. No septic focus was found and blood cultures were negative. Because of the poor diabetic control and the presence of vitreous “cotton balls,” a fungal infection was suspected and vitreous taps were taken. Intravitreal vancomycin, ceftazidime, and amphotericin were also injected. The taps did not show any evidence of fungi or bacteria on staining and culture. A second set of blood cultures was done. These grew Candida albicans (Figure 3).
The patient was immediately started on oral fluconazole. A repeat vitreous tap taken prior to the second intravitreal amphotericin did not show any evidence of Candida on staining and culture. There was, however, no clinical improvement and the patient subsequently underwent pars plana vitrectomy, which resulted in improvement in vision to 6/24 in the right eye and counting fingers in the left. The vision did not recover completely because of premacular gliosis. 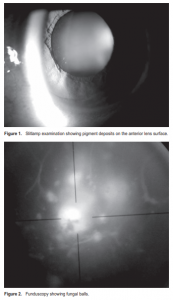 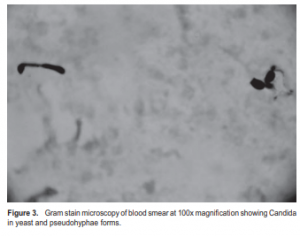 There is much debate as to the ideal treatment of candidemia. Amphotericin B 0.6-1.0 mg/kg/day used as first-line treatment for many years is effective but has significant side effects(50%).
Recently, fluconazole given 400 mg daily has been shown to be as effective without the side-effect problems, making this a more attractive option. In the future, the new antifungal caspofungin 50 mg daily, which has been shown to be highly efficacious, may overtake both amphotericin and fluconazole as the drug of choice for candidemia. The use of this new drug, however, is limited by its price. The utility of vitrectomy in Candida endophthalmitis has not been systematically studied but extrapolation from bacterial studies and anecdotal experiences suggested that the combination of vitrectomy and intravitreal amphotericin or fluconazole may be the most appropriate therapy. This patient was treated with oral fluconazole and intravitreal amphotericin with no improvement in vision. Vitrectomy, however, cleared the media and restored the patient’s vision.
In summary, panuveitis in patients with uncontrolled diabetes mellitus should raise the suspicion of endogenous endophthalmitis with Candida being the most important differential. Blood and vitreous cultures for fungi will increase the microbiological yield. Prompt treatment with suitable intravitreal and systemic antifungal agents together with vitrectomy may save the patient from a devastating visual outcome.