A prospective, randomized clinical trial comparing the effects of three viscoelastics on the corneal endothelium after cataract surgery

PRIOR to the use of viscoelastic materials (VEMs), corneal edema was the most common cause of failed cataract surgery. 1 Postoperative corneal edema or corneal decompensation results from corneal endothelial damage during surgery. 2, 3 The introduction of VEMs in the 1970s greatly improved the outcome and safety of anterior segment surgery. The use of VEMs facilitates lens implantation by deepening the anterior chamber, protecting the corneal endothelium and iris surfaces from mechanical and thermal damage, and absorbing offending molecules on the surface of intraocular lenses (IOL). VEMs are classified as being either cohesive or dispersive. Cohesive agents have high molecular weights and surface tension. They are primarily used to maintain the anterior chamber. Dispersive agents, meanwhile, have lower molecular weights and surface tension. They are primarily used to protect the corneal endothelium. Different VEM products and formulations have already been developed. These include sodium hyaluronate and chondroitin sulfate. 4-12 Combining the use of cohesive and dispersive agents during surgery has been advocated by some authors. 13 While many previous studies have compared the protective abilities of other products, the authors of this study believe that this is the first simultaneous comparison of Amvisc Plus (AP) (1.6% sodium hyaluronate, Bausch & Lomb, Rochester, NY, USA), Viscoat (VC) (3% Na hyaluronate + 4% chondroitin sulfate, Alcon, Fort Worth, TX, USA), Duovisc (DV) (a dual system consisting of Viscoat and Provisc [1% sodium hyaluronate], Alcon, Fort Worth, TX, USA). Parallel improvements in phacoemulsification techniques and instrumentation have also enhanced the safety and efficiency of cataract surgery. In the light of these advances, the authors conducted this study to determine whether the choice of VEM has a critical effect on endothelial cell count and corneal edema following cataract surgery.

METHODOLOGY
Adult patients from the University of the PhilippinesPhilippine General Hospital and the Asian Eye Institute who were scheduled to undergo phacoemulsification cataract surgery were prospectively enrolled in the study. Patients with a history of corneal pathology, corneal decompensation, trauma, glaucoma, and uveitis were excluded from the study. Also excluded were eyes with intraocular pressure (IOP) higher than 22 mmHg as measured via Goldmann’s applanation tonometr y, endothelial cell count of under 700 cells/mm2, , and corneal thickness of more than 650 µm. Sixty eyes of 48 patients were included in the study. Approval of the study protocol and informed consent forms were obtained from the Institutional Review Board of the two centers prior to the start of the study. 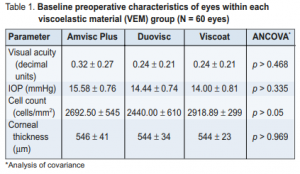 A clear corneal incision was made using a 3.2mm keratome. Continuous cur vilinear capsulorrhexis was done, followed by hydrodissection and hydrodelineation with balanced saline solution. Phacoemulsification was performed using the same machine for all eyes (Legacy 2000, Alcon Laboratories, Fort Worth, TX, USA). Nuclear disassembly was performed using a stop-and-chop technique.
After removing the remaining cortical material using an irrigation and aspiration (I/A) probe, the anterior chamber and capsular bag were filled with viscoelastic. For the DV group, the Provisc component was used to fill the chamber prior to insertion of the IOL. All eyes were implanted with a foldable one-piece acrylic IOL. The VEM was removed using I/A until the anterior chamber was cleared of all visible VEM. The phacoemulsification time, ultrasound power, and total operative time were recorded (Table 2). The patients were examined on the first, eighth, and fifteenth days after the operation.

RESULTS
The mean patient age was 67 ± 12 years (Figure 1). Eighteen patients (37.5%) were male. Thirty-seven (70%) patients underwent single-eye surgery while the rest underwent bilateral surgery.
The main outcome measures included postoperative visual acuity, IOP, endothelial cell count, and corneal thickness (Table 3). The mean visual acuity in decimal units on Day 15 were 0.75 ± 0.21 in the AP group, 0.74 ± 0.21 in the DV group, and 0.83 ± 0.25 in the VC group. Visual outcomes were not affected by the type of VEM used during surgery when other factors were kept constant (p > 0.740). Patient factors and period of follow-up demonstrated statistical significance in the differences in visual acuity (p < 0.001). Post-hoc analysis using Tukey’s method demonstrated that visual acuity significantly improved on Days 1, 4, 8, and 15 after surgery. From baseline, there was an average of 0.5 units (50%) of improvement on Day 1, 0.8 units (80%) of improvement by Day 8, and 0.4 units (40%) on Day 15. This suggests that the best improvement in vision after phacoemulsification was achieved between Day 1 and 8. The amount of visual improvement declined after Day 8 regardless of VEM used and phacoemulsification time and power. 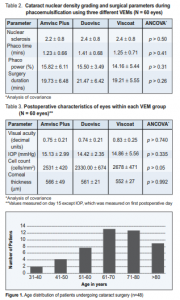 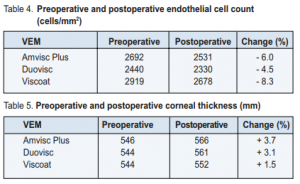 DISCUSSION
Endothelial cell loss is a primary indicator of corneal injury. Since endothelial cells do not regenerate, adjacent cells expand to fill in the gaps. As a result, endothelial cell density or count decreases and cell size increases in response to injury. Endothelial cell hexagonality and corneal thickness have been shown to increase as a result of corneal stress. 2, 3 Corneal thickness is regulated partly by active transport of ions across endothelial cell membranes. Chemical, thermal, or mechanical insult that interferes with endothelial cell function may disturb its pump function, resulting in corneal edema. VEMs are used to protect the corneal endothelium during anterior segment surgery. While several products are available, it is unclear which products provide the best protection. Numerous studies have compared the performance of cohesive and dispersive types of viscoelastics during phacoemulsification. However, these studies have yielded mixed results. It has been suggested that dispersive viscoelastics provide better coating and protection of the endothelium while the use of cohesive agents, which are more easily removed from the anterior chamber, results in a decreased frequency of postoperative IOP rise. Other reports suggest that dispersive and cohesive agents do not differ significantly in terms of endothelial cell protection and tendency to cause postoperative IOP rise.
6-12, 15-17 Glasser et al. 6 and Probst et al. 15 found no significant differences in endothelial cell loss after phacoemulsification using either Amvisc Plus or Viscoat. These studies found that Viscoat has a higher likelihood of being retained during surgery and may confer better endothelial cell protection. The necessity of removing VEM completely at the end of the surgery to prevent postoperative IOP rise has also been investigated. 15-17 Davis and coauthors compared AP, VC, and OcuCoat (Bausch & Lomb, Rochester, NY, USA) and found that postoperative visual acuity and corneal thickness were similar, no matter what VEM was used.
12 It is possible that advances in phacoemulsification instrumentation and techniques may have sufficiently improved the safety and efficiency of cataract surgery such that the type of VEM used is of secondary importance. This belief is supported by a recent study by Kiss et al. It revealed similar changes in corneal edema and endothelial cell morphology, whether the VEM used during phacoemulsification was expensive or low-cost. 18 The results of this study support the findings of Kiss et al., showing that similar corneal endothelial and IOP changes occur regardless of the VEM used. The results of this study also suggest that other factors, such as patient age and degree of nuclear sclerosis, may be important determinants affecting the way the corneal endothelium recovers from surgery. The process of endothelial damage is likely to be multifactorial in nature. Surgical skill and technique are also likely to be important factors in determining surgical outcomes. While this study suggests that the type of VEM may not be critically important in most surgeries, it is possible that the type of VEM used may be important in selected situations such as in Fuchs’s endothelial dystrophy as well as other instances where there is endothelial compromise. More studies are needed to determine whether any VEM offers additional safety advantages in these selected cases. This study shows that the type of VEM used does not significantly affect postoperative IOP, endothelial cell count, and corneal thickness after uncomplicated phacoemulsification with foldable intraocular lens implantation.