Department of Ophthalmology and Visual Sciences,

Visual impairment (VI) in children is a significant public health concern because it negatively affects the children, their family, and the society.1 Visually impaired children are more susceptible to chronic physical and mental health conditions, social problems, accidents, and mortality.2 According to World Health Organization (WHO), the estimated global financial cost of VI in terms of loss of earning capacity is between USD 6 trillion and USD 27 trillion.3

Few studies are available regarding the quality of life (QoL) of children with VI. The lack of QoL questionnaires for children is the basic limiting factor in conducting researches in this very significant field.1 In the Philippines, there is no available study discussing the burden of childhood VI. Its impact on the QoL of Filipino children and their families is left unexplored.

In recent years, QoL questionnaires have been developed to measure the impact of disease or treatment on a patient’s life and self-esteem, performance in daily living activities, social interactions, emotional well-being, and independence.4,5 Among these, the Children’s Visual Function Questionnaire (CVFQ) was developed as an instrument to assess the QoL of visually-impaired children aged 0 to 7 years old.6 The CVFQ is completed by parents or caregivers of patients with VI, and consists of questions that include several subscales, particularly: general health, general vision, competence, personality, family impact, and treatment difficulty. In 2016, Lee et al. translated and validated a Filipino version of CVFQ3plus that can be used locally to assess the QoL of Filipino children aged 3 to 7 years old with VI.7

The CVFQ3plus is a 40-item questionnaire generated from structured interviews or focused group discussions and expert opinions intended to evaluate the QoL of visually-impaired children aged 3-7 years based on the perception of their parents or caregivers. It was found to be valid and reliable for its intended population.8 Felius et al. established the internal consistency and reliability of the subscales of this questionnaire in a group of 773 pediatric patients with different ophthalmologic conditions.6 The computed Cronbach’s Alpha was 0.76 to 0.86. The overall Chronbach’s Alpha value computed of the Filipino version of the CVFQ3plus by Lee et al. and its comparison with the English version was 0.86 and 0.90, respectively.7 Results showed that the translated version is highly reliable and comparable to the English version.

According to Chadha et al., visual function of children is highly complex and an interplay of different factors affects its development.1 Assessment of VI in children should also account significant nonclinical aspects such as the socioeconomic status of the family, psychological and educational support system, and social interaction with family members and to other people.

To our knowledge, this is the first local study that will compare the QoL of children with and without VI. It will enable us to identify different factors that can affect the QoL of visually-impaired children and relate its impact to their family and society. Determining the different aspects of childhood VI is vital in developing pediatric vision screening and rehabilitation programs, functional assessment and monitoring of pediatric ophthalmology patients, and counseling of the families with children suffering from this condition.

This was a cross-sectional study involving 138 parents or caregivers of children 3-7 years of age recruited from the Pediatric Ophthalmology and General Ophthalmology Clinic of a tertiary government hospital. Children in the VI group (n=69) had a best-corrected visual acuity of <20/40 in one eye while children in the control group (n=69) had best-corrected visual acuity of 20/40-20/20 in both eyes (normal visual acuity).8 The parents or primary caregivers were 18 years old and above, and able to read, write, and speak in conversational Filipino.
Participants were included in the study if they were parents or primary caregivers of children who were regular patients of the Pediatric Ophthalmology and General Clinic for at least 1 year and with at least 4 follow-up visits. Parents/caregivers of children with neurological and psychological abnormalities and unable to read, write, and converse in conversational Filipino were excluded from the study.

Assessment of Other Variables

All qualified children underwent complete ophthalmologic examination, including determination of the visual acuity using either the Snellen or LEA chart. The participants were interviewed for their basic demographic information. A medical chart review was done to obtain information regarding the patients’ clinical diagnosis.

Demographic and clinical data were reported through descriptive statistics using quantitative variables (mean, standard deviation) and qualitative variables (frequency, percentage). Student’s T-test was used to compare normally distributed continuous variables between two groups; while Chi-square test was used to compare categorical variables. A T-test was used to compare the total index score and subscale scores between children in the VI group and the control group. The multiple regression model basedon the total index QoL score of children with VI was used to assess the effect of other factors (patient’s age, sex and visual acuity, and parental age, sex and educational attainment). Hypothesis testing was done with a 95% level of significance and power of 90%.

One hundred thirty-eight (138) children were included in the study. There were 24 males (17.4%) and 114 females (82.6%). Mean age [standard deviation] was 5.44 [1.37] years old. There were 69 children in the VI group and 69 in the control group. The mean LogMAR best-corrected visual acuity [standard deviation] was 0.50 [0.23] for children with VI and 0.10 [0.14] for the children in the control group. Comparing the groups with and without VI, there were no significant differences in patient’s age and sex, parental age, educational attainment and gender distribution (Table 1). Table 2 summarizes the ophthalmologic diagnoses of children with VI recruited in this study. Majority of them was diagnosed with congenital cataract (18.84%) and refractive accommodative esotropia (18.84%).

Table 1. Demographic and clinical characteristics of children with visual impairment and control group. 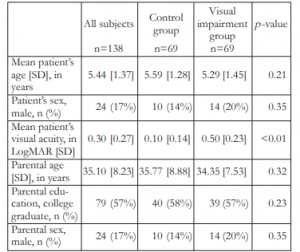 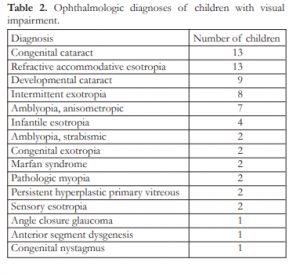 Table 3. T-test comparing the quality of life scores of children with visual impairment and control group.

This study compared the QoL scores of visuallyimpaired children aged 3-7 years with a control group. Results showed that children with VI had significantly lower total index QoL score, general vision, competence, and personality subscale scores than the control group. No significant difference was found in the QoL scores for the general health, family impact, and treatment subscales.

The findings of the current study were consistent with the results of the validity and reliability assessment of the CVFQ done by Birch et al.8 In their study, children with severe VI had significantly lower scores in the competence and personality subscales. It was supported by the findings of Tailor et al. in their QoL survey involving visually-impaired children treated for cataracts. They reported significantly lower psychosocial subscores than physical health subscores using the Pediatric Quality of Life Inventory (PedsQL).9

The present study showed that refractive accommodative esotropia, intermittent exotropia, and infantile esotropia are the common causes of childhood VI. In various studies, strabismus was found to have an important role in selection of partner by adult individuals and in selection of playmate by children.10,11 Wen et al. concluded that strabismus negatively affects the QoL of children particularly in their interpersonal skills and school functioning. They suggested that the cosmetically visible misalignment of the eyes is the most important factor causing this negative association.12 It has also been reported that strabismus surgery can significantly improve patient’s personality as evaluated by the WHO quality of life measure.13

A significant proportion of visually-impaired children involved in this study had childhood cataracts. Lopes et al. assessed the QoL of children with bilateral congenital cataract using the CVFQ. They reported that bilatermotor-visual integration.16 Moreover, problems in stereopsis experienced by visually-impaired children treated for childhood cataracts negatively affect their competence in doing daily activities.

Scores in the general health subscale failed to show significant difference between the 2 groups in the present study. This is similar to the findings of the British Congenital Cataract Study which reported that the physical health of patients treated for congenital cataract was less affected by the ophthalmologic condition compared to psychosocial aspect.17 No difference in the parental perception on general health is attributable to the fact that the respondents did not observe significant change in the physical health of their children, other than the eye problem.

Poorer best-corrected visual acuity was associated with lower quality of life in children with VI as suggested by the multiple regression model. The total index QoL scores of children with VI were not affected by the patient’s age and sex, and parental age, sex and educational attainment. These findings were also consistent to the reported results of the validity and reliability assessment of the CVFQ done by Birch et al.8

In conclusion, VI has a negative effect on the quality of life of Filipino children aged 3-7 years specifically in their visual health, personality, and competence, as shown by the use of the CVFQ3plus. We have demonstrated the feasibility and usefulness of evaluating the QoL of visually-impaired children using parental or caregiver response. In pediatrics, disagreement between the perception of children and their parents with respect to the impact of an illness on the quality of life is well-recognized. Comparative study using QoL assessment questionnaires completed by visually-impaired children themselves is recommended. Also, the complexity of visual development in children warrants further studies that al congenital cataracts were associated with significantly lower QoL scores, specifically in  the competence subscale.14 As part of the Infant Aphakia Treatment study, Hartmann et al., evaluated the stereopsis of infants treated for cataracts at age 4.5 years. They have found out that only 28 (25%) out of 114 patients had positive stereopsis. They also concluded that the presence of visual acuity better than or equal to 20/40 was vital in the development of stereopsis in children.15 VI associated with problems in stereopsis can cause poor performance on activities involving hand-eye coordination and will evaluate the effect of other clinical factors such as contrast sensitivity, reading speed, and visual fields to childhood VI.