Traumatic corneal penetrating injuries are considered ophthalmologic emergencies that may lead to several complications resulting to loss of vision. This includes endophthalmitis, severe anatomic distortion of the anterior segment, retinal detachment, phthisis bulbi, etc. These injuries must be managed immediately in order to preserve the integrity of the cornea and prevent complications.1,2

Sutures are considered the gold standard in repairing corneal wounds. It has several disadvantages like corneal tissue distortion, induced irregular astigmatism, suture track scar formation, suture infiltrates, suture-related abscess and neovascularization, and giant papillary conjunctivitis.3 Non-absorbable sutures, like nylon, also have to be removed after wound healing. Large corneal perforations may sometimes require penetrating keratoplasty as definitive treatment. Other options for immediate closure of corneal penetrating injuries include conjunctival flaps, tissue adhesives like cyanoacrylate glue or biological fibrin glue, and amniotic membrane graft.2 Small incision lenticule extraction (SMILE) is a refractive surgical procedure involving the use of femtosecond laser in creating an intrastromal corneal lenticule. Corneal lenticules, which are often discarded at the end of SMILE, have been implanted as an allogenic graft to treat conditions such as aphakia, hypermetropia, keratoconus, and presbyopia.4

When used for these indications, the corneal lenticule’s integrity must be preserved by cryopreservation.4 Cryopreservation shows good cellular viability and collagen architecture despite decrease in collagen fibril density.5 Recent studies have explored the application of SMILE-derived corneal lenticule as patch graft for corneal penetrating injuries. A prospective study involving 6 adult patients with corneal perforation sealed using corneal lenticules and 4 simple interrupted nylon 10-0 sutures showed incorporation of corneal lenticule into the host stroma without any signs of infection.1 A single-center case series involving 7 patients with microperforations and complicated corneal tears were also sealed using corneal lenticule  with human fibrin glue. Results showed all lenticule grafts were well-apposed and clear until the last follow-up visit.

Due to lack of available data regarding the strength of corneal lenticule from SMILE with human derived fibrin glue for sealing corneal wounds, this study aimed to determine its effectiveness in sealing induced corneal penetrating wounds in porcine eyes.

This was an in vitro comparative experimental study using cadaveric porcine eyes. Approvals from the institutional scientific review committee, institutional animal care and use committee, and institutional ethics review committee were obtained. Eyes with any signs of corneal pathologies that preclude visualization of the anterior segment, including corneal opacities, scars, or evidence of previous trauma or infection, were excluded from the study. Twenty (20) porcine eyes were included in this study and were randomized (1:1) into control and treatment groups.

Discarded fresh corneal lenticules from patients who underwent SMILE procedure were immediately collected. Informed consent form was obtained from the lenticule donors. Extracted lenticules were placed in a vial containing Optisol-GS® (Bausch & Lomb, CA, USA) and were stored in a dedicated, controlled and monitored refrigerator at a temperature of 4° Celsius for a maximum of 4 months.

Fibrin glue components (fibrinogen concentrate and thrombin) were obtained from a single whole blood donor and were prepared in the Research and Biotechnology Division Laboratory following the technique as proposed by Hirsch et al.6

On the day of the experiment, each corneal lenticule was transferred into a petri dish and rinsed twice with balanced saline solution (BSS).4

A face wax with globe holder was used to secure each porcine eye. Baseline intraocular pressure (IOP) was measured using Tonopen® (Reichert Technologies, USA). Using a standard 15-degree metal keratome (Alcon Laboratories, USA), a side port incision was created along the peripheral cornea. A gauge 21 anterior chamber maintainer connected to the Centurion® Vision System (Alcon Laboratories, USA) was inserted through the side port with the infusion turned off.

A 3-mm metal keratome (Slit Blade, Appasamy Ophthalmic Surgical Blades, India) was used to create a straight full-thickness incision with the keratome angled perpendicularly to the central surface of the cornea. Wound leakage at the incision site was confirmed by Seidel’s test. Sterile fluorescein strip (BioGlo®, HUB Pharmaceuticals, USA) was used to document the presence or absence of egress of fluid. Presence of egress was recorded as positive Seidel’s test.

Induced corneal incisions in the experimental group were sealed using human corneal lenticule with single blood donor fibrin glue as corneal patch. Fibrinogen and thrombin components were placed in designated 1 cc syringes with small gauge cannulas for subsequent controlled application. Prior to application of the fibrinogen and thrombin components, the cornea was de-epithelialized by superficial keratectomy using blade 15 and was dried with a cellulose sponge. The fibrinogen and thrombin solutions were sequentially placed over the central corneal incision in equal amounts, approximately 0.1 mL each. The lenticule was then placed over the fibrin glue. The patch graft was allowed to set for 3 minutes. Seidel’s test was done to check for leak. If Seidel’s test is negative, infusion of the Centurion® Vision System was turned on with minimum IOP set at 30 mmHg (Figure 1). IOP was then raised by increments of 5 mmHg, until leakage was appreciated. IOP at which leakage occurred was recorded as the leakage  pressure. i

The results were tabulated and statistically analyzed using SPSS software. The mean baseline IOPs, as well as the leakage pressures between both groups were analyzed using the Mann-Whitney test for 2 independent variables where a p-value of less than 0.05 was considered significant (95% confidence interval). Data for the presence of leakage after immediate sealing using either methods was analyzed using Fisher’s exact test. 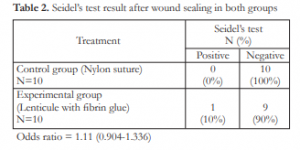 Both control and experimental groups had comparable baseline IOP measurements. All porcine eyes in the control group were negative for leakage after sealing the corneal wounds with sutures. One (1) out of 10 porcine eyes in the experimental groupshowed positive Seidel’s test after  application of lenticule and fibrin glue. Statistical analysis showed odds ratio of 1.11 (0.93-1.36). This means that both methods have comparable efficacy in sealing wounds at IOPs below baseline values. It is of note that at this point, the eyes are shallow and hypotonic, as this may contribute to the effectivity of sealing corneal wounds using both methods.

There is a significant difference in the mean leakage pressure in both groups. The significantly higher mean leakage pressure in the control group implies that the sealing capability of both groups are not comparable under IOP equal to or greater than 30 mmHg. In the experimental group, all corneal patches showed focal areas of leakage as soon as the infusion was turned on at a minimum IOP of 30 mmHg. Results from a local study done by Macasaet et al. in 2015 showed mean leakage pressure of 32.30 mmHg.7 Although the same protocol was followed for fibrin glue preparation, changes in its tensile strength may be attributed to different amounts of fibrinogen or thrombin derivatives extracted from the whole blood, or technique and instrumentation of its preparation.9

This is an in vitro experimental study using cadaveric porcine eyes. Hence, the results of this preliminary study may only be comparable to human subjects when proposed treatment will be  used in human eyes. It is also recommended to use a manometer that may be capable of maintaining adequately formed anterior chamber and more physiologic IOP while checking for leaks right after sealing the wounds. A manometer may also accurately determine the leakage pressure at lower or more physiologic IOPs. Commercially prepared glue such as Fibrin Sealant® or cyanoacrylate glue may be used together with the corneal lenticule to seal induced corneal penetrating injuries at IOP equal to or greater than 30 mmHg. Although commercially prepared fibrin glue may carry a risk of transmitting infectious agents when used in human subjects as compared to autologous fibrin glue, they are produced from pools of plasma which contain high levels of fibrinogen therefore producing firmer coagulums that may withstand higher leakage pressures. Cyanoacrylate glue, which usually has a higher tensile strength compared to fibrin glue, may also be used together with the lenticule. A solid mass, however, may form after its application and may cause inflammatory reactions such as corneal neovascularization and giant papillary conjunctivitis.8 Applying the lenticule first, then the fibrin glue over it may also be an option for  future studies.