The presence of iridotrabecular contact (ITC) is a hallmark of eyes with angle closure glaucoma.1 During the early phase of the disease, the eye may be caught as a primary angle closure suspect (PACS) wherein only appositional closure is present in the absence of peripheral anterior synechiae, elevated intraocular pressure, or optic neuropathy.2 Screening for PACS is important to identify eyes at risk for angle closure attacks following physiologic or pharmacologic pupillary dilation.3 Furthermore, detection of ITC is vital in deciding when a laser iridotomy should be done to prevent blindness. Indentation darkroom gonioscopy is the gold standard to detect appositional closure.4 However, findings are subject to interobserver variability. Additionally, slit lamp illumination and ambient lighting during gonioscopy may induce pupillary constriction which would make a narrow angle appear open and consequently, ITC may be missed.1

The Visante® time-domain anterior segment optical coherence tomography (AS-OCT) (Carl Zeiss Meditec, Dublin, CA) is a non-invasive and noncontact method of evaluating the anterior segment.5 It creates cross-sectional images of the eye detailing the spatial relationships of the structures comprising the anterior chamber angle.6 With the use of a 1310 nm super-luminescent diode as a light source, it allows for the evaluation of angle configuration in both room lights-on and lights-off conditions.5 As such, the Visante® AS-OCT is a useful adjunct to dark-room gonioscopy for early detection of ITC in eyes at risk for angle closure.

With the Visante® AS OCT, anatomic risk factors for angle closure attacks such as shallow anterior chamber and increased iris volume can be identified and measured.7 Other angle parameters that may indicate the need for laser iridotomy include angle opening distance (AOD) and trabecular-iris space area (TISA).8

The proportion of patients who develop ITC in lights-off conditions has not been studied before. This novel study aims to add value to the AS-OCT as an objective diagnostic tool to improve detection of patients at risk for angle closure and glaucoma blindness.

The medical records of 79 patients who were treated at the Asian Eye Institute (AEI) were reviewed retrospectively. This study was approved by the St. Cabrini Medical Center – AEI Ethics Review Committee and followed the tenets of the Declaration of Helsinki.

We reviewed eyes classified as PACS through gonioscopy by one glaucoma fellowship-trained examiner (EUL) from 2015 to 2018. Each eye underwent anterior segment imaging with the Visante® AS-OCT (Carl Zeiss Meditec, Dublin, CA). PACS was diagnosed when the pigmented trabecular meshwork was not visible in 180˚ of angle circumference and in the absence of elevated intraocular pressure, peripheral anterior synechiae, and glaucomatous optic disc changes.2,9 Eyes with other forms of glaucoma and with previous laser treatment or intraocular surgery such as lens extraction or glaucoma surgery were excluded. An initial scan was done with the room lights on followed by a second scan obtained after turning the room lights off for two minutes. The scans were conducted inside a dedicated room for the Visante® machine by experienced ophthalmic technicians trained to do OCT. All scans included in the study met the minimum reliability criteria based on center standards.

ITC was noted when there was contact between the iris and the structures anterior to the SS.1,10 The ACD is the distance from the apex of the posterior corneal surface to the apex of the anterior surface of the lens capsule (Figure 1).9 The SS is marked by the inward protrusion of the sclera along the inner surface of the angle wall.10 After determination of the SS location, the AOD-500 was measured as the perpendicular line 500 um anterior from the SS. The TISA-500 (best fit trapezoid bounded by the SS and the AOD-500) and SSA were also computed for each eye and lighting condition.11 The location of the SL was manually identified as the anterior termination point of the trabecular meshwork. The AOD-SL was then measured as the distance from the SL to the iris surface that is perpendicular from a line drawn from the SS to the SL (Figure 2).12 Measurements were done by a single observer (JPG). 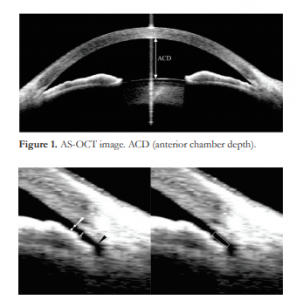 Following data collection, the angle metrics on lights-on and lights-off conditions were compared using paired t-tests. The presence of ITC was tested using the chi-square test. Logistic regression analysis was done to determine the relationship between presence of ITC to ACD or age. Statistical significance was set for p≤0.05. Statistical analyses were performed using Stata version 12 for Windows.

A total of 144 eyes from 79 patients diagnosed with PACS were included in this study. Seventy (70) of the subjects were females and 9 were males. The mean age was 60.4 years (range 30 to 88). Fourteen (14) eyes were excluded from the analysis due to a diagnosis other than PACS or inadequate visualization of the SS and SL. Eyes in which SS or SL could not be detected was due to either a suboptimal scan quality or an atypical contour of the corneoscleral wall. 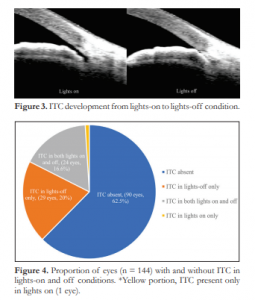 The mean ACD was 2.23 mm. Half of the eyes with ITC (52.2%) occurred when the ACD was shallower than 2.18 mm. Logistic regression showed that for every millimeter of ACD increase, there is a 91% decrease in the odds of having ITC in lightsoff condition. Age was not found to be related to the occurrence of ITC in the lights-off condition. 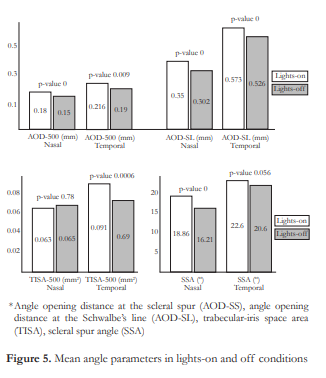 Figure 5. Mean angle parameters in lights-on and off conditions

Angle closure glaucoma (ACG) is an aggressive disease that can cause irreversible blindness. ITC is a fundamental characteristic of eyes with ACG.1 Recognition of ITC when it is still appositional is paramount to prevent the debilitating consequences of ACG. If left undetected, synechial angle closure may develop and cause optic neuropathy and its corresponding visual field defects. Population studies estimate that eyes with PACS will develop synechial closure at a rate of 22-35% within 5 to 10 years.13,14

As an adjunct to gonioscopy, imaging modalities to detect ITC include ultrasound biomicroscopy (UBM) and AS-OCT. In eyes with Shaffer grade 2 or less, UBM can increase the probability of observing appositional ITC by more than 70%.1 However, commercially-available UBM machines entail a tedious procedure and require proficient technicians. In contrast, the Visante® AS-OCT is a non-contact device which captures images quickly with minimal technician effort making it a more suitable adjunct to gonioscopy.5

With the Visante® AS-OCT, the presence of ITC can be observed in both lights-on and off conditions. The physiologic response of these eyes to low-light levels can reveal which eyes are prone to angle closure attacks.9 Our literature search did not yield other studies which investigated ITC detection in low-light
conditions. In this study, 24 eyes (16.6%) primarily had ITC in the lights-on condition. By turning the room lights off, an additional 29 eyes (20%) developed ITC. This illustrates the value of imaging PACS eyes with the room lights on and off to increase ITC detection.

Previous studies have identified the risk of angle closure with a shallow ACD and aging. In this study, the odds of having ITC is greatly decreased in eyes with a deeper ACD. Half of the eyes with ITC in the lights-off condition occurred when the ACD was shallower than 2.18 mm. This value is comparable to other reports showing that predisposition to angle closure occurred when the ACD was less than 2.12 mm with the Visante® AS-OCT. In comparison, eyes with open angles had ACD values of greater than 2.75 mm.9,15 Aging is associated with a gradual ACD reduction and is thought to be due to incremental changes in iris curvature and thickness leading to angle closure.9 However, our study did not find an association between ITC occurrence and age.

Our study also investigated the other ACA metrics. Identification of SS is key in the accurate measurement of ACA parameters. Only the horizontal scans were included in this study as this meridian had the highest rates of SS identification.10 Furthermore, vertical ACA scans may be confounded by eyelid manipulation.

In previous studies, the SS can be identified and validated by multiple observers in 70-78.9% of cases using the Visante® TD-OCT and the Cirrus® OCT.10,16 In contrast, our study detected the SS in a larger proportion of study eyes (92.3%, 133 eyes). Using the SS as an anatomical landmark, the AOD500 and TISA-500 can be determined to estimate the filtration area.17 Our study found a reduction in both parameters in the light-off condition. Similarly, these two measurements have been demonstrated by various investigators to decrease with physiologic dilation in the lights-off condition.9,11,17

A suboptimal scan quality or atypical corneoscleral contour may lead to non-identification of the SS. As an alternative to SS, the AOD at the SL can be used to assess the filtration area. The AOD-SL has the advantage of being identified in most eyes even when the SS cannot be seen. Qin and Cheung found the AOD-SL to be less than 0.290 mm in occludable eyes.12,18 In contrast, our study had a mean AOD-SL of 0.414 mm. This discrepancy may be due to the resolution differences of the machines used (Fourier vs. time-domain) and varying eye characteristics of the population groups (Caucasians and Singaporeans vs. Filipinos).

The mechanism of ITC development and reduction of ACA measurements in low-light conditions observed in our study have been postulated to be a result of unchanged iris volume after physiologic or pharmacologic dilation. This results to a crowding of iris tissue peripherally leading to angle closure. Normal eyes tend to lose nearly half of its iris volume as extracellular fluid is pumped out during mydriasis.3,19

Our study has limitations. First, the correlation between low-light exposure time and ITC development is unknown. To fill this gap in knowledge, eyes with PACS need to be exposed to varying durations of low-light conditions in a prospective and controlled study. Second, lighting conditions may have not been standardized in all tests. We recommend using a light meter to ensure uniform illumination intensity during all image acquisitions. Third, the Visante® ASOCT captures images from a single meridian which may not be representative of the iris behavior in the rest of the angles. Caution should be observed in interpreting the data as there might be a tendency to over diagnose ITC. It is recommended that future studies utilize either the spectral-domain or the swept source OCT to assess ITC. Both technologies have higher resolution which may increase identification of the SS. The swept-source OCT can also provide the extent of angle closure across 360˚ circumference expressed as the ITC index.20,21 However, access to these OCT machines is currently limited. The Visante® AS-OCT remains as a more viable option for clinic and research use due to its widespread availability. Lastly, angle measurements were done manually by a single investigator which may be subject to observation bias. Masking of the images whether they were from the lights-on or off condition could increase measurement objectivity.

The presence of ITC is a recognized characteristic of eyes with angle closure. Our study showed that as much as 20% of cases may be missed if imaging in the low-light conditions is not done. This highlights the need to image the eye in both room lights-on and off conditions to visualize the accurate anterior segment morphology. Future studies using automated analysis with more modern OCT technologies can be done to assess the risk of angle closure.