Disclosure: The authors report no conflicts of interest or financial disclosures.

DMD has been reported to occur as a rare complication of glaucoma surgery. We reported a case of DMD following removal of an intraluminal stent of a Baerveldt aqueous shunt in a post-corneal transplant eye, and the corresponding surgical interventions done to save the corneal graft.

Our patient was a 65-year-old male with a long history of surgeries in his right eye. That eye developed pseudophakic bullous keratopathy after undergoing phacoemulsification with posterior chamber intraocular lens implantation in 2002, and subsequently received two penetrating keratoplasty procedures (2003 and 2009). After the second corneal transplant, secondary angle closure glaucoma developed necessitating implantation of a glaucoma drainage device (Baerveldt® BG101-350, Abbott Medical Optics, Inc, Santa Ana, CA, USA) in 2010. An intraluminal stent/ ripcord (Supramid® 3.0, B. Braun Medical, Melsungen, Germany) was inserted in the tube of the Baerveldt shunt to reduce the incidence of post-operative hypotony.

In the interim following the Baerveldt shunt implantation, the patient had regular follow-ups in our institution. His right eye had a best-corrected visual acuity (BCVA) of 20/40 and maintained acceptable intraocular pressures (IOPs).

In September of 2017, the right eye developed IOPs of 50 mmHg and received maximum topical and systemic anti-glaucoma medications for 3 weeks without achieving adequate IOP control. The decision to remove the ripcord was made to allow increased aqueous flow along the Baerveldt tube. During the procedure, there were several episodes of anterior chamber collapse, prompting repeated reformation with fluids through a temporal side port.

On the first day after ripcord removal, BCVA of the right eye was 20/125. That eye was hypotonic with severe corneal edema over the entire graft. The anterior chamber was formed with hyphema of <1mm. There were no leaks along the graft-host interface nor the conjunctival closures over the Baerveldt shunt. The posterior pole was not visualized; ocular ultrasound, however, showed no choroidal detachment. The corneal edema was attributed to hypotony and topical hypertonic saline was started.

On the third day post-ripcord removal, there was slight decrease in the corneal edema and IOP was 5 mmHg. The vision did not improve and a large DMD at the corneal graft was seen on slit-lamp examination (Figure 1). 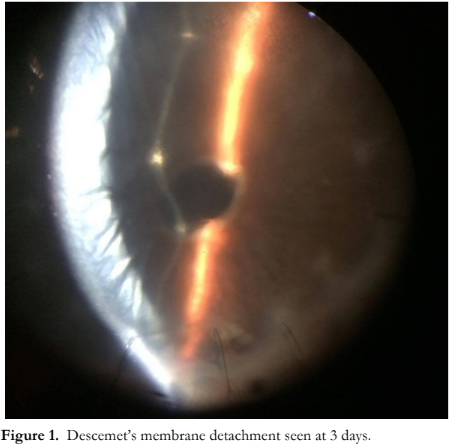 To address the hypotony and DMD, a ripcord using Supramid® 3.0 was reinserted into the tube of the Baerveldt shunt, and viscoelastic gel (Viscoat®, Alcon Laboratories) was injected into the anterior chamber to reattach and tamponade the DMD. There was an immediate clearing of the corneal edema (Figure 2) and subjective improvement in vision a few hours after the procedure. The eye was maintained on prednisolone acetate and moxifloxacin eye drops.

The next day, the eye developed severe corneal edema with bullae (Figure 3) but with no distinct DMD seen. BCVA further decreased to counting fingers and IOP was 8 mmHg. Hypertonic saline eye drops were added. On the third day post-viscoelastic tamponade, the corneal edema and vision remained the same, but IOP was increased to 20 mmHg, prompting addition of a topical aqueous suppressant (Combigan® 2x/day). These medications were maintained for the following weeks. 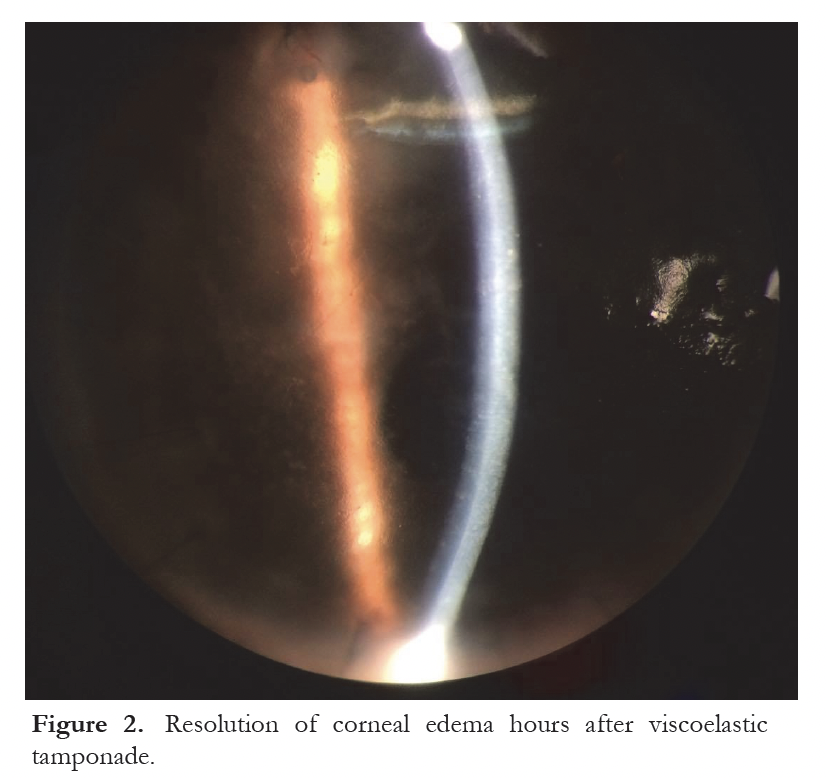 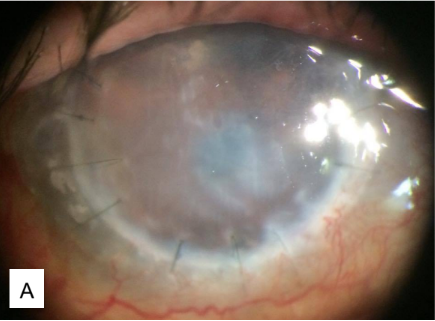 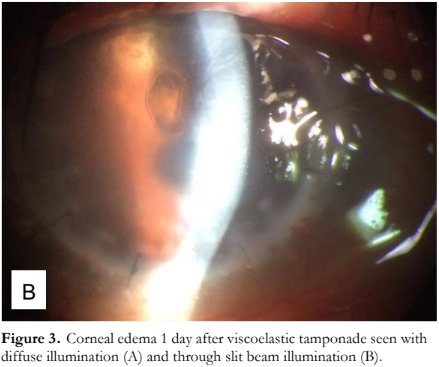 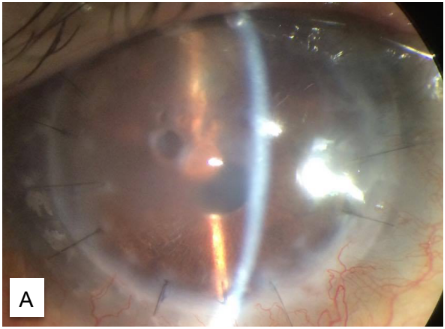 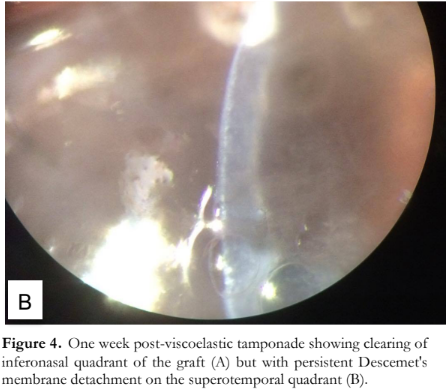 On confirmation of the persistent DMD, 0.1 ml of 14% perfluoropropane/C3F8, an expansile gas, was injected into the anterior chamber. The patient was advised to be in a supine position and continued the same medications.

On the second day post-gas injection, vision improved to 20/200 and IOP was 11 mmHg. The graft was clear centrally, with mild edema at the superotemporal periphery. The anterior chamber was 20% filled with gas (Figure 5). The hypertonic saline was decreased in frequency while all other medications were maintained. 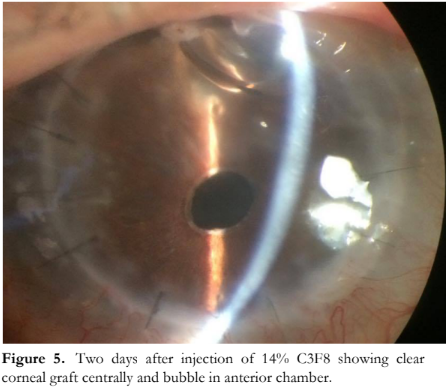 At one week post-gas injection, the BCVA of the right eye was 20/40, the graft was clear with attached Descemet’s membrane and no gas bubble visible (Figure 6). The IOP remained at 11 mmHg. The hypertonic saline was discontinued and all other medications tapered. 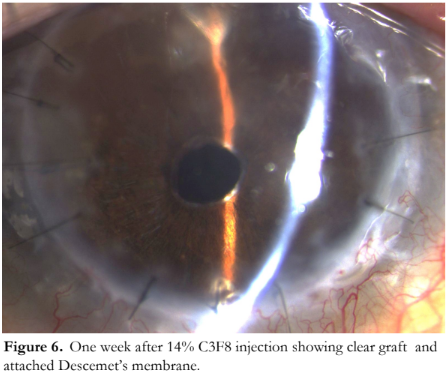 Several series in the literature documented DMD following glaucoma surgeries, such as trabeculectomy1-3 and glaucoma drainage device implantation.4 In these reports, the mechanism behind the development of a DMD were thought to be inadvertent dissection of the Descemet’s membrane-endothelium tissue complex from the stroma during creation of a paracentesis port, passing of a cannula and injection of fluid or viscoelastic in the port, or a combination of both.

Our case presented a unique situation wherein the patient has a full-thickness corneal graft of 7 years and developed a DMD during removal of the intraluminal stent. The hypothesized mechanism for DMD in this case was the dissection that happened during the repeated episodes of anterior chamber collapse and reformation with fluid, complicated by the presence of a corneal graft with an inherent discontinuation between the donor and recipient DM. This discontinuity was a weak area in the posterior surface of the cornea and a starting point for detachment.

Several methods have been proposed to repair post-surgical DMD, including medical management5, intracameral injection of expansive gases such as C3F85,6 or sulfur hexafluoride (SF6)7, viscoelastic tamponade, or transcorneal suture fixation.1,8 While all methods have been shown to be effective, most authors agreed that intracameral gas injection is easy and safe to perform and, thus, has become the well-accepted procedure for DMD repair.9 Success rates for gas injection in DMD from post-cataract surgery have been reported to be as high as 90-95%.9

Our initial reservation for injecting an expansive gas in this case was that compared to post-cataract surgery alone, our patient had a glaucoma drainage device and the anterior chamber was, therefore, not a closed system. We feared that the intracameral gas would not stay for a sufficient amount of time in the anterior chamber due to early diffusion into the aqueous shunt, so we decided to use a viscoelastic tamponade that might last longer due to its viscosity. As demonstrated in this case, the viscoelastic tamponade was not successful, including the conservative medical management for three weeks.

Gas injection in an eye with a Baerveldt aqueous shunt was previously reported by Wimmersberger et al. in 2013. In their case report, DM attachment was successful but was also accompanied by an increase in IOP, leading to immediate aspiration of the retained gas in the anterior chamber.4 In our case, there was no IOP increase even after all of the gas had spontaneously resorbed.

In conclusion, we reported a case of DMD in an eye with a full-thickness corneal graft that was successfully repaired by intracameral injection of 14% C3F8. Despite presence of a functioning Baerveldt aqueous shunt, the gas remained in the anterior chamber for a sufficient amount of time. The gas allowed reattachment of the DM to the corneal graft with no episodes of increased IOP. This allowed the resolution of the corneal edema secondary to the DMD and the return of good vision in the affected eye.