A Case of Neovascular Glaucoma Secondary to Ocular Ischemia

Disclosure: The authors report no financial interests or support.

An ischemic retina is the primary culprit behind the development of neovascular glaucoma (NVG). Three disease entities commonly cause NVG namely diabetic retinopathy (DR), central retinal vein occlusion (CRVO), and ocular ischemic syndrome (OIS). Rarely, NVG can also occur after lens surgery where the posterior capsule has been violated allowing angiogenic factors from an ischemic retina to escape into the anterior chamber.1,2

Even with an ischemic retina, an intact posterior capsule after lens surgery is thought to be protective for NVG. In traditional ocular surgeries such as intra/extracapsular cataract extraction where posterior capsulotomy was done or in complicated surgeries which violated the posterior capsule, angiogenic factors arising from retinal ischemia may escape to the anterior chamber and encourage neovascularization.2

Our case follows the development of NVG after an uncomplicated cataract surgery. This chronicle details the risk factors which may have predisposed the patient and discusses the contradictory findings of Doppler and MRA.

A 74-year-old male with controlled hypertension and diabetes mellitus (>10 years), a history of cardiac surgery, and on anti-coagulants consulted our institute for blurred vision. His electrocardiogram only showed non-specific T-wave changes. He had a slightly elevated HBA1c (7.10) and an average blood pressure of 140/70 mmHg. The right eye had a best corrected visual acuity (BCVA) of 20/25 and an IOP of 16 mmHg. His left eye had a BCVA of 20/30 with a nuclear sclerosis grade 4 cataract and an IOP of 15 mmHg. The angles were open, iris neovascularization was not observed, the optic nerve was nonglaucomatous, and the retina did not exhibit signs of diabetic retinopathy. A macular scan of the left eye showed a normal foveal contour and thickness. Cataract surgery was suggested for which he was able to procure a cardiopulmonary clearance. He underwent an uncomplicated phacoemulsification of the left eye with a postoperative VA of 20/20 and normal IOP.

Two months after cataract surgery, he reported blurring of vision and ocular discomfort on the left eye which persisted for a week before seeking consult (Figure 1). VA was hand movement and IOP was 50 mmHg. There was severe corneal edema and the pupil was fixed and mid-dilated. Anterior chamber angles did not seem shallow by Van Herick technique. An initial dose of IOP-lowering medications was administered which reduced corneal edema and allowed visualization of iris neovascularization (Figure 2) and pinpoint peripheral anterior synechiae (PAS) scattered throughout the anterior chamber angles (Figure 3). No anterior chamber reaction was appreciated. 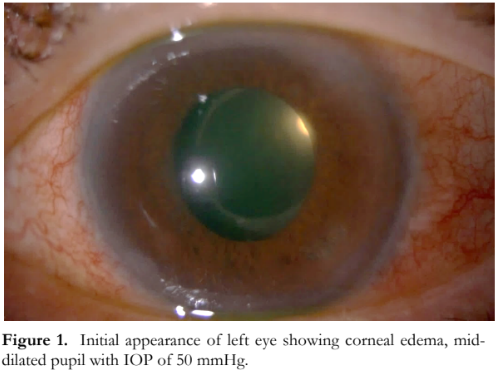 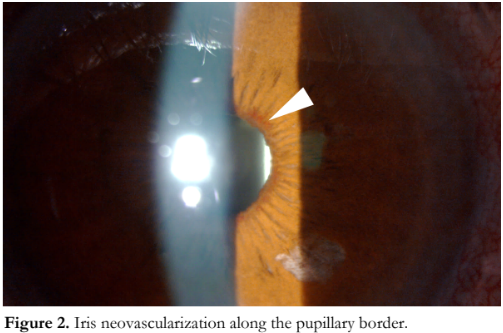 Fundus examination showed attenuated retinal arteries and dilated but not tortuous retinal veins. There were no dot-blot hemorrhages, cotton-wool spots, or microaneurysms. The optic disc had a cup-disc ratio of 0.5, rim pallor, and a flame-shaped hemorrhage over it (Figure 4). A fundus fluorescein angiogram revealed a delay in choroidal filling and prolonged arteriovenous time. A blocked hypofluorescence on the optic nerve was present corresponding to the disc hemorrhage seen in the color photo (Figure 5). 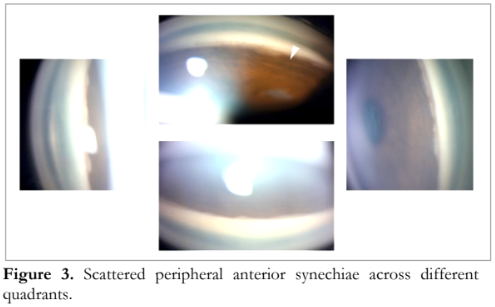 The patient was placed on anti-glaucoma medications. On follow-up, the VA improved slightly to counting fingers and IOP decreased to 20 mmHg. Intravitreal injection of aflibercept (Eylea, Tarrytown, NY, USA and Bayer, Basel, Switzerland) was done.

Two weeks later, iris and angle neovascularizations had visibly regressed. IOP was 12 mmHg with one anti-glaucoma medication. However, VA remained unchanged and PAS were still present. The patient was referred back to his cardiologist for work-up.

Carotid doppler scan showed the presence of homogenous intraluminal plaques with 70% stenosis in the left and 54% stenosis in the carotid bulbs (Figure 6). After a month, the patient underwent MRA. Both internal carotid arteries (ICA) were shown to have normal caliber without any evidence of significant stenosis, aneurysm, or arterio-venous malformation. The middle carotid arteries arising from the ICA formed normal insular loops. 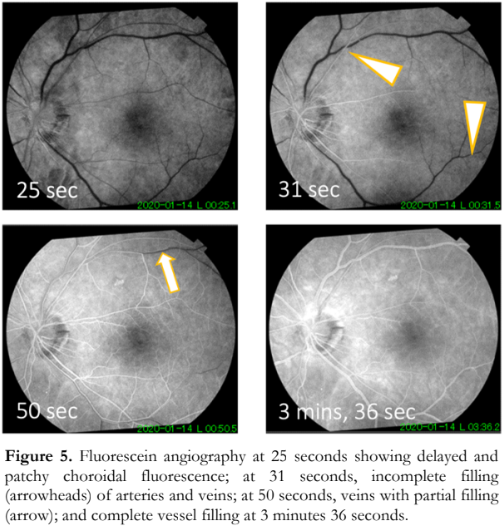 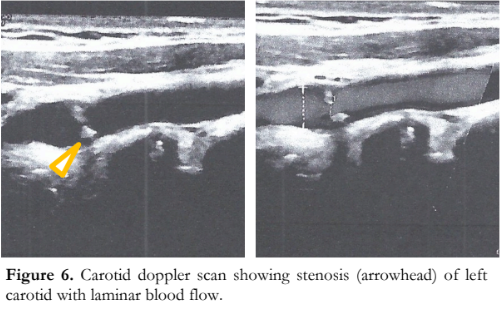 At his last follow-up 5 months after cataract surgery, VA improved to counting fingers. IOP was maintained at 12 mmHg with one anti-glaucoma medication. Several clock-hours of the anterior chamber angles remained open with the presence of pinpoint PAS. There were no new abnormal iris vessels. The patient has since migrated abroad where he is continuously receiving medical care.

The manifestation of carotid artery disease in the eye may not be immediately evident. Symptoms of OIS are often unspecific and may be confused with age-related changes (such as cataract, macular degeneration) especially in the elderly with multiple vascular risk factors. In some cases, iris neovascularization leading to increased IOP may be the sole finding.3 In order to give a diagnosis of OIS, other diseases with similar symptomatology must be ruled out. Specific eye findings and test results can help in its confirmation.

In our patient, the retina only had minimal changes. However, fluorescein angiogram showed a pattern expected if there is an obstruction at the carotid level. In these eyes, there is delayed and patchy choroidal filling as well as prolonged arteriovenous time which is distinct from the angiogram results of DR or CRVO. Choroidal circulatory disturbance is seen in other diseases such as giant cell arteritis, age-related macular degeneration, or central serous chorioretinopathy, all of which have distinct accompanying characteristics apart from OIS.4,5 An indocyanine green angiography (ICG) would have allowed better evaluation of choroidal hypoperfusion.3 Risk factors associated with OIS were also present in our patient such as male sex, advanced age, and presence of systemic diseases. Delaying medical consult for a week after onset of symptoms has been identified as a risk for the development of NVG.6 The presence of an ipsilateral carotid obstruction in the doppler scan also aligned with OIS. However, the absence of an arterial obstruction in the MRA refuted these findings thereby raising two diagnostic dilemmas. If it was not OIS, what triggered anterior segment neovascularization after an uneventful phacoemulsification? Can carotid stenosis leading to OIS be transient?

The risk of developing neovascularization after lens surgery may occur if the posterior capsule is violated, whether inadvertently or not. A retrospective study observed such a phenomenon in diabetic patients who underwent intracapsular cataract extraction and extracapsular cataract extraction with deliberate posterior capsulotomy. Without the posterior capsule acting as a barrier, it was theorized that angiogenic factors from an ischemic retina can escape into the anterior segment encouraging neovascularization.2 In contrast, an uncomplicated phacoemulsification with an intact posterior capsule, as in this case, may still lead to diffusion of intraocular cytokines and different degrees of inflammation which may accelerate progression of diabetic retinopathy but is not expected to cause NVG.7 A cohort study demonstrated that the DR of 32% of post-phacoemulsification eyes accelerated after 12 months. Of these, 41.7% worsened by three stages but none developed NVG.8

If this case was not caused by OIS nor by the other common causes of NVG (DR, CRVO), then other vasoocclusive phenomenon may be considered. Steroid-induced glaucoma is unlikely in this case as its use was tapered accordingly in the first postoperative month. With the absence of telltale retina findings of DR and CRVO, a central retinal arterial occlusion (CRAO) can be considered owing to a similar retina appearance. CRAO leading to NVG has been reported after phacoemulsification. This may occur due to the vasoconstrictive effect of anesthesia during surgery depleting ocular blood flow.9 Anesthetic volume may also have a mechanical effect leading to a transient IOP rise. An iatrogenic injury may occur if delivered through a peribulbar or retrobulbar route.9,10 Our patient was only given topical anesthesia and intravenous sedation. If CRAO did occur, his vision loss would have been immediate instead of two months postoperatively. Electroretinography can be ordered to distinguish between CRAO and OIS as its b-wave corresponds to the inner retinal layer. CRAO would only have a decreased b-wave amplitude whereas OIS has ischemia of both outer and inner retinal layers and is thus expected to have decreased a and b-wave amplitudes.3 The presence of disc hemorrhage in the affected eye may also be indicative of the ischemic changes caused by his co-morbidities. Hemodynamic abnormalities, vasospasm, and dysfunctional autoregulation of blood flow to the optic nerve have been correlated with disc hemorrhages.11

As such, OIS remains as our top consideration for the development of NVG in this patient. NVG has been documented to develop in eyes with OIS after a mean period of 12.6 ± 14.0 months.12 OIS occurs at a mean age of 65 years and is rare before 50. Men are twice more likely to be affected than women.3 Hypertension and diabetes are primary risk factors, both of which the patient has. Mortality rate can be as high as 40% in five years.13 Its hallmark is atherosclerosis from the blockade of the ipsilateral carotid artery. As the carotid supplies vital portions of the brain, more often than not, OIS is accompanied by cerebrovascular symptoms such as one-sided weakness. Patients who do not suffer infarction may have collateral circulation via the external carotid artery and the Circle of Willis.14 Our patient’s doppler result showed 70% stenosis which is said to be significant and can lead to embolism and hemodynamic disturbance.15 However, our patient did not exhibit cerebrovascular symptoms during the course of this disease. More so, a subsequent and more definitive MRA revealed the lack of carotid obstruction. This begs the consideration if such occlusions can be transient.

Spontaneous dissolution of carotid plaques has been observed previously in 17 to 67% of patients. The timing of carotid recanalization has been reported to occur between six hours to two weeks after the documentation of occlusion. Spontaneous clot lysis, vasospasm, and distal embolization of the occlusive clot have been proposed to explain this phenomenon. Extremely slow blood flow may also have been the culprit for an artifactual carotid occlusion in the initial scan.16 A similar case report documented that late recanalization can occur two months after onset of symptoms.13 We believe that the lesion seen in the doppler scan in our patient was not artifactual. Doppler ultrasound is said to have high accuracy in measuring carotid stenosis of >50%.17 It should be chosen as a first-line exam for patients suspected of carotid stenosis and has been observed to have a good agreement with MRA in a previous study (kappa = 0.8, p < 0.001).18 Autolysis of the clot may have taken place leading to an obstruction-free carotid artery in the MRA one month after the initial doppler scan. If ultrasound results are contradictory or inconclusive to MRA or CT angiography, digital subtraction arteriography may be ordered as a final arbiter.3

An uncomplicated phacoemulsification is expected to yield good outcomes if preoperative and intraoperative factors are considered carefully. However, even routine surgeries may develop unexpected postoperative results leading to devastating sequela. OIS is a condition that may occur without warning and, in this case, developed independently after lens surgery. Doppler imaging may be used for patients with high suspicion of carotid stenosis but its use as a screening tool for the general population is not generally recommended as significant stenosis is only present in less than 1%.19 Male patients with multiple co-morbidities should be more vigilant should symptoms arise and avoid delay in seeking consult. An immediate consult (<7 days) after the initial onset of symptoms may be the only controllable factor for the prevention of NVG in patients with OIS.6 Likewise, ophthalmologists must be keen in recognizing its symptoms when there is increased IOP and a drop in VA and escalate suspicion by identifying fine rubeosis during gonioscopy. The patient must be promptly referred to a multidisciplinary team for immediate treatment to prevent sight or life-threatening complications.