Disclosure: The authors have no conflicts of interest to disclose.

ICE syndrome is considered rare and typically presents unilaterally; however, bilateral cases have been reported.1,2,3,4 It usually affects women between 2nd to 4th decade of life, but cases have been reported in younger patients.1,3,5 Among the variants, CS was most common among whites, CR among Asians, and PIA among Indians.6

We reported a case of bilateral ICE syndrome with secondary glaucoma in a 12-year-old girl who presented with a one-year history of progressive, blurring of vision, associated with glare and occasional eye pain. The presence of multiple holes in her pupils bilaterally were previously seen and both eyes were worked up for glaucoma and treated with multiple anti-glaucoma medications. Persistence of symptoms prompted referral. There were no systemic abnormalities. Family medical history was positive for glaucoma.

Visual acuities were 20/400 improved to 20/70 in the right eye, and 5/400 improved to 20/100 in the left eye. Intraocular pressures (IOPs) ranged from 16 to 22 mmHg in both eyes on multiple anti-glaucoma medications. Whitish opacities were present in areas of the cornea with PAS, notably near the limbus. There were corectopia, polycoria, and multiple PAS with shallow anterior chambers in both eyes (Figure 1). There were no iris nevi and the lenses were clear. Gonioscopy showed closed angles corresponding to the areas of PAS. Fundoscopy revealed tigroid fundus, large peripapillary atrophy with advanced cupping of 0.9 and 1.0 in the right and left eyes respectively.

Standard G1 perimetry showed scotomas in the superior and inferior arcuates areas of the right eye and constricted (“tunnel”) central field in the left eye (Figure 2). 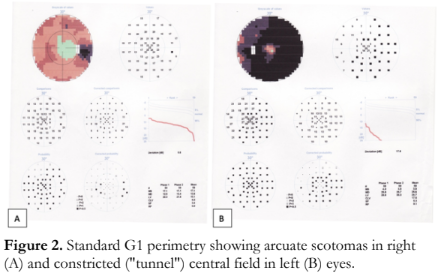 Patient was assessed to have PIA type of ICE with secondary glaucoma in both eyes. Despite maximum medical treatment, IOPs were uncontrolled necessitating implantation of GDD.

The left eye underwent Molteno valve implantation. Postoperative IOPs ranged from 4-10 mmHg, with a diffuse, midline, vascular bleb for the first week, that increased 2 weeks later to 16-19 mmHg necessitating addition of topical glaucoma medications. On the third week, with IOPs ranging from 17-24 mmHg, an encapsulated bleb was seen that underwent an emergent unroofing of the flap with resultant IOP decrease to 4-10 mmHg.

After a month, the right eye had Baerveldt valve implantation. Postoperative IOPs ranged from 6-10 mmHg that were maintained to 9-12 mmHg on succeeding months with no glaucoma medication.

ICE syndrome is a rare ocular disease encompassing a group of conditions exhibiting structural and proliferative abnormalities of the corneal endothelium, progressive obstruction of the iridocorneal angle, and iris abnormalities such as atrophy and hole formation.5

CS is characterized by decreased vision, corneal edema, epithelial bullae, hammered silver appearance of the corneal endothelium, normal IOP at presentation, and mild iris atrophy. Compared to the other variants, CS has less iris involvement; pupils may display corectopia and iris atrophy may be present that usually never leads to full-thickness holes.3

PIA is a slowly progressive condition starting with the formation of PAS. The iris changes, usually seen in the later course of the disease, include development of corectopia and ectropion uveae, marked iris atrophy leading to full-thickness hole formation. 3,5 PIA is considered in this case since both eyes exhibited pupillary distortion and multiple areas of iris atrophy and full thickness holes.

ICE syndrome typically presents unilaterally, but bilateral cases have been reported.1-4 Findings of the fellow eye ranged from the classic ICE findings to more subtle changes, such as transillumination defects, corneal endothelial polymorphism, and decreased outflow facility. These subtle changes may represent a forme fruste disorder reflecting an arrested or incomplete ICE or simply incidental findings. Regular thorough examination of both eyes of those with ICE may be needed to determine the true incidence of bilateral abnormalities.2

ICE syndrome patients usually consult an ophthalmologist for abnormal changes in the shape or position of the pupil. Others may report different degrees of blurring of vision ranging from early morning blurring due to the corneal decompensation at an early stage to blurred vision with haloes due to glaucoma.5 In this case, blurring of vision secondary to the glaucomatous changes and corectopia were reasons for seeking consult.

The reported prevalence of glaucoma in ICE syndrome ranged from 46-82%.3 IOP increase is mainly due to the angle obstruction caused by the migration of the abnormal endothelial cells and the development of PAS, and may lead to glaucoma. Glaucoma is worse in CR and PIA compared to CS due to the higher prevalence of ICE-cells proliferation over the iridocorneal angle and the development of PAS; thus, IOPs are more difficult to control in these types.3 More filtering surgeries were performed in CR (50%) and PIA (75%) compared to CS patients (40%).7

In early stages, IOPs are usually controlled with topical glaucoma medications to stop the progression. When inadequate, different surgical procedures can be utilized. Reported cases of those who underwent different surgical procedures showed higher survival rates with GDDs (71% at 1, 71% at 3, and 53% at 5 years) compared to trabeculectomy with antifibrotic agents (73% at 1, 44% at 3, and 29% at 5 years). It is postulated that trabeculectomies fail due to the continued growth of the endothelial membrane and proliferation of abnormal endothelial cells over the filtration site or contraction and synechial closure of the ostium.8 Some speculated that ICE syndrome may predispose to a more aggressive inflammatory response.9

The high failure rate of trabeculectomy may be partly related to the young age of ICE syndrome patients and to the progressive nature of the disease causing obstruction of filtration sites by synechiae and abnormal membranes. These were the considerations for implanting GDD as the initial surgical management in this case.

There are limited studies on the success rates of GDD in pediatric patients with ICE syndrome. Traditionally, GDDs are performed after failed trabeculectomies or for those at high risk of failure.8 Reported cases of pediatric glaucoma with GDD implantation have moderate long-term success ranging from 46-70% at 5 years.10 Factors, such as age, diagnosis, and GDD model, influence success rates. Frequent follow-ups are necessary due to complications that can occur in the early or late post-operative period. Additional surgeries, such as tube revision/trimming, repositioning, needling or removal of fibrous tissue for encapsulated blebs may be needed to control IOP. Others reported that 9- 50% require a second surgical intervention to control IOP or manage GDD-related complications.11 GDD implants are used in ICE syndrome because they bypass the risk of the regrowth of ICE membrane over the ostium for filtration and subconjunctival fibrosis over the filtration site.8 Success rates reported ranged from 70% at 1 year and 40% at 3 years; hence, they should be considered early in the management of glaucoma as they showed higher success rates than trabeculectomies, even if additional surgeries or adjustments may be necessary for adequate IOP control.12