Biologic adhesives, namely brin glue, have been used for various indications in the elds of dermatology, surgery, urology, neurosurgery and ophthalmology. It is mainly used for hemostasis and as a sealant for breaks and anastomoses. It has since been proven to be comparable with sutures, which have long been the gold standard, but with the added bene t of shorter operating time and ease of use.

Various studies have been done comparing brin adhesives to conventional sutures for numerous clinical indications. Some of these have investigated the ef cacy of tissue adhesives for sealing corneal wounds and perforations. A study by Bannitt et al, compared commercially prepared brin glue and cyanoacrylate tissue adhesive with sutures and found that both brin glue and cyanoacrylate can be a stable alternative to conventional sutures in the closure of clear corneal incisions. A randomized controlled trial by Sharma et al, concluded that commercially prepared brin glue and cyanoacrylate tissue adhesive were found to be both effective in the closure of corneal perforations up to 3 mm in diameter, with brin glue providing faster healing and inducing signi cantly less corneal vascularization. Both of these studies used commercially prepared bring glue which is manufactured from pooled human plasma with the addition of an anti- brinolytic agent coming from a bovine source. Although relatively safe, some patients develop adverse reactions to commercially prepared brin glue and reports have been made on the possible risk of transmission of blood-borne viral diseases from its use.Hence, further studies have investigated on the development of brin glue from an autologous source to minimize the risk of infection and immunologic reactions.

Autologous brin glue presents the main advantage of minimizing the risk for blood-borne disease transmission and reduces the possibility of an immune reaction to the product. Although sutures are still the gold standard for sealing corneal perforations, brin glue provides several advantages over sutures. Fibrin glue eliminates the need for suture removal, may cause less induced post-operative corneal astigmatism and less scar formation from suture tracts. It is also a cheaper alternative to the more expensive commercially prepared brin adhesives.

Our main objective is to determine the ef cacy of brin glue derived from a single human donor for sealing induced corneal penetrating wounds on porcine cadaver eyes compared to conventional suturing. The presence or absence of leakage in eyes sealed with brin glue will be compared to eyes sealed with sutures. Leakage pressures de ned as the intraocular pressure (IOP) at which a positive Seidel’s test is noted after increasing the IOP, will also be determined and compared between the two groups.

This is an in vitro comparative experimental study using porcine eyes. All eyes were procured within 12 hours post-mortem. Eyes with corneal pathologies, such as corneal opacities or evidence of previous trauma, were excluded. The porcine eyes were randomized in a 1:1 ratio to either brin glue or sutures.

The components of the brin glue, i.e., brinogen concentrate and thrombin, were collected from a single human donor and processed in the laboratory. The voluntary donor had no known co-morbidities and no history of bleeding disorders or coagulation factor de ciencies. The method for processing of autologous brin glue was adopted from the technique proposed by Hirsch et al. Whole blood was obtained by phlebotomy and was collected in a single blood bag with CPDA-1 as anticoagulant (Teru ex, Terumo Medical Corp., USA). The whole blood was then transferred into eight conical centrifuge tubes. Cellular components were removed by centrifugation at 2000G for 15 minutes to produce plasma. The plasma was then aspirated and transferred into another set of conical tubes for further processing. Fibrinogen was separated from the plasma by cryoprecipitation to produce a brinogen-containing precipitate and a thrombin-containing supernatant. The plasma was frozen at a temperature of -70°C. After freezing, the plasma was thawed at 4°C and subsequently centrifuged at 5000G for 10 minutes. The supernatant was then aspirated and transferred into another set of conical tubes. The remaining precipitate served as the brinogen component of the brin glue and was then collected in a 1 cc syringe for subsequent application to the area of the corneal incision.

The residual brinogen in the supernatant was removed by clotting to produce serum containing thrombin and brin. Clotting of the residual bri- nogen was accomplished by adding 0.1 volume of 0.2M calcium chloride (Fame Analytical Reagents and Laboratories, Philippines). The thrombin containing serum was then aspirated from the clotted brin into a 1 cc syringe and was used as the thrombin component of the brin glue.

At the start of the experiment, the porcine eyes were placed in a globe holder. Baseline IOP were obtained using a Tonopen (Reichert Technologies, USA) and results were recorded. A side port incision was created along the peripheral cornea using a standard 15 degree metal keratome (SatinSlit, Alcon Laboratories, USA). A gauge 21 anterior chamber maintainer connected to the Centurion Vision System (Alcon Laboratories, USA) was inserted through the side port with the infusion turned off (Figure 1). A straight incision perpendicular to the central corneal surface was made using a standard 3 mm metal keratome (Laseredge, Storz, USA) (Figure 2 ). Seidel’s test was done to assess for wound leakage at the 3 mm incision site using a sterile uorescein strip (BioGlo, HUB Pharmaceuticals, USA). Egress of uid was recorded as a positive Seidel’s test. (Figure 3 ). 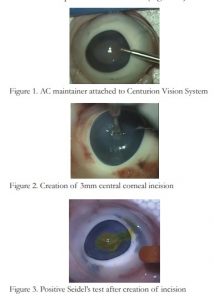 In the study group, the corneal incision was sealed using the previously prepared brin glue. The brinogen and thrombin components of the brin glue were placed in separate 1 cc syringes with gauge 27 cannulas. The incision site was dried by gentle wiping with a cellulose sponge prior to application of the brin glue. Equal amounts, approximately 0.1 mL each, of the brinogen and thrombin solutions were placed simultaneously over and within the incision site. The brin glue was then allowed to set for 3 minutes. Seidel’s test was done to check for leaks after application of brin glue. If no leakage was noted, the intraocular pressure was then manipulated using the Centurion Vision System. The intraocular pressure was set at 34 mmHg initially. If no leak was noted, the IOP was then increased by increments of 5, and the IOP at which leakage occurs was determined and labeled as the leakage pressure.

Documentation of wound leakage after sealing the incision and manipulation of intraocular pressure was done. Any sign of leakage through the incision was recorded as positive. (Figures 4 and 5) 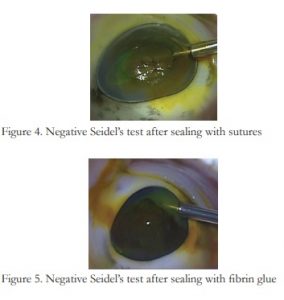 All eyes in the control group, showed no leakage immediately after sealing the corneal wounds with sutures. One out of twenty eyes in the experimental group was positive for leakage after application of the brin glue (p value = 0.5).

The baseline IOP measurements were comparable between the two groups. All eyes in the control group were negative for leakage after sealing the corneal wounds with sutures while one out of twenty eyes in the experimental group was positive for leakage after application of the brin glue. This may be due to inadequate drying of the wound area prior to application of the glue or it could be due to insuf cient deepithelialization of the area where the glue was to be applied. Statistical analysis showed no association between the presence of leakage and method of wound sealing, indicating that sutures and brin glue have the same ef cacy in sealing wounds at intraocular pressures below baseline values.

The IOP was initially set at 34 mmHg using the Centurion Vision System, since this was reported to be the mean IOP under normal physiologic stresses such as coughing, straining or Valsalva maneuver13. The mean leakage pressure of the suture group was signi cantly higher compared to the brin glue group of which all sealed eyes in the experimental group showed leakage at 34 mmHg. This nding may indicate that the tensile strength of the brin glue prepared through the method described may not be strong enough to withstand pressures above 34 mmHg. Several other methods for preparation of autologous brin glue have been described in previous studies. In a study by Cavichiolo et al, they compared the tensile strength and local toxicity of brin glue prepared by three different techniques. They concluded that all methods produced good results as far as clot formation and non-toxicity, but ammonium sulfate precipitation produced the best tensile strength among the described methods of preparation, followed by cryoprecipitate and lastly by plasma brinogen14. Although evidence from this study suggests that ammonium sulfate precipitation produces the highest tensile strength among the three, the method for preparation of this adhesive may not be readily available in a conventional blood bank. Cryoprecipitate, on the other hand, is readily processed in the blood bank and provides a suf cient amount of brinogen for use as a component of brin glue, hence the reason why we chose this method of brin glue preparation for this study.

We can only infer that the results may be comparable when used in human eyes since porcine eyes were used in this experimental animal study. The determination of the leakage pressures were initially set at the mean IOP under normal physiologic stresses. The authors recommend testing the strength of the glue under normal intraocular pressures. Also, the method of preparation of the brin glue used in the study was only one of the techniques available for the production of brin glue. Various other methods for the preparation of autologous brin glue are available and may be worth investigating.