Diabetic retinopathy (DR) is a leading cause of blindness, responsible for 4.8% of the 37 million cases of blindness worldwide, according to the World Health Organization (WHO) estimates.

In the Philippines, diabetes falls within the top 10 causes of mortality according to the Department of Health. In a hospital-based study done at the Philippine General Hospital using dilated fundus examination and uorescein angiography revealed a clinical and angiographic DR prevalence of 61.8% and 83.6%, respectively. Another study done in PGH, to determine the complications and cardiovascular risk factors among newly diagnosed Type 2 diabetics, showed a DR prevalence of 12%.

Despite advances in diagnosis and treatment of DR, there remain several barriers to screening for diabetic retinopathy among patients and attending doctors, both in developed and developing countries. In the United States, one study revealed that no perceived need for screening (39.7%) and cost of an eye examination (32.3%) were the top reasons for not getting screened for DR. In Indonesia, the lack of knowledge for the need of eye care and nancial constraints were common reasons given by patients. In China, the main reasons were lack of knowledge, no apparent symptoms and lack of advice for regular examinations from their medical provider.

Among physicians attending to diabetic patients, several studies showed varying practice patterns for screening and referring patients for ophthalmic evaluation. In the 1990s, studies showed that in Australia, about 53% of general practitioners do not perform fundus examination or screened only less than half of their patients using undilated fundoscopy;while two studies in the United States showed contrasting results. In the rst study about 70% would perform undilated fundoscopy while in the other, less than half would. Interestingly, these two studies also showed similar referral practice patterns among doctors. In the rst study about 35% of doctors never referred patients for ophthalmic evaluation while 26% referred all patients, and the remaining 39% referred on a case-to-case basis. In the second study 35% referred their Type 2 diabetic patients for ophthalmic evaluation.More recent practice pattern studies reported that in Brazil, only 21.4% performed fundoscopy but 86.9% of them would refer patients to ophthalmologists for screening. While in Canada, 19.4% of doctors felt there was no need to routinely perform fundus examination on all diabetics, but about 80.6% of them regularly referred all diabetics to an ophthalmologist; 86.1% of the participants felt there was no need to worry about retinopathy if blood sugar levels were controlled.Interestingly, two studies reported that physicians who have recently graduated (less than 5 years in practice) tend to refer more to an ophthalmologist compared to those who had been practicing for 20 or more years.

A focused group discussion among primary care providers cited the most common barriers for referral: poor communication from eye care providers, nances, and availability of an eye specialist. Suggestions from the group to improve the referral system included: implementing electronic medical records, enhancing communications within the referral network, having a regular ophthalmologist and a retinal camera in the primary care clinics.

Vision loss from DR is preventable. Evidence- based treatment is available to reduce signi cantly the risk for moderate vision loss and blindness by more than 90%. The rapidness of these new methods screening may create a paradigm shift in the referral system across medical specialties. And data from this study may reinforce the referral system as well as in uence policy-making in the health sector. 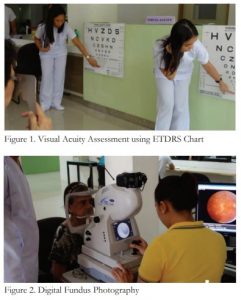 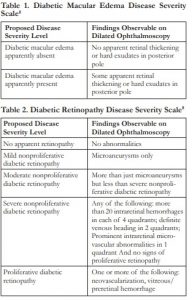 In this study, the overall prevalence of any DR was 26% (n=18): 55% mild NDPR, 33% moderate NDPR, 6% severe NPDR and 6% PDR (Figure 4). DME was present in 22% of patients with any form of DR. Figure 5 shows the sample photos obtained from the non-mydriatic camera during the study. 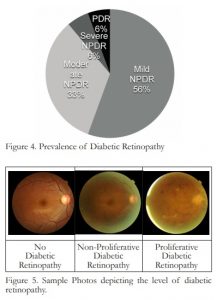 Table 3 shows the clinical characteristics of the 67 participants. Most of the patients were female (61.2%). Mean age was 60.8 (±12) years, mean duration of diabetes was 7.5 (±6.2) years and mean HBA1C level was 7.5 (±2.1)%. Compared to patients without DR, those with some form of DR were younger, had longer duration of diabetes, had a higher mean HBA1C level and most had hypertension. Insulin use was also higher among patients with DR. 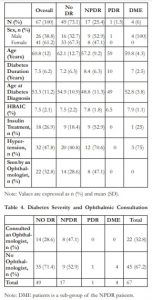 The focus group discussion reported the following reasons for consulting an ophthalmologist: presence of blurring of vision (6 out of 8 participants), availability of budget (4 out of 8), knowledge of the need for ophthalmic evaluation (2 out of 8), and order for evaluation by the internist (2 out of 8).

Interviews among the referring internists revealed three primary reasons for referring: history of visual disturbances, uncontrolled diabetes and nances of the patient.

Twenty-six percent (26%) of participants had some form of DR. This prevalence rate is lower compared to 61.8% and 83.6% noted in the PGH study. The difference can probably be attributed to the different socio-economic status of both populations, in uencing the control of their diabetes and early access to healthcare.

Patients found to have DR tend to have longer duration of DM, poorer glycemic control based on their HBA1C level and have a history of hypertension.

In this study, the two-thirds of participants were not screened for DR by an ophthalmologist since their diabetes diagnosis. These ndings were similar with the results from a paper by Dandan Wang, et al in China where nearly a third of patients did not follow the annual eye evaluations and half did not have any form of examination8; and with results reported in a poster presentation by Lee GD at the 2016 American Society of Retina Specialists (ASRS) in San Francisco, where out of the 149 patients, only 43 (29%) had a documented eye exam, and about 28% of those examined had diabetic retinopathy. The most common reasons cited for not seeking eye care were a lack of symptoms or a lack of perceived need for an eye examination, availability of budget, and a lack of knowledge about diabetic retinopathy. These reasons were consistent with the ndings of the studies done in China, Indonesia and the United States. The interviews from referring internists revealed similar responses compared to the reports done in Canada and the United States, such as lack of a perceived need for referral (no visual disturbances or controlled blood glucose levels) and the lack of nances.

There is a paucity of information about factors in uencing eye care-seeking behaviour and practice patterns with regards to diabetic retinopathy screening among diabetic Filipino patients and primary care physicians, respectively. Clinical epidemiological information in the Philippines for DR is also far from comprehensive. Therefore, a large sample survey with long-term follow-up results is needed as well as a more comprehensive study on the knowledge, attitudes and practices among Filipino patients and doctors as well as a review of the feedback mechanisms vis-a-vis the referral system among medical practitioners.

While the ophthalmologist can provide specialized eye care for the DR patient, prevention and control of diabetes and its complications lie primarily in the hands of their attending physician. Thus, results from such studies may help tailor recommendations to control the prevalence of diabetic retinopathy and help strengthen partnership among primary care physicians and eye care specialists in preventing vision loss among these diabetic patients.

There is a need to strengthen awareness among diabetic patients with regards to complications in the eye and improve the referral system among medical practitioners.

This study presented a lower prevalence rate of diabetic retinopathy among patients who underwent digital retinal photography compared to that of other studies published in the Philippines. Nevertheless, it is important to continue patient education and good control of risk factors to lower further the prevalence of DR.