One hundred eyes of 93 patients diagnosed with age­related cataract who underwent uncomplicated phacoemulsi cation and intraocular lens (IOL) implantation were enrolled in this prospective cross­ sectional study. Informed consent was obtained from all subjects that participated in this study. All patients underwent surgery at the Department of Ophthalmology, Makati Medical Center between August 2014 and September 2015. This study was approved by the Institutional Review Board of the Makati Medical Center. 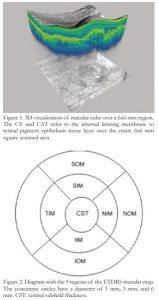 Figure 1. 3D visualization of macular cube over a 6×6 mm region. The CV and CAT refer to the internal limiting membrane to retinal pigment epithelium tissue layer over the entire 6×6 mm square scanned area.

Figure 2. Diagram with the 9 regions of the ETDRS macular map. The concentric circles have a diameter of 1 mm, 3 mm, and 6 mm. CST: central sub eld thickness.

Patients were operated by different surgeons using the In niti Phacoemulsi cation System (Alcon Inc., Fort Worth, TX, USA) under local anesthesia with topical and intracameral anesthesia. Foldable intraocular lenses were implanted. CDE was recorded at the end of each procedure. Fourth­generation quinolone eye drops and prednisolone acetate eye drops were prescribed to all patients postoperatively. No topical nonsteroidal anti-in ammatory drug (NSAID) eye drops were given before or after the surgery.

Parameters were summarized using mean and standard deviation. To determine the correlation between parameters, Pearson’s correlation coef cients and degree of association, and coef cient of determination (r2) were used. All valid data were included in the analysis. Null hypothesis was rejected at 0.05 alpha level of signi cance. STATA 12 was used for data analysis.

A total of 100 eyes from 93 subjects were examined for foveal thickness and CDE exposure post-phacoemulsi cation. At 12.42 ± 11.05 of mean CDE exposure, the fovea increased in thickness in all measured parameters: central sub eld thickness; cube volume; and cube average thickness (Table 1). 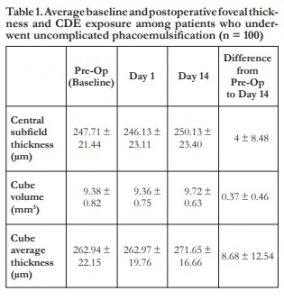 The relationship between CDE measured intra­ operatively and the change in foveal thickness values from baseline to postoperative Day 1 and Day 14 were examined. The correlation coef cients obtained for CST, CV and CAT had low association to CDE. Furthermore, only the correlation coef cients of the difference between baseline and Day 1 of CST, and the difference between baseline and Day 14 observations of CV were signi cant (0.279 and -0.206, p=0.005 and p=0.040, respectively) but still with low degrees of association. The results may re ect the possibility that the sample size was insuf cient to produce evidence to determine an association between the other foveal thickness parameters and CDE. 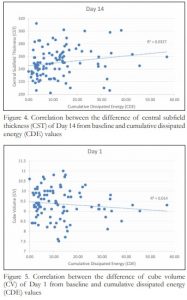 Figure 5. Correlation between the difference of cube volume (CV) of Day 1 from baseline and cumulative dissipated energy (CDE) values

Figure 6. Correlation between the difference of cube volume (CV) of Day 14 from baseline and cumulative dissipated (CDE) energy values

Figure 7. Correlation between the difference of cube average thickness (CAT) of Day 1 from baseline and cumulative dissipated energy (CDE) values

Figure 8. Correlation between the difference of cube average thickness (CAT) of Day 14 from baseline and cumulative dissipated energy (CDE) values

Despite advances in phacoemulsi cation tech- niques and technology, cystoid macular edema (CME) can occur in 0.6 to 6% of patients after uncomplicated cataract surgery. Though rare in occurrence, the most important cause of permanent decrease in visual acuity after cataract surgery is CME.8 An increase in prostaglandin production due to free­radical release following surgical trauma causes changes in the macula. Prostaglandin and other in ammatory factors are concentrated in the aqueous humor, penetrate the vitreous body, and alter the blood­retina barrier permeability at the macula, resulting to accumulation of uid in extracellular spaces.9 Since CDE equates to amount of phacoemulsi cation power or duration of surgery which result in more damage to ocular tissue, it is hypothesized that an increased CDE may result in a higher or longer release of in ammatory factors, thus thicker foveal thickness after surgery.

In this study, the fovea increased in thickness postoperatively in all measured parameters (CST, CV and CAT). Degenring et al. found an increase in foveal area thickness on postoperative days 7, 30 and 60. Using OCT, Lobo found postoperative increases in retinal thickness that peaked at 6 weeks and were still present in 22% of patients 30 weeks after surgery. Other studies, however, have not come to the same conclusion. Ching et al. in 2006 showed thicker pre­ operative foveal thickness than postoperatively. his could be due to a variety of factors, including the use of different instruments, different methods for analyzing data, and dissimilar control groups. Another element to consider is that OCT examinations can be in uenced by any media opacity, such as lens opacity and postoperative corneal edema, which may explain the difference in the measurement of retinal thickness.1

The low association of the foveal parameters to CDE may be due to the possibility that the sample size was inadequate. The researchers would have preferred to include more patients with higher CDE values. However, the inability to obtain a reliable OCT scan due to increased density of the cataract made it unfeasible. In addition, the use of minimal phacoemulsi cation energy resulted in overall lower CDE values which may make it insuf cient to produce evidence to determine association between foveal thickness and CDE.

The regression plots shown in Figures 3 to 8 show the association of CST, CV and CAT to CDE. The direct correlation shown in Figures 3 and 4 compared to the inverse correlation shown in Figures 5 to 8 implies that thickening in the central 1 mm sub eld centered at the fovea is more prominent as compared to the peri­ and parafoveal areas. Similarly, a study by Mourgela et al. analyzed macular thickness after uncomplicated cataract surgery. The results showed signi cant increase of macular thickness parameters, both at 1st and 3rd month postoperative visits while CV and CAT were signi cantly decreased between postoperative visits.

Even though postoperative increase in foveal thickness may be minimal and clinically asymptomatic, it represents a key occurrence which may lead to formation of CME. Taking into account the increasingly large number of patients undergoing phacoemulsi cation surgery, despite the fact that clinically signi cant CME is rare, it is critical for us to comprehend the mechanisms and postoperative changes in the macular region in relation to cataract surgery. Further studies are needed to investigate a possible relation between CDE and foveal thickness.