Ultrasound biomicroscopy (UBM) is an eye imaging technique which can produce high resolution, micron-scale, cross-sectional imaging of the anterior segment, retro-irideal structures, and ciliary processes. It can provide qualitative and quantitative evaluation of structures and their anatomical relationships in vivo without the need for histologic specimens.1,2

UBM can determine linear and angular parameters which define the characteristics of normal as well as glaucomatous eyes.3,4 One of these parameters is the ciliary sulcus diameter (CSD), which is the distance between ciliary sulci passing through the center of the anterior segment (Figure 1). 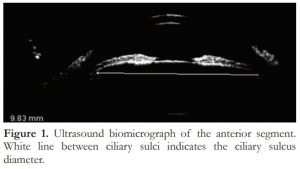 In eyes for cataract surgery, posterior chamber intraocular lenses (PC-IOL) provide optimal correction of aphakia as the position of the optics closely simulate those of the crystalline lens.5 However, in the presence of a compromised posterior capsule due to ocular trauma or surgical manipulation, the ciliary sulcus is the next-best site for PC-IOL fixation. Successful sulcus fixation of a PC-IOL requires adequate contact between the haptics and the ciliary sulcus. Appropriately-sized PC-IOLs, when fit into the ciliary sulcus, do not shift, tilt, and drop into the vitreous. Any disparity between the PC-IOL length and the CSD may result in failure of sulcus fixation, IOL decentration, uveal erosion, hyphema, and narrowing of the anterior chamber angle and secondary glaucoma.6-8 Establishing the range of CSDs among Filipino eyes would be valuable in the selection of the appropriate PC-IOL size for adequate sulcus fixation.

In the past, surgeons estimated sulcus size by measuring limbus size or white-to-white distance with a caliper. However, several studies have shown that white-to-white distance poorly correlated with sulcus size. In a study involving phakic cadaveric eyes, Werner and Izaka did not find any correlation between white-to-white measurements and horizontal and vertical ciliary sulcus diameters.9 Poor correlation between caliper-measured white-to-white distance and UBM-derived CSD was also reported by Pop et al.10 External eye measurements may not be accurate for the determination of CSD. The purpose of the study was to measure the CSD in normal Filipino eyes using UBM. Establishing the range of CSDs would be valuable in selecting the appropriate PC-IOL size needed for adequate sulcus fixation.

Patients
This study was an observational, cross-sectional study conducted in the Outpatient Department of Makati Medical Center, Manila, Philippines between September and December 2006. Patients who had essentially normal or non-visually significant internal eye examination findings were recruited. Eyes with history of trauma, intraocular surgery, or congenital anomalies (e.g. microphthalmos, megalocornea) were excluded from the study. Eyes with active infection were likewise excluded to avoid contamination of instruments. Informed consent was obtained prior to actual procedure.

Ultrasound Biomicroscopy Examination Technique
All measurements were performed by a single examiner (B.J.M.H.) using a UBM Scan 1000 (Ophthalmic Technologies Inc., Toronto, Ontario, Canada) with a 35-50 MHz transducer probe allowing 4-5 mm tissue penetration and approximately 50 μm resolution. Examinations were performed under constant room illumination. While supine, the patient was asked to look at a fixation target on the ceiling.

The cornea was anesthetized with a drop of proparacaine hydrochloride 0.50% (Alcon, Couvreur, Belgium). A polymethylmethacrylate shell was inserted between the lids and was filled with sterile Eye Wash (Bausch and Lomb, Rochester, New York, USA). An immersion probe was applied to the waterbath. Recorded images were saved in the machine’s computer. CSDs were later measured using the computer calipers included in the equipment soft-ware.

Ciliary Sulcus Diameter Measurements
With the aid of software calipers, the vertical and horizontal CSDs were taken from saved recorded images by the same investigator who performed the UBM. The vertical CSD was measured from the superior iris root at the ciliary process to the inferior iris root. The horizontal CSD was measured from the nasal iris root at the ciliary process to the temporal iris root. To ensure reproducibility of measurements, three measurements were performed for each parameter and were averaged to get the final value. The average CSD for each eye was computed by getting the average of the vertical and horizontal CSD.

Statistical Methods
Paired Student’s t-test was used to compare CSD measurements of the vertical and horizontal meridians as well as those of the right and left eyes. Using one-sample t-test, a comparison was made between the horizontal CSDs derived from this study and values from 43 eyes (24 patients) in a Canadian study cohort.10 P -values of <0.05 were considered statistically significant.

In this study, vertical and horizontal CSDs among adult Filipino phakic eyes were measured using UBM. These values may serve as guidelines for the determination of appropriate PC-IOL size for ciliary sulcus implantation in Filipino eyes.

Our findings showed that CSDs in Filipino eyes ranged from 9.76 ± 0.42 mm (horizontal) to 10.00 ± 0.48 mm (vertical). This suggests that IOLs with comparatively small haptic-to-haptic diameters (i.e., those which measure between 11.5 and 12.5 mm) may fit snugly within the ciliary sulci of Filipino eyes.

Using UBM, horizontal CSDs of Filipino eyes appeared to be significantly smaller than the values published by Pop et al. involving 43 eyes. While this difference may be real, the disparity may be due to utilization of different UBM machines. For this study, an OTI UBM Scan 1000 was employed, while a Humphrey Instruments Model 840 Bio-microscope (Carl Zeiss Meditec Inc., Dublin, CA, USA) was used in the study by Pop et al.10 A comparative study of the calibrations of these machines would be helpful in clarifying whether this is the source of the difference.

Although ultrasound biomicroscopy has the potential to elucidate anatomic relationships posterior to the iris, caution is warranted in interpreting quantitative differences, particularly when anatomic landmarks or structures are inadequately imaged or subjectively determined. The optimal parameters for quantitative UBM also requires further refinement. Caliper placement is subjective in nature and is best done at one time by a single observer.

In conclusion, the average CSD measurements in adult Filipino eyes is 9.88 ± 0.47 mm; the vertical CSD is significantly larger compared to the horizontal CSD.