Glaucoma drainage device (GDD) implantation is the surgical procedure of choice for complicated or recalcitrant glaucoma or for eyes with high-risk factors for trabeculectomy failure. Due to their prohibitive costs, it was only recently that GDD implantation was being done more frequently at the Department of Health (DOH) Eye Center, East Avenue Medical Center, Philippines. Glaucoma fellows at DOH Eye Center have only started performing GDD implantation in the last three years. To date, there has been no study analyzing the surgical outcomes of GDD implantation performed by fellows.

The objective of this study is to describe surgical outcomes of patients who underwent GDD implantation at the DOH Eye Center. While many studies provide evidence for efficacy and safety of GDD implants, these studies report outcomes of surgeries performed by experienced glaucoma surgeons. This study focuses on the outcomes of GDD surgery performed by glaucoma fellows, who are surgeons-in-training.

This was a retrospective chart review of all consecutive GDDs implanted by glaucoma fellows from February 1, 2015 to March 31, 2017 at the DOH Eye Center of East Avenue Medical Center, Philippines. Only charts of patients with a minimum of 6 months post-operative follow-up were included in the study. The following information were collected from the charts: age, gender, race, glaucoma diagnosis, lens status (phakic, aphakic, or pseudophakic), previous intraocular surgery including trabeculectomy, type of GDD used (Ahmed® or Baerveldt®), and quadrant position of the drainage device (superotemporal, superonasal, inferotemporal, inferonasal). In addition, pre-operative and post-operative visual acuity (VA), intraocular pressure (IOP), and number of anti-glaucoma medications were recorded. Complications arising from GDD implantation in the post-operative period were also listed down.

Glaucoma fellows performed all the surgeries and all first-time GDD implantations by them were under the direct supervision of a glaucoma consultant. Surgical techniques and post-operative management were generally similar for all cases. Conjunctival peritomy was done with blunt disOPHTHALMOLOGYsection of Tenon’s fascia, exposing the scleral bed. GDDs were primed with balanced salt solution. The Ahmed® GDDs (New World Medical, Inc, Rancho Cucamonga, CA, USA) were inserted at least 10 mm posterior to the corneal limbus while the Baerveldt® GDDs (Pharmacia, Iovision, Irvine, CA, USA) were placed at least 12 mm posterior to the corneal limbus. The GDD plate was sutured to the sclera using nylon 10-0 suture. A scleral incision for the GDD tube to enter the anterior chamber was made around 4-5 mm posterior to the corneal limbus, where partial thickness dissection was done using a crescent knife. Unlike the conventional procedure, no scleral patch grafts to cover the GDD tubes were used in any of the cases. The anterior chamber was entered through the scleral incision with a 23-gauge needle parallel to the iris plane. The distal end of the GDD tube was cut bevel-up and inserted into the anterior chamber, taking care not to touch the corneal endothelium or the iris. Anterior chamber paracentesis was done, then the tube was anchored with a nylon 10-0 suture. For the Baerveldt® GDD, a polyglactin 7-0 ligature was tied tightly with fenestrations cut on the tube to control IOP immediately post-operatively. The conjunctival peritomy was closed with nylon 10-0 sutures. Post-operative prednisolone acetate and moxifloxacin eye drops were prescribed at least four times a day and adjusted with the clinical response. Anti-glaucoma medications were stopped immediately post-operatively for the Ahmed® GDD but partly maintained for the Baerveldt® GDD through the first post-operative month and adjusted as needed until there were signs that the ligature had already absorbed.

Summary statistics were reported as mean with standard deviation for continuous variables (e.g. age, IOP, and number of anti-glaucoma medications) and in percentages for categorical variables (e.g. gender, success rate, complications). Paired t-test was used to compare mean differences in IOP, number of anti-glaucoma medications and visual acuity during the pre-operative and post-operative periods. Yate’s chi-square test was used to compare proportions. Analysis of variance was used to compare differences between type of implant from pre-operative to post-operative IOP, medications, and VA. Line graphs were generated to show trends in IOP and medications. Independent t-test was used to compare between complete success and qualified success or failure. Chi-square test of association was used to determine association between lens status, operations prior to and after GDD with complete success of GDD implantation. Statistical significance was based on P-value ≤0.05. Data processing and statistical analyses were performed using STATA v13.

A total of 17 eyes (16 subjects) were included in the study. All patients were Filipinos. Twelve eyes received the Ahmed® GDD, while five eyes received the Baerveldt® GDD. Patient demographics as well as GDD types are presented in Table 1. The mean follow-up time was 11.18 ± 6.74 months. 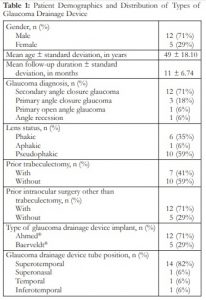 Table 3 summarizes the primary outcome variables (IOP, number of anti-glaucoma medications, and VA), complication rates and pre-defined surgical outcomes (complete success, qualified success, failure) according to GDD type. In the Ahmed® GDD group, there was significant reduction in the mean IOP (P =0.003) and mean number of anti-glaucoma medications (P <0.0001) at the final visit. Mean VA was unchanged (P =0.713). Five eyes (41.67%) had at least one complication. Four eyes (33%) were classified as complete success. Six (50%) and two (17%) eyes were classified as qualified success and failure, respectively. In the Baerveldt® GDD group, significant reduction in the mean IOP was likewise observed (from 34.40 ± 14.63 mmHg to 15.80 ± 5.50 mmHg at final visit, P =0.019). Although there was a decrease in the number of anti-glaucoma medications on the final visit (1.0 ± 1.0 from 2.83 ± 1.0), this change was not statistically significant (P =0.052). There was also no significant difference in the VA at final visit when compared to baseline (P =0.269). All 10 eyes implanted with Baerveldt® GDD developed at least one complication (100%). Two eyes were classified as a complete success (40%); two more eyes were classified as a qualified success (40%). One eye was classified as a failure (20%). Overall, surgical outcome was classified as a success in 6/17 (35%) of eyes, a qualified success in 8/17 (47%) of eyes, and a failure 3/17 (18%) of eyes. Fourteen (14) out of 17 eyes (82%) were able to maintain IOPs within target levels of 6 to 21 mmHg with or without additional medication on last follow-up. 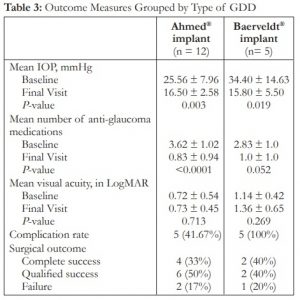 Figure 1: Change in Intraocular Pressure after Implantation with GDD over Time

Figure 2: Number of Anti-Glaucoma Medications after Implantation of GDD over Time

Table 4 summarizes the overall complication rates and types after GDD implantation. Ten eyes developed at least one complication. The most common complication was post-operative hyphema seen in 5 cases. In all cases, hyphemas spontaneously resolved after a few days without the need for a secondary surgical interventions. There were 2 cases of vitreous hemorrhage that also resolved spontaneously with conservative management. Two eyes developed choroidal detachment that responded well to a short course of oral prednisone. There was one case of tube obstruction with IOP spike that required a second surgery to flush the GDD tube. Additionally, tube exposure was noted in 2/17 cases (12%). Conjunctival resuturing was performed in one eye, while conservative management was decided in the other case. None of the eyes developed endophthalmitis at final visit. Two eyes had cataract progression following GDD implantation. Cataract surgery was performed in one eye.

Table 5 shows the list of ocular factors that may influence success and failure in eyes that underwent GDD implantation. There is a trend that a lower mean pre-operative IOP is a predictor for success. The eyes that had successful outcomes defined by good IOP control without need for anti-glaucoma medications had lower mean pre-operative IOPs compared to eyes that were classified as qualified success or failure (22.28 vs 31.26 mmHg, P =0.05). Lens status, previous intraocular surgery, and additional intraocular surgery after GDD implantation were not predictive of success.

Table 5: Ocular Factors That May be Predictive of Complete Success or Failure of GDD Implantation 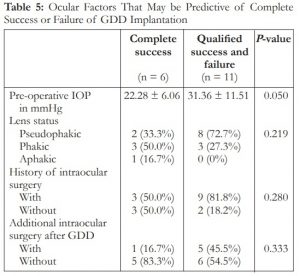 This study describes the surgical outcomes of 17 glaucomatous eyes that underwent GDD implantation by glaucoma fellows at a single institution. IOP on the average was noted to be elevated at 1 month post-operatively, most likely due to the phenomenon of the hypertensive phase, which decreased at 3 months post-operatively. The hypertensive phase is a period of elevated IOP usually within 1-6 weeks post-operatively, which is probably due to the early exposure of aqueous humor to the GDD capsule. With early exposure of the GDD capsule to aqueous humor, the capsule becomes theoretically less permeable and thick-walled, resulting in higher IOPs. Baerveldt® GDDs had higher mean IOP in the early post-operative period but by month 3, the mean IOP of both implants were already similar. This could be probably explained by the effect of the polyglactin ligature tied on the Baerveldt® GDD tube to prevent post-operative hypotony, which typically dissolves in about 6 weeks.

Results of our study show that GDD implantation performed by glaucoma fellows at a single institution, led to stable VA, and considerable reductions in IOP and number of anti-glaucoma medications. This is consistent with Asian retrospective studies that investigated the efficacy and safety of GDD implantation. However, their data were based on outcomes of experienced glaucoma surgeons, not fellows-in-training.

Complication rate was also significantly higher in the Baerveldt® group (100%) than in the Ahmed® group (41.6%) (P <0.0001). This may have been due to the limited surgical experience in handling Baerveldt® GDDs by the fellows.

This study is limited by its retrospective nature and small sample size. Despite its limitation, results of the present study illustrate the differences in outcomes and complication rates between eyes implanted with Ahmed® and Baerveldt® GDDs by glaucoma fellows.