In diabetic patients, current evidence illustrates that neuronal degeneration can happen before the appearance of microvascular changes. A study by Rodrigues et al. involving 102 patients showed that there is a significant thinning of RNFL in diabetic patients even in the absence of clinically apparent diabetic retinopathy. They concluded that neuroretinal changes occur before vascular signs of diabetic retinopathy.8 These findings were consistent with study conducted by Chhablani et al. in 2015.9 Additionally, Shahidi et al. demonstrated a significant reduction in the inferior RNFL quadrant in relation to the neuropathy disability score. The observed reduction was unrelated to age, retinopathy stage, and glycemic status.

Biological and social factors among different ethnic groups have been implicated in the disparities in prevalence and presentation of diabetes and its complications. Hence, it is important to do this study on Filipinos considering the unique genetics and different sociocultural profile of our population. Additionally, it is also important to explore if certain neuroretinal anatomical changes are related to peripheral neuropathy independent from retinal vascular changes seen in diabetic patients. These neuroretinal changes may cause early unrecognized defects in visual function in diabetic patients with peripheral neuropathy. If significant relationship between RNFL thickness and peripheral neuropathy will be established among Filipinos, then eye care practitioners may become an important part of multidisciplinary teams, including endocrinologists and podiatrists, in treating diabetic complications.

The primary goal of this study is to determine the relationship between diabetic peripheral neuropathy and RNFL thickness among elderly Filipinos with type 2 diabetes mellitus. It also aims to identify the effects of age, sex, retinopathy status, and duration of diabetes on RNFL thickness.

This was a cross-sectional study involving 106 patients aged 60 years and older with type 2 diabetes mellitus from the General Medicine and Diabetes Clinics of a tertiary government hospital. All eligible participants have best-corrected visual acuity equal to or better than 6/9, can understand and speak Filipino, and can follow the study procedures. Exclusion criteria include presence of coexisting ocular diseases, intraocular pressure (IOP) of >21 mmHg by Goldmann applanation tonometry, cup- to-disc ratio >0.8 in at least one eye, presence of severe, non-proliferative and proliferative diabetic retinopathy, history of photocoagulation, glaucoma, media opacities that prevent good view of the fundus, and history of neuropathy unrelated to diabetes.

Each participant underwent measurement of RNFL thickness in both eyes using an OCT. OCT imaging was performed with a Cirrus® HD-OCT (Carl Zeiss Meditec, Dublin, CA, USA) machine centered on the optic nerve head. The Cirrus-1 pt HD-OCT algorithm automatically identifies the center of the optic disc and creates an artificial B-scan in the shape of a circle with a 3.46 mm diameter around it. HD-OCT imaging was generated using the optic disc cube 200 x 200 protocol (software version 6.5.0.772). A global mean RNFL thickness was generated in addition to temporal, superior, nasal, and inferior quadrant averages.

Assessment of Other Variables

The participants were interviewed for their basic demographic information. Diabetic retinopathy was assessed by funduscopic examination carried out through dilated pupils by the primary investigator and were classified according to the Early Treatment Diabetic Retinopathy Study.11

Table 1. Demographic and clinical characteristics of subjects with and without diabetic peripheral neuropathy. 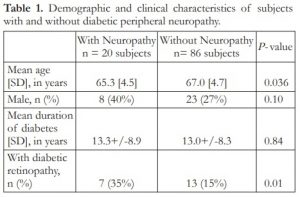 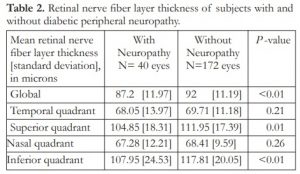 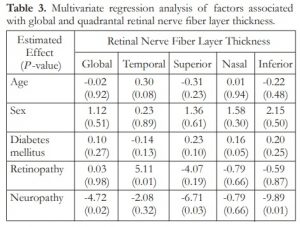 RNFL thinning in individuals with diabetic peripheral neuropathy was not observed in all quadrants. In this study, there were preferential losses in the superior and inferior RNFL. The superior RNFL is formed by the convergence of the ganglion cell axons from the superior retina, while the inferior RNFL represents axons from the inferior retina. Thinning of the RNFL may indicate retinal damage or loss in the corresponding region. Increased thinning in the superior and inferior RNFL may suggest increased susceptibility of the superior and inferior retinas to initial damage brought about by hyperglycemia compared to the other regions of the retina (macula and nasal retina). In the study by Sugimoto et al., both retinal and RNFL thicknesses in the superior region were found to be significantly thinned out in eyes of diabetic patients in the absence of diabetic retinopathy.13 Tang et al. also demonstrated significantly more microaneurysms and damaged capillaries and pericytes in the superotemporal retinas harvested from diabetic cadavers. Microvascular damage is unequally distributed in the retina even though the hyperglycemia level is the same across all regions. Moreover, Lövestam-Adrian et al. reported reduced electrical potential in the inferior retina of subjects with diabetic neuropathy.15 They suggested diminished electrical potential in a certain region of the retina can be an indicator of neurodegeneration. Additionally, the inferior region of normal human retina has been reported to receive less blood flow per nerve fiber tissue volume compared to the other sectors.16 Due to its relative thickness, the inferior retina requires the greatest amount of oxygen and blood supply. Thus, the high metabolic demand of the inferior RNFL negatively affects its adaptive mechanism to the metabolic stress secondary to diabetes and may make it more prone to ischemic insults.

Statistically, retinopathy has no significant effect on RNFL thickness. Even though manifestation of retinopathy was observed to have a significant effect in the temporal RNFL quadrant, an opposite trend inconsistent with the other quadrants was recorded. The findings of the current study support the hypothesis that neuronal degeneration precedes microvascular abnormalities in diabetes. Rodrigues et al. reported RNFL thinning in diabetic patients without diabetic retinopathy.8 Moreover, reductions in the retinal electrophysiologic parameters have been reported to precede clinical signs of diabetic retinopathy.15 In a postmortem study conducted by Barber, early apoptosis of retinal neural cells was observed in diabetic subjects.14 Shahidi et al. and Srinivasan reported that neuropathy and retinopathy differ in the retinal area of their affectation. The neuropathic effects are more concentrated at the peripapillary nerve fiber layer while retinopathy affects thickness of the parafovea. 7,10

In conclusion, there were significant reductions in the superior, inferior, and global RNFL thickness in subjects with diabetic peripheral neuropathy. These were not influenced by age, sex, duration of diabetes, and presence of diabetic retinopathy. RNFL thinning has an important implication in the management of diabetic patients. This could underlie early and unrecognized defects in visual function in diabetic patients with peripheral neuropathy in the absence of clinical diabetic retinopathy. Future studies are recommended to evaluate the visual function in this group of patients.