Visual field examination is an essential step in the comprehensive evaluation of ophthalmology patients, especially those with glaucoma, neuro-ophthalmologic as well as retinal problems. At present, there are several automated perimetry machines being used in different eye care facilities worldwide. In our country, most large hospitals and centers are equipped with automated perimetry machines like the Humphrey or the Octopus visual field analyzer. In small clinics and far flung provinces, it might be difficult to refer a patient for automated visual field examination because it is not always available or accessible.

With the rapid developments in technology, gadgets have found a place in medicine. Software and hardware developments are increasingly being put to use in medicine, and ophthalmology is not an exception. The iPad “VisualFields Easy” created by George Kong softwares is a free and easily downloadable application which has been described as a handy tool to examine visual fields. However, its accuracy and reliability are still being tested. In a study done in Nepal by Johnson et al1, the ability of the “VisualFields Easy” to perform visual field screening was tested in 450 eyes (200 healthy normal eyes, 200 glaucoma eyes, and 50 diabetic retinopathy eyes). Results were compared to the findings of each eye using a 24-2 SITA Standard program on a Humphrey Field Analyzer. They concluded that the “VisualFields Easy” application can quickly and easily identify moderate and advanced glaucomatous loss. This interesting study led us to investigate the applicability of this program in our setting.

We used an analytical study design that was approved by the ethics review board of the institution. In accordance with the Declaration of Helsinki, all subjects gave informed consent to participate.

Subjects were recruited from the Ophthalmology Out-Patient Department of our institution. They were patients requiring visual field examination as part of the comprehensive evaluation of their ophthalmologic condition over a specified period of time. Inclusion criteria were the following: (i) 18 years of age or older, able to comprehend and follow commands; (ii) best corrected near vision Snellen equivalent of 6/60 (20/200) or better; and (iii) good fixation during Humphrey perimetry testing. Those who were unable to finish both tests (Humphrey and “VisualFields Easy”) were excluded.

Sample size computation was based on the assumption of having a 95% confidence level, 80% sensitivity and specificity (as reported by Maxine Liner in Eyeworld, 2015) and 10% margin of error (N= (1.96) sq x 0.80 x 0.20/(0.10) sq). A minimum of 61 patients with positive findings on the gold standard Humprey Field Analyzer and 61 with normal visual fields was followed.

Each subject was tested for uncorrected and best corrected visual acuity for far and near refraction, and slit lamp findings were noted. Automated refraction was done to determine appropriate lens correction. The standard automated Humphrey Field Analyzer (Carl Zeiss Meditec, Inc., Germany) with the 30-2 Swedish Interactive Thresholding Algorithm (SITA) procedure was explained to each patient by a trained technician who also monitored the progress of their examination. Standard correction for near vision was given to the patient, and the patient was tested one eye at a time. After proper positioning, the patient was asked to fixate on a central fixation point and press on a button from a handheld remote control whenever a stimulus was seen. The results were printed out and filed. The subject was then asked to rest for 20 minutes before proceeding to the visual field testing using the “VisualFields Easy” application.

The “VisualFields Easy” application (background = 10 cd/m2; size V target; 16-dB stimulus) loaded in an iPad 2 ver. 8.3 was used in this study. The iPad “VisualFields Easy” testing procedure was explained to the patient by the investigator. Wearing the same correction for near vision, the patient was positioned 13 inches or 33 centimeters away from the iPad monitor which was placed perpendicular to the patient’s line of sight. While one eye was being tested, the fellow eye was patched. The patient was asked to fixate on the red dot located on one of the corners of the iPad monitor. The subject was asked to tap anywhere on the iPad screen whenever a white dot was seen. This was repeated until the test was completed. Results were then printed out and filed.

The reliability of parameters of each test was assessed based on the false positive and false negative responses of the patients as seen on the print outs (Figure 1). 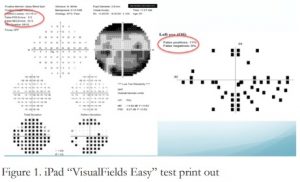 A correlation between the mean false positive and false negative errors of the two tests was done using a two-tailed T-test with a Confidence Interval of 95% (p<0.05) which revealed a p-value of 0.02 for the false positives and p-value of 0.03 for the false negatives. There is no statistically significant difference between the reliability parameters. Both exam results were thus deemed reliable enough for interpretation to proceed.
Table 1: Correlation of False Positive and False Negative errors using the standard Humphrey Field Analyzer and the iPad “VisualFields Easy” application 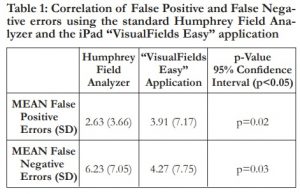 Print outs obtained in the two tests were read independently by the principal investigator and verified by a glaucoma specialist. Results were classified as NEGATIVE or normal/non significant visual field defect, or POSITIVE if with any form of visual field defect. Computation was done for sensitivity, specificity, positive predictive value (PPV) and negative predictive value (NPV). 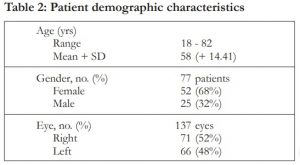 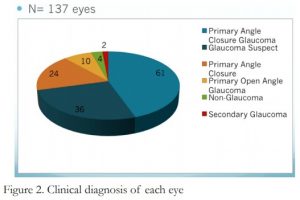 Figure 2. Clinical diagnosis of each eye 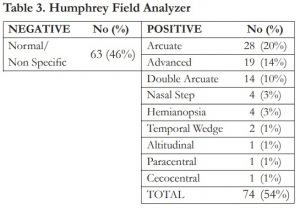 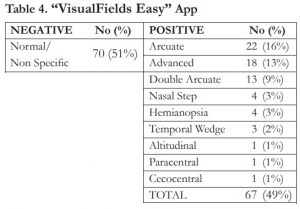 In summary, there were a total of 74 positives and 63 negative visual field defects for the Humphrey. These were considered as our True Positive (TP) and True Negative (TN) values. For the “VisualFields Easy” application, there were 67 positives and 70 negatives (Table 4). 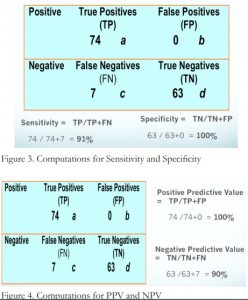 Figure 3. Computations for Sensitivity and Specificity

Figure 4. Computations for PPV and NPV

Automated perimetry is an essential tool for assessment of both glaucomatous and non-glaucomatous visual field defects. Studies done by Alencar and Medeiros2, and Reitner et al3, both stress the need for perimetry testing to diagnose glaucomatous or neuro-ophthalmic diseases. In developing countries like ours, limitations to the newer technologies become a challenge for us to efficiently manage our patients.

Our study was designed to compare visual field testing using the iPad application “VisualFields Easy” with the standard Humphrey Field Analyzer. Sensitivity measures the proportion of positives that are correctly identified as such. The results showed that the “VisualFields Easy” had a sensitivity of 91%. This indicates that the test is unable to pick up some early visual field defects, but once the defect is well established, the application is able to detect it.

On the other hand, specificity measures the proportion of negatives that are correctly identified as such. Our results showed a specificity of 100%. This means that all patients who truly had a negative field defect tested negative on the “VisualFields Easy” application.

The same way, PPV is the probability that subjects with a positive screening test truly have the defect. In our study, with a PPV of 100%, a positive visual field test is predictive of a real defect. NPV is the probability that subjects with a negative screening test truly do not have the defect. With our result of a NPV of 90%, a negative “VisualFields Easy” test does not completely rule out the presence of a visual field defect. This may occur in early or subtle visual field loss.

A striking difference was noted, however, in the mean duration time between the two tests wherein the “VisualFields Easy” application had a mean test duration of 201 seconds (SD + 0.01) which is only about 42.77% of the mean test duration using the standard Humphrey perimetry. Reitner et al concluded in their study that shorter testing time results in increased acceptance of patients, lesser fatigue-induced artifacts, and increased possibility of patients completing a perimetry test. On the other hand, the shorter testing time may be due to the fact that the “VisualFields Easy” has limited testing points and reliability indices such as fixation losses, mean deviation, total deviation and pattern standard deviation as compared to the standard Humphrey Visual Field analyzer. These limitations may explain why the application can miss early visual field defects and detect moderate to advanced field loss.

Also, the absence of gaze trackers, which are present on every Humphrey Field Analyzer printout, also limit the ability of the “VisualFields Easy” application to record any fluctuations and eye movements affecting the sensitivity of the test.

CONCLUSION
The “VisualFields Easy” application is a quick, easily accessible and fairly reliable way of measuring visual field abnormalities, both for glaucoma and neuro-ophthalmology patients. The application is not intended to replace standard automated perimetry machines, but it may have a role in detecting, documenting and monitoring visual field defects in low resource settings where visual field tests are not available. 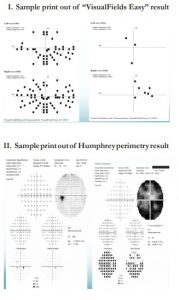 I. Sample print out of “VisualFields Easy” result