Excimer laser was approved by the US FDA in 1995 to reshape the cornea. Since then, significant developments in the correction of refractive errors have been achieved. These advances led to the development of modern laser in situ keratomileusis (LASIK) procedures. LASIK is currently the most widely used refractive surgical procedure to treat myopia and astigmatism.1 Advantages include early postoperative improvement and stabilization of visual acuity, minimal postoperative patient discomfort, and the possibility of enhancement in the future. More recently, the femtosecond laser has been used to create the corneal flap in LASIK with more precision and safety instead of the microkeratome.

Despite the advantages of LASIK, flap-related complications like flap striae, flap dislocation, diffuse lamellar keratitis, epithelial ingrowth, and dry eye have been reported in varying frequencies. Serious complications like iatrogenic ectasia, though rare, have been associated with LASIK.2 In small incision lenticule extraction or SMILE, the femtosecond laser creates a refractive stromal lenticule that is extracted through a 2 to 4 mm incision to correct myopia and astigmatism. SMILE, a flapless corneal refractive surgical procedure, eliminates flap-related complications like free flaps, buttonholes, flap dislocation and epithelial ingrowth. Furthermore, since no flap is created, lesser corneal nerve fibers are cut and corneal biomechanical strength is less compromised. This thereby reduces the risk for patient discomfort, dry eye, and ectasia. Added benefits of SMILE versus F-LASIK would include lesser decrease of subbasal nerve fiber density, lesser decrease in central corneal sensitivity, and lesser keratocyte apoptosis, proliferation and inflammation. This all-in-one femtosecond corneal refractive laser procedure, since a separate excimer laser is notneeded, was described by Sekundo et al. in 2011 and became available in the Philippines at the end of 2013. As a new procedure, there are few studies published in literature comparing SMILE to a standard corneal refractive laser procedure such as Femto-LASIK (F-LASIK). Hence, we compared the efficacy, safety, stability and refractive predictability of patients who had SMILE and F-LASIK for the correction of moderate myopia and astigmatism. This study represents the first cases of SMILE done in the Philippines.

This study was approved by the Institutional Scientific Review Committee and the Ethics Review Board of the Research and Biotechnology Group of the St. Luke’s Medical Center. (Approval number: CT-15050)

A review of charts was conducted at the Vision Laser Center of St. Luke’s Medical Center-Global City. All patients who underwent SMILE from January 2014 to July 2014, with adequate follow-up at 1 day, 1 week, 1 month, 3 months and 1 year were included in the study. Age-matched and refraction-matched patients who underwent F-LASIK from January 2012 to April 2014, with follow-ups at 1 day, 1 week, 1 month, 3 months and 1 year postoperatively, were chosen as comparators. Primary outcome measures are refractive predictability, efficacy, safety and stability. Efficacy is defined as the percentage of eyes achieving uncorrected visual acuity (UCVA) of 20/25 or better during the postoperative follow-up. Safety is measured by the loss of two or more optotype lines of best spectacle-corrected visual acuity (BSCVA) at 1 year postoperatively. Refractive predictability refers to the proportion of eyes achieving a postoperative spherical equivalent (SE) within ±0.50 D of the intended target. Stability will show if there is a statistically significant change in the spherical equivalent during the postoperative follow-ups. Included were those with myopic or myopic astigmatism with a spherical equivalent of -2.00 D to -8.00 D, preoperative BSCVA of 20/20 or better, target refraction of emmetropia, first time to undergo either SMILE or Femto-LASIK and at least 18 years of age. UCVA, BCVA, attempted refraction versus achieved refraction, and adverse events were compared preoperatively, and at 1 day, 1 week, 1 month, 3 months and 1 year postoperatively in both groups. Excluded are those patients with inadequate follow-up data of less than 1 year. SMILE and LASIK flap creation were done using the VisuMax® femtosecond system (Carl Zeiss Meditec, Jena, Germany). LASIK was done using the MEL80 excimer laser (Carl Zeiss Meditec, Jena, Germany). Refractive surgery specialists performed all the procedures. Preoperative and postoperative data gathered included UCVA, BSCVA and manifest refraction in spherical equivalent. Visual acuity was measured using SmartChartTM visual acuity system (OptoGlobal, South Australia, Australia) with a standard test distance for all patients. LogMar values of visual acuity were obtained. Postoperative medications such as tobramycin-dexamethasone (Tobradex, Alcon) solution and hydroxypropyl methylcellulose (HPMC); (Genteal, Novartis) solution were the same for both groups.

A statistician analyzed the data using Statistical Package for the Social Sciences (SPSS) v16.0 (www.ibm.com). Patient characteristics, mean spherical equivalent through time, mean UCVA and proportion of patients having UCVA of 20/25, 20/20, 20/16 vision at 1 day, 1 week, 1 month, 3 months and 1 year postoperatively were compared. Attempted versus achieved refraction and proportion of patients with BSCVA that have lost or gained vision after 1 year postoperatively were also taken.

Twenty-eight SMILE charts were reviewed and 10 charts were excluded due to inadequate follow-up.A total of 35 eyes of 18 patients were included in the SMILE group and 38 eyes of 19 patients in the F-LASIK group. Table 1 shows the preoperative patient characteristics. The baseline characteristics of the two groups were similar. (Table 1) 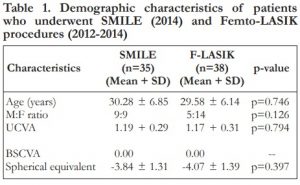 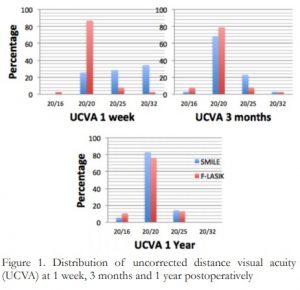 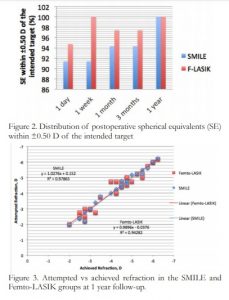 Figure 2. Distribution of postoperative spherical equivalents (SE) within ±0.50 D of the intended target

Figure 3. Attempted vs achieved refraction in the SMILE and Femto-LASIK groups at 1 year follow-up. 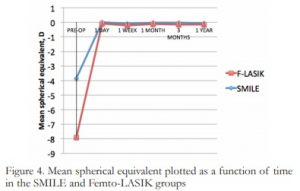 Figure 4. Mean spherical equivalent plotted as a function of time in the SMILE and Femto-LASIK groups 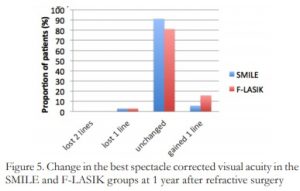 Figure 5. Change in the best spectacle corrected visual acuity in the SMILE and F-LASIK groups at 1 year after refractive surgery

One eye for SMILE was converted to Femto-LASIK due to inability of the eye to focus on the target. However, there were no postoperative complications noted during the follow-up periods for both groups.

Small incision lenticule extraction (SMILE) is a relatively new technique for corneal refractive surgery. The few published literature manifests its predictability, safety, and efficacy similar to F-LASIK during the short-term follow-up. This paper represents the first cases of SMILE done in the Philippines, and we describe our initial results for SMILE for the treatment of myopia and myopic astigmatism.

In our study, both SMILE and F-LASIK showed excellent efficacy, safety, and predictability. SMILE was comparable to F-LASIK. Its efficacy and safety indices were analogous with other studies on femtosecond lenticule extraction procedure by Kamiya et al.,5 and SMILE by Hjortdal et al.10 However, there is a slight delay in visual recovery in SMILE. Both groups showed a recovery trend as time passed. Visual outcomes of F-LASIK appear to be slightly better than SMILE during the first month after surgery but stabilized at 3 months postoperatively. There were month follow-up. At 3 months, 71.5% of SMILE and 86.8% of F-LASIK groups achieved 20/20 or better vision. A study by Lin et al showed better results in terms of proportions of eyes with a UCVA of 20/20 or better for SMILE (80% for SMILE and 84.31% for F-LASIK).1 The SMILE group showed a tendency for delayed visual recovery, which was also seen in other studies.3 However, it is noteworthy to consider that 94.3% had 20/25 vision or better for the SMILE group compared to 94.7% of the F-LASIK group which did not achieve statistical significance. At 1 year, 82.9% of SMILE achieved 20/20 compared to 76.37% in the F-LASIK group. However, both groups achieved 100% of 20/25 vision or better.

Both SMILE and F-LASIK (54.3% and 55.3%) groups had a favorable tendency toward emmetropia at 1 month postoperatively onwards. SMILE-treated eyes were closer to emmetropia than the F-LASIK treated eyes at 3 months and 1 year postoperatively (54.3% vs 47.4%; 60% vs 50%). This is similar to the study of Vestergaard et al. In our study, no eyes lost more than one line of BSCVA for the SMILE group. These patients also maintained low residual errors of refraction. Other studies report eyes losing up to two lines. There was tendency for slight hyperopia seen at 1 day postoperatively with the SMILE group. Refraction stabilized starting 1 week onwards. The F-LASIK group showed near emmetropia starting at day 1 follow-up. Lin et al also showed similar results that found no significant differences in refraction diopters.

Since SMILE was just introduced in the Philippines in 2014, early outcomes might have been influenced by the learning curve of the refractive surgeons. Transient corneal edema and other factors may have contributed to the initial less than perfect vision of some eyes in the SMILE group. However, our results showed SMILE is a safe and effective alternative procedure for the correction of moderate myopia and astigmatism. Larger sample size, prospective randomized study design and long-term follow-ups will provide better assessment of the safety, efficacy, stability and refractive predictability of SMILE.

SMILE was comparable to F-LASIK in terms of visual outcomes (efficacy, refractive predictability, stability) and safety for the treatment of myopia and astigmatism. However, a slight delay in visual improvement during the first week was observed in the SMILE group.