Disclaimer: The authors report no conflict of interests.

Understanding the anatomy of the eyelids and  upper face helps provide information on their  functions and roles in one’s appearance. The eyebrows,  eyelid crease, and pretarsal skin are among the facial  features that play important roles in facial appearance  and ethnic identification.1 It is well known that these  facial features vary with race, age, and sex.2-12

The upper eyelid skin crease is created by  attachments of the posterior layer of the levator  aponeurosis into the orbicularis muscle and sub cutaneous tissue.13 Among Whites, the eyelid skin  crease varies in height and tends to lie 8 to 11 mm  above the eyelid margin centrally in males and 6 to  9 mm above the eyelid margin centrally in females.14 Eyebrow position is also different between males  and females. The eyebrows tend to be heavier, flatter,  and higher in males whereas they are more arched  in females. Although, there are inter-individual  variations.1

Several published studies have reported the  anthropometrics of the eyelid crease height, visible  pretarsal skin, and eyebrow height among various  races.2-3,5-12 Caucasians have smaller pretarsal skin  and eyelid crease height than African-Americans  while Malays have larger pretarsal skin and eyebrow  height than Whites.3,5 Filipinos have a diverse  ethno-linguistic background with roots dating back  to pre-Hispanic Austronesian expansion before  colonization of the Spaniards and Americans.15 Furthermore, Filipinos are known to have Hispanic,  Latino, Native-American, and Chinese ancestries.16 To date, there are no studies published on eyebrow  and eyelid measure­ments among Filipinos. Thus, our  study aimed to determine normative measurements  for upper eyelid and eyebrow dimensions among  adult Filipinos and compare these measurements  between sexes and age groups. Improving appearance  while maintaining ethnic characteristics is one of  the keys to a successful oculoplastic surgery. These  measurements may serve as guides to ophthalmologists  and oculoplastic surgeons in surgical planning and  decision-making.

This was a prospective, descriptive study conducted  at the Eye Training and Facilities Center – Outpatient Department of Rizal Medical Center from May 1,  2019 to January 30, 2020 after approval from the  Rizal Medical Center-Institutional Review Board. The  minimum required sample size was 74 patients, based  on the 1994 study by Cartwright, using a standard  deviation of 4.4, confidence level of 95% and margin  of error of 1%.2 We included patients aged 20 years old and above since upper eyelid and eyebrow dimensions  are affected by sexual maturation that usually ends  by the age of 19 years.17 Patients with deformities or  malposition of the eyelid and ocular adnexae from  various reasons (i.e. congenital anomalies, periocular  and eyelid trauma, severe dermatochalasis, tumors,  inflammatory disorders, previous ocular or orbital  surgery), history or current use of topical anti glaucoma eyedrops, soft or rigid contact lens wear,  strabismus, or eyebrow tattoo were excluded from the  study.

A total of 75 patients were screened and recruited  in this study. A convenience type of non-probability  sampling wherein consecutive patients that met the  inclusion and exclusion criteria were recruited.

Written consent were obtained and participants  were categorized into 4 age groups: early (20 to 34  years); early middle (35 to 44 years); late middle  (45 to 64 years); and late (65 years and above). Data  collected include age, sex, and measurements of the  pretarsal skin height, eyelid crease height and of the  eyebrow height.

Measurements of the pretarsal skin height (PSH), eyelid crease height (ECH), and eyebrow height (EBH) were taken by a single examiner, along the vertical projections of the pupillary axis in a well-lighted room. The study participant was seated at the same eye level as the examiner with the study participant looking straight ahead. Without manipulation of the eyelid and with the eyes open, PSH was measured as the distance from the visible upper eyelid lash line to the eyelid skin fold. EBH was measured in primary gaze as the distance between the upper eyelid lash line and the first row of mature eyebrow hairs at the inferior eyebrow margin (Figure 1). With the eyes gently closed, ECH was measured from the upper eyelid lash line to the eyelid crease (Figure 2). The first row of mature eyebrow hairs was determined using a dermatoscope. All measurements were done to the nearest 0.1 millimeter (mm) using a vertically held metric ruler. Three measurements were taken for each parameter in each eye and the average was recorded. The results from each individual’s two eyes were averaged as well, and the average was used as the representative measurement. 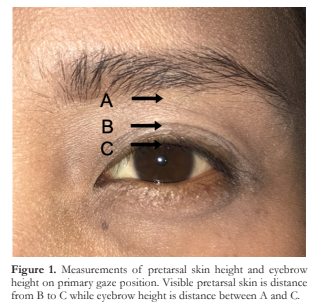 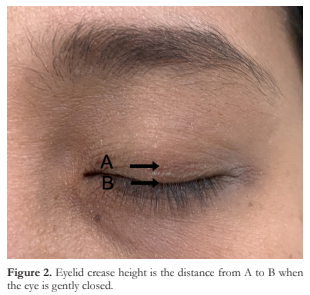 The measurements of PSH, ECH, and EBH  were expressed in terms of mean and standard  deviation (SD). An inter-eye correlation coefficient  was calculated to determine the closeness of  relationship of measurements between eyes.  All measurements were compared across age  groups using Analysis of Variance (ANOVA) and  between sexes using t-test. All statistical analyses  were performed using Medical statistical software  version 18.11. A p-value of <0.05 was considered  significant.

Overall, mean PSH was 4.5 ± 1.5 mm. Although  men have higher mean PSH than females across all  age groups, differences between the two sexes were  not statistically significant (p=0.05). There were no  statistical differences among the different age groups  as well (Table 2). 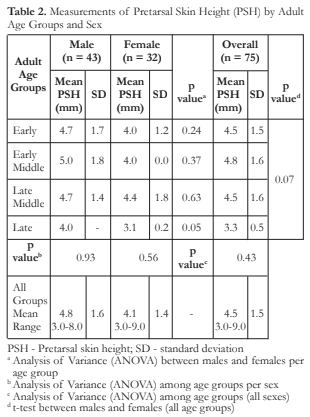 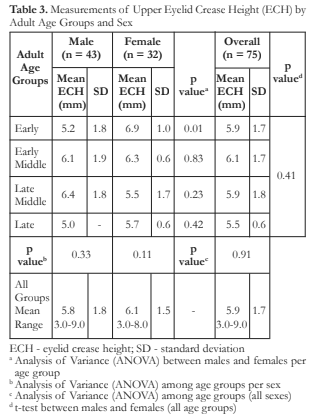 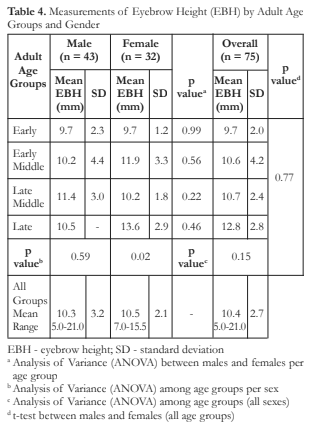 Table 5 shows very high degree of concordance  between right and left eyes in the three eyelid  measurements, with inter-eye correlation coefficients  ranging from 0.94 to 1.00. 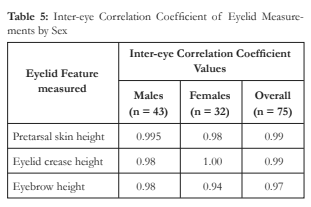 Surgical correction and reconstruction of the  upper eyelids and eyebrow require knowledge of  normal anatomy and its important landmarks.2,3 PSH,  ECH, and EH are among the features that provide a significant impact to one’s facial appearance. There  are several published race-specific studies on these 3  parameters involving Caucasians, African-Americans, Indians, Malays, and Chinese as summarized in Table 6.2,3,5-12 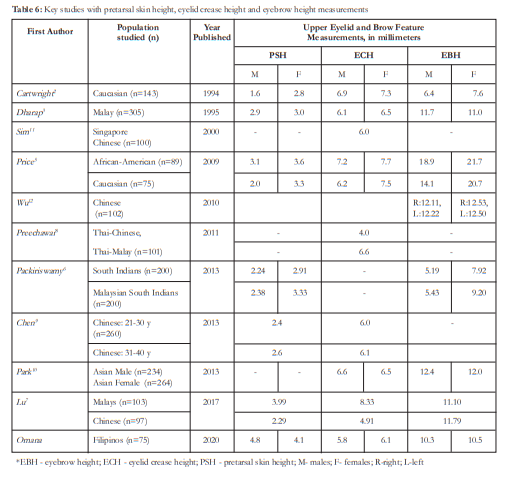 Our study findings show that the mean PSH of all  study participants was 4.5 mm. Our overall mean PSH  is higher compared to studies involving Caucasians,  African-Americans, Malays, Chinese and South  Indians.2,3,5,6,12 On the other hand, the mean ECH was  5.9 mm. ECH values in our study group were similar  to multiple studies involving Asians3,8,10 However, our measurements were lower compared to Caucasians.2,5 It is widely known that Asians have lower insertion of  the levator aponeurosis to the orbicularis muscle than  Caucasians which explains for the lower ECH values  in our study.2,3 Lastly, the mean EBH in our study  was 10.4 mm. Our measurements were very close  to values reported by studies involving Asians.3,7,10,12 EBH measurements had the largest standard deviation  compared to PSH and ECH values similar to the  study by Dharap et al.3 This may be attributed to  the difficulty in determining the exact upper limit or  lowest row of mature eyelashes, especially in females  who pluck their eyebrow hairs.2,3

The Effect of Sex

Our study demonstrated no significant differences  in the means of PSH between sexes. This is contrary to other studies that showed higher PSH in females  than males.2,3,5-7 Our smaller sample size may account  for the differences in study findings.

On the other hand, our study findings showed  that mean ECH among females in the early adulthood  age group was significantly higher than the mean  ECH among males belonging to the same age group.  This is in agreement with the study by Lu et al. involving Chinese participants.7 Conflicting results  were reported among Caucasians.2,5

The Effect of Age

Our study failed to show any effect of age on  PSH and ECH. Although a few studies have reported  increasing PSH with age, the same relationship  was not observed in this study.2,3 Furthermore, the  age-related increases in ECH and PSH are usually  proportional and these contribute to symmetry of the  upper eyelids.2,3

Our study findings demonstrate that EBH  increased with age among females subjects (p = 0.016).  This was also reported among Malays and African Americans.3,5 On the other hand, Cartwright et al. found no relationship between EBH and age among  Caucasians.2 Variations in the technique in measuring  EBH may partially account for these differences. Our  study used the same technique in measuring EBH with  Dharap et al. which was different from Cartwright et al.2,3

An increase in EBH with age was mainly  attributed to tonic frontalis contraction associated  with aging, preventing the lowering of the eyebrow  even in relaxation.18,19 The frontalis muscle only acts  on approximately the medial two-thirds of the eyebrow.  The lateral third of the eyebrow is not affected by the  muscle activity and is expected to sag with age.20-21

In this study, there was some difficulty in taking  measurements among females subjects who had non surgically altered or enhanced their eyebrows. Thus,  considering this factor along with the patient’s age  and sex, oculoplastic surgeons should be meticulous  in planning any eyebrow procedures since an  over-elevation creates a surprised look and aged  appearance.5

Limitations of this study included the small  sample size and lack of representations from other  regions of the Philippines. Our institution caters  to residents of Metro Manila and Calabarzon.  Our findings are also only applicable to the age  groups included in the study. For future studies, we  recommend including the younger age groups and  representatives from other regions of the country for  a more varied and comprehensive data analysis that  will better represent the Filipino population.

In summary, Filipino participants included in  our study have higher mean PSH compared to  Caucasians and African-Americans while ECH and  EBH values were similar with Chinese, Malay, and Thais. No sex-related differences were identified  in both PSH and EBH. While females in early  adult age have higher ECH than their counterpart  males. Significant age effect was only seen in EBH  measurements among our female subjects.

The authors would like to acknowlege Dr. Franklin P. Kleiner and Ms. Jo-Ann I. Bautista for their assistance in manuscript writing and proof-reading, and Mr. Reginald Arimando for his help in the statistical analysis.