Epidemiology of Eyelid Trauma Among Filipino Patients in a Tertiary Hospital

Disclaimer: The authors report no conflicts of interest.

Eye-related injuries and trauma are significant health problems in different parts of the world. Although the eyes represent only 0.1% of the total body surface and only 0.27% of the anterior body surface, their significance to individuals and society is disproportionally higher as most of the information reaches humans through vision. Those affected often have to face loss of career opportunities, major lifestyle changes, and occasionally, permanent physical disfigurement.1

In the United States, ocular trauma is the second most common cause of visual impairment. More than 2.5 million eye injuries occur and 50,000 people permanently lose part or all of their vision each year.2 Some studies have shown that males especially those between the ages of 12 and 46 exhibited a greater vulnerability for eye trauma.2,3 Though nearly half of all reported injuries happened in the home, 14.7% of reported injuries were sports-related, 15.6% occurred at work, and 11.4% on the road usually in relation to motor vehicle accidents. Initial symptoms included pain, foreign body sensation, decreased vision, eye redness, or corneal opacities. The most common eye injuries often involved the eyelids and the anterior chamber. These included minor scrapes, abrasions, cuts, and lacerations.2

Tabatabaei et al. defined lid laceration as any trauma to the external surface of the lids with or without evident loss of tissue or other ocular comorbidities.3 In their study, eyelid injuries were acquired more often in the streets and caused by projectile objects that hit the eye due to accidents or assault.3 The right eye and the upper lid were the most common sites of these injuries. On the other hand, severity and comorbidities associated with eye lid laceration were noted in the study of Herzum et al. 4 Lid margin involvement was observed in 23% while 15% had injuries to the lacrimal drainage system. Surgical interventions ranged from simple skin suturing to repair of the skin and subcutaneous tissue including the orbicularis and levator muscle, lid margin and canalicular system repair.4 The visual outcomes were correlated with severity of the injury defined by the presence of associated open globe injuries.3

In the Philippines, eye injuries and trauma are also significant causes in those who reported visual loss in one or both eyes. In the Philippine General Hospital – Department of Ophthalmology and Visual Sciences (PGH-DOVS), among the 72,074 service consultations from January 1996 to June 1997, ocular trauma accounted for 4.8% with an average of 386 cases per month.5 Similar to the US data, there was male preponderance. Most of the patients were also below 40 years old with a range of 1-87 and a mean age of 27 years. Most of these ocular injuries occurred at home. The most common mechanism was blunt injury. Accidents accounted for almost half of these eye injuries and were associated with severe ocular co-morbidities like corneo-scleral lacerations, lid lacerations, and blunt injuries to the globe. Among the 3,484 patients included in the study, 58.3% had lid trauma in the form of contusion, hematoma, or laceration.5 The frequent involvement of the eyelids showed how they play an essential role in protecting the eye from ocular trauma, maintaining the ocular surface, and preserving the vision.6

PGH, one of the largest tertiary referral centers in the country, receives an average of 13,000 ophthalmologic consults per year. While eyelid injuries account for only 1% of these consults, it is one of the top 10 reasons for emergency admission, extended hospitalization, and surgical intervention of ophthalmologic patients (PGH-DOVS Accomplishment Reports, unpublished data, January 2012 – June 2015).

Prevention of eyelid injuries poses as a public health concern as these injuries can result in infection, pain, discomfort, lost wages, and unexpected health care expenses. In addition to the physical and psychological costs of eyelid injuries to the individual, the direct and indirect financial costs to society are often significant.7 Currently, there are limited local studies that focused on eyelid injuries in the Philippines. A comprehensive knowledge of the epidemiology and patterns of eyelid injuries including the identification of target population, laterality and area involved, comorbidities and visual outcome, mechanism of injury and most common injurious agents, risk factors and predisposing conditions can assist in understanding the nature of these injuries. It is the purpose of this study to provide sound epidemiologic data on eyelid injuries which can hopefully help establish costeffective, well-planned preventive measures.

This was a retrospective, cross-sectional, descriptive, single-center study. Medical charts of patients with eyelid injuries evaluated at the Emergency or Out-Patient Clinic of the PGH-DOVS from June 2014 to June 2015 were reviewed. Medical records of patients diagnosed with eyelid injuries at the time of initial consult were included in the study. Eyelid injury was defined as trauma to the external surface of the lids regardless of extent that resulted to skin breaks with or without tissue loss or other ocular comorbidities. Medical records of patients diagnosed with eyelid injuries but had incomplete history and data were excluded from the study. The following information was collected: demographic data of the patient, information related to the injury such as the offending object, mechanism, place, date and time of injury, date and time of consult, possible risk factors and predisposing conditions such as alcohol intoxication and lack of use of protective gears. Other ocular morbidities associated with the eyelid injuries (i.e. marginal, canalicular, or globe involvement) and the type of surgical procedures done were also noted.

This study was conducted with the approval from the University of the Philippines Manila Ethics Research Board (UPMREB).

A total of 106 patients diagnosed with lid laceration was seen during the defined time period. Of the 106 medicals records requested for retrieval, only 85 charts were in file. Of the 85 cases, 78% were males.

Most of the patients were below 50 years of age with a range of 1-79 and a mean of 25 years old. A bar graph on the age and sex distributions show male preponderance across all age groups except in the pediatric group of less than 10 years old (Figure 1).

All eyelid injuries were unilateral and majority (58%) involved the right side. The specific areas affected were variable among patients. Some sustained injury to the upper or lower eyelid only, while others involved both upper and lower eyelids. The most commonly affected area was the right lower lid as seen in 36 cases (42%), followed by the right upper lid seen in 27 (32%), left upper lid in 25 (29%) and left lower lid in 24 (28%) (Figure 2). 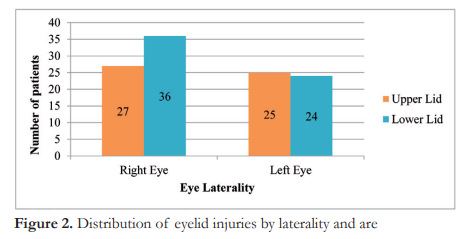 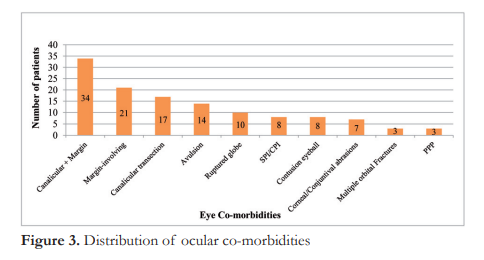 Subgroup analysis showed that children aged 10 years and below have the highest proportions of margin-involving and lacrimal drainage injuries compared to the other age groups (Figure 4). The presence of these complications and co-morbidities were the main reasons for extended hospitalization for surgical repair and medical management. 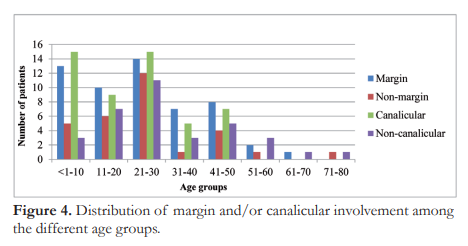 Majority of the injuries were accidental in nature (36%). Eyelid injuries from assault, vehicular crash, work, and animal bites accounted for 27, 21, 12 and 4%, respectively. Subgroup analysis showed that eyelid injuries in the pediatric age group were mostly accidental (Figure 5). 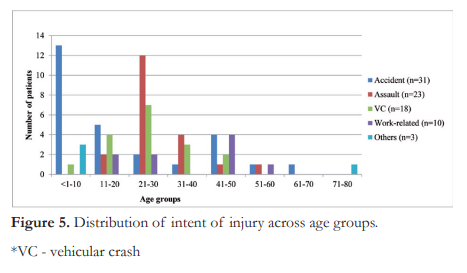 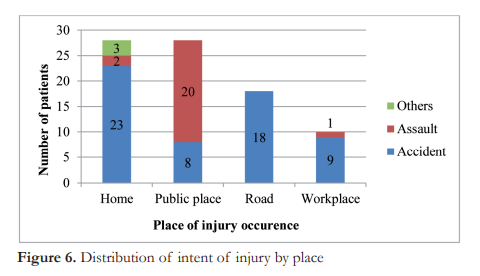 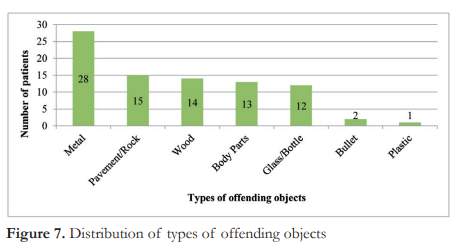 Accidents were mostly preventable especially those that occured on the road or at the workplace as some behaviors and risk factors could be identified and properly addressed. Of the 18 cases of vehicular crash involving motorcycles, 89% of the patients were not wearing helmets at the time of the incident. While all work-related injuries reported absence of protective head gear during work. Alcohol intoxication was reported in 30 and 72% of assault and vehicular crash injuries, respectively (Table 2).

Our study findings are consistent with inter national and local reports on ocular traumas and  eyelid injuries. Most of the patients in our study are  young males with a mean age of 25 years old which  was similar to the studies by Tuaño and Tabatabaei  et al. where mean ages of patients were 27 and 29  years, respectively.3,5

Intent, mechanism of injury, and offending  objects were also consistent with published literature.  Accidents remained the most common cause of  eyelid injuries, followed by assault. The most common  offending objects were metal, wood and glass. The  mechanism of injury by which these objects caused  trauma was either by blunt force or sharp injuries.  These factors were consistent with the report of Tuaño, who investigated all cases of ocular trauma  back in 1998.5

Previous reports which mostly investigated  cases in the 1990s found the work place as the most  common location where ocular trauma occurred.4 However, similar to a study done in Iran in 2013,  we found that eyelid injuries more often occurred  in public places and at home. This shift may be due  to improved safety standards in the workplace in  recent years. Furthermore, accidents at home remain  unexpected since the home is often considered a  place of relaxation and familiarity, which can lead  to decreased cautious behavior as compared to the  workplace where risks are often anticipated, and  work-related injuries are consciously avoided.

Eyelid injuries in young children were mostly  accidental and were frequently associated with margin  and lacrimal system involvement requiring hospital  admission and surgical repair under general anesthesia. Majority of the injuries among this age group occurred  at home. The homes may not have been designed,  constructed or furnished to avoid such incidents.  Many parents are unaware of the potential dangers  in their house until an injury occurs. The need for  caregivers’ increased vigilance and knowledge about  childproofing at home should then be emphasized.

Among young adults, the risk factors for motor  accidents and assault include increased risky behavior,  tendency for violence, exposure to various hazardous  environments, line of work, and sports.

In the studies by Tabatabaei et al. and Herzum et al., the upper eyelid was reported as the most  common area affected in eyelid injuries.3,4 In contrast,  our study noted the lower lid of the right eye to be  the most common part involved. We also report a  relatively higher association of involvement of the  margin and/or lacrimal drainage system compared to  the study by Herzum.4 On the contrary, we report a  smaller proportion of globe involvement compared  to the study by Herzum et al.4 However, we observed  more severe globe injuries, where 72% were penetrating injuries. These led to poor visual outcomes of 20/200  or less in all penetrating injuries and ruptured globe cases. This may be due to a selection bias wherein  complicated cases are more often referred to tertiary  hospitals for further intervention.

Our study findings showed increase in injuries  related to vehicular crash similar to an Iranian study.  The Philippines and Iran are developing countries  with low socio-economic status. Compared to four wheeled vehicles, motorbikes are more affordable and  a more convenient mode of transportation, hence its  increased presence on the road within the past few years. Poor implementation of traffic regulations  and inadequate public information fail to discourage  driving under the influence of alcohol and lack of  protective gear making these drivers vulnerable to  accidents and injuries on the road.

In conclusion, eyelid injuries continue to pose as  a public health concern. Young males remain most  vulnerable to ocular trauma including eyelid injuries.  Public safety campaigns on the use of protective gear  and eyewear while driving or working in hazardous  environments should be emphasized. Republic Act  10586 or the Anti-Drunk and Drugged Driving Act  of 2013 should also be strictly enforced. At home,  the practice of childproofing can be introduced to  parents and caregivers to avoid accidents involving  the very young.