RETINOPATHY of prematurity (ROP) is a potentially avoidable cause of blindness in children. The rate of
blindness from ROP varies greatly among nations, being influenced both by levels of neonatal care (in terms of
availability, access, neonatal outcomes) and by the availability of effective screening and treatment programs.
The population of infants who are at risk for blinding ROP has decreased over time in developed countries. In
developing countries, such as those in Latin America and Eastern Europe, ROP is emerging as a major cause of
blindess and has been referred to as the “third epidemic.” In most of sub-Saharan Africa and Asia, blindness from ROP is undetermined and under-reported, except for South Africa where ROP accounted for 11% of blindness in children.1 The importance of ROP screening has dramatically increased in recent years as clinical studies have shown improved visual outcomes in infants with severe ROP after treatment with either transscleral cryotherapy or transpupillary laser therapy.2-3 As far back as 1995, the Royal College of Ophthalmologists British Association of Perinatal Medicine recommended that the first eye examination should take place between 6 and 7 weeks of chronological age in infants deemed at risk for ROP, and
that infants with birth weight of less than 1,500 grams and gestational age of 31 weeks or less should be screened.4 In 1997, a joint statement of the American Academy of Pediatrics, the American Association for Pediatric Ophthalmology and Strabismus, and the American Academy of Ophthalmology recommended that infants weighing 1,500 grams or less or gestational age at 28 weeks or less at birth, including those more than 1,500 grams with an unstable clinical course felt to be at high risk by their attending pediatrician or neonatologist, should have a dilated indirect ophthalmoscopic examination to screen for ROP.5 This examination should be performed between 4 and 6 weeks of chronological age or between 31 and 33
weeks of postconceptional age. As more long-term ROP outcomes became known, modifications were made in the recommendations.6 The Early Treatment for Retinopathy of Prematurity (ETROP) cooperative group also formulated indications for treatment of ROP, based on the results of the ETROP randomized trial. This study showed that it is possible to identify characteristics of ROP that would predict which eyes are most likely to benefit from early peripheral retinal ablation. A clinical algorithm was developed to identify eyes with prethreshold ROP that were at highest risk for retinal detachment and blindness while minimizing treatment of prethreshold eyes likely to show spontaneous regression of ROP. The clinical algorithm showed that in most circumstances, peripheral retinal ablation should be considered for any eye with type 1 ROP: zone 1, with any stage ROP and plus disease; zone 1, with stage 3 ROP with or without plus disease; and zone 3, with stage 2 or 3 ROP with plus disease. It also indicated that continued serial examinations as opposed to peripheral retinal ablation should be considered for any eye with type 2 ROP: zone 1, with stage 1 or 2 ROP without plus disease; or zone 2, with stage 3 ROP without plus disease. Treatment should be considered for an eye with type 2 ROP when progression to type 1 status or threshold ROP occurred.7 The Department of Ophthalmology of Jose R. Reyes Memorial Medical Center (JRRMMC) has been conducting ROP screening for years. The old protocol was based on the American screening guidelines5 and revised in 2007.

The JRRMMC protocol focused on the pediatrician’s role in the identification, screening, management, and follow-up of infants diagnosed with or at risk for developing ROP. This protocol emphasized the roles of the neonatologist and nursery personnel, in addition to the ophthalmologists, in the conduct of the ROP screening and answered who, when, and whom to refer infants deemed at risk of ROP. The Philippine ROP screening protocol8 recommended that the first examination should be performed at a minimum chronological age of 4 weeks or within the 31st to 33rd weeks postconceptional age whichever came later. The JRRMMC ROP Screening Protocol adopted a similar time period for the first examination with the option, however, of whichever came earlier, in an attempt to catch ROP cases earlier and in less than severe stages. The definition of severe ROP in this study referred to cases that warranted laser or surgical intervention, and included AP-ROP, threshold ROP, prethreshold type I, and those with subtotal or total detachment. The initial examination of infants screened for ROP was very important as it dictated how soon positive cases should follow up and if laser treatment was necessary. Considering the limited resources of the hospital in terms of laser treatment, and the time consuming need for regular follow-up, most of the cases were seen only initially, illustrating the importance of the initial examination. This study determined the prevalence of ROP on initial examination among infants screened for ROP at a tertiary hospital using the existing JRRMMC ROP screening protocol. It also determined the severity of ROP on initial examination and identified the possible associated factors among positive cases.

METHODOLOGY
Medical records of infants screened for ROP from January 2007 to August 2009 were reviewed. Results of the
initial examination were collated and analyzed. The examination procedure was in accordance with the
Retinopathy of Prematurity (ROP) Screening Protocol of Jose R. Reyes Memorial Medical Center. Included were infants  with birth weights of less than or equal to 1,500 grams, gestational age of 32 weeks or less, and selected infants with birth weights of 1,501 to 2,000 grams with an unstable clinical course who were assessed by the neonatologist to be at high risk, including those with prolonged oxygen exposure, difficulty
weaning off oxygen, hyaline membrane disease, cyanotic heart disease, anencephaly, sepsis, apnea of prematurity, blood transfusions, hypoxemia, hyperoxemia, hypocarbia, hypercarbia, maternal bleeding, mask
or bag ventilation, prolonged total parenteral nutrition, or exchange transfusions. All infants who fitted the inclusion criteria and who had been determined by the neonatologist to be medically stable to undergo pupillary dilatation and a careful funduscopic examination by indirect ophthalmoscopy with scleral depression were referred for examination on the 4th to 6th weeks of chronological age or 31 to 33 weeks postconceptional age, whichever was earlier. Those referred were examined only if informed consent was secured from the parents. Cases referred were examined by a certified pediatric ophthalmologist experienced in examining preterm retinas. Findings of the examination were recorded on an ROP chart noting whether or not plus disease was present and the ROP stage with its corresponding location by zones and clock-hours in accordance with the International Classification of Retinopathy of Prematurity (ICROP) 2005.9 The ROP chart contained the date of examination, patient’s name, gender, birthdate, gestational age at birth, postnatal age, postconceptional age, birth weight, and other risk factors such as prolonged oxygen exposure, difficulty weaning off oxygen, hyaline membrane disease, cyanotic heart disease, anencephaly, sepsis, hypoxemia, hyperoxemia, hypocarbia, hypercarbia, maternal bleeding, mask or bag ventilation. A sole investigator reviewed the charts and noted the aforementioned variables, along with whether blood or blood products were transfused, and whether phototherapy was instituted. Oxygen exposure was noted by counting the number of days of exposure regardless of route of delivery whether by nasal cannula, hood, CPAP, ambubag, or mechanical ventilation. An impression was made in accordance with ICROP and the corresponding plan and follow-up positive for ROP. Of these, 14 (12.5%) eyes of 8 infants had severe ROP warranting laser or surgical
intervention. Sixty-nine (61.60%) eyes of 35 infants had immature retina while 22 (19.64%) eyes of 11 infants
had mature retina. The mean gestational age in weeks by last menstrual period (LMP) and by Ballard Scoring
(BS) and the mean birth weight in grams are shown in Table 1. Of the total number of cases seen, the mean gestational age in weeks was 31 5/7 by LMP and 32 4/7 by BS, with mean birth weight of 1,508 grams. Of 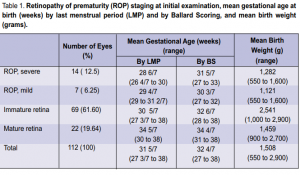 date indicated on the ROP chart. This study took note of findings on initial examination and subsequent examinations if warranted until the conclusion of the acute retinal screening. The retinal screening was deemed
concluded if any of the following occurred: retinal vascularization up to zone 3 without zone 1 or 2 ROP, full
retinal vascularization, postmenstrual age of 45 weeks and no prethreshold disease or regression of ROP.10 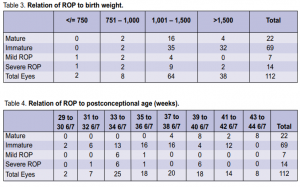 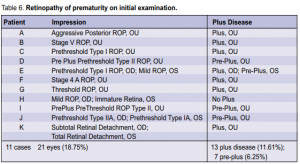 DISCUSSION
The JRRMMC ROP protocol was
able to detect 21(18.75%) eyes of 11
infants positive for ROP. Fourteen
(12.5%) eyes of 8 infants had severe
ROP warranting laser or surgical
interventions, showing that more than
half of the positive cases upon initial
examination were severe enough to
warrant immediate treatment. The
most severe stage present was stage 5 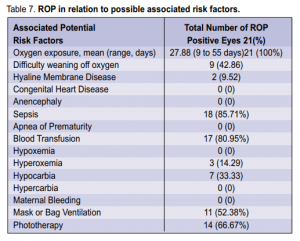 in 3 (2.68%) eyes. All positive cases had gestational age under 32 weeks by both last menstrual period (LMP) and Ballard Scoring (BS). All but 2 (5.26%) cases positive for ROP had birthweight of less than 1,500 grams. Oxygen exposure, sepsis, and blood transfusion were the most common associated factors among positive cases. In conclusion, the findings of more than half of the positive cases warranting laser or surgical treatments on initial examination merits re-evaluation of screening recommendations and their timing.