Refractive errors in Filipino eyes in a single-center study population

ACCORDING to the World Health Organization’s (WHO) “Global Initiative for the Elimination of Avoidable
Blindness 2020” (Vision 2020), errors of refraction accounted for 18% of visual disability, next to cataract
(39%), and that “reversing or treating these refractive errors greatly decreased the number of subjects with visual disability”.1 Awareness of the frequency of refractive errors is, therefore, a crucial step in the Vision 2020’s goal of eliminating refractive-error-related visual disability. Locally, there are few published reports on the prevalence of refractive errors. We, therefore, determined the frequency of refractive errors in an ambulatory-care center and assessed the refractive status of patients using axial length measurements by optical interferometry2 and corneal power by automated keratometry. These were compared with the manifest refraction (retinoscopy) of the patients. We also correlated them with demographic and other ophthalmic variables, and compared refractive and keratometric astigmatism.

METHODOLOGY
This is a retrospective study involving 1,332 eyes of 666 consecutive patients who underwent refractive or cataract screening and optical biometry (IOL Master, Carl Zeiss Meditec, Jena, Germany) measurements from March to October 2008. Patients who could not physically undergo optical biometry or manifest refraction were excluded. The manifest refraction of each patient using the retinoscopy technique for best-corrected visual acuity was retrieved from the clinical record. The following data were obtained: age and gender, axial
length, manifest refraction, type of refractive error, corneal power, refractive (by manifest refraction) and keratometric astigmatism (by IOL Master), and axis of astigmatism (refractive and keratometric). Manifest refraction was measured using retinoscopy where sphere, cylinder (measured in negative cylinders), and axis were noted. Spherical equivalent (SE) was calculated as sphere plus half the cylinder power. Presence of anisometropia, defined as SE of >1D between the right and left eyes, was noted. The types of refractive errors were classified as follows: myopia with SE ≥ –0.50D, hyperopia with SE ≥ + 0.50D, and emmetropia with SE ± 0.25D. Eyes with and without astigmatism were noted. Astigmatism was defined as >0.50D measured in two ways: (1)Refractive – by the cylinder obtained in the retinoscopic manifest refraction (MR-astigmatism), and (2)
Keratometric – by calculating the difference between the steepest and flattest keratometric readings obtained by the IOL Master (IM-astigmatism). The axis of astigmatism was determined by manifest refraction (MR-axis) and by the axis of the flattest K as measured by the IOL Master (IM-axis). With-the-rule (WTR) astigmatism occured when the axis was at 0 ± 150 , against-the-rule (ATR) when the axis was at 90 ± 150 , oblique astigmatism (OA) when the axis was within 200 to 700 and 110 to 1600 . Data were stored in Excel (Microsoft Corp, Redmond WA, USA) and transferred to Statistical Package for the Social Sciences (SPSS) version 16 for statistical analyses. Descriptive statistics, bivariate correlation study (Spearman’s), parametric and nonparametric tests for independent samples were used to compare values depending on whether the distribution was Gaussian (t-test) or non-Gaussian (Mann-Whitney). The statistical level of significance was p < 0.05. 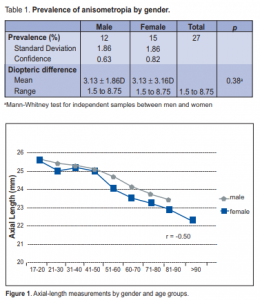 having a longer axial length. A statistically significant negative correlation (r = –0.50) between axial length and age was present; as the age increased, there was a decrease in measured axial length (Figure 1). This
correlation was similar for each gender group.

Mean Sphere
The mean sphere was –1.3D for the entire population(Table 2). There was a positive correlation between
spherical diopter and age(r = 0.57, p < 0.001); more plus spheres were frequent in the middle-aged and the
elderly (Figure 2). A similar correlation when matched for gender and age was present. Myopia was more frequent in the younger age group while hyperopia increased with age and became the predominant refractive error (50 to 75%) in the elderly group.

Mean Cylinder
The mean cylinder power was –0.81D for the entire population; –0.79D for males and –0.81D for females. The difference between the 2 groups was not significant(p = 0.56). However, there was a negative correlation between cylindrical power and age (r = –0.17; p < 0.001; Table 2) in the entire population; the cylinder
lessened among the middle aged group and then increased in the elderly group (Figure 3). This correlation remained when gender-specificage match was done (Table 2).

Flattest K
The mean flattest K was 43.5D for the entire population, 43.37D for males, and 43.67D for females. The
difference between the 2 groups was significant (p < 0.001), with females having a flatter keratometry reading.
Age also showed a positive correlation with K measurements higher with age (r = 0.10, p < 0.001) and significant 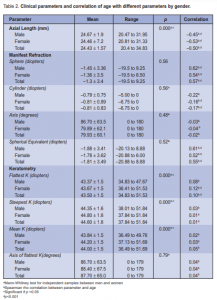 only in the female group (Table 2).

Refractive Astigmatism (MR-Astigmatism)
Eyes with astigmatism (> –0.50D) accounted for 47.88% of the total population with a mean cylinder of 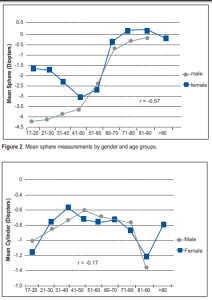 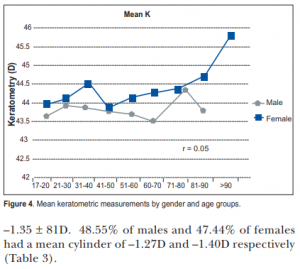 Refractive (MR-Astigmatism) vs. Keratometric (IM-Astigmatism)
There was a significant difference between the astigmatism measured by manifest refraction and the IOL
Master, where the keratometic astigmatism showed a higher astigmatism rate than the refractive astigmatism
(p < 0.001) (Table 3).

MR-Axis and IM-Axis
The refractive axis and the keratometric axis showed a significant difference between the two groups (p < 0.001) (Table 3).

Keratometric
The prevalent type of astigmatism measured by the IOL Master was WTR (59.1%), followed by ATR (20%), and
OA (20%). WTR astigmatism was the predominant type in the younger and middle-aged groups (20 to 60 years old), while ATR was more prevalent in the older age group (Figure 6). 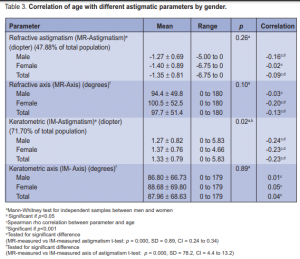 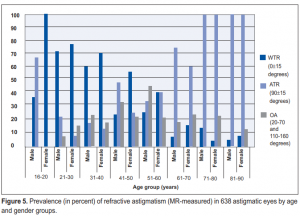 DISCUSSION
Anisometropia was observed in 13% of the patient population, 12% among males and 15% among
females. This finding was similar to population-based reports done in Japan (15.1%)3 and Australia (14%).4 Our rates were slightly lower than those reported in Singapore (20%)5 and Taiwan (19.9),6 while it was higher
compared to the rates reported in Mongolia (10.7%)7 and Bangladesh (11.9%).8 Myopia was noted to be the predominant refractive error type in this study. Similar to other East Asian population-based reports, which were done on a larger scale, myopia was also the leading type of refractive error, with rates at 31 to 40%.5-6, 9 Our smaller single- center population had a higher rate of myopia at 59% because patients specifically consulted for refractive or cataract screening, which created a bias toward higher degree of refractive errors. The crude frequency of hyperopia in this study was 30%, which was similar to those reported in Singapore (35.9%),5 Mongolia (32.9%),7 and Japan (27.9%).3 Age is one of the factors known to correlate with refractive errors. The age-related changes in the human optical system shift the refraction over time: a trend towards myopia during high school to college years, followed by a hyperopic shift in the elder years. Other changes are a shift from withthe-rule astigmatism to against-therule astigmatism and steepening of the corneal curvature with age.12 In this study, the younger population was more myopic, and as the age group increased the frequency of myopia decreased, illustrating a hyperopic shift with age. The reasons for this hyperopic shift are unknown.13 We also observed that shorter axial lengths were correlated with older age
groups. Others reported that corneal curvature flattens with age.3,12 In this study, only the flattest K (measured by the IOL Master) was correlated with age in the female group. Refractive astigmatism was
correlated with age; increased negative cylinders were seen in the older age group consistent with other
reports. 3, 4, 6-8,10 However, keratometric astigmatism showed an inverse correlation with age in this study, in
contrast to a previous report3 where astigmatic K was not correlated with age. The shift from with-the-rule astigmatism to against-the-rule 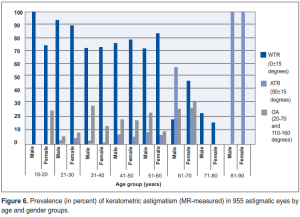 astigmatism with increasing age as demonstrated in this study is well corroborated in other studies. 3,12,14
Correlation of age with axis values was not statistically significant in this study in either the refractive or keratometric methods. There was no significant difference between gender groups in the manifest refraction measurements. Some studies15,16 reported that white females were significantly more myopic than white males. But other studies did not show any significant differences between the gender groups.3, 6 In this report, axial length and keratometric measurements were found to be significantly different between gender groups, similar to that reported in Japan.3 This study had several limitations: eye diseases such as corneal problems,
cataract, glaucoma, and retina that may affect the refractive status were not reported, including previous ophthalmic surgical interventions. Visual acuity was also excluded and vector analysis was not performed in
calculating the astigmatism. Nevertheless, the results of this study gave a picture of the types of refractive errors present in patients seeking eye care. A community based survey is needed, however, to obtain
a more representative sample of the refractive errors in the general population. In summary, the older population was characterized by shorter axial length and more prevalent hyperopia. Differences between the refractive and keratometric astigmatism indicate that other factors, such as lens changes or higher-order aberrations, may play a role in the astigmatic changes in the eye. The type of astigmatism changes with age where against-the-rule was more prevalent in the older age group.