Mature Bone in the Eye: A Case of Choroidal Osteoma

Calcifications in the eye may be present in the choroid and retinal pigment epithelium (RPE) and may be secondary to trauma, chronic inflammation and infection, hypercalcemia or hyperparathyroidism.1-4 Choroidal osteoma is a rare benign tumor of the choroid wherein the choroid is replaced by mature bone. Around 65 patients with choroidal osteoma have been described in the literature compared to 12,000 cases with uveal melanoma.1,5-7 Because of the rarity and the variable course of the disease, present understanding of this entity remains limited and long-term management a challenge.

A 49 year-old female presented with a 3-year gradual progressive blurring of vision of the left eye. She sought consult with a local ophthalmologist who described her to have bilateral yellow subretinal patches. Fundus fluorescein angiogram (FFA) was done with unrecalled findings. Systemic work-up revealed normal chest x-ray, mammogram, cranial CT scan, peripheral blood smear, bone marrow biopsy, liver and kidney profile, except for a 15mm induration on purified protein derivative (PPD) skin test. She was assessed to have TB choroidopathy and was given isoniazid, rifampicin, and pyrazinamide for 6 months. Due to non-improvement in vision, she sought consult with a second ophthalmologist. Review of systems and past medical and ocular history were unremarkable.

She had visual acuity of 20/25 in the right eye and hand movement on the left. Bilateral anterior segment exam was normal. Dilated fundus exam revealed bilateral yellow, elevated, large subretinal patches located on the peripapillary area and extending towards the macula with scalloped margins (Figure 1). 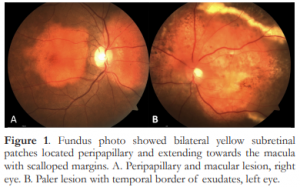 The lesion in the left eye appeared more pale yellow with a temporal border of dense exudates. The vitreous, disc, retinal vessels, and retinal periphery were unremarkable in both eyes. The following were initially considered: (1) bilateral choroidal mass, (2) rule out bilateral TB choroidopathy, and (3) consider secondary cystoid macular edema (CME) in the left eye. 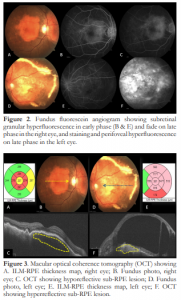 T-spot TB test to confirm extrapulmonary tuberculosis was negative. She was finally assessed to have bilateral benign choroidal mass, most likely a choroidal osteoma, with secondary cystoid macular edema in the left eye. 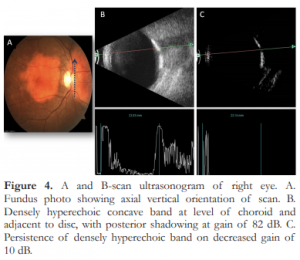 Figure 4. A and B-scan ultrasonogram of right eye. A. Fundus photo showing axial vertical orientation of scan. B. Densely hyperechoic concave band at level of choroid and adjacent to disc, with posterior shadowing at gain of 82 dB. C. Persistence of densely hyperechoic band on decreased gain of 10 dB. 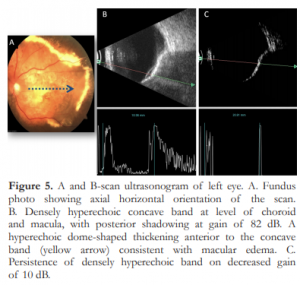 Figure 5. A and B-scan ultrasonogram of left eye. A. Fundus photo showing axial horizontal orientation of the scan. B. Densely hyperechoic concave band at level of choroid and macula, with posterior shadowing at gain of 82 dB. A hyperechoic dome-shaped thickening anterior to the concave band (yellow arrow) consistent with macular edema. C. Persistence of densely hyperechoic band on decreased gain of 10 dB.

Choroidal osteoma is a benign tumor of the choroid composed of mature bone. Some authors considered it as a choristoma because of its onset in healthy young adults, its tissue composition, absence of preceding ocular disease, and its peripapillary location.1,4 It is usually seen in young healthy females with no racial or genetic predilection; although there were reports of males and patients in their 4th decade with choroidal osteoma. It has a wide spectrum of presentation from mild to severe blurring of vision with metamorphopsia and/or significant visual field defects. Anterior segment exam is normal.1,5-7

Although it presented more commonly (75%) as a unilateral lesion, cases of bilateral choroidal osteoma have been described. It is always located peripapillary or juxtapapillary, and may extend into the macula. It is yellow-white to orange-red, slightly elevated (0.5 to 2.5mm), unifocal, large oval or round subretinal lesion with well-defined scalloped or pseudopodial margins. Overlying spider-like vessels may be seen. Overlying retina, vitreous, and optic disc remain unaffected.5,8

In choroidal osteoma, normal choroid is replaced by mature bone with bone marrow spaces filled with connective tissue and vessels. Choriocapillaries appear narrowed or obliterated while choroidal melanocytes are displaced outwards the sclera. RPE appears focally depigmented and flat while overlying neurosensory retina becomes thinned.9,10 FFA shows early granular hyperfluorescence and may present with late diffuse staining. The yellow-orange portions, similar to our patient’s right eye, show minimal choroidal hyperfluorescence while yellow-white portions, like our patient’s left eye, exhibit early diffuse hyperfluorescence on FFA. Subretinal choroidal neovascularization (CNV), not present in our patient, appear as early lacy hyperfluorescence surrounded with late staining.4,5 Indocyanine green angiography shows early hypofluorescence due to the thick osteoma with late tumor staining.11,12 B-scan ultrasound shows slightly elevated densely hyperechoic concave choroidal mass with prominent posterior shadowing or a “pseudooptic nerve”. It has high intensity echoes on its inner surface but has decreased amplitude posterior to the tumor.4 Its internal structure is difficult to evaluate on macular OCT. RPE may appear to be contiguous with the inner surface of the tumor. The degree of calcification affects the amount of light transmission; hence, calcified areas appear hyporeflective, like in our patient’s right eye. On the other hand, decalcified portions appear hyperreflective similar to our patient’s left eye. Macular OCT may also show intraretinal edema, retinal thinning, loss of photoreceptors, subretinal fluid, and CNV, if present.13 It appears as a densely radio-opaque structure that is similar to bone on CT scan and x-ray which enhances with contrast on magnetic resonance imaging.14,15

This disease has frequently been misdiagnosed in earlier literature. Differential diagnoses of yellow subretinal lesions included idiopathic sclerochoroidal calfication, amelanotic choroidal melanoma, amelanotic choroidal nevus, metastatic choroidal carcinoma, and choroidal hemangioma. However, its distinct clinical and ultrasonographic presentation aids in the diagnosis. The first attending ophthalmologist considered TB choroidopathy because of the positive PPD test and a tuberculoma that might mimic a tumor and present posteriorly. However, points against TB choroidopathy included a negative T-spot test, non-improvement of vision after anti-TB treatment, and the absence of the following findings: multifocal choroidal tubercles on dilated fundus exam, perilesional hyperfluorescence on FFA, and mildly hyperechoic heterogenous solid presentation on B-scan.16

At presentation, 51% were slowly growing, 46% showed decalcification, while 31% showed subretinal fluid or hemorrhage due to CNV.5,7,17-19 The slow growers showed slight enlargement in basal dimensions over months to years. A report showed tumor growth in 41% of 22 cases in 10 years.5,7 The decalcified group showed yellow-white lesion with poor visual acuity, similar to our patient’s left eye. There was thinning and depigmentation overlying the RPE, with loss of photoreceptors. It occured slowly and occupied 40% of the tumor by 10 years. It resolved spontaneously or after treatment.17,19,20 Those presenting with CNV have gray-green subretinal neovascular tissue with serous subretinal fluid or hemorrhage secondary to breaks from the thinned and degenerated RPE-Bruch’s complex. CNV presented in 31% in 5 years, 47% in 10 years, and 56% by 20 years. It tends to occur near the fovea and progresses towards the foveola and must be distinguished from branching vascular tufts.5,7,19,21

There is no treatment for altering the growth of the osteoma. For management of CNV, there are various effective treatment modalities but preserving long term vision has been challenge.7,22,23 Trans-pupillary thermotherapy has been shown to effectively obstruct growth of CNV with complete resolution as early as 6 months. However, it has poor visual outcome due to scarring of CNV.24,25 Although photocoagulation stimulates rapid vascular remodeling in 18%, it has no role in subfoveal CNV, and can cause retina-osteoma venous and arterial anastomoses in 9%. It also requires multiple treatments due to difficulty in closing new vessels due to lack of melanin and thinned RPE.7,24,26 Photodynamic therapy (PDT) reduces the size of CNV with reports describing complete resolution in 6 months after a single session. However, final vision remains variable, requiring multiple sessions and CNV may recur because of choroidal ischemia.27-30 Injection of anti-vascular endothelial growth factor (VEGF) has been shown to be effective with resolution of subretinal fluid in as early as 8 days. Unfortunately, it also requires multiple treatments.31-33 At present, combination treatment appears to be the best available modality of management. Anti-VEGF addresses the upregulation of VEGF and platelet endothelial derived actor (PEDF) seen after PDT. In a report by Jang, a patient had final VA of 20/20 in 2 months from 20/100 with resolution of subretinal hemorrhage from a combination of intravitreal bevacizumab and standard-fluence PDT.34 Morris et al described a patient with final vision of 20/20 in 4 weeks from 20/100 after intravitreal ranibizumab and low-fluence PDT.35

Blurring of vision due to choroidal osteoma is slow but progressive. The probability of visual loss, with vision worse than 20/200, is 58% in 10 years and 62% in 20 years. Sudden blurring of vision may occur with subretinal hemorrhage with and without CNV or serous macular detachment.7,20 For the patient, anti-VEGF treatment for the CME was considered, along with serial monitoring of fundus photos and macular OCT.

In summary, choroidal osteoma is a rare and benign choroidal tumor of healthy eyes of healthy young women wherein normal choroid is replaced with mature bone. It is primarily a clinical diagnosis, presenting as yellow peripapillary or juxtapapillary subretinal patches with scalloped borders. B-scan assists the diagnosis with densely hyperechoic concave band at the level of the choroid and optic nerve, which persists on decreased gain. It may either be growing, decalcified, or with CNV on presentation. Visual loss is due to CNV. Combination of anti-VEGF and PDT currently show optimal treatment.