Blindness is a global burden. The overall prevalence of blindness worldwide is 0.7%, with at least 7 million people becoming blind each year, and increasing by 1-2 million per year. About 90% of the world’s visually impaired live in developing countries, remaining a public health problem.1,2 In children, the prevalence of childhood blindness ranged from 0.3/1000 children aged 0-15 years in developed countries to 1.5/1000 children in developing countries.3-5

In the Philippines, there was a steady decline in the prevalence of blindness,6 with cataract, error of refraction, and glaucoma as the most common causes of blindness, and error of refraction topping the list of visual impairment. In children, the top 3 causes of visual impairment and blindness were error or refraction, cataract, and phthisis bulbi.6 The prevalence of blindness among children did not decline compared with previous studies as there was no program for prevention of childhood blindness in the Philippines at that time.6

To achieve the goals of the National Prevention of Blindness Vision 2020, it is important to identify the causes of visual impairment and blindness in children. Population-based data are expensive and more difficult to obtain. An initial step would be to access and analyze the records of children enrolled in schools for the blind or other programs. This study, therefore, aimed to identify avoidable causes of childhood blindness and visual impairment in a school for the blind in the Philippines.

The major anatomical site of abnormality and etiology of visual loss were determined for each eye and for each student. When two or more sites contributed to the visual impairment equally, or when sites of abnormality were different between the two eyes, the more preventable or treatable abnormality was selected. If neither eye had preventable or treatable abnormality, the more recent abnormality or the better eye was selected.7 Avoidable causes encompass both preventable and treatable causes. Preventable causes are conditions amenable to primary prevention where blindness can be entirely prevented; these include measles infection, vitamin A deficiency, ophthalmia neonatorum, adoption of harmful traditional eye practices, and intrauterine or perinatal infections.5 Treatable causes are conditions which can be treated early to prevent blindness (secondary prevention), such as glaucoma and ROP, or condition where sight can be restored (tertiary prevention), such as cataract or some cases of corneal opacities.5 Distribution of age, visual impairment, site and etiology of blindness, and avoidable causes were summarized using proportions.

A total of 147 medical records of children were reviewed. Seven were excluded because of incomplete diagnosis and 50 because of incomplete visual acuity measurements. A total of 90 records were included in the study. Eighty-six had visual acuity of either blind (76.7%) or severe visual impairment (18.9%) (Table 1). Of these, majority were children below 6 years of age (69.8%), and most were below 1 year (44.2%) (Table 2a). The mean age was 13 months with a range of 2 months to 11 years. There were 24 records with no recorded age (27.9%). There were more boys than girls (Table 2b). 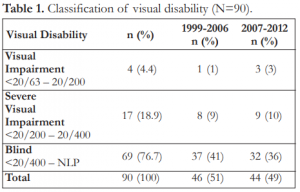 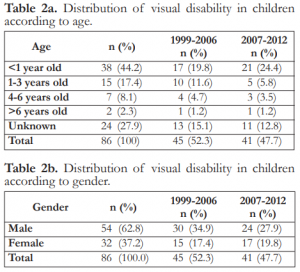 Table 2a. Distribution of visual disability in children according to age.

Table 2b. Distribution of visual disability in children according to gender.

The anatomic causes of severe visual impairment and blindness (SVI/BL) are shown in Table 3. More than half were from the retina (69.8%), followed by the whole globe (10.5%), the lens (7%), and the optic nerve (7%). Retinopathy of prematurity was the most common cause of abnormality (47.7%), followed by retinoblastoma (11.6%). All cases of retinablastoma were bilateral for which enucleation was done. Other retinal causes included persistent hyperplastic primary vitreous (PHPV), retinal detachment, retinal dysplasia, retinal coloboma. Cataract was the most common cause of abnormality in the lens. Cortical blindness was the single cause of abnormality in a normal-appearing globe while microphthalmia led the causes of abnormality involving the whole globe. 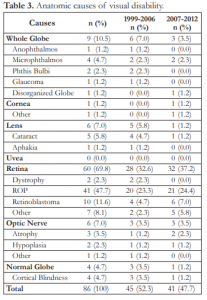 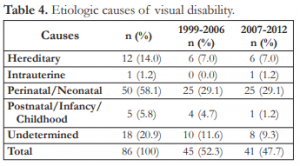 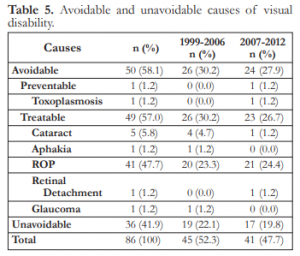 Most of the children enrolled in the Resources for the Blind early intervention and preschool program from 1999 to 2012 were below 6 years old (70%). This age range coincided with the target age population the program was aiming to serve. As a result, many of the causes of visual disability were due to perinatal etiology and less of childhood causes seen in a previous study done by Gilbert and Foster.12 There were also more males than females who enrolled in the program in a 2:1 ratio, similar to other studies in developing countries.3,8,9,10,11 There were also more students who were blind (80.2%) compared to those with severe visual impairment (19.8%). However, there was a significant number of medical records with no age included (27.9%), making the demographics somewhat uncertain.

Retinal disorders accounted for more than half of the anatomic causes of SVI/BL (69.8%); most of these were due to ROP (47.7%). The previous study by Gilbert and Foster done in blind schools in the Philippines in 1992 showed that retinal disorders ranked third following disorders of the whole globe (26.8%) and cornea (26.1%) as major causes of childhood SVI/BL.12 In that study, they compared prevalence of major anatomic sites based on the school location. They found that in the rural areas of Baguio and Davao, phthisis and corneal scarring secondary to vitamin A deficiency were the most common causes while in the urban areas of Manila, the most common cause was retinopathy of prematurity.

When we compared the number of ROP cases with the previous study done in Manila, its proportion increased from 16.7% to 47.7%. This increase could be attributed to increasing number of preterm births,13 survival of very low birth weight infants, and expanding neonatal and maternal services.8 Globally, only 15 countries accounted for two thirds of all pre-term births, and three of those countries were in East Asia, with the Philippines ranked 8th overall, third only to China and Indonesia.13 Infant mortality rate (IMR) has been declining steadily in the Philippines from 36.1/1000 live births in 1999 to 18.7/1000 live births in 2013,14 indicating improvement in healthcare delivery and socioeconomic development. IMR could also predict the risk of blindness due to ROP. In a previous study, the proportion of blindness due to ROP was plotted against IMR. The plot suggested that countries with high IMR of >60/1000 live births did not have a problem of blindness due to ROP because either neonatal ICU were not in place or premature babies did not survive long enough to develop severe ROP. Countries with very low IMRs (<9/1000 live births) also have lower rates of ROP blindness.11 This might be due to lower rates of prematurity, neonatal ICU care was good and oxygen supplementations were monitored, and babies who needed treatment were being detected and managed well. For countries like the Philippines with IMR in the range of 9-60/1000 live births, ROP is emerging as an important cause of blindness,11 as confirmed by our study.

In the previous study of Gilbert and Foster, the major causes of severe visual impairment and blindness were due to corneal scarring and phthisis bulbi, more notable in the rural areas of Baguio and Davao. This was also noted in other Asian studies where healthcare delivery was poor, especially in the rural regions where vitamin A deficiency and measles were a significant public health concern.15,16 In this study, there were no cases of vitamin A deficiency (VAD) or measles seen. VAD is a public health concern for preschool children in almost 122 countries worldwide.17 About 33.3% of preschool children are affected globally. Vitamin A deficiency in the Philippines has been slowly declining since 2003, from a prevalence of 40% to 15.2% in 2008 to 0.1-0.4% clinically evident.18 According to a World Bank report, the coverage for vitamin A supplementation in the Philippines reached 91% in 2010 from 76% in 2003.19 This was largely due to the universal vitamin A supplementation program of the Philippine government that started in 1993.18 Measles is also of public health significance in the Philippines with prevalence of 1/100,000 in 2013.20 The coverage of measles immunization in the country is 92% with supplemental immunization reaching 95% coverage.

Retinoblastoma was the second most common cause of blindness overall after ROP. In a study done in 2004, the incidence of retinoblastoma was estimated to be 237/100,000 of eye cases and has increased 5-fold over the last 35 years. The mean age of onset was between 12-18 months and bilateral in 30% of cases.22 In our study, retinoblastoma was found to cause blindness in 11.6% of students. It was bilateral in all cases and enucleation was done in all of them. The effect of bilateral blindness in these children and the age of onset were the significant reason for their increased enrollment in the program.

Cataract is a leading cause of surgically correctible blindness in the developing world with global incidence of 1-5/10,000 live births.8 In the previous study by Gilbert and Foster, cataract accounted for 14.5% of causes of severe visual loss and blindness.12 This was similar to other studies from Malaysia (17.2%), Thailand (16.9%), and Indonesia (16.4%).8,10,12 In our study, visual loss and blindness from cataract was found in 5.8% (5/86) of cases. A better access to healthcare, early detection, successful treatment outcomes, and various government programs might have contributed to the reduction of pediatric cataract cases. There is still a pressing need to continually address this by educating our primary healthcare providers and teachers and by formulating programs for vision screening in schools.

Most of the etiologic causes of childhood SVI/BL were due to perinatal/neonatal factors in 58.1%, such as retinopathy of prematurity (47.7%) and cerebral hypoxia leading to cortical blindness (5.8%), followed by unknown etiology in 20.9%, and hereditary causes in 14%. In the previous study by Gilbert and Foster, etiology of SVI/BL was unknown in 35.6% or due to childhood factors (31.7%) with perinatal/neonatal factors accounting for only 15%. This was mostly due to cataract and glaucoma, and VAD and measles keratopathy.12

A large number of medical records (61/147) were not included in the study because of incomplete data and/or unavailability of medical records. Though inherent in this kind of study, inclusion of more records would be the norm if there was a standard form and method of recording the findings, such as the WHO/PBL ERCB, which could be used to keep the database of students in blind schools and hospitals.7

Studies on children in schools for the blind should be taken with caution because data from these studies may not be representative of the total childhood SVI/BL population and might be underestimated compared to a population-based study.3 To obtain a population-based childhood SVI/BL study, a large number of children are needed to obtain meaningful data on its causes because of its relatively low prevalence rate (0.46%) in the Philippines.6,3 Children from poor and remote communities and children with multiple handicaps are also greatly underrepresented because of inaccessibility of the schools and lack of trained personnel for handling multiple disabilities.6 Other reasons why these children may not enroll or seek help are because of parental fear and social stigma associated with any physical disability.8 However, data from blind school studies can provide valuable information on the major cause of childhood blindness in a particular area. A large number of children/medical records can be examined by a special team, using a standard methodology in a short period of time, making estimation of the prevalent causes possible.

In conclusion, more than half of the major causes of BL/SVI were potentially avoidable, with retinopathy of prematurity (ROP) as the leading etiology. It is recommended that a more comprehensive ROP awareness and screening programs be instituted at the institutional and national levels to help decrease the burden of this potentially avoidable disease. In addition, further hospital and population-based studies should be performed to validate these observations and establish the true prevalence and incidence of blindness in children.