METALLIC objects are often involved in penetrating injuries to the eye. In the United States alone, 18 to 40% of penetrating injuries have at least one intraocular foreign body (IOFB). Most of these occur at work. About 80% of cases are caused by metal striking metal. The number of such injuries increases during times of leisure.
1 The metallic IOFB must be removed immediately from the eye to stop infection and avoid leeching of ferrous materials, which are both damaging to the eye. 2 Magnetic extraction has been around for over a century. In 1869, Dixon deliberately incised an eye to deliver a metallic foreign body. In 1874, Mckeown went further by exploring an eye with the tip of a magnet introduced in the vitreous. William Sturgeon developed the first electromagnet by the mid-1800s. In 1875 Julius Hirschberg pioneered its use in ophthalmology. 3 Although the size of a minivan, it performed quite well. Chiquet et al. prefer magnetic extraction provided that the metallic IOFB is within the vitreous. 4 Rare earth magnets are commonly used to extract metallic IOFBs. However, their strength is unpredictable and they do not offer much flexibility. Electromagnet uses electric current converted into a magnetic field. It is this variable source of energy that makes it stronger, flexible, and predictable compared with large rare earth magnets. Commercial models available today do not come cheap. A basic unit plus peripherals will cost around US$6,000. Electromagnets work by collecting electrons at the negative terminal of a battery. These electrons will flow to the positive end through a conductor. When a wire is connected between the positive and negative terminals of a battery, three things will successively occur:
1. Electrons will flow from the negative to the positive end of the battery.
2. Within several minutes, the battery—if its two terminals are connected directly—will drain.
3. A small magnetic field is generated in the wire, which is the basis of the electromagnet.
A higher load of current will make a stronger magnet. But there is a limit to how much current can flow through the wire before it heats up. If the probe gets too hot, it may damage ocular tissues. This may be avoided by having a capacitor installed in the unit. Since a stronger current would waste a lot of energy it is wise to use a regulator. Adding coils to the electromagnet also adds power.

METHODOLOGY
A test model that included a 24-volt battery and a soldering-iron holster with a metal bar the size of a pen acting as the material to be magnetized was used. The iron bar was magnetized but it absorbed most of the heat. By replacing the iron holster with solenoid coils, heat was localized instead of being absorbed by the material to be magnetized. A capacitor was also installed to provide successive storage and discharge of electrical energy to avoid a surge of current that would generate heat. High magnetic power is equivalent to a high source of energy. To turn alternating current (AC) into a turneddown direct current (DC), a transformer was installed. These modifications were necessary to reduce heat while supplying a strong adjustable source of electromagnetic field.
Alternating current from the electric outlet will go to the transformer, where a rectifier will convert it to pulsating DC with 50-volt maximum power (Figure 1). This will then go to the capacitor for filtering to become pure DC, which in turn will supply the solenoid coils with current to generate the electromagnetic field. For the electromagnet to work, the probe must be capable of transmitting the magnetic field and fit into a small pars plana incision. This posed a problem because magnetic power is affected directly by surface area and inversely by the distance the magnetic energy has to travel from the power source. Thus, if the medium is thin and long, magnetic power will be markedly diminished. A stainless ophthalmic curette was fashioned similar to a dart tip and mounted on a 5/32 x 3/8 GI-stove bolt to serve as probe. The intraocular probe excluding the bolt was 22mm in length with a tip diameter of .05mm. For external extraction through a sclerostomy site, a probe with a blunt tip and a bigger surface area was designed.
Two kinds of coils were designed:
• A small coil that gives more flexibility to the surgeon but with less magnetic power for use with the thinner, sharper probe for intraocular extraction via pars plana
• A bigger coil with more magnetic power that could be fitted with the blunt tip probe for external extraction via sclerostomy. 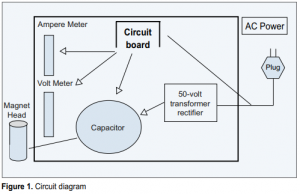 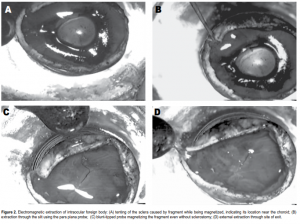 The whole circuitry was housed in an old automatic voltage regulator casing fitted with voltage and ampere meter. Separate switches were installed—a power switch and a voltage switch that would activate the electromagnetic power. The electromagnetic probe was compared with a larger permanent circular magnet to determine how many paper clips each of the magnets could pick up from end to end. This was to measure not the magnetic strength but magnetic accuracy. Magnetic strength is measured with a gauss meter, which is not available locally. But it is possible to devise simpler methods of measuring magnetic capacity. The magnetic strength of the electromagnet with the blunt tip was quantified by determining the maximum weight it could carry using a metal plate and lifting it. The electromagnetic probe was compared with a strong rare earth permanent magnet used in ophthalmology by putting a metallic object between the two magnets and engaging them in a tug-of-war. 1% sodium hyaluronate gel (Alcon Laboratories, Fort Worth, TX, USA) was used as a substitute for vitreous. A 3mm x 1mm metallic fragment was suspended in a tube of this polymer. The capability of the electromagnetic probe to magnetize a particle with an interface (cohesive viscoelastic) between its tip and the metallic fragment to be magnetized was tested. The magnetic extraction of the metallic shard was videotaped. The porcine eye was cut circumferentially anterior to the equator. The lens and parts of the iris remained intact while part of the sclera was removed. The anterior hyaloid phase was not disturbed. Using a pair of 0.12mm forceps, a 6x5mm metallic fragment was placed intravitreally near the optic nerve. Through a 3mm sclerostomy where the electromagnetic probe was inserted, magnetic extraction was performed.

RESULTS
The device and peripherals cost PhP3,500 compared with commercial models costing 100 times more. The pars plana magnetic probe can hold four paper clips end to end vis-à-vis the bigger and heavier permanent magnet that can hold three paper clips. The electromagnetic coil had a maximum lifting capacity of 8.5 lbs or 4.25 kgs at 50-volt setting. During the pretesting of the device, the pars plana probe magnetized a 3mm x 1mm metal fragment suspended in a tube of 1% Na Hyaluronate gel at a distance of 6mm. The extraction proceeded smoothly with the device set at 24 volts, below the full setting of 50 volts (Figure 2).

DISCUSSION
Poor final vision (20/400 or less) following posterior segment IOFB removal by electromagnet has been associated with these factors: initial vision lessthan 20/200, IOFB 3mm or longer, and presence of posttraumatic retinal detachment. 4 With the post operative visual acuity (VA) as the main outcome measure, Chiquet et al. used electromagnetic extraction without vitrectomy to retrieve metallic IOFB. The authors reported that in 26 (65%) eyes , a significant improvement in VA after surgery occurred (p = 0.0001), with 23 (58%) patients attaining functional success and nine (23%) retaining preoperative VA. Seventy (70) of the patients obtained a final VA ≥ 20/40. 4 In a study by Greven et al. where 64% of IOFB retrieval was done through pars plana vitrectomy and the rest by scratch-down sclerostomy and forceps, a final VA ≥ 20/40 or higher was achieved in 42 (71%)of 59 consecutive patients, 20/50 to 20/200 in 7 patients, 20/300 to 5/300 in 1 patient, and <5/200 in 9 patients. Ambulatory vision, defined as >5/200, was achieved in 50 (85%) patients. The authors, however, noted that comparing visual acuity results among studies was difficult because of the variable circumstances involved in ocular trauma. 2 At the East Avenue Medical Center, electromagnetic extraction is preferred over vitrectomy because it preserves the vitreous and may be performed regardless of the depth of the IOFB.  Chiquet et al. noted that most surgeons prefer electromagnetic extraction in posterior segment IOFB regardless of the presence of small or moderate vitreous hemorrhage, whereas pars plana vitrectomy is reserved for nonmagnetic IOFB, intraretinal or encapsulated IOFB, dense vitreous hemorrhage, and management of late complications. 4 The strength of the device we developed lies in the simple theory of electromagnetism. It presented the possibility of assembling an electromagnetic device from cheap locally available electronic parts. In this study, we were able to demonstrate that the assembly worked. At 24-volt setting (half the device’s actual power), the electromagnetic probe easily extracted—internally using a pointed probe and externally using a blunt probe—the metallic foreign body placed intravitreally in porcine eye. At a lower setting the device could orient the foreign body to its long axis for better and safer extraction through sclerostomy. Electromagnets may also be used to remove foreign bodies in the anterior chamber generally found at the iris plane. Removal of the foreign body in the entry wound is not recommended. Rather, a shelved incision through clear cornea or sclera is done depending on the size and location of the foreign bodies. A gauge 20 electromagnetic probe is inserted through this incision. The objects align themselves along the plane of the magnet, facilitating their removal. In summary, this study presents the techniques for assembling a low-cost electromagnet for removal of metallic intraocular foreign body. It has the following limitations:
• The device could only be used in extraction of magnetic nonencapsulated IOFB.
• Compared with permanent magnets, the device needs an electrical source to operate.
• In the absence of a foot switch, a second individual is needed to operate the voltage regulator during sterile conditions.