Intravenous methylprednisolone versus oral prednisone for initial attacks of optic neuritis, A review of evidence

OPTIC neuritis, an inflammatory disorder of the optic nerve, has been cited as the most common optic neuropathy in adults, particularly individuals below 46 years of age.1 The common presentation of acute optic neuritis is that of an isolated clinical event manifesting with periocular pain, abnormal decrease in visual function, a relative afferent pupillary defect and abnormal electrophysiologic optic-nerve findings. Fundus findings range from a normal appearance of the optic nerve to opticnerve-head edema (papillitis). Using magnetic resonance imaging, changes in the form of white matter abnormalities similar to those in multiple sclerosis are seen in 50 to 70% of patients with monosynaptic optic neuritis.1 Steroids have long been used in the treatment of optic neuritis. Their effectiveness has been assessed utilizing clinical outcomes, particularly their effect on improving the visual function of patients. However, due to the high cost of intravenous methylprednisolone in the Philippines, local ophthalmologists often use oral-steroid preparations instead. It is the objective of this paper to review current available evidence that addresses the efficacy of intravenous methylprednisolone compared with oral steroids in improving vision among patients with optic neuritis.

SEARCH METHOD
An electronic literature search covering the years from 1980 to 2005 was performed using Medline (PubMed).
The key words utilized were “optic neuritis,” “steroids,” and “vision.” The search was further limited to randomized controlled trials, metaanalysis, or reviews published in the English language. Free-text and MeSH search methods were employed to maximize the number of hits. Table 1 presents the search process performed. Titles and abstracts identified from items 5, 7, 8, and 9 in Table 1 were reviewed for appropriateness in answering the clinical question. Twenty-three citations listed among the randomized controlled trials were considered appropriate to answer the clinical question. Most of these were reports concerning the results of the Optic Neuritis Treatment Trial (ONTT), a multicenter, randomized controlled trial sponsored by the National Eye Institute of the United States National Institutes of Health. 2-11, 13-16
Only 1 metaanalysis and 5 reviews from the search qualified. Of these, only 2 were retrieved for further
evaluation.1, 12 It is noteworthy that the metaanalysis and reviews made primary reference to the ONTT.
The first major article on the results of this landmark study published in 199211 and the follow-up reports on
the five-year and ten-year visual outcomes published in 1997 and 2004 were reviewed and appraised for purposes of answering the clinical question.2, 15 Additional information regarding specific aspects of the trial was likewise referred to when necessary. 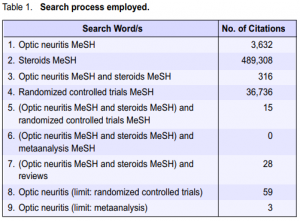 their treatment as a single morning dose. The dose was subsequently reduced to 20 mg on day 15 and 10 mg on days 16 and 18 for both prednisone treatment arms.11 The primary outcome measures were visual fields and contrast sensitivity. Visual acuity and color vision were secondary measures. Subjects were also monitored for occurrence of new attacks in either eye and the development of multiple sclerosis.

DISCUSSION
Validity criteria
The Optic Neuritis Treatment Trial was first appraised for validity in addressing the following issues:
Selection bias. Patients were randomly assigned in equal numbers to the 3 treatment groups. Allocation concealment was attained by using permuted blocks with a separate sequence for each clinical center. Adverse effects and associated events were recorded at each visit.11  In all 3 groups, patients were predominantly female Caucasians. Age distribution was also similar for all groups with a median of 32 years. Median weight did not differ significantly among the 3 treatment groups. Clinical characteristics described included duration of visual symptoms, presence of ocular pain, and optic-disk swelling. Baseline measurements of visual function (contrast sensitivity, visual-field deviation, visual acuity, and color vision) of patients did not differ significantly
among the 3 groups. The number of patients diagnosed with multiple sclerosis was, however, lower for the IVMP group (3 patients) compared with the oral-prednisone and placebo groups (7 patients each). In terms of patient characteristics, the 3 groups did not differ significantly.8 Performance bias. Both subjects and outcome assessors were blinded as to the treatment received in the oralintervention arms of the study. The IVMP arm was not blinded since the subjects assigned to this group required 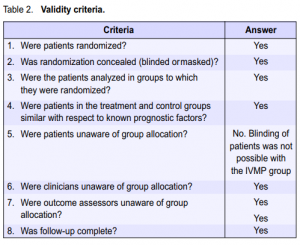 hospitalization and were, therefore, aware of the treatment they were receiving. While it would have been ideal to have a direct comparison between IVMP and IV placebo, administration of placebo via the IV route was not possible for ethical reasons. Nevertheless, efforts were also made to mask the outcome assessors in the evaluation of the IVMP group.11 Thus, every effort was taken to ensure that performance bias was kept to a minimum. Exclusion bias. The authors of the study were able to account for all patients for the duration of the study. Mention was made of exclusion of 2 patients after randomization because of misdiagnosis, but they were included in the data analysis based on their original group assignment. There were 26 dropouts by the end of the six-month period, 8 in the oral prednisone group and 9 each for the placebo and IVMP groups.11 The dropout rate, however, was below the acceptable limit of 20%. At the conclusion of the trial in 1992, 410 patients consented to continue follow-up until 1997. Beyond 1997, 387 patients consented to continue follow-up to complete the ten-year period. The five- and ten-year reports published by the Optic Neuritis Study Group were based on results from this cohort of patients. The ten-year report on visual recovery stated that of the 387 patients who gave their consent, examination was completed for 319 patients (82%). The status of the 135 original ONTT patients who did not complete the ten-year examination was, however, accounted for. Comparison of the characteristics of the 319 patients who completed the examination with the 135 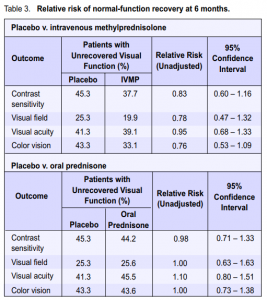 patients who did not showed that they were similar with respect to age, sex distribution, proportion with abnormal baseline brain magnetic-resonance-imaging results, and proportion of patients with multiple sclerosis at baseline. Patients not completing the examination were, however, more likely to be African–Americans and, on average, had slightly worse acuity in the affected eye at baseline.2 Since all patients were accounted for by the investigators, exclusion bias was, therefore, kept to a minimum. Table 2 presents a summary of the answers to the various validity criteria set for treatment trials. Despite incomplete masking, it is safe to conclude that the study was valid.

Results of the study
In the data analyses, each steroid group was compared with placebo, but no direct comparison between the 2
steroid regimens was made. Visual function. The relative risk for nonrecovery of visual function for the different outcomes is presented in Table 3. A relative risk (RR) less than 1.0 would be indicative of benefit from the intervention (steroid) while a relative risk greater than 1.0 would imply harm. Stratified results (based on visual function at the time of study entry) can be obtained from the original article. The visual outcomes in the IVMP group seemingly showed better chances of recovery (point estimates) compared with those in the placebo group. The oralprednisone group showed no benefit or reduction in risk in all outcome measures, except in contrast sensitivity, compared with the placebo group. These trends were, however, satistically insignificant based on the confidence intervals. In a separate report that evaluated correlation between several parameters and factors predictive of visual recovery, student t-test and least squares regression demonstrated that baseline visual acuity was a statistically significant predictor of the six-month visual acuity (Table 4). However, most patients with severe initial visual loss eventually had good recovery of vision, implying that the significance was more statistical than clinical.7 Patients who consented to participate beyond the original study duration were examined in the fifth and tenth year posttreatment.2, 15 Visual-function tests in the fifth year were normal or slightly abnormal in the affected and fellow eyes of most patients. Contrast sensitivity was frequently abnormal compared with the other visualfunction parameters in affected eyes. There was minimal change in vision from the sixth-month to the fifth-year exam.6, 7, 9 There was no significant difference in visual function after 5 years among the 3 treatment groups. Most patients retained good to excellent vision in the tenth year, with normal or slightly abnormal visualfunction-test results. There was no significant difference
in visual function among the 3 treatment groups. 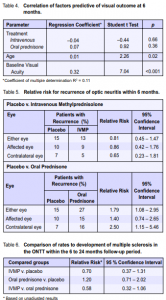 The ONTT results showed that while the risk of recurrence for the affected eye did not differ significantly between the placebo and oral-prednisone groups, it was significantly increased for the contralateral eye. Comparing the risk of recurrence in either eye also showed a significantly higher risk for the oral-prednisone
group (Table 5). Comparisons between the placebo and IVMP groups revealed insignificant differences in risk of recurrence for either the affected or contralateral eye as supported by the confidence intervals. The five-year results reported the cumulative probability of having a new episode of optic neuritis during the 5 years of follow-up at 19% for the affected eye, 17% for the fellow eye, and 30% for either eye. In consonance with 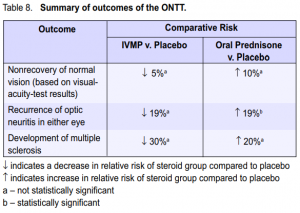 the data reported from the two-year follow-up period, the probability of a new attack in either eye in the oralprednisone group was almost twofold (41%) that in either the placebo or intravenous group (25%). In addition, 14% of the patients in the oral-prednisone group had more than one episode in either eye compared with 7% in both the placebo and IVMP groups.15 Among the patients who completed the ten-year followup examination, 35% had a documented recurrence of optic neuritis in the affected eye (at study entry), at least
1 attack of optic neuritis in the fellow eye, or both after entry into the ONTT. The proportion of patients with a
recurrence in either eye was significantly higher in the oral-prednisone group (44%) than in the IVMP (29%, p = 0.03) or placebo group (31%, p = 0.07).2

STUDY AUTHORS’ CONCLUSIONS
In most patients with optic neuritis, recovery of vision is rapid—within 2 to 3 weeks after the onset of symptoms even without treatment. The only factor of value in predicting the visual outcome is the initial severity of vision loss. However, even when initial loss is severe, recovery of vision is still good in most patients. In the ONTT, treatment with high-dose intravenous methylprednisolone followed by oral prednisone accelerated recovery of vision but provided no long-term benefit to vision. Most patients retained good to excellent vision 5 to 10 years following an attack of optic neuritis regardless of the type of treatment they received.2, 11, 15 The probability of a new attack of optic neuritis in either eye was higher in the oral-prednisone group than in the other 2 groups. The probability of recurrence in either eye was greater among patients in whom clinically definite multiple sclerosis was diagnosed by the fifth and tenth
year of follow-up.2, 11, 15 Treatment with high-dose intravenous methylprednisolone followed by oral prednisone produced a short-term reduction in the rate of development of clinically definite multiple sclerosis, but there were no significant differences among treatment groups in either the risk of development of clinically definite multiple sclerosis or in the degree of neurologic disability among patients who developed
clinically definite multiple sclerosis 5 or 10 years following the initial attack of optic neuritis. 2, 11, 15 Intravenous methylprednisolone was generally well tolerated. Only 2 patients reported serious side effects, both cases of which resolved without sequelae.11

Intravenous methylprednisolone should be considered for use in patients with acute optic neuritis if there is a
need to speed up recovery of vision. Since long-term visual outcomes were comparable in the 3 treatment groups, and the oral-prednisone regimen, in doses given in this trial, was found to be associated with an increased risk of recurrence of optic neuritis in either eye, no treatment is an option for patients with an initial attack of optic neuritis. Baseline MRI studies should ideally be done for patients suspected of having optic neuritis in order to assess their odds of developing clinically significant multiple sclerosis. The clinical applicability of study results should be considered from the point of view of patient characteristics, values, and preferences. The cost of a three-day course of IVMP should be considered in treating any patient with optic neuritis in the local setting. Studies utilizing oral prednisone at doses other than that used in
the ONTT study may be explored as alternative treatment. In recent years, results of a trial comparing the administration of interferon with IVMP have been published. These should also be reviewed.