AQUEOUS humor is the clear liquid of the anterior and posterior chambers that inflates the globe and
maintains adequate intraocular pressure (IOP); provides nutrition for the lens, cornea, and trabecular meshwork; and facilitates cellular and immune responses. It is formed by the nonpigmented epithelium of the ciliary processes by three mechanisms: diffusion, active secretion, and ultrafiltration.1 The rate of formation is affected by the integrity of the blood–aqueous barrier, blood flow to the ciliary body, and neurohormonal regulation, and has been said to vary diurnally and drop during sleep. It also decreases with age.2, 3 The rate of flow of the aqueous humor through the anterior chamber is one of the major determinants of IOP.1, 2, 3 This rate can be measured using a fluorophotometer. Fluorophotometry is a noninvasive method of determining the concentration of fluorescent tracers (fluorescein dye) in living ocular tissues.1 Fluorescein may be administered intravenously or topically. These are fundamental to measuring aqueous flow inside the eye.2 In the Philippines, the only fluorophotometer machine available is the Ocumetrics FluorotronTM Master (Ocumetrics Inc., Mountain View, CA, USA). It was originally designed to measure the leakage of fluorescein dye from the retina into the vitreous in a similar fashion that fluorescein angiography photographs this leakage. This product has now been further developed for eye research involving the anterior segment. The FluorotronTM Master comes with a special computer algorithm for subtracting background and vascular fluorescence so that only penetrated fluorescein is measured. It also utilizes various mathematical algorithms, such as the Yablonski principle, to determine endothelial permeability and aqueous flow. Coupled with IOP readings, this information can be used to determine aqueous-outflow facility. The barrier between the blood system and the anterior segment of the eye is not tight, as some fluorescein can penetrate it even under normal conditions. However, since the FluorotronTM Master can make a precise measurement of the amount of fluorescein that gets in, it can easily differentiate a normal amount from an abnormally high amount. Aqueous flow can be determined by instilling the cul-de-sac with 2% fluorescein.1, 2 This dye is safe and has
no adverse effects to the function of the eye when used topically. It distributes itself evenly into the depths of the cornea within 15 to 20 minutes. After 2 to 3 hours, the concentration of fluorescein in the cornea falls as the concentration in the anterior chamber rises. The dye leaves the cornea by diffusion through the endothelium.1, 4, 5 After this period, the concentrations fall in a very constant manner. The FluorotronTM Master automatically calculates these values to determine aqueous flow.

The most common risk factor in glaucoma is IOP, which is determined by aqueous-flow rate, aqueous-outflow rate, and episcleral venous pressure. Understanding these factors that determine IOP could lead to a better understanding of the disease. In a study by Bloom and associates, differences in aqueous flow in adult eyes between races (white and black) were noted.3 No reports, however, were published examining the aqueous-humor flow in Asian eyes. This study determined the rate of aqueous-humor flow in Filipino eyes using the Ocumetrics FluorotronTM Master fluorophotometer. Factors associated with aqueous humor flow and aqueous outflow were determined.

This study was conducted at the Sentro Oftalmologico Jose Rizal of the University of the Philippines–Philippine General Hospital in accordance with the guidelines set by the Declaration of Helsinki. Informed consent was obtained from all the subjects after a thorough explanation of the nature and possible risks and benefits of the study. Subjects were recruited from the Outpatient Eye Clinic of the Department of Ophthalmology and Visual Sciences between January 2007 to October 2007. Patients 18 years and older who were seen at the outpatient clinic underwent basic ophthalmologic evaluation, including collection of demographic data; ocular, medical, surgical, and medication history; applanation tonometry (HaagStreit); slitlamp biomicroscopy of the anterior segment; stereoscopic funduscopy; and gonioscopy employing standard methodology. Excluded were patients with glaucoma; ocular hypertension or an IOP response to steroids; diabetes mellitus; thyroid-related eye disease; intraocular infection; meibomian-gland dysfunction; dysfunctional-tear syndrome; lid abnormalities or diseases; uveitis; retinal pathology; corneal abnormalities such as neovascularization, opacities, or dystrophies; history of trauma or those who wore contact lenses or had undergone any form of intraocular laser and incisional surgery. Those who fulfilled the inclusion criteria underwent additional examinations such as ultrasonic pachymetry (Pocket II, Quantel Medical, France), A-scan (OTI Scan 1000, Ophthalmic Technologies Incorporated, Canada), dilated-fundus examination using an indirect ophthalmoscope (Keeler Vantage), and fluorophotometry (Fluorotron Master) performed in the morning. Twopercent fluorescein dye (Fluorets, Chaurvin Pharmaceuticals, England) was instilled on the cul-de-sac three times, three drops every five minutes. The eye was washed with balanced saline solution 15 minutes later to remove the excess fluorescein. To ensure that the fluorescein in the anterior chamber was in steady state with the cornea, fluorophotometric scans were made 4 hours after instillation of fluorescein. Three scans were made on each eye every 30 minutes for 2 hours. Data were collated using the fluorophotometer to arrive at a specific rate of aqueous flow and, with the determined IOP, the aqueous-outflow facility as well. The following outcome measures were recorded: age, sex, IOP, central corneal thickness, anterior-chamber (AC) depth, anterior-chamber volume, rate of aqueous flow, and aqueous-outflow facility. Descriptive statistics including mean, standard deviation for continuous variables, and percentage frequency distribution for categorical data were obtained. Nonparametric Kruskal-Wallis analysis of variance was used to determine the variation of aqueous-humor flow across specified age groups due to the skewed age stratification. Statistical correlation between continuous variables was performed using Pearson moment product correlation(r): 0 – 0.25 (or – 0.25) = little or no relationship, 0.25 – 0.50 (or – 0.25 to – 0.5) = fair relationship, 0.50 – 0.75 ( or -0.50 to – 0.75) = moderate to good, and > 0.75 (or -0.75) = very good to excellent relationship. All tests of significance were pegged at 0.05 alpha level of significance, 95% confidence interval, using Statistica version 1999.

Out of 957 patients examined, 37 were included in the study. A total of 74 eyes underwent fluorophotometry. The mean age of the study population was 46.6 ± 11.1 years (range 19 to 69), with the fourth decade having the most common cluster (26 cases or 35%), followed by the fifth decade (24 cases or 32 %), third decade (10 cases or 13.5%), and the sixth decade (6 cases or 8%). There were more females (40) than males (34). An equal representation of both eyes was seen. The different ocular parameters are shown in Table1. The mean rate of aqueous-humor flow was 2.78 ± 0.27 µL/ min. Figure 1 shows an almost symmetric normal curve. The rates did not vary with the eye assessed nor with gender (Table 2). Similarly, no significant variation was noted with the flow rate across the decades of life represented (Table 2). Among all variables analyzed, a positive but fair relationship was seen with aqueous-humor flow and AC volume and depth (r = 0.35, p = 0.002 and r = 0.36, p = 0.002) respectively. No statistical association was noted with pachymetry and age (Table 3). Aqueous-outflow facility was inversely and fairly correlated with pachymetry. (r = –32, p = 0.006). No association was noted with age and AC volume and depth (Table 4). 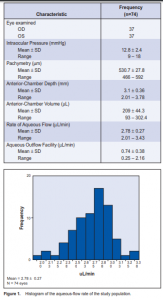 DISCUSSION
Fluorophotometry is a noninvasive method of determining the concentration of fluorescent tracers in living ocular tissues.1 With the use of fluorescein as a tracer administered topically to the eye, aqueous-humor flow
can be measured. Aqueous-humor flow has been said to peak in the morning, slightly decrease in the afternoon, and is lowest during sleep. These changes throughout the day reflect a biologic pattern. The mean rate of aqueous-humor flow between 8 in the morning and noon is 2.97 ± 0.77 uL/ min. The normal rate is 1.5 to 4.5 uL/min.6 In this study, 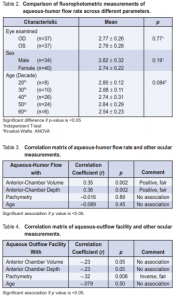 the rate of aqueous-humor flow was 2.78 ± 0.27 µL/min, which lies within the normal range. Several factors influence aqueous-humor flow. Systemic disease such as diabetes mellitus and ocular diseases such as inflammation and retinal detachment reduce flow. With aging, there is usually a decline in aqueous-humor production at about 2.4 to 3.2% per decade after age 10 years.6 Van Best and coworkers noted a 0.5% decrease of volume per year of age. In this study, no decrease was noted when the results were grouped per decade. There was no significant variation between decades as well. Gender difference in aqueous-humor flow rate may be due to small differences in ocular structures, wherein females appear to have a trend of lower flow.6, 8 In this study, the difference in flow rates between males and females was not statistically significant. AC depth and volume have been described by Bloom and associates as having a direct correlation with aqueousflow rate.3 They have also described an inverse relationship between age and AC volume possibly because of an increase in the size of the lens as new lens fibers develop throughout life.7 This study showed only a fair positive correlation of AC volume and depth with aqueoushumor flow. No correlation was noted with age. This may be due to the small sample and the skewed distribution in the age groups. In conclusion, the rates of aqueous humor flow (2.78 ± 0.27 mL/min) among normal Filipinos eyes were similar to those reported in the literature. There was fair correlation of the aqueous-humor flow with AC depth and volume but not with age and gender. A larger sample size may provide a stronger correlation between these factors.