IN BABIES at risk, performing a well-timed initial examination to screen for retinopathy of prematurity (ROP) can detect the onset of retinal changes before they become permanently destructive. As knowledge and experience increase, criteria have been recommended and adjusted for the initial, follow-up, and concluding retinal exams. Because neonatal care and ophthalmologic technology vary around the world, each center is encouraged to determine the applicability of screening criteria to their local settings. The International Classification of Retinopathy of Prematurity study (ICROP)1 recommended a method for classifying the stages, location, and extent of ROP. The classification made it possible for multicenter, large population studies and the establishment of guidelines for ROP screening. The Multicenter Trial of Cryotherapy for ROP (CRYOROP Study)2 used the ICROP classification and documented the benefit of retinal ablation in reducing the proportion of infants who progressed to retinal detachment. The criteria for babies at high risk for ROP had birth weights (BW) of <1,251 grams. The initial retinal exam was performed at postnatal age (PNA) 4 to 7 weeks. No data regarding age of gestation (AOG) were mentioned. The Light Reduction in ROP (LIGHT-ROP) study3 evaluated the effects of ambient-light exposure on the incidence of ROP and found no significant difference between babies with and without goggles. This study included babies with AOG <31 weeks and BW<1,251 grams. Retinal examinations were initiated at PNA of 4 to 9 weeks. Wright et al.4 proposed that the initial retinal exam be performed in babies who were born <32 weeks AOG, with a higher limit for BW at <1,500 grams in order not to miss ROP in the less severe stages. In 2001,the American Academies of Pediatrics (AAP) and Ophthalmology (AAO) together with the Association of Pediatric Ophthalmology and Strabismus (AAPOS)5 jointly recommended that ROP screening be done for all babies born at AOG of <28 weeks and with birth weight of 1,501 grams, with the first retinal exam performed at PNA of 4 to 6 weeks or postconceptional age (PCA = PNA + AOG) of 31 to 33 weeks, whichever was later. Gonzales et al. (Retinopathy of prematurity in the Philippine General Hospital; 2002; unpublished) reported preliminary data on the profile of ROP at the University of the Philippines–Philippine General Hospital. They used a combined criteria of BW <1,500 grams as recommended by the Joint Statement of AAP, AAO, AAPOS6 with an older AOG of <32 weeks as suggested by Wright and colleagues4 in order not to miss babies with earlier, less severe stages of ROP. Older and larger babies with unstable perinatal courses, assessed to be at risk by their neonatologists, also underwent ROP screening. The initial retinal exam was performed at PNA of 4 to 6 weeks and PCA of 31 to 33 weeks. This study assessed the applicability of the modified criteria used by Gonzales and colleagues to initiate retinal fundus examinations in babies at risk for ROP. It also described the estimated AOG, BW, PNA, and PCA used in the criteria, and the general fundus findings at the initial retinal examination.

METHODOLOGY
All ROP charts of babies admitted into the Department of Pediatrics Neonatal Intensive Care Unit (NICU), University of the Philippines–Philippine General Hospital (UP–PGH) from January 1, 2005 to December 31, 2008 were reviewed. Data collected included date of birth, sex, age of gestation (AOG), birth weight, postnatal age (PNA), postconceptional age, and ROP classification. All babies were referred and cleared by their attending neonatologists for retinal examination to screen for ROP. Consent for the procedure was obtained from the parents or guardians, or in the case of abandoned babies from the pediatrics resident in-charge. Eyes were dilated with tropicamide 0.5% and phenylephrine 0.5% combination eye drops (Sanmyd, Santen, Osaka, Japan). Binocular indirect ophthalmoscopy was done with the aid of an eyelid speculum and scleral indentor suitable for neonatal use, with swaddle restriction and topical anesthesia (Proparacaine hydrochloride 0.5%, Alcaine, Alcon Laboratories Inc., Fort Worth, TX, USA). Examination was done by the medical-retina fellows of the Vitreoretina Service, Department of Ophthalmology and Visual Sciences of UP– PGH, corroborated by one faculty ophthalmologist. Classification and recording of ROP followed the guidelines set by the International Classification of ROP: 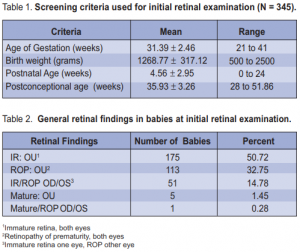 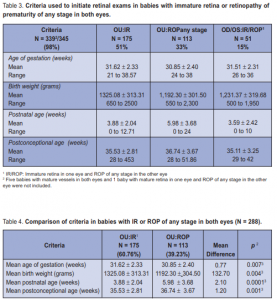 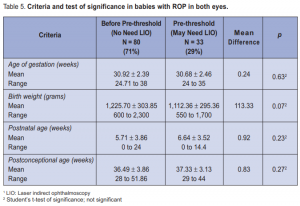 ICROP, ICROP: Revisited7 and by the Early Treatment of ROP study (ETROP).8 All examinations were performed at the Neonatal Intensive Care Unit (NICU) with the NICU or pediatrics staff in proximity. Descriptive statistics and Student’s t test were used to analyze the data. 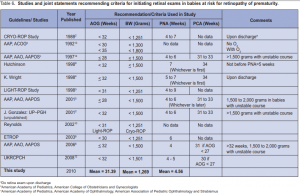 DISCUSSION
The screening criteria used in this study (Table 1) suggested that retinal exams to screen for ROP should be initiated for all babies born at AOG < 31.39 weeks and BW < 1,268.77 grams, as well as for older and larger babies at risk for ROP. At a mean PNA of 4.56 weeks and mean PCA of 35.93 weeks, 50% of the babies were assessed with IR (51%) or mature retinas (1%) in both eyes and a third with ROP (33%) of any stage (Table 2). As in other studies,2, 3, 7 this study found more babies to have ROP of any stage at lower AOG and BW (Tables 3 and 4). The mean PNA (5.98 weeks) and mean PCA (36.74 weeks) at initial examination were significantly
higher (p < 0.05) in babies found to have ROP in both eyes compared to those with IR (Table 4). This suggested that conducting the initial retinal exam at a mean PNA of 3.88 weeks would allow monitoring of fundus changes starting at IR. There were no significant differences (p > 0.05) between the criteria for babies who were assessed to be in no imminent need for LIO and those with pre-threshold ROP who may need LIO (Table 5). This implied that AOG, BW, PNA, and PCA alone were not sufficient to predict the onset of ROP fundus changes that may need LIO at a future time. The data suggested that the initial retinal exam should be conducted at PNA earlier than 6.64 weeks or at PCA less than 37.33 weeks to catch the earlier stages
of ROP. This finding was in agreement with those of Hutchinson and associates9 who cautioned against performing the initial retina exam at PCA of 35 weeks, noting that by this time there could be a few babies in the threshold disease missed by as long as 1 week. Reynolds and colleagues10 reported on evidence-based
screening criteria for ROP using the data from the CRYOROP and LIGHT-ROP studies. He noted a “time window” for the development of serious ROP at PCA range of 30.9 to 46.3 weeks and PNA range of 4.7 to 18.7 weeks . Our study found a PCA range of 29 to 44 weeks and PNA of 0 to 14.4 weeks in babies with pre-threshold “time window” through which the beginning of serious ROP could be detected. Table 6 presented a tabulation of the criteria recommended as guidelines for screening babies at risk for ROP and the means of this study. The changes through the years were evident. The data suggested that the mean AOG and BW of this study were within the criteria recommended by Gonzales et al. (2001: unpublished data) and those recommended by the joint statements of the AAO, AAP, AAPOS (2006)6 and the UKRCPCH (2008).12 The PNA range of 3.88 to 5.71 weeks between babies found to have IR (Table 4) and babies who were assessed to be in the earlier stages of ROP (Table 5) implied that the initial retina exam should be done between PNA of 4 to 6 weeks in order to intercept ROP at a time before laser treatment was needed or before more serious ROP was present. In summary, the means of this study were within the criteria used by Gonzales et al. which were in agreement with the joint statements of the AAP, AAP, AAPOS (2006)6 as well as with UKRCPCH(2008).12 Thus, babies born with AOG <32 weeks and birth weight <1,500 grams or babies born >32 weeks or >1,500 grams with “stormy” perinatal courses6,12 would need initial retinal exams by PNA of 4 weeks.