Disclaimer: The authors have no proprietary or financial interest in any product used or cited in this study.

Acute lymphocytic leukemia (ALL) is a hematologic malignancy with a propensity to involve extra-medullary organs which includes the eyes. Though uncommon, leukemic infiltrative optic neuropathy is a potentially blinding condition and warrants urgent treatment. There are no well-established treatment protocols for this complication hence management largely depends on published case series. Radiotherapy has been the more common method in dealing with this rare condition as leukemic cells are radiosensitive while the optic nerve is considered to be relatively insensitive to radiation therapy.1

This report describes a rare pediatric case of bilateral tumor cell infiltration of the optic nerve head secondary to ALL treated with external beam irradiation.

A 13-year old female diagnosed ALL confirmed by bone marrow biopsy consulted due to a 4-month history of gradually progressive blurring of vision of the right eye accompanied by scotoma and photopsias. Symptoms started 8 months after diagnosis of ALL while undergoing intensive intravenous (IV) chemotherapy with vincristine, mercaptopurine, and intrathecal methotrexate. She is a grade 7 student, non-smoker and non-alcoholic beverage drinker. Physical examination was essentially normal except for generalized pallor and presence of cervical lymphadenopathies. 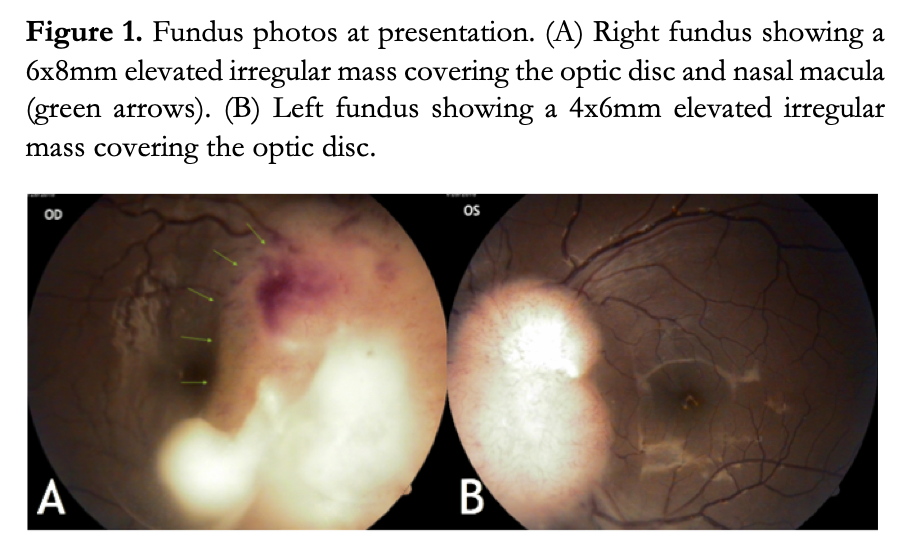 Magnetic resonance imaging (MRI) of the brain and orbit showed no other abnormalities or evidence of infiltration elsewhere (Figure 2). Cytologic analysis of the cerebrospinal fluid did not show any abnormal cells or blasts. 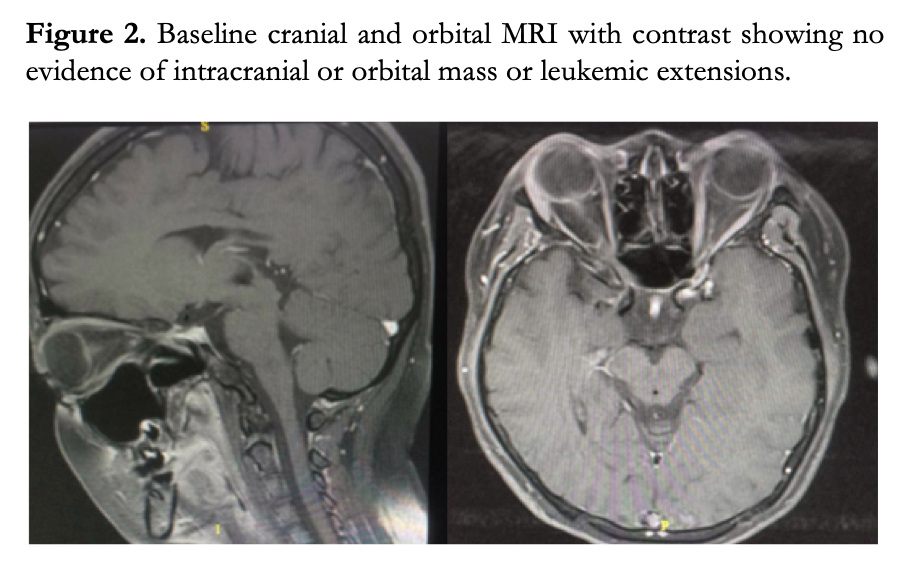 The patient underwent whole brain external beam irradiation to include the posterior half of both orbits spread over 12 treatment days at 250 cGy per day for a total dose of 3,000 cGy. The entire protocol was completed and well tolerated by the patient with no note of any significant systemic or ocular adverse effects..

Four months after treatment, there was significant reduction in both tumor bulk with the optic nerve heads now visible (Figures 3 & 4). Telangiectatic and tortuous vessels were also markedly diminished. Visual acuity improved to 20/80 OD and 20/20 OS. No cataracts, retinal atrophy, ocular surface problems, or any periocular disease secondary to the radiation therapy were noted until last follow-up. 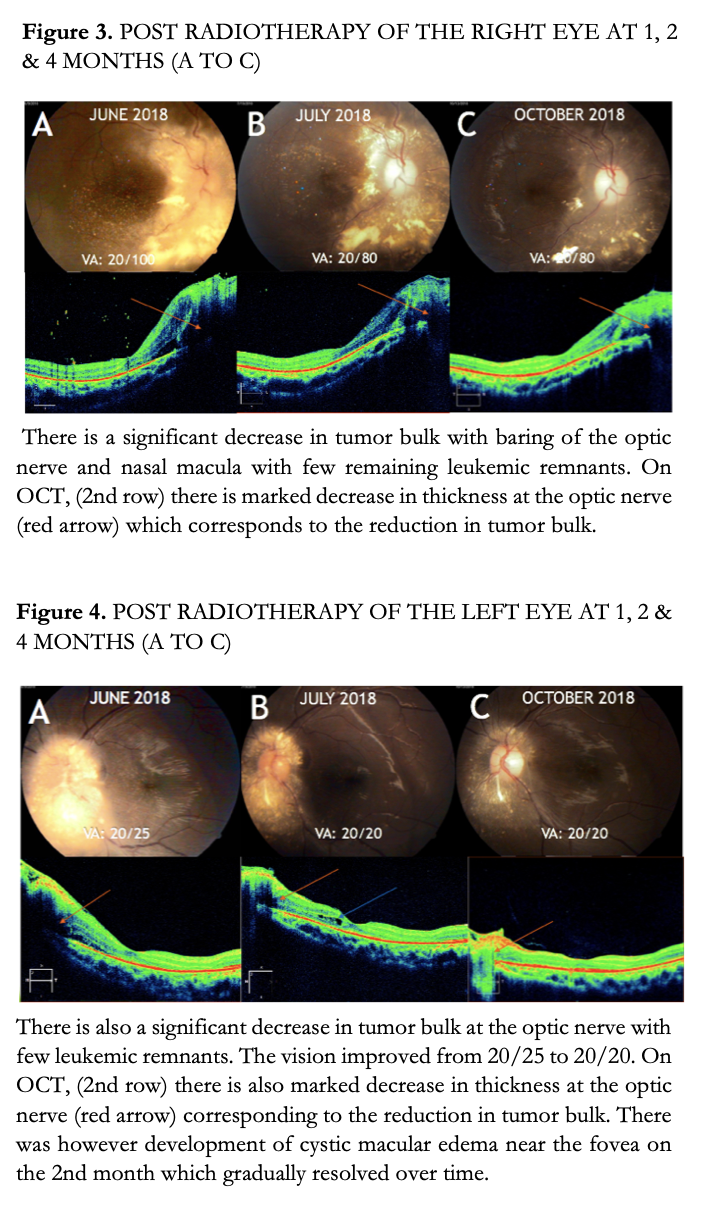 The most common malignant disease in the pediatric age group is Acute Lymphoblastic Leukemia. 5-year survival rate is markedly reduced from 90% if diagnosed early or at < 15 years of age to 75% if diagnosed older or from ages 15 to 19 years old. This highlights the importance of early detection and prompt diagnosis to the overall life expectancy. While technological advancements and breakthroughs in both diagnosis and treatment have resulted to a desirable increase in life expectancy, these have led to a corresponding rise in leukemia-related adverse events. It is therefore important to adequately address these complications to improve the quality of life for these already vulnerable group of patients.

While the mainstay for treatment for ALL remains to be a combination of systemic and intrathecal chemotherapeutic drugs, these modalities cannot be extended for leukemic infiltration of the optic nerve. Two elements affect the relatively poor outcomes with the use of chemotherapeutic drugs: (1) the existence of a highly selective semipermeable border or the blood brain barrier which prevents systemically delivered drugs from reaching the optic nerve, and (2) mass effect of leukemic infiltrates in the optic nerve which interrupts the normal flow of cerebrospinal fluid within the cranial compartment rendering intrathecally administered drugs unable to reach the affected areas.3 Because of these limitations, radiotherapy has been the preferred method to treat this specific condition.

While leukemic cells are quite radiosensitive, the optic nerve is considered to be relatively insensitive to irradiation hence resistant to damage up to certain levels of radiation.8 This makes radiotherapy an ideal treatment option since it specifically targets tumor cells but, at the same time, preserving normal neural tissue. There is, however, some hesitancy in the aggressive use of radiotherapy partly because of unfamiliarity, especially to the ophthalmologist, as well as the potential risks of ocular toxicity not only to the optic nerve, but also to the retina, ocular surface, and the lens.10

In general, orbital irradiation is an accepted treatment modality for many types of superficial or deep ocular tumors which include leukemic infiltration of the optic nerve head. A usual 1-2 week course of 2000 cGy for prelaminar and retrolaminar involvement of the optic nerve may result to a notable improvement in both visual acuity and decrease in the amount of infiltration and mass effects.8 A report by Kaikov et al. involving two patients with leukemic optic nerve infiltration showed that prompt treatment with radiotherapy resulted to improved vision. While, significantly delaying irradiation by relying on systemic and intrathecal chemotherapy alone resulted to irreversible vision loss.2 In addition, focused radiotherapy of the optic nerve heads regardless of whole brain treatment may still show improvement in vision. According to Yigal et al., the most effective treatment approach, in addition to systemic chemotherapy, would be a combination of irradiation and intrathecal chemotherapy. It is of note, however, that among the two, radiation would be the more valuable component of therapy.

While irradiation is effective, side-effects and therapy-associated complications will always be a concern whether in the immediate or long-term post-irradiation periods. Patients may experience acute periocular skin changes such as radiation dermatitis and madarosis, or late telangiectasia, skin atrophy and depigmentation. The ocular surface and the lacrimal glands may also be affected which can present as xerophthalmia, early conjunctival inflammation, and dry eye syndrome. Degenerative vascular changes and neovascularization may occur at the optic nerve or retina. A rare adverse effect of irradiation would be radiation optic neuropathy which can result to severe and irreversible damage to vision.2 One study involving 16 patients with leukemic optic nerve infiltration treated with irradiation therapy showed that 2 developed cataract and 4 had peri-ocular skin changes. However, all of the patients had essentially normal vision and there was no note of radiation retinopathy.2

Our patient demonstrated good visual and clinical outcomes following external beam radiation for bilateral optic nerve head infiltration secondary to ALL. Except for transient peripheral macular edema, no other ocular and extraocular complications were noted 4 months after irradiation. While early response was quite good, continued surveillance for the development of late complications is still necessary.

In summary, leukemic optic nerve infiltration represents a visual emergency. It is prudent that children with acute leukemia who present with ocular complaints should have an immediate ophthalmological assessment. Radiotherapy is a safe, well tolerated, and effective treatment modality and should be instituted before irreversible optic nerve damage occurs. Long-term side effects and the possibility of relapse should always be considered. A multidisciplinary team approach involving the oncologist, ophthalmologist, and hematologist are all essential for the successful management of ALL and its complications.