Disclaimer: The authors report no financial interest related to this study or any products described in this paper.

Cataract is the leading cause of reversible blindness in the world and is treated with surgical removal of the cataractous lens and replacement with an artificial intraocular lens (IOLs) to produce the best visual outcome possible.1,2,3 These IOLs were first introduced as monofocal lenses but soon evolved to include presbyopia correction such as multifocal, extended depth of focus, and accommodating IOLs. Although there are already a range of options, monofocal IOLs are still most widely used because of availability, cost, ease of use, and least associated photic phenomena.4,5,6 With the discovery of spherical aberration affecting vision, IOL designers integrated aspheric compensation to monofocal IOLs to further improve visual outcome.7

The concept of using an IOL to compensate for the spherical aberration of the cornea to improve optical performance was first introduced by Jack T. Holladay in 2002.14 Two years later, the U.S. Food and Drug Administration approved the use of the first aspheric IOL, the Tecnis Z9000 IOL (Advanced Medical Optics, USA). Since then, there have been other aspheric IOLs developed and numerous studies comparing spherical and aspheric types of monofocal IOLs.15-33 Studies on spherical aberrations found in the literature favored aspheric IOL over the spheric types.15-26 However, comparisons on best-corrected visual acuity and contrast sensitivity between these types of IOLs were inconsistent.15-21,25-33 This may be due to different contrast sensitivity tests used and different pupil sizes. Patient satisfaction also did not show any differences between these IOLs.24,28,31 Some studies demonstrated that the incidence of posterior capsular opacity is lower in eyes with aspheric lenses compared to those with spheric IOLs. 34-36 In a local study done last 2008, while contrast sensitivity between spherical and aspherical IOLs were comparable, aspheric IOLs had lesser spherical aberration than spheric IOLs.37

We conducted a cross-sectional, comparative study comprising patients who had cataract extraction and IOL implantation in at least one eye with one of the following monofocal IOL: a negative aspheric IOL (Tecnis ZCB00- Johnson and Johnson, USA), a neutral aspheric IOL (EnVista MX60-Bausch & Lomb, USA), and a spherical IOL (Akreos Adapt Bausch & Lomb, USA). The study was approved by the local Ethics Review Committee and was conducted in accordance to the Declaration of Helsinki. Patients were recruited from April to July 2019. After obtaining informed consent, subjects underwent a series of eye tests and were asked to answer a questionnaire in one clinic visit.

Aside from acquiring the patients’ demographics (age, gender, follow-up in months), we performed a detailed ophthalmic examination with the examiner masked to the IOL type.

Patients who were binocularly implanted were asked to answer the National Eye Institute Refractive Error Quality of Life questionnaire (NEI-RQL) at the time of visit. Four relevant subscales measuring quality of vision were chosen which were: clarity of vision, diurnal fluctuations, far vision, and glare. The subscales were graphed and compared among the three types of IOLs.

Descriptive statistics was performed using 16.0 SPSS statistical software (IBM, New York, USA). Continuous variables such as age, time of follow up, spherical equivalent, visual acuity, contrast sensitivity, NEI-RQL results, total SA, internal SA, and higher order aberrations were presented as mean ± standard deviation. One-way analysis of variance (ANOVA) was used to determine whether there are any statistically significant differences among the means of the variables of the three IOL groups. A p-value of less than 0.05 was considered statistically significant.

A comparison of the postoperative means of MRSE and BCVA among the three groups revealed no statistically significant differences (Table 2). 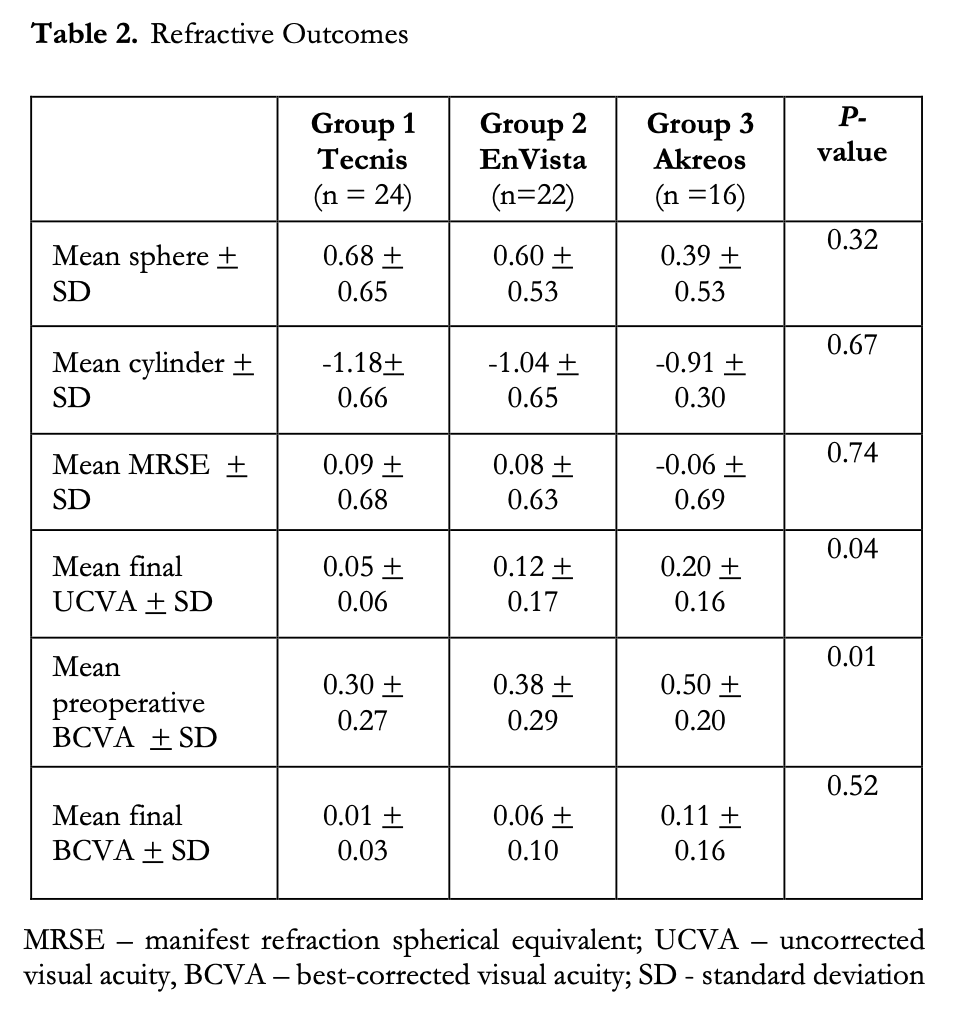 The internal SA is a direct measurement of the aspheric property of the actual intraocular lens. The mean internal SA of group 1, 2 and 3 were -0.150, +0.022 and +0.094 μm respectively. The total SA and the total higher order aberration were likewise lowest in group 1 (Table 3).

Photopic contrast sensitivity without (Figure 1) and with glare (Figure 2) testing revealed no statistical differences. However, contrast sensitivity score was significantly worst in group 3 in mesopic vision compared to groups 1 and 2 particularly at the 6 cpd with and without glare (P=0.04 and P=0.01 respectively, Figure 3) and at 12 cpd without glare (P=0.01, Figure 4). 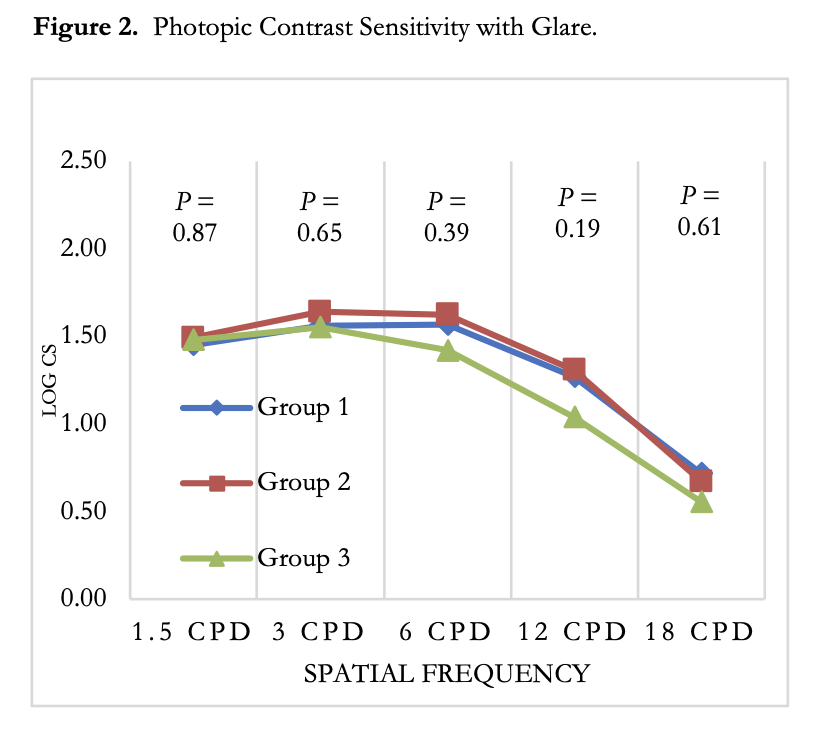 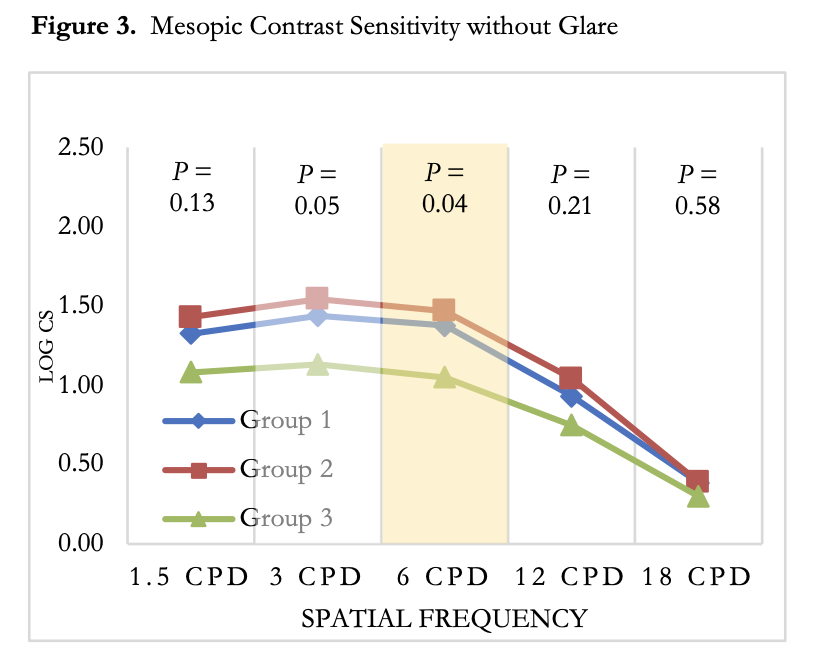 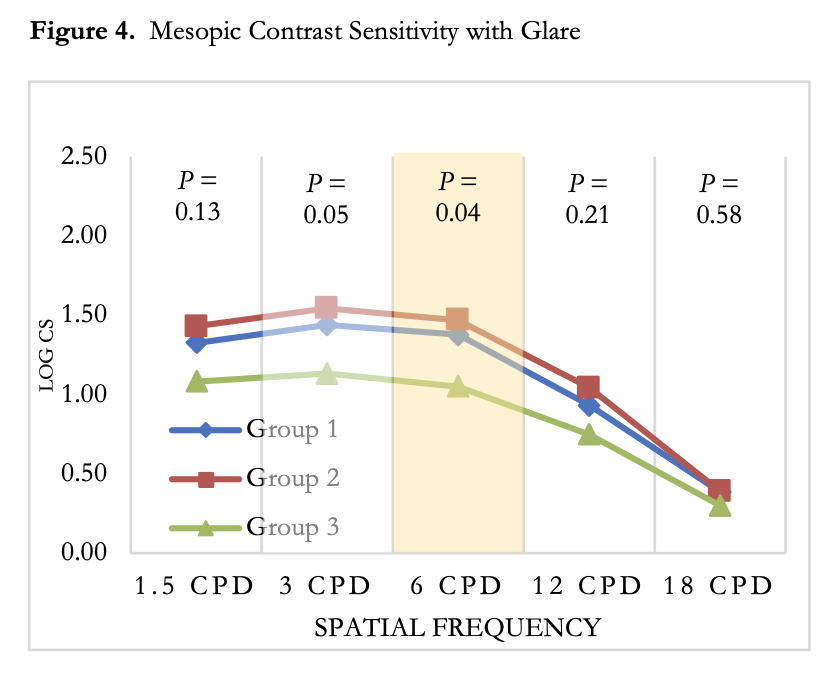 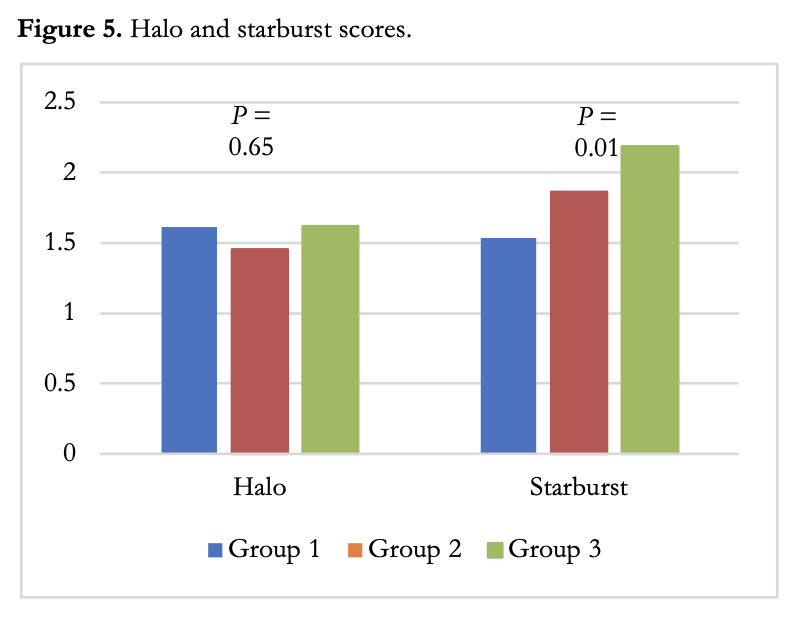 Postoperative NEI-RQL questionnaire was completed by 10 subjects in group 1, 9 in group 2, and 7 in group 3. Results revealed no statistically significant differences among the three groups (Figure 6). 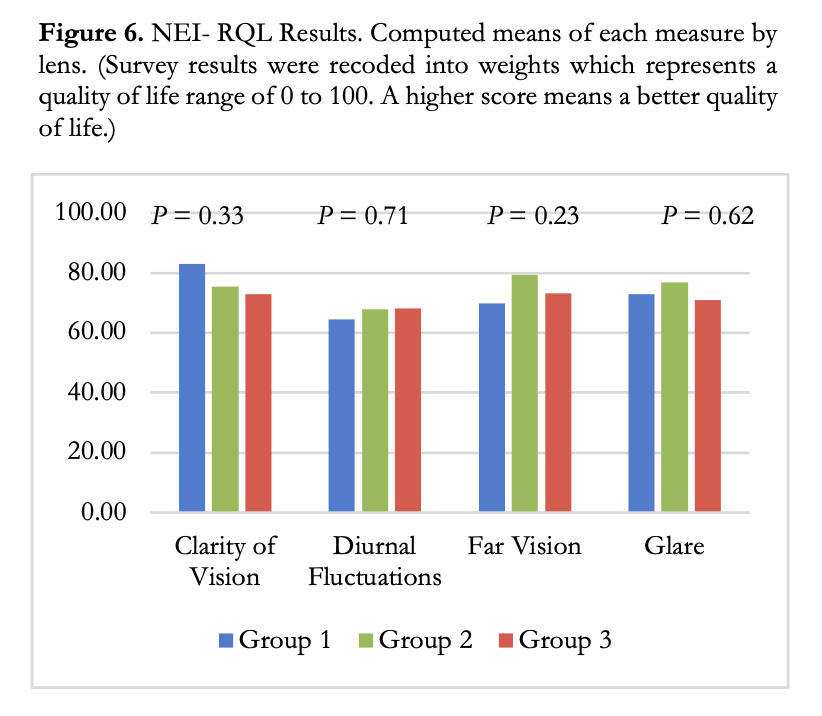 The correction of SA using wavefront technology is used in laser corneal refractive surgery and is called aspheric or optimized laser assisted in situ keratomileusis (LASIK) treatment. Ang et al. reported that as the excimer laser corrected more myopia, there was a corresponding increase in positive spherical aberration.39 Therefore, the aspheric or optimized LASIK algorithms not only corrected refractive error to target emmetropia, but additional laser pulses were added in the peripheral optical zone to counteract the induction of positive spherical aberration in myopic LASIK. This innovation improved mesopic contrast sensitivity and improved the quality of vision especially in dim light or large pupil situations.39

The concept of aspheric optics was likewise applied onto IOLs technology. Initially, only conventional spherical IOLs were being manufactured, but learnings on wavefront optics were used to design IOLs which incorporated spherical aberration compensation (negative or neutral asphericity) such as the Tecnis ZCB00 and the EnVista MX60.

The Tecnis IOL emerged after evidence that the overall or total SA of the eye increases as it ages. This is probably due to degenerative changes in the lens as the cataract develops, turning the internal SA to more positive. When the cataract is removed and a Tecnis IOL implanted into the eye, the modified prolate anterior surface of the Tecnis produces a projected -0.27 μm SA which neutralizes the +0.27 μm SA of the cornea, reducing the total SA of the entire optical system (cornea + lens) to near zero levels, theoretically increasing its visual performance as seen in studies on better night-driving tests.40 Consequently, studies have supported this observation showing greater contrast sensitivity results particularly in mesopic vision compared to other spherical and aspherical IOLs.40

The EnVista MX60 IOL is a single-piece hydrophobic IOL with a posterior square-edged design IOL and is designed to be aspherically neutral (0.00 μm SA). The Tecnis was designed to have gradually different powers from the center to the periphery of the lens resulting in its negative aspheric properties; whereas, the EnVista has the same neutral asphericity from center to periphery of the IOL. The EnVista was demonstrated to be insensitive to tilt and decentration because of this uniform distribution.38 With the EnVista being neutral or zero in internal SA and combined with the +0.27 μm SA of the cornea, the entire optical system retains a mildly positive spherical aberration. Several studies have shown that retaining a mildly positive SA has favorable effects of improving depth of field.23,41

The iTrace aberrometer allows wavefront and corneal topography to be taken at the same line of sight to produce actual values to measure the optics of the entire eye. This is different from the traditional Hartman-Shack aberrometer wherein the machine sends only one beam of light directed toward the pupil and, by following the law of conjugate planes, would detect light reflected back and scattered from the retina outwards from the pupil to be detected by lenslets of the Hartman- Shack aberrometer. Some studies on aberrations used the combination of Atlas instrument (Carl Zeiss Meditec, Oberkochen, Germany) and Pentacam (Oculus Optikgerate GmbH, Wetzlar, Germany).42 Results of our study with regard to spherical aberrations are very consistent with the results of other studies employing other machines.16,25 The mean internal SA in our study shows the negative aspheric Tecnis IOL with -0.150 μm, followed by the neutral aspheric EnVista MX60 with +0.022 μm, and the Akreos Adapt with +0.094 μm. The asphericity of the Tecnis IOL in our study is capable of closely negating the corneal SA of a 5mm pupil which is found to be +0.14 μm in a study by Petermerier et al. using the Ocular Wavefront Analyzer.43 Shentu et al. showed the mean SA of Tecnis to be +0.022 um using the OPD-Scan ARK 10000 aberrometer.16 While, Tzelikis reported +0.012 μm with a 5 mm pupil of a negative aspheric lens.25

Differences in the means of MRSE and final BCVA among the three IOLs were not significant in our study. This is consistent with the study of Sandoval et al.44 However, some studies concluded that corrected distance visual acuity favored the spheric type over the aspheric IOL.28,45 While a study by Vlasák favored aspheric IOLs over the spheric IOL.42 The reason for the differences in results may point to other factors that confound vision, but it is in our understanding that refractive outcome and best-corrected vision should not be affected by asphericity. It is the quality of vision metrics such as contrast sensitivity and photic phenomena that are more affected by spherical aberration.

Photic symptoms can be measured through a glarometer. In this study, we used the Siepser Glarometer to discern if there are differences among the three IOLs. Although in the literature, there are no published studies comparing photic symptoms between aspheric and spheric IOLs, we believe that this is an essential measure to differentiate quality of vision.5,6 Our study revealed significant differences in starburst favoring aspheric IOLs over the spheric Akreos Adapt. Perception of haloes among the three IOLs, however, was similar.

There are limited studies in the literature that used the NEI-RQL questionnaire as a guide for patient-reported outcomes when comparing monofocal spherical and aspheric IOLs. A study done by Lin et al. concluded that no significant differences in quality of life was noted between spheric and negative aspheric IOLs.24 Our study findings are in agreement with theirs.

Our study looked at spherical aberration as the main advantage of aspheric IOLs over spherical IOLs and demonstrated the effect of SA on contrast sensitivity and measure of photic symptoms. Still, it is important to note that patient- reported outcomes generated insignificant differences. There are two possible reasons for this. First, patients with cataracts are coming from a reference point of poor vision and any type of IOL would represent significant improvement. They would never know the difference between better contrast or less halo and starburst. The second reason is pupil size. According to a study by Guillon, pupil size decreases with increasing age and established presbyopes aged 55 and up have a pupil diameter of 3.58 mm.47 The population of our study has a mean age of 65, 67 and 78 years for the Tecnis, Envista, and Akreos groups, respectively. In addition, our study measured the aberrations in a 5mm pharmacologically dilated pupil without taking to account the patient’s physiological pupil size at photopic and mesopic conditions. Evidence has shown that aberrations become more visually significant in eyes with large pupils or in dim light conditions thus considerable amounts of higher order aberration only start at the 3mm pupil size.48 This may explain why our population do not notice the benefits of aspheric lenses when they answer the questionnaire.

Our study has several limitations. Pupil size plays a significant role on aberration and its effects on vision. Recruiting equal numbers of patients with mesopic pupil size below and above 3 mm may produce more insightful differences among the lenses compared and may provide explanations to the results of the answered questionnaires. Another limitation is that it was difficult to demonstrate differences between the two aspheric IOLs. The theoretical advantage of a negative aspheric lens is sharper contrast vision, while the theoretical advantage of neutral aspheric lens is depth of field and less sensitivity to tilt and decentration.49-51 A future study comparing the negative aspheric and neutral aspheric IOL should include contrast vision (i.e. reading charts with different contrast levels such as 10%, 25% contrast), defocus curve testing, and tilt and decentration imaging. These tests may bring out more differences between these two types of aspheric IOLs.

In conclusion, negative aspheric and neutral aspheric IOLs had significantly better contrast sensitivity and less starburst than a spherical IOL. However, refractive and visual outcomes and patient satisfaction were similar among the three groups of monofocal IOLs.