Comparison of the In-Vitro Effects of Bevacizumab, Mitomycin-C, 5-Fluorouracil, and Triamcinolone Acetonide on the Viability of Cultured Human Tenon’s Fibroblasts

Trabeculectomy, the most common glaucoma surgery performed, seeks to achieve incomplete healing to allow aqueous humor to escape the eye. 1 The most common reason for failure of this procedure is the development of fibrosis in the conjunctiva and episclera because of progressive fibroblast proliferation and collagen deposition at the site of the filtration bleb. 2,3

The application of antifibrotic agents, such as mitomycin-C (MMC) and 5-fluorouracil (5- FU), has been shown to increase the success rates of trabeculectomy, either as an intraoperative or postoperative adjunct. 1,4-11 However, the use of these agents has been reported to increase the rate of potentially sight-threatening postoperative compli – cations, such as ocular hypotony, suprachoroidal hemorrhage, conjunctival necrosis of the filtering bleb, and end o p h thalmitis. 12 Thus, alternative anti – fibrotic agents with a better safety profile are being investigated. 4,13-1

Intraoperative and postoperative periocular steroids have been used to improve trabeculectomy outcome but studies showed them to be inadequate. 17-19

Bevacizumab (Avastin), a recombinant humanized monoclonal antibody directed against vascular endothelial growth factor (VEGF), was shown to have an intrinsic property of inhibiting fibroblast proliferation in vitro and delays wound healing.20-22 Subconjunctival injection of bevacizumab as an intraoperative or postoperative adjunct in trabeculectomy with mitomycin-C resulted in a better outcome in animal studies and was reported to have a positive effect on bleb morphology in case series.23-26 However, it is unclear whether the success of bevacizumab in trabeculectomy is due to its direct effect on fibroblasts or simply because of its anti-angiogenic property.

This study determined the effects of bevacizumab, MMC, 5-FU, and triamcinolone acetonide (TA) on cultured human Tenon’s fibroblast (cHTF). The effects of these agents on the viability of cHTF using resazurin assay were compared and the half-maximum inhibitory concentration (IC50) of the agent(s) that showed a significant decrease in HTF cell viability was determined.

Tissue Collection
Subconjunctival Tenon’s capsule was isolated during extracapsular cataract extraction and pterygium excision with conjunctival autograft at the graft donor site from 21 patients without previous history of ocular surgery. Institutional ethics review board approval was granted and written informed consent was obtained from all patients. HTFs were propagated from the explants. Tissues obtained were placed in a cylinder containing 25 mL of Roswell Park Memorial Institute (RPMI) culture media (Sigma Aldrich, St. Louis Missouri, USA) and stored in a refrigerator in the Research Biotechnology Division within 12 hours from time of collection.

Establishment of Primary culture
Tissue explants were placed at the bottom of a six-well plate (BD Falcon, New Jersey, USA), covered with a sterile coverslip, and overlaid in RPMI media. Tissues were incubated at 37°C with 5% CO2 to allow for fibroblast cell growth in RPMI media, supplemented with penicillin 100,000 U/L and streptomycin 10 mL/L (Life Technologies, Carlsbad, California, USA). 10% fetal bovine serum (FBS) (Life Technologies, Carlsbad, USA) was supplemented for propagation of the fibroblasts. Explants were removed when adequate cell density was obtained and the void replaced by proliferating cells. After further cell growth, cells were trypsinized with 0.5 mL of 0.05% trypsin with 53 mM EDTA. Replating into multiple 175 cm2 flasks (BD Falcon, New Jersey, USA) for the first passage at a cell density of 105 cells per well was done. Third passage cells were used for all experiments. Homogeneities of the cell cultures were assessed by phase contrast microscopy (Figure 1). Pre-treatment cell counting was done using a hemocytometer (Hausser Scientific, USA). Cells were separated into a control and experimental drug groups. 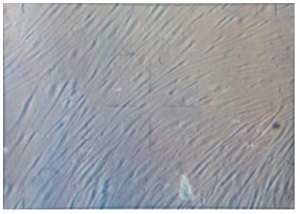 Plating of fibroblast cells in 144 well plates (BD Falcon USA) was done at a density of 2 x 105 cells per well + 20% FBS, letting cells attach and proliferate for 72 hours to become 80% confluent. All experiments were done in 5 replicates (1 for the control and 4 for the experimental groups). The negative control contained 100 µl of RPMI. The experimental groups consisted of wells treated with MMC (Zuellig Pharma, Makati, Philippines), 5-FU (Korea United Pharm, Chungnam, Korea), bevacizumab (Roche Diagnostics GmbH, Mannheim, Germany), and TA (L.B.S. Laboratory, Bangkok Thailand) at 3-fold decreasing concentrations starting from 20 ug, 5 mg, 2.5 mg, and 4 mg respectively. Pure MMC, 5-FU, bevacizumab, and TA were also placed in wells. The plates were incubated at 37°C in a humidified incubator at 5% CO2 for 24 hours.

The resazurin assay was used to determine the viability of the HTF. It is a simple, rapid, efficient, reliable, sensitive, safe, and cost effective tool for assessment of mammalian cell cytotoxicity.27-29 This fluorimetric assay quantifies the number of metabolically active cells based on the reduction of resazurin (blue and nonfluorescent) to resorufin (pink and highly fluorescent). The assay was performed according to the manufacturer’s instructions (Resazurin sodium salt, Sigma-Aldrich, St. Louis Missouri, USA). Resazurin 10% was added to each well. Plates were incubated in a 5% CO2 incubator at 370C for 14 hours. Fluorescence of samples, the main outcome measure of this study, was read spectrophotometrically using an ELISA plate reader (Synergy H4 Biotek, USA) at 595nm (Figure 2). IC50 was calculated using the prism software (GraphPad Software Inc., California) on agents shown to significantly decrease fibroblast cell viability. 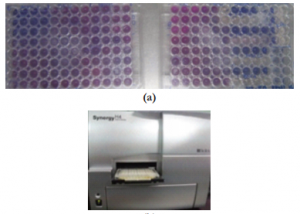 Each experiment was performed with at least 4 replicates per treatment group. Data was assumed to follow a normal distribution. Differences between 2 data points were analyzed using the paired t-test and between 3 or more data points by ANOVA, followed by Dunnett T3 post test. A p≤0.05 was considered statistically significant. Microsoft Excel software (version 2011) was used for the analyses. 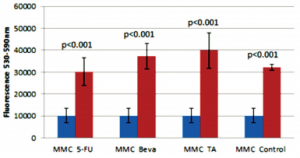 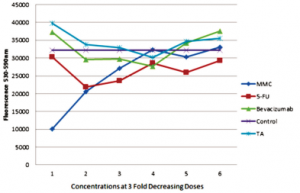 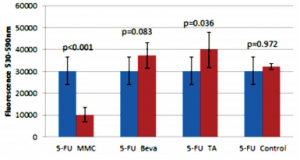 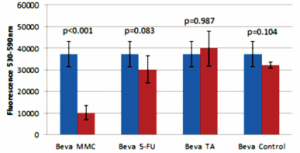 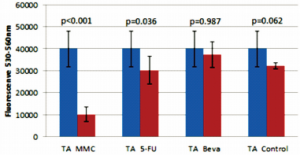 The use of mitomycin-C (MMC), 5-fluorouracil (5-FU), triamcinolone acetonide (TA), and beva cizumab (Beva) in trabeculectomy have been shown to improve outcomes of this procedure, whether used intraoperatively5,8,9,17,18,30,31 and/or as a postoperative adjunct bleb needling.6,11,24,32 MCC and 5-FU are the 2 most commonly used adjunctive agents in trabeculectomy. They both control subconjunctival fibrosis but their use has been associated with potentially blinding complications.1,33,34

Hogewind and coworkers used TA as an antifibrotic adjunct in glaucoma filtering surgery and suggested that it was as effective as MMC.18 However, our findings did not show an effect of TA on cHTF. It is possible that its success as an adjunct in trabeculectomy was due to its anti-inflammatory property rather than a direct effect on HTF. Although the TA and 5-FU groups did not show any significant difference in cell viability compared to the control, there was a significant difference between the TA and 5-FU groups, wherein the former had higher amount of viable cells (higher fluorescence) compared to the latter (Figure 7). Interestingly, an in-vitro study on dermal fibroblast showed that TA increased basic fibroblast growth factor.35

Vascular endothelial growth factor (VEGF) was noted to be increased in the aqueous humor of non-neovascular glaucoma patients and stimulated fibroblast proliferation.36 Bevacizumab, an anti-VEGF, has been utilized in glaucoma as a wound-healing modulator due to its direct effect on decreasing vascular proliferation,37-40 but recent studies showed that it has an intrinsic effect on HTF.22 A study by Memarzadeh23 on bleb morphology in rabbits after trabeculectomy noted that bevacizumab prolonged bleb survival and led to more favorable bleb morphology compared to 5-FU and control (balanced salt solution) groups. A report by Mathew and Barton stated that it was unlikely that bevacizumab alone would be as effective as MMC although there were no direct comparative studies done.20 An in-vitro study by O’Neill demonstrated that bevacizumab, at a higher dose of 7.5 mg than the standard of 1.25 mg, had significant cytotoxic effects on HTF. However, a paradoxical increase in the proliferation of fibroblasts was observed with a lower dose (2.5 mg) of bevacizumab.22 These findings were consistent with our results that bevacizumab did not cause a decrease in fibroblast cell viability.

Our study showed that mitomycin-C was the only agent used that significantly decreased HTF cell viability. This supported the clinical studies showing the superiority of MMC over 5-FU in achieving lower pressures after trabeculectomy, most probably due to its antifibrotic effect.5,8,41-43

The findings of this study provided further basic evidence supporting the effectiveness of MMC as an antifibrotic agent. To our knowledge, this is the first study to establish the IC50 for MMC which was computed at 12 ug. This supported the use of the lower end of the recommended dose range for intraoperative application of MMC which was 20 ug to 40 ug.44,45

The limitation of this study was that it assessed HTF viability exclusively and did not evaluate HTF morphology, contractility, proliferation, and cell death.

In summary, mitomycin-C demonstrated a significant dose-dependent decrease in cultured human Tenon’s fibroblast (cHTF) viability in vitro and its IC50 was computed at 12 ug. Bevacizumab, 5-FU, and TA did not have any significant effect on cHTF viability. Future studies to be done should compare the effects of these agents on the morphology, proliferation rate, and cell death of HTF. In addition, studies evaluating the effect of MMC contact time with fibroblasts in vitro may be of value in determining the minimum amount of intraoperative exposure required to achieve a significant effect on the target cells.

43. Anand N, Khan A. Long-term outcomes of needle revision of trabeculectomy blebs with mitomycin-C and 5-fluorouracil: a comparative safety and efficacy report. J Gla u c o m a 2009;18:513–20.