MODERN cataract surgery has advanced extensively, its aims no longer limited to the removal of the cataractous lens but extending to the improvement of vision through implantation of intraocular lenses (IOLs). Studies have shown that in a young eye without cataract, the cornea exerts a positive spherical aberration (SA) while the natural lens exerts a negative SA.

These tend to cancel each other out, producing a clear retinal image. With increasing age, however, the compensation afforded by the crystalline lens is gradually lost with the development of cataract, leading to an increase in total ocular higherorder aberrations (HOA). Implantation of a spherical IOL has been the standard in phacoemulsification surgery. Spherical lenses provide good vision but have been shown to induce positive SA, yielding poorer image quality by decreasing contrast sensitivity. Aspheric lenses, such as the IQ lens (Alcon Laboratories, Fort Worth, TX, USA) were developed to lower spherical and total HOA of the optical system. The Alcon IQ lens incorporates a –0.20 µm SA that is presumed to offset the +0.20 µm SA of the cornea, resulting in neutral or significantly lower SA. Correcting the cornea’s positive SA has been shown to improve contrast sensitivity. This study compared the quality of vision and SA in eyes implanted with the Alcon Natural and the Alcon IQ aspheric IOL.

METHODOLOGY
Twenty-two patients with bilateral cataracts seen from October 2006 to April 2007 were recruited for a prospective, comparative, randomized, subject-masked clinical trial in a single center. Included in the study were patients 45 years old and above with bilateral cataracts willing to undergo phacoemulsification with IOL implantation in both eyes. Their high-contrast best spectacle-corrected or potential-acuity-meter-tested vision should be at least 20/40 in both eyes. Patients were excluded if they had any of the following in either eye: greater than +3 brunescent cataracts, astigmatism greater than 1.50D detected by manifest refraction or corneal topography, increased intraocular pressure (IOP), narrow angles or diagnosed with glaucoma, symptomatic ocular-surface pathology such as dry eye, abnormal corneal topography (keratoconus), iris abnormalities, specular microscopy count less than 1,200 cells/mm2 , unstable zonules manifested by phacodonesis or pseudoexfoliation, history of traumatic eye injury, uveitis, ocular-muscle disorders, posterior-segment pathologies like diabetic retinopathy, and previous ocular or refractive surgery. Pregnant or lactating patients, those taking any form of steroids, patients with history of allergy to any medications used during and after phacoemulsification, those who had adverse events intraoperatively (i.e. vitreous loss or sulcusplaced IOL) or who developed increased IOP postoperatively were also excluded. Depending on the contact lens used, patients were advised to discontinue use at least 1 to 3 weeks before preoperative testing.

The following tests were performed 30 days preoperatively: uncorrected and best-corrected visual acuity (UCVA and BCVA) with manifest refraction using highcontrast chart, applanation tonometry, slitlamp examination, corneal topography (Orbscan version 3.14, Bausch and Lomb, Germany), pupillometry (dim-light pupil size, Zywave version 5.20, Bausch and Lomb, Germany), biometry by 2 technicians using a Quantel Axis II version 1.07 A-scan (Quantel Medical, France), specular microscopy (SP1000, Topcon, Japan), dilated aberrometry (Zywave version 5.20, Bausch and Lomb, Germany), potential-acuity meter (Marco Technologies, USA) and a dilated-retina examination. A randomization table was used to determine whether the Alcon Acrysof IQ or the Natural lens would be implanted in the first eye. The subjects were masked as to which IOL each eye received. The choice of IOL power was based on the surgeon’s previous experience with a desired target of emmetropia. Standard phacoemulsification was done by a single surgeon (RTA). The surgeries were performed under topical or retrobulbar anesthesia with sedation. After the procedure, appropriate topical antibiotic and steroid eye drops were administered at the discretion of the surgeon at a minimum duration of two weeks postoperatively. The second eye was operated within 2 weeks after the first operation.
The following tests were performed at 3 months postoperation: UCVA and BCVA with manifest refraction using high-contrast charts, contrast-sensitivity testing (photopic/daytime -85 cd/m2 and mesopic/nighttime -3 cd/m2 ) with and without glare using Optec 6500 (Stereo Optical Inc., Chicago, USA), slitlamp examination with IOP measurement, corneal topography, pupillometry (dim-light pupil size–Zywave readings), dilated aberrometry.
Postoperative visual perception was obtained by means of a questionnaire with a given score for each category. Distance vision during daytime, under normal lighting condition, and at night, including satisfaction in vision, were rated using the following scoring system: 5 = excellent, 4 = very good, 3 = average, 2 = poor, and 1 = bad. Symptoms of glare and haloes were rated at 5 = none, 4 = mild, 3 = moderate, 2 = marked, and 1 = severe. Higher mean scores implied better results whereas lower scores implied less satisfactory results. The mean score for each category was calculated and tested for significance. Visual acuities were reported in Snellen equivalents. Differences between groups were analyzed using pairedPHILIPPINE ACADEMY OF OPHTHALMOLOGY PHILIPP J OPHTHALMOL VOL 33 NO. 1 JANUARY – JUNE 2008 11 two-tailed t-test. A p value of <0.05 was considered statistically significant. The study protocol followed the Declaration of Helsinki and a written informed consent was obtained from each patient.

DISCUSSION
The mean UCVA, BCVA, and spherical equivalent were similar in the IQ and Natural groups in this study. Mean SA and HOA were, however, significantly lower in the IQ than in the Natural. Other studies have shown similar results, with a decrease in SA and HOA in aspheric lenses and improving the optical quality in pseudophakic patients. Contrast sensitivity was reportedly improved in both photopic and mesopic conditions. 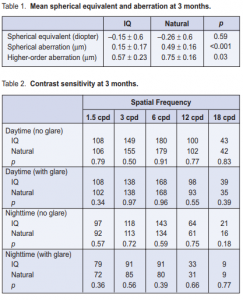 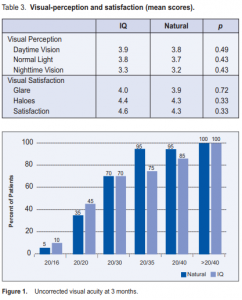 In this study, although the contrast-sensitivity scores under mesopic conditions with and without glare were higher in the IQ, the difference was not statistically significant. Clinically, the distance-vision perception of the patients under different lighting conditions and the visual-disturbances (glare, haloes) scores at 3 months were similar for both groups. In summary, eyes implanted with the IQ aspheric IOL have a significantly lower spherical and total higher-order aberration compared to eyes implanted with the spherical Natural lens. This could benefit patients who require better nighttime vision or who may have large pupils in dim-light situations. Increasing the study population may also make the results, particularly contrast-sensitivity studies, more statistically significant.