SYSTEMIC lupus erythematosus (SLE) is a chronic, immunologic disorder that affects multiple organ systems. It is characterized by hyperactivity of the immune system and prominent autoantibody production. The disease can manifest in many forms, ranging from mild cutaneous or joint involvement to more serious and lethal involvement of the kidney, heart, and brain. 1 The estimated incidence of SLE ranges from 1.8 to 20 cases per 100,000 per year. Almost 80 to 90% of SLE patients are women. The average age of onset is 30, with a range from infancy to old age. 1 The ten-year mortality in SLE is 71%. 2 Renal failure and septicemia are the main causes of death. 1 Diagnosis of SLE is arrived at if four or more of the following criteria are present: malar rash, discoid rash, photosensitivity, oral or nasopharyngeal ulcers, nonerosive arthritis, serositis, renal disorder, neurological disorder, hematological disorder, immunological disorder, and presence of antinuclear antibodies.
2 Patients with SLE may present with various systemic manifestations. The general symptoms include fever, malaise, arthralgia, myalgias, headache, and loss of appetite and weight. 2 Several ways of scoring disease activity have been proposed. The most widely used was introduced by Bombardier et al. in 1992. Systemic Lupus Erythematosus Disease Activity Index (SLEDAI) was developed to standardize outcome measures in SLE. Three indices that could adequately describe outcome (disease activity, damage from disease, and health status) were identified. Twenty-four variables were identified as important factors in a disease activity index, including clinical and laboratory findings, which were rated on a disease activity scale of 0 to 10 by 14 rheumatologists. This yielded a “weighted” index for 9 organ systems (the SLEDAI) as follows: 8 for central nervous and vascular systems; 4 for renal and musculoskeletal; 2 for serosal, dermal, and immunologic; and 1 for constitutional and hematologic. The maximum theoretical score is 105. SLE has no disease activity if the score is 0, mild to moderate if ≤ 10, and greater disease activity if >10. 3 Dysfunction in immune regulation plays a major role in the pathogenesis of SLE. Hyperactivity of B-cells, producing a spectrum of autoantibodies is mainly responsive to the immune dysregulation, although T-cells are involved as well. The tissue injury is caused by immune complexes, deposition of which induces cell infiltration and damage to the tissue by proteolytic and collagenolytic enzymes. Histopathology of affected tissues reveals vasculitis with fibrinoid necrosis and deposition of immunoglobulin and complement in small vessels and capillaries. 2 The ophthalmic manifestations of SLE range from lesions of the eyelid to sight-threatening disorders such as retinal vascular diseases and neuro-ophthalmic involvement. Keratoconjunctivitis sicca and lupus retinopathy are frequent.
4 Blindness is rare in SLE, and may be caused by retinopathy in severe cases. 5 Several studies on the ocular manifestations of SLE among Caucasians 1, 4 and Asians 6 have been done, but there are no data among Filipinos. This study determined the distribution of ophthalmologic manifestations of SLE in Filipino patients seen at the University of the Philippines-Philippine General Hospital (UP-PGH), and correlated these with disease activity.

METHODOLOGY
Consecutive patients who were newly diagnosed with SLE based on the criteria set by the American College of Rheumatology and patients with SLE who were being followed up by the Rheumatology Section of the Department of Medicine, University of the Philippines-Philippine General Hospital were recruited into the study from August 2002 to June 2003. The disease activity score (SLEDAI) was determined for each patient by the rheumatologists. The patients were referred to the UP-PGH Department of Ophthalmology and Visual Sciences for a comprehensive ocular examination consisting of (1) detailed ocular history, (2) best corrected visual acuity, (3) applanation tonometry, (4) gross examination, (5) extraocular muscle evaluation, (6) slit-lamp examination, (7) indirect ophthalmoscopy, (8) examination of the cornea and conjunctiva following installation of rose bengal stain in the conjunctival sac (9) Schirmer’s Test I, (10) gonioscopy and (11) color vision testing using the Ishihara’s Color Vision Chart (Kanehara, Tokyo, Japan). All patients with ocular manifestations were referred to the appropriate subspecialty and managed accordingly. Excluded from the study were patients who were incoherent and unable to complete the standardized ocular examination, those who had preexisting retinal lesions, and those who required examination under general anesthesia. Ocular findings in those with no disease activity, mild to moderate disease activity, and severe disease activity were compared using the chi-square test. 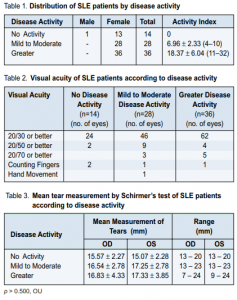 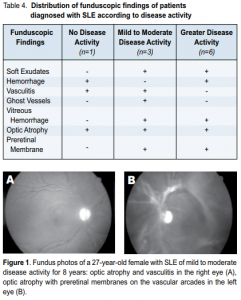 DISCUSSION
The prevalence of ocular manifestations in patients with SLE varies from one study to anothr. The most common ocular finding reported was dry eye. 6 In our study, however, only one patient exhibited dry eye, defined as an abnormal Schirmer’s test and positive rose bengal staining. Though keratoconjunctivitis sicca (KCS) or dry eye is strongly associated with HLA-DRW52 antigen and Anti-Ro (SSA) and Anti-La (SSB) antibodies, 1 there are no clinical studies to date establishing this association. Another way of establishing the presence of KCS is through lacrimal gland biopsy, but it was abandoned for being invasive. The correlation between corticosteroid and posterior subcapsular cataract (PSC) is well documented. 4 This occurs whether the corticosteroid administered is topical or systemic, but is more common with the latter. PSC development is related to duration of use, dosage, and patient susceptibility. In a study by Yap et al., 14 out of 70 patients diagnosed with SLE had PSC. 6 In this study, two patients with no disease activity had PSC and had used oral steroids for a mean period of 15.86 months. In the mild to moderate disease activity group, 6 patients had PSC and their mean duration of corticosteroid use was 20 months. In the greater disease activity group, four patients had PSC and their mean duration of oral corticosteroid use was 85 months. However, most patients with mild to moderate disease activity had longer oral steroid use (56 months average) than patients with greater disease activity (24.5 months). Overall, 12 (15.4%) out of 78 patients were found to have posterior subcapsular cataracts related to steroid use. Retinal involvement in SLE is a common ocular manifestation. A prospective clinical study showed that 88% of patients with lupus retinopathy had active disease. 4 The retina is often involved and the appearance and disappearance of retinal lesions parallel the course of the disease. Cotton-wool spots and retinal hemorrhages are the most frequently reported findings. 5 Other findings include retinal edema, hard exudates, microaneurysms, arterial narrowing, venous engorgement, and vascular thrombosis. Retinopathy is believed to reflect vascular damage from vasculitis or thromboembolism. Hemorrhages may be caused by vasculitis, thromboembolism, or hypertension. Pathological examination of cotton-wool spots discloses disciform thickening of the retinal nerve fiber layer. 7 Vasculitis and microaneurysm of the retinal arteries may cause destruction of the vessel walls or nerve fiber layer or both, resulting in the formation of cotton wool spots. In this study, exudates in the form of cotton wool spots were seen mostly in patients with greater disease activity. This is consistent with other studies 5, 7 where vasculitis, hemorrhages, and vitreous hemorrhage predominate. Preretinal membranes that might be evidence of proliferative lupus retinopathy were seen in this study. Vitreous hemorrhage, which is usually seen in cases with proliferative lupus retinopathy, was present in 2 eyes. This is believed to be due to retinal neovascularization secondary to severe retinal ischemia. 5, 8 Optic atrophy was present in 5 eyes in 3 patients, 1 patient from each group. Direct involvement of the optic nerve may occur as acute retrobulbar neuritis, acute anterior optic neuropathy, or anterior ischemic neuropathy. Both optic neuropathy and retinal occlusive disease may result in optic atrophy, the latter being the more plausible explanation on the prevalence of optic atrophy in this study. Reported retrochiasmal visual problems in lupus include geniculocalcarine blindness, homonymous hemianopsia, visual hallucinations and transient amaurosis. 4 These neuro-ophthalmologic findings were not evident in this study. Glaucoma is a known complication of corticosteroid treatment. Systemic corticosteroid may cause a rise in IOP in some individuals. In this study, one patient had elevated IOP in both eyes attributed to corticosteroid use. No study is available on the direct relationship of SLE with the trabeculum or ciliary body. Ocular symptoms and findings are not currently part of the diagnostic criteria of SLE. Since the mortality rate is high, it is important that ophthalmologists recognize patients with SLE so that they could be properly treated and monitored. Rheumatologists and other specialists must not ignore ocular manifestations of SLE in the diagnosis and monitoring of disease activity. In summary, systemic lupus erythematosus is a chronic immunologic disorder that may affect multiple organ systems. The most common ocular manifestation found among Filipinos diagnosed with SLE was lupus retinopathy, occurring in 10 (12.8%)of 78 patients seen. Sixty percent of this occurred in patients with greater disease activity. Optic atrophy occurred in 3 (3.8%) out of 78 patients and retinal vaso-occlusive disease was the probable etiology. Twelve (15.38%) out of 78 patients had posterior subcapsular cataracts, 6 of whom had mild to moderate disease activity. Less common ocular findings were glaucoma, periorbital edema, and keratoconjunctivitis sicca.