Use of hollow polymethylmethacrylate as an orbital implant

THE SEARCH for the ideal eye implant for anophthalmic sockets continues notwithstanding the availability of orbital implants for years. Size, shape, composition, and cost determine the ideal type of implant. It must approximate the normal eye, resemble the globe in shape, occupy the excess orbital volume, and compensate for the missing viscera. It must also be made of material that the body would not reject. In the Philippines, the solid acrylic implant is commonly used because of its low cost. A five-year survey of cases at the Plastic and Lacrimal Clinic of the Philippine General Hospital reported that the most common anophthalmic socket problems were socket contraction and implant extrusion (Pagkatipunan PN and Mangubat LR, Anophthalmic socket in the plastic and lacrimal clinic, Department of Ophthalmology and Visual Sciences-Philippine General Hospital, 1996). Surgical technique, infection, and type of implant used were the usual causes. A five-year survey of 2,775 cases found 110 (3.9%) socket problems with 11 cases of implant extrusion (Tecson JV and Mangubat LR, Plastic and lacrimal clinic: A fiveyear survey, Department of Ophthalmology and Visual Sciences-Philippine General Hospital, 2001).
Integrated implants such as hydroxyapatite (HA) and porous polyethylene (PPE) are preferred because they allow tissue ingrowth and are associated with low incidence of migration. But these cannot be used for immunocompromised patients or those who have infections because the pores may serve as nidus for infection. Nonintegrated implants such as solid silicone and polymethylmethacrylate (PMMA) have been widely used because of their inert properties and low cost. However, these are associated with a high incidence of extrusion and migration. To date, no randomized clinical trial has been conducted to evaluate the stability of the various nonintegrated implants. We hypothesized that for most cases of migration of noninegrated implants, weight may be a cause. A hollow implant would be expected to be more stable compared with a solid implant of the same size as it would be subjected to less gravitational force.

METHODOLOGY
Nito-Seiki Manufacturing Corporation (Baesa, Quezon City, Philippines) molded the hollow implant (Figure 1). Medical-grade PMMA powder was used to form halfspheres by plastic injection technique. Pairs of half-spheres were fused ultrasonically to form 20-mm hollow PMMA spheres. The physical properties of the hollow PMMA implant were tested by the Department of Science and Technology (Taguig, Metro Manila, Philippines). The following parameters were measured: water absorption, bulk density, hardness. The ultra structure of the implants was observed under scanning electron microscopy. The study complied with the protocol established in the Declaration of Helsinki and was approved by the bioethics committee of the University of the PhilippinesPhilippine General Hospital (UP-PGH). Study subjects seen consecutively at the Department of Ophthalmology and Visual Sciences of the PGH were selected based on the following inclusion criteria: male or female 18 years old or older with clinically diagnosed nonseeing eyes secondary to traumatic globe injuries, ruptured corneal ulcers, or staphyloma who were advised to undergo evisceration or enucleation with orbital implantation or reimplantation for extruded orbital implants. Patients were excluded from the study if their normal eye had an axial length of less than 21mm determined by A-scan or an intraoperative determination showed the socket would have difficulty accommodating a 20-mm implant. Subjects were randomly assigned into the control group, which received the solid acrylic implant, or the treatment group, which received the hollow PMMA implant.
All participants were interviewed and underwent a complete eye examination consisting of visual acuity assessment, gross orbital exam, extraocular muscle function, intraocular pressure (IOP) determination, funduscopy, and slit-lamp examination. The clinical diagnosis was recorded. The mean axial length (average of 3 measurements) of the fellow normal eye measured by A-scan was used to estimate the length of the affected eye. Prior to implantation, the orbital implant was weighed and its volume measured by water displacement. A standardized posterior sclerostomy and insertion of the 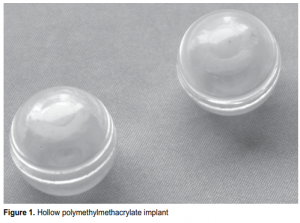 implant at the retrobulbar space were followed for evisceration. A three-layer closure of the Tenon’s capsule over the implant was performed for enucleation or reimplantation. Six surgeons performed the surgeries. All patients were given topical steroid antibiotic ointment. All underwent tarsorrhaphy, which was released after 1 week. Patients were followed up at 2 weeks, 6 weeks, and 12 weeks postoperatively for signs of infection, dehiscence, and migration.
Orbital (computed tomography)CT scan was performed the day following surgery and on the 12th week of follow-up. The implant was considered in place if it was not visible through the overlying conjunctiva, palpable within the center of the socket, and not obliterating the fornices. The distance between the orbital apex and posterior surface of the implant on axial cuts was measured to determine implant migration. A single blinded radiologist performed all measurements.

Tests done by the Industrial Technology Development Institute (ITDI) of the Department of Science and Technology (DOST, Reference No. MSD–0211-062) yielded the following physical properties of the hollow PMMA spheres compared with those of the solid acrylic: water absorption 0.65% versus 0.2%; bulk density, 1.19g/cm3 versus 0.57g/cm3 ; hardness, 71.2kg versus 92-100kg. Microstructure determination by Scanning Electron Microscopy showed ridges on both inner and outer surfaces of the hollow orbital PMMA implant.

At 6 weeks, 11 of 12 implants remained in the socket; 1 in the solid acrylic group extruded. At 12 weeks, only 7 patients (4 solid acrylic, 3 hollow PMMA) completed the follow-up, and all implants were in place. Results of orbital CT scan at 12 weeks follow-up are shown in Table 2. A migrating implant is one that has been displaced from its original position but has not yet extruded from the socket on eye exam.

There was 1 incidence each of wound infection, dehiscence, ptosis, and superior sulcus defect in the solid acrylic group, as well as 1 case each of conjunctivitis and ptosis in the hollow PMMA group.

DISCUSSION
In the design of orbital implants, several factors, namely size, shape, composition, weight, and volume, must be considered to minimize migration. An implant smaller than the volume of the affected eye yields a volume deficit and poor aesthetic results. This study showed that for eyeballs that have an axial length of at least 21.98mm by A-scan ultrasound, a 20mm implant can be placed. These results are consistent with the findings in a 2000 study, 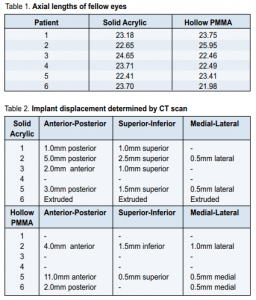 which showed that many anophthalmic sockets could accommodate implants of 22mm diameter or larger based on the axial length measurements of the fellow eye. 1 But there are no studies that correlate the size with implant migration. Implant shape also plays a role in the mechanics of the prosthesis. 1 It may be spherical or irregularly-shaped (pyramidal, 1 conical, 2 or egg-shaped 3 .) We used the traditional spherical shaped implants to simulate the shape of the eyeball. Orbital implants may be classified according to their composition. Nonintegrated implants have no apparatus for attachments of the extraocular muscles and therefore do not allow ingrowth of organic tissue. They have no direct attachments to the ocular prosthesis. Examples are those made from glass, 4 rubber, silicone, steel, gold, silver, acrylic, and PMMA. Integrated implants 5, 6, 7, 8, 9, 10, 11 have an apparatus for attaching extraocular muscles and allow ingrowth of fibrovascular tissue on its surface. 12, 13, 14 Examples are the porous polyethylene (PPE) 15, 16 and hydroxyapatite (HA) orbital implants that are nontoxic, nonallergenic and biocompatible materials made from salt of calcium phosphate. We used PMMA because of its inert properties, low cost, and long history of use as orbital implant. Weight and volume 17, 18 are also important. If the adult eye is assumed to have a spherical diameter of 24mm, the volume of the sphere is 7.2 mL (V = 4πr 3 /3). The average artificial eye has a volume of 2.5 mL. The volume of the orbital implant is the difference between the volume of the eye removed (7.2 mL) and the volume of the artificial eye or prosthesis (approximately 2.5 mL). An implant should therefore provide a volume of 4.7 mL. A spherical implant with such volume would have a diameter of 21 mm. Since the goal of implant insertion is volume replacement, only the implant’s volume and not its weight is needed to replace the enucleated globe. We used a lighter implant to avoid weight-related problems such as extrusion and implant migration due to gravity. One case of early implant extrusion in the solid acrylic group was seen on the third week following enucleation. This could have been due to incomplete Tenon’s closure. In the solid acrylic group, the implants migrated posteriorly in patients who underwent evisceration and anteriorly in those who had enucleation. Coronal cuts showed that the implants migrated supero-laterally. In the hollow PMMA group, no pattern was observed between the type of operation and the direction of the implant migration, possibly because the lighter weight of the implant made it more mobile inside the eye socket. Caution should be used when analyzing results of displacement based on CT scan. The values are measured in millimeters and the results may be affected by the position of the patient’s head during the scan and the size of cuts. Early wound dehiscence with threat of implant extrusion because of infection was seen in the solid acrylic group in a patient who underwent evisceration and whose preoperative diagnosis was panophthalmitis (Pseudomonas aeruginosa). First week postoperatively, purulent discharge with breakdown of tissues and exposure of the underlying sclera was seen. There was reepithelialization of the conjunctiva 2 weeks later and lower lid margin laxity on later follow-up. Patient was given oral cefuroxime for 1 week. Infection is less frequent with nonintegrated than integrated implants because of the lack of pores which act as areas for potential infection.19, 20, 21, 22 A case of postoperative viral conjunctivitis characterized by severe chemosis and prolapse of the conjunctiva was seen in the hollow PMMA group which was managed by cold compresses,
pressure patching, and repeat tarsorrhaphy. The implant did not extrude and no shortening of fornices was noted on last follow-up. Anterior granulomatous uveitis in the fellow eye of a patient in the hollow PMMA group occurred 8 weeks postoperatively and responded to topical steroids. Cases of mild ptosis were seen in each group and one case of superior sulcus defect in the solid acrylic group. These are commonly seen as late complications resulting from downward and anterior migration of the implant with deepening of the superior sulcus.15 The patients in both groups were satisfied with their prosthesis fit and no further surgical intervention was done. This study is limited by its small sample size and the short follow-up period, which could not establish the longterm stability of the hollow implant. Nevertheless, the study showed that hollow polymethylmethacrylate implants are comparable substitutes for solid acrylic implants with similar rates of complication. A larger sample size with longer follow-up period is needed to establish the long-term stability of the implant.